“With the polymer frames, these pistols are definitely on the light side of most .45 ACP pistols their size.”

Since its modest one-pistol beginning, Kahr Arms has been known for innovation and quality. The company’s first pistol, still part of its lineup, was the K9, a 9mm double-action-only (DAO) compact. The solid-steel, compact pistol looked and felt great in the hand, but some felt it had a single drawback—weight. Not that the K9 was really heavy, but its 9mm chambering and size seemed to beg for a polymer frame, dropping the weight by 8 ounces and making carriers happy. Years after the K9’s introduction at a 1995 industry trade show, Kahr started popping out polymer frames to satisfy the clamor.

I was impressed enough by the polymer versions that I bought the compact PM9, a perfect pocket gun, and put it in my pocket where it now rides every day. Carrying is where polymer frames shine!

By 2013, Kahr had expanded its line to include .380 ACP, 9mm, .40, and .45 ACP chamberings. The polymer lineup included pistols smaller and larger than the original K9 model in every caliber. When the .40 was introduced, I discovered the extra weight of a steel frame was a handling boon.

One of the defining characteristics of Kahr pistols is the barrel; its offset feed ramp is a major factor in the Kahr design. The offset barrel positions the trigger mechanism beside the barrel lug, raising the shooter’s hand closer to the bore axis, reducing barrel flip. Barrels arrive at the Kahr factory from Lothar Walther as drilled and rifled billets. Premium Series pistols have polygonal rifling while the Value Series has traditional rifling. Kahr’s CNC machining completes the barrel.

Kahr’s striker-fired pistols have a DAO trigger system, with the striker reset after each shot by the slide’s movement. (Pulling the smooth-faced trigger will not make the striker fall again.) There is no manual safety because the trigger system ensures a round cannot be fired unless the trigger is pulled.

The Kahr design contains a number of other notable features, including a 416 stainless steel slide—the slimmest in the industry—that’s CNC machined from bar stock, heat-treated and tempered. In the slide is a “self-cleaning extractor.” The slide stop is made of super-tough proprietary steel. Magazines are 400 Series stainless steel that is heat-treated and plasma welded.

When all is said and done, “Six U.S. Patents cover Kahr’s unique locking, firing, and extraction systems.” The grip angle is excellent on every Kahr I have handled, and the trigger moves smoothly to the rear without hitches.

One of my favorite calibers is the .45 ACP. Not because it’s a magic, zombie-stomping round, but because I have shot it in a variety of pistols since childhood. And, its nice that even if the bullet does not expand, there would still be a 0.45-inch-diameter bullet. I had always hoped Kahr would move into the .45 ACP, and it did!

When Kahr came out with its first .45 ACP pistols, I jumped in line to write about it. As with all Kahr pistols, the .45 ACP versions feel great in the hand. With the polymer frames, these pistols are definitely on the light side.

The four basic .45 ACP models built on a polymer frame include: the TP45, which, with 7+1 capacity, is the largest pistol in the line; the P45, the full-size version; the CW45, sized like the P45 with enough changes to make it the “value model;” and the PM45, which is about as compact as Kahr can get with a .45 ACP chambering. Premium Series pistols ship with three mags, a polymer case and optional night sights and blackening on the metal parts. The Value Series pistols ship with one mag and in a cardboard box.

The polymer frames for each .45 ACP Kahr model share all the same traits except size. The exterior of the frame, except grip area, has fine pebbling. A more aggressive pebbling is used on the grip panel area. Front and rear straps have effective checkering—grabbing the hand securely but not snagging clothing.

The slight swell on the backstrap adds to the frame’s ergonomics. As much material as possible is trimmed from the top of the backstrap where it meets the slide, raising the shooter’s hand closer to the bore axis. Generously sized, the triggerguard is slightly undercut for the same reason. A small stainless steel plate embedded in the dust cover wears the serial number.

Kahrs, in general, have trim, comfortable frames because of their single-column magazine design. Those on the .45 ACP models are no exception, measuring 0.99-inches in the grip area. The widest parts of these .45 ACP pistols are the slide lock (1.14 inches) and the extended magazine release (1.11 inches).

The slides have rear cocking serrations only, and the muzzle is gently beveled, easing the pistol’s insertion in a holster. About halfway up the side, slides are machined to narrow them more, resulting in a transverse demarcation line that adds visual appeal. The top of the slide is flat with dovetailed front and rear sights. The name “Kahr” and the model designation are laser etched on the pistol’s slide.

The largest in our group, wearing a 3.5-inch barrel, is the P45, though it is still not gargantuan by any means. It weighs in at 18.5 ounces sans magazine, with a slide a mere 1.01 inches wide and a 6+1 capacity. Length and height are 6.07 inches and 4.8 inches, respectively. Black metal front and rear sights, standard in white bar-dot configuration, can be drifted for windage.

For its size, the P45 has a lot going for it. It has excellent pointability. The sights go to point of aim easily, neither up nor down more than a fraction, and the extended magazine release with its thin frame (which is even narrowed around the release) allows my average-size hand to drop the magazine without changing grips. The beveled muzzle also made it easier to holster the pistol while keeping my head and eyes up.

However, compact as it may be, the P45 is not a pocket pistol with all clothing. I can slip it into the pocket of one brand of cargo/tactical pants but find the back of the butt peaking out in another. In dress slacks or blue jeans forget about it. As light as the P45 is, dropping it in a jacket pocket will change the hang of the jacket. With winter coats, however, hang is not really affected. Because of this, I think the P45 is more at home in an inside-the-waistband (IWB) holster.

If you’re looking for a pocket pistol, the PM45 might work better. The Kahr PM45 is to the P45 what the PM9 in my pocket is to the P9—miniaturized! Length and height are 5.79 inches and 4.49 inches, respectively. The PM45’s empty weight is 17.3 ounces. The slide’s reduction drops the barrel down to 3.24 inches. To save you finding a calculator, the dimension reduction is: 0.3 inches on the barrel, 0.28 inches in length, 0.31 inches in height and 1.2 ounces in weight. Capacity also drops from six rounds to five in the magazine.

Laying the P45 and PM45 pistols side by side, the PM45 looks like a hacksaw had its way with bigger brother. Luckily, the hacksaw bobbed the P45 in just the right ways. The full-size pistol has excellent balance, and, despite the amputations, the PM45 retains that balance and its pointability.

In a pocket or bag, or on the waist, these reductions improve things for the concealed carrier. Worn in an ouside-the-waistband (OWB) holster, the shorter slide will let less snout protrude below a covering garment. This also means less will protrude into the pants in an IWB rig. The PM45 uses shorter magazines but works with those from any other Kahr .45 ACP.

The Kahr CW45, and the Value Series in general, is billed as a more affordable option. Kahr’s CW45 is (almost) the spitting image of the P45. The general outline looks identical until you look closely at the slide. Kahr increased the traditionally rifled barrel’s length by 0.1 inches, which then translates to an overall length increase of 0.25 inches and a 1.2-ounce increase in the pistol’s weight.

Other visually identifiable modifications include the absence of the extra machining on the slide (no transverse line or reduction in the upper slide’s width), no dovetailed front sight and the name and model being rolled on the slide rather than laser engraved. While the CW45’s muzzle is tapered to aid when holstering, it has a different angle. Not visually identifiable is the typical metal front sight’s replacement with a polymer version.

The CW45’s slide stop lever is metal-injection-molded (MIM) not machined, a common practice in the industry. Kahr ships the CW45 with a single magazine in a cardboard box, not their signature plastic one. That completes the modifications Kahr made to reduce the pistol’s price. All modifications add up to a $322 reduction in price, with a magazine holding the same number of rounds as the P45. I could buy quite a bit of ammunition and magazines for that!

Fire In The Hole! 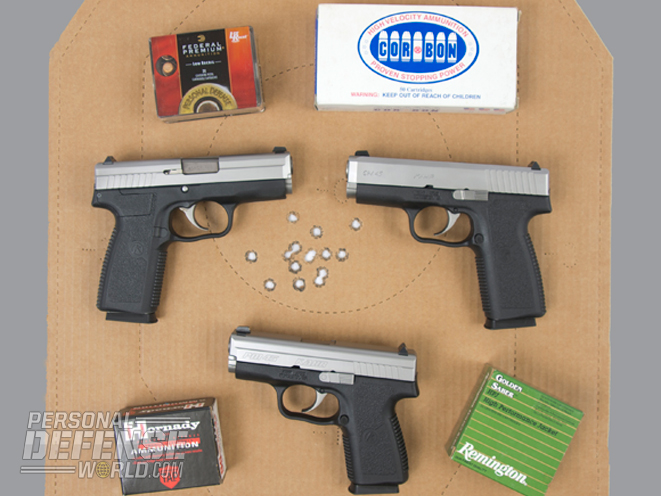 At the range I found the Kahr pistols handled as easily as I remembered. Triggers for the P45, CW45, and PM45 pistols (6, 7.25 and 5.25 pounds, respectively) were nicely smooth with a long reset. While not as smooth as a well-tuned revolver, they’re definitely some of the best in the industry.

Running through a few drills I found, as I had predicted, that the Kahr pistols left little to be desired. They were fast from the holster and fast between targets. If I did my part, the accuracy was there. These Kahr 45 pistols also rode well on the belt.

For law enforcement backup, concealed carry or security at home, it would be hard to beat this trio of .45 ACP Kahrs!