by Sean Utley
in Guns
0

“All direct impingement gas systems are not created equal and…PWS has ‘gassed’ its gun properly and delivered a product that is very enjoyable to shoot.”

Over the years, I’ve been exposed to several products from Primary Weapons Systems but, until now, had never actually fired any of them. Known for its innovative and durable long-stroke gas piston system, PWS continues to take its innovation into new territories. I find some irony in the fact that my first PWS evaluation is, of all things, the company’s direct impingement AR pistol, designated the DI-10P.

There are some very interesting developments associated with the PWS DI-10P aside from the obvious recent release of this pistol. A recent ATF letter, in response to a shooter’s question, sheds new light on the use of the Sig Sauer SB15 stabilizing brace, which happens to be included with your purchase of a PWS pistol. This ATF letter clearly states that shoulder firing a legally designated pistol equipped with a Sig brace is not illegal, and does not reclassify this 10-inch pistol as a short-barreled rifle (SBR). Stated more clearly, one can in fact legally fire an AR pistol from the shoulder while using a Sig brace.

I believe all of these developments raise several unanswered questions. First, how good is the PWS direct impingement system? And why would a company that is so good at making an effective piston system start making a direct impingement gun? Also, how does this PWS pistol with the stabilization brace compare to a properly registered SBR with a proper rifle stock? Is there any reason for you to shell out an extra $200 for a tax stamp and go through the rigorous paperwork involved with registering an SBR?

In past discussions with my cohort David Bahde, I’ve come to understand the merits of the PWS piston system. Now PWS is seemingly throwing a curveball at us. I asked the braintrust at PWS to explain to me why they have decided to go direct impingement. PWS believes it has developed a properly working, enhanced direct impingement system, and one that is good enough to wear the PWS badge. The folks at PWS also realize that there are budget-conscious shooters who may not need a (more expensive) piston gun.

The PWS DI-10P pistol is fitted with the same 10.75-inch, 1-in-8-inch-twist, chrome moly barrel as found in the MK110 rifle. PWS keeps the barrel-making process in house to ensure consistency in quality. The barrels also get further attention through a process of Isonite QPQ coating, also known as Arcor Salt Bath Nitride, which increases barrel hardness and adds further corrosion resistance. The barrel profile is a key component in longevity and accuracy, and PWS has developed a profile that balances accuracy, wear and weight. The barrel is fitted with PWS’ Triad muzzle device as well.

Though there are many similarities, there are many differences between the DI-10P and it’s piston-driven rifle sibling. The first and most obvious difference is the shorter, smooth, pistol buffer tube, which lacks the grooves and adjustment points of PWS’ other enhanced buffer tubes. PWS designed its own mil-spec-enhanced buffer tubes for its piston guns to eliminate carrier tilt and ensure proper alignment of the buffer tube with the receiver. This same design shows up in the DI-10P gun, as well as an H2 buffer.

PWS sells its new direct impingement uppers in varying lengths but void of bolt carrier groups and charging handles. To get the 10.75-inch barrel, you have to purchase the complete pistol, which is equipped with a bolt carrier group based on the MK1 series of rifles. The difference is that a traditional staked carrier key is secured to the carrier on the pistol. On the piston version, the small assist spring on the end of the bolt has been removed as well. In an effort to increase the affordability of the DI pistol line, its bolt carrier group has no nickel teflon coating, but is Isonite QPQ coated.

The upper receivers are the same across the board, cut from 7075 aircraft-grade aluminum. Another differentiating feature comes in the aluminum PWS KeyMod rail. The DI-10P pistol’s rail is 9 inches long, compared to 10.25 inches on the MK110. Yet another variance shows up on the lower receiver, though only cosmetic in nature. The words “modern musket” are etched on the right side of the mag well—nice touch!—and all controls are of standard AR configuration.

Not only does the PWS DI-10P come with the previously mentioned Sig stabilizing brace, but for a limited time PWS is including a Lucid HD7 Gen III red-dot optic with your purchase of a DI-10P pistol. Lucid started in 2009, with the objective of providing affordable shooting gear. It offers a couple of different red-dot optics, riflescopes and magnifiers. Lucid claims these optics are water, fog and shockproof up to the .458 SOCOM cartridge. The HD7 also features four different, user-selectable reticles. 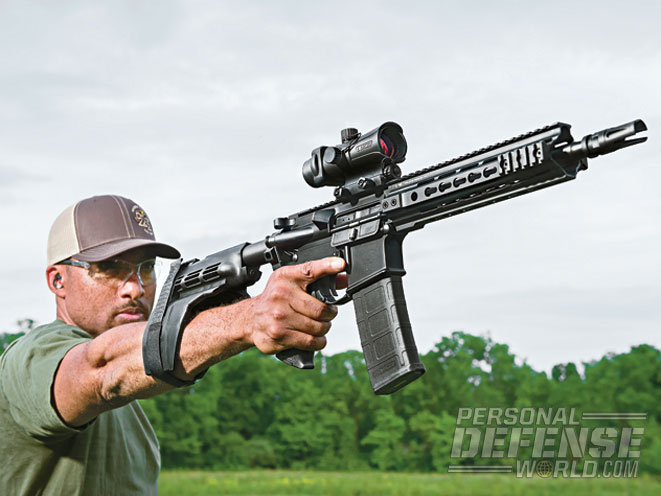 I’m sure one of the reasons AR pistols were developed was to appeal to individuals who want an SBR, which is allowed by federal law, but for whatever reason their local chief law enforcement officer might not sign off on the federal paperwork to allow that individual to own one. Being designated a pistol, the $200 tax stamp is not necessary, nor is the lengthy waiting period for that tax stamp to arrive.

With the advent of Sig’s pistol stabilizing brace, and the ATF ruling that it is an allowed accessory, citizens can now circumvent certain obstacles and own what is nearly an SBR. Though the stabilizing brace closely resembles a stock, and in many ways can be used in a similar manner including being used on the shoulder, a proper rifle stock it is not.

I have a fair amount of experience with SBRs, but this was my first encounter with the Sig brace. I compared the PWS DI-10P with the brace attached to a PWS MK110 SBR, and there is not much difference to the naked eye. The Sig brace just appears to be a less-than-attractive rifle stock. The stabilization brace spins around and slides up and down the buffer tube, and doesn’t lock in place. Although it’s not like a traditional AR collapsible stock (and legally can’t be), when I pulled the brace outward, away from the receiver to a length of roughly 1.5 inches or more between the stabilizer and the quick-detach attachments, it was very difficult to put enough pressure on the gun while shouldered to make the brace slide forward toward the receiver. There is just enough flex in the brace to allow it to “bind up,” if you will. This prevented the brace from sliding forward too easily. The brace could still spin on the buffer tube while under pressure, but that’s highly unlikely to happen when it’s solidly shouldered.

A Real Gas To Shoot

The PWS DI system is nicely done. As expected, the gun functioned well during testing. I was most impressed by the very smooth recoil impulse. All direct impingement gas systems are not created equal, and it seems that PWS has “gassed” its gun properly and delivered a product that is very enjoyable to shoot. After shooting the DI-10P, I grabbed the PWS piston gun to evaluate how it felt in comparison. The DI-10P delivers a push-like recoil to the shooter, while the piston system had an initial “snappy” feel when a round touched off.

I extended the Sig Brace to a comfortable length and shouldered it, but upon firing, the recoil caused the brace to slide forward and shorten with every shot. I tried to repeat the binding type of effect from before, but the mechanics of actually shooting are just too different. I ended up with the Sig brace in its shortest position, resting fully against the rear of the receiver. This position is too short for ideal shoulder-firing for myself, but it may work fine for others. However, in this position, there was virtually no difference in feel from a registered SBR with the stock completely collapsed.

I tested the PWS DI-10 for accuracy as it was from the box, with the Lucid optic and employing the legal shouldering technique. Because it is classified as a pistol, testing was done at 25 yards from a bench resting on sandbags. It was sunny and very windy. I did find the reticle of the Lucid a bit difficult to see in the bright conditions, although I had it turned up to max brightness. This, coupled with the red squares of the Hornady targets, made repeatable, precise aiming challenging.

During accuracy testing, I did make the following technical observations. The Sig brace swiveled around while trying to get a sandbag secured underneath. It also did this with each round that I fired, and collapsed a bit as well. This again reminded me that it does not exhibit all the benefits of a true stock. Shooters should be aware of these nuances should they decide to go this route. Your experience may be different.

As a complete package—the PWS DI pistol, Sig brace and Lucid optic—you are good to go straight out of the box. This combo is more than adequate for home defense and, in my opinion, more appropriate for close quarters. Keep in mind that though it is classified as a pistol, it is still “rifle loud.” Shouldering the PWS with the Sig brace adds a new element to the shooting experience, and the useful and functional limitations have yet to be fully explored. It’s by no means an SBR, neither legally nor functionally. But if you live in an area where you aren’t able to acquire a registered SBR, or you don’t want to pony up the extra money for the $200 tax stamp, the PWS DI-10P is as close as you’ll get—for now.