“...the M&P Shield is a close cousin to the same company’s popular Military & Police semi-automatic...”

The Shield variation of Smith & Wesson’s Military & Police (M&P) series was introduced in early 2012. I first had one in my hand at the NRA Annual Meeting in the spring of that year, in St. Louis. It was placed there by a company executive. I was impressed with it then, and after seeing and shooting several, I’m still impressed.

This gun fits the profile of what I’ve come to call a “slim-nine”—a thin, flat pistol with a single-stack magazine that’s chambered for the full-power 9mm cartridge. This one is even offered for the potent .40 S&W round of the same length. The first thing I noticed was that the trigger pull was nicer—less “mushy” in both break and reset—than the standard-size M&P it so strongly resembles. The S&W executive in question confirmed that it was, and that regular M&P triggers were going to be nicer than before, too.

The Smith 7 Wesson M&P Shield is under an inch in thickness—0.95 inches to be exact. This allows it to ride easier on the hip or in the purse, and particularly inside the waistband. Overall length is 6.1 inches, the barrel length is 3.1 inches, the height is 4.6 inches and the weight is 19 ounces unloaded.

My 9mm M&P Shield came with a seven-round magazine and an eight-rounder with a longer floorplate, each of course allowing one more round to be safely carried in the chamber. My .40 M&P Shield also had two magazines, a short six-rounder and a longer one that held seven. It’s true that the M&P Shield is a bit large for a pocket pistol, particularly when you compare it to, for instance, S&W’s own diminutive little Bodyguard 380. But it just cries out to be holstered inside your waistband.

The manual safety on these guns is left side only, clearly geared for the right-handed shooter. It is set farther back than I’d like, and unless you have very short thumbs (in which case it might be ideal for you), this puts the skin in the web of your hand against the lever instead of the solid median joint or the pad of the thumb. As a result, poor leverage is afforded for operating the safety.

Our two test guns differed as to the pressure required to operate the thumb safety. On the .40, it was extremely stiff going up to the “safe” position; it required a shifting of the hand to achieve that operation. It was stiff coming down, enough to be uncomfortable to that “web of the thumb” area. On the 9mm, however, while turning on the safety was difficult, it was nowhere near as difficult as the .40 sample, and swiping the safety down into the “fire” position was relatively easy.

It should be noted here that S&W gives a tacit impression that use of the manual safety is optional on this pistol. After all, the M&P Shield is a close cousin to the same company’s popular Military & Police semi-automatic, which has been out for a decade now. While a manual safety is optional, 70% (or more) of M&Ps thus far have been produced without that feature. I know a lot of people who own one or more M&P Shields and simply carry them with the manual safety off.

On the Lyman digital scale, the 9mm sample M&P Shield averaged 7.89 pounds of pull weight, and the .40 caliber sample offered 7.72 pounds. Pull characteristics were, not surprisingly, quite similar, and, with eyes closed, it was not possible for me to tell which was which unless I was manipulating the thumb safety, which was markedly tougher on the .40. There’s a relatively long, light trigger take-up, a tiny scrape and then a short, smooth roll back to break point and discharge. 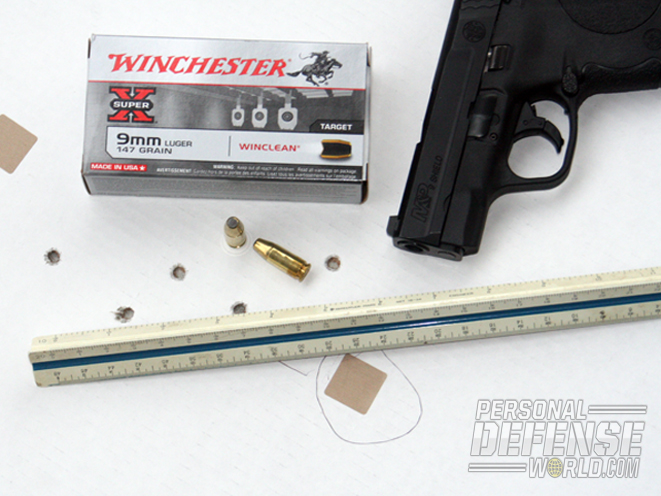 The first M&P Shield I brought to the 25-yard bench was the .40 S&W. The original .40 S&W round, and still the most popular, is a subsonic 180-grain load. I used a plain-Jane generic target/training load: the 180-grain flat nose full metal jacket (FMJ) under the Remington UMC brand. It shot way high, centering a good 5 inches above the aiming marker. The very first shot wound up dramatically low left of the four that followed. Because of that first hit, the total group measured 5.2 inches. The other four had come much closer to one another, forming a 2.05-inch group in two distinct sub-clusters, including a double. The “best three hits” measurement was 1.65 inches.

Next up was a middleweight that has earned great “street cred,” the Winchester Ranger SXT, with a 165-grain bullet rated for 1,140 feet per second (fps) from a 4-inch barrel, though it would run a bit below that from the M&P Shield. These shots centered at point of aim (POA), but once again, the very first shot didn’t want to be with its friends. This brought the five-shot group to a still-respectable 3.35 inches, while the remaining four were 2.95 inches. The best three of those were 2 inches even.

Finally, we shot the Federal HST with a 155-grain bullet that I would expect to get 1,200 fps from when using a full-size duty pistol. The 180-grain .40 HST is reported to be quite dynamic “in the field,” and great results have been documented with the HST in some other calibers. With this load, the very first shot went dramatically high, creating a whopping 5.4-inch group. Without that first shot included, the next four went under 2 inches (1.85 inches) and the best three were an outstanding 0.85 inches. 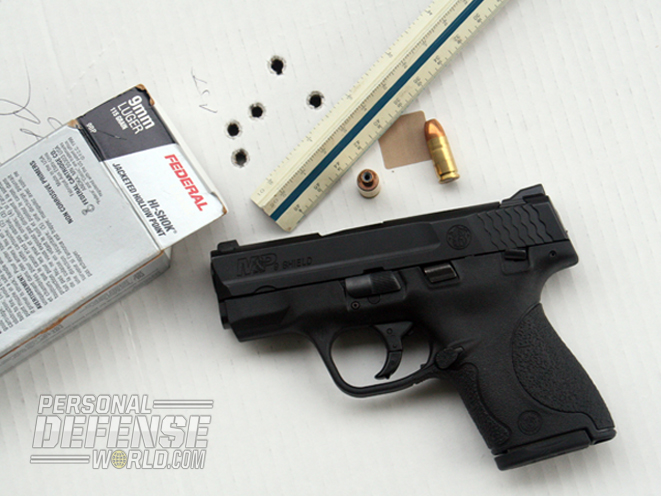 With the 9mm Shield, the heavyweight load was Winchester’s WinClean 147-grain jacketed truncated cone. It’s the most accurate low-lead 9mm round I’ve shot yet, and I’ve had it be the most accurate in other 9mm tests more than once. Not this time, though; it strung a 5.25-inch group that centered 4 to 5 inches above the aiming marker. The first shot was the lowest of that vertical string. The best three shots were in less than half the total group, 2.1 inches. If the first shot of the five was ignored, the remaining group would have been 3.65 inches, center-to-center.

For a 124-grain load, the choice was Remington Golden Saber Bonded +P, rated for about 1,250 fps, though it would lose a bit out of the M&P Shield’s short barrel. For the most part, it shot very close to POA. The very first hand-chambered shot went way low and left, and the result was a 4.35-inch, five-shot group from 25 yards, which isn’t really awful when you consider that 4 inches at that distance is generally considered “acceptable service pistol accuracy” for even a full-size 9mm pistol, let alone one this small. However, I can’t help but notice that shots two through five landed a mere 1.65 inches apart, and the best three were only 1.2 inches apart. Some “four-plus-one syndrome”? Ya think?

The last load was the one with the lightest bullet. Federal’s old Classic line 9BP has for many years been my benchmark load for testing 9mm pistol accuracy. It didn’t fail me this time. It put all five of the 115-grain jacketed hollow points (JHPs) into 1.70 inches, and the best three into a very tight 0.85 inches. No stray first shot this time! The Federal round was hands-down the most accurate of the test in terms of precision, but its group clustered a bit high and left of the aiming marker.

Recoil was soft with both pistols. Everyone on the test team remarked that the .40 M&P Shield kicked much less than they thought it would.

Shield In The Field 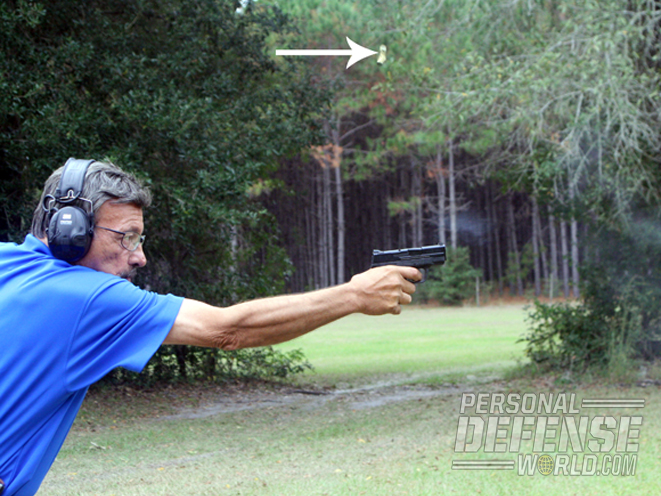 I’ve had several students go through my classes with M&P Shields. Only one had any sort of functioning problems. I checked her 9mm M&P Shield and it was absolutely bone-dry. Proper lubrication was applied and the pistol ran 100 percent from then on. We experienced no malfunctions with the two tested.

These slim-gripped semi-automatic pistols offer a relatively short reach to the trigger, making them particularly suitable for shooters with shorter fingers. In my own average-size adult male hand, this allows me to get my index finger on the trigger at the distal joint, which gives more leverage for controlling a heavy trigger pull, while the barrel is still in line with the long bones of the forearm. This affords maximum control.

The balance between shootability and concealability hits a sweet spot for pistol-packers who regularly test and maintain their shooting skill. A significant number of the men and women among the training staff I work with have put the M&P Shield in their carry rotation, and a number of them have made the M&P Shield their everyday carry. Bruce McKinstry taught a class with me recently with his .40-caliber M&P Shield worn in a Kydex cross-draw holster that he found particularly comfortable for the long drive to and from Phoenix, where we held the class. David Rodgers is a big, solid guy who has no problem concealing a Glock 34 or Glock 35 with 5.3-inch barrel and NY1 trigger, but lately he has found his 9mm M&P Shield particularly comfortable for IWB carry day in and day out.

Female gun carriers have curves and, particularly for wear inside the waistband, a slim pistol is even more important for all-day comfort than it is for their brothers. Jodi Sadler has gone with an M&P Shield 9mm for carry most days, and cites comfort as her reason why. Kate Krueger isn’t tall, but she tells me that because of body shape reasons, her M&P Shield 9mm has become the first pistol she is comfortable carrying IWB.

Since the M&P Shield came out, most gun dealers haven’t been able to keep them in stock. We see above the good reasons why. I wish the thumb safety was more ergonomic and that my M&P Shields weren’t subject to “4+1 syndrome” in grouping. But the M&P Shield is still a capable defensive pistol, and for concealed carry comfort and discretion it strikes a very responsive chord among both male and female holders of concealed carry permits. A very reasonable manufacturer suggested retail price of $449 certainly doesn’t hurt, either.