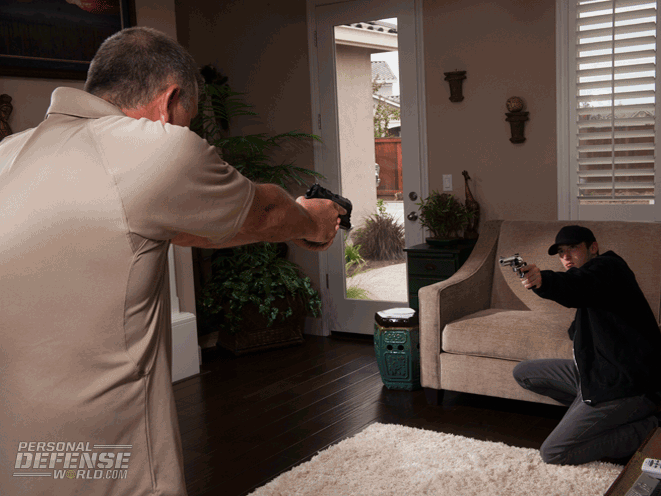 1 of 8
Photo by Alfredo Rico
Repel Intruders
When violent home intruders strike, be prepared to instantly repel them. 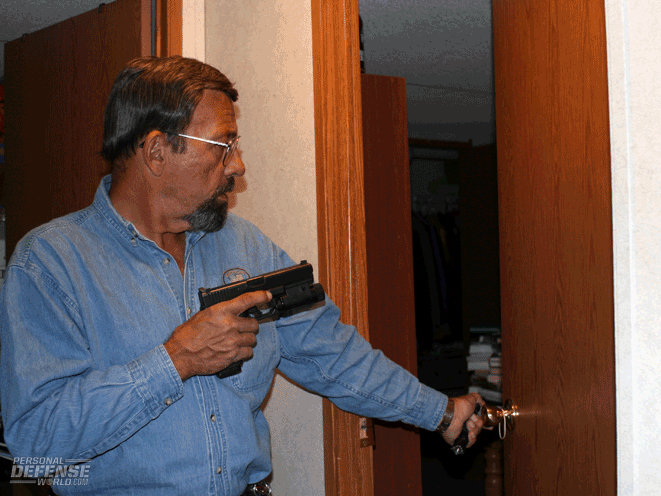 2 of 8
Behind the Curve
No matter how carefully you search your house, you’re behind the action/ reaction curve. 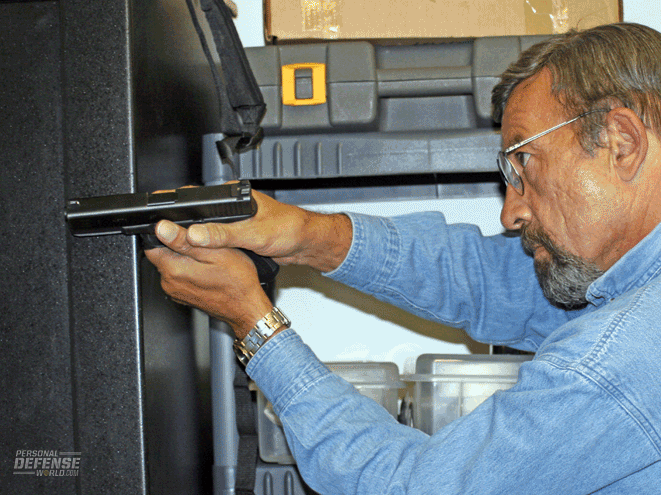 3 of 8
Seek Cover
Get behind solid cover (this gun safe will do) where you can interdict a home invader on much safer terms, while waiting for the cavalry to arrive. 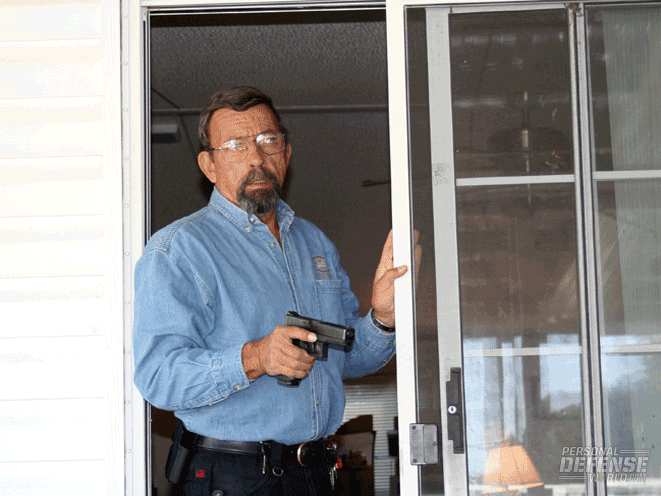 4 of 8
Keep Gun Indoors
Stepping outside of your home with a gun in your hand to search your property can lead to several disastrous outcomes. 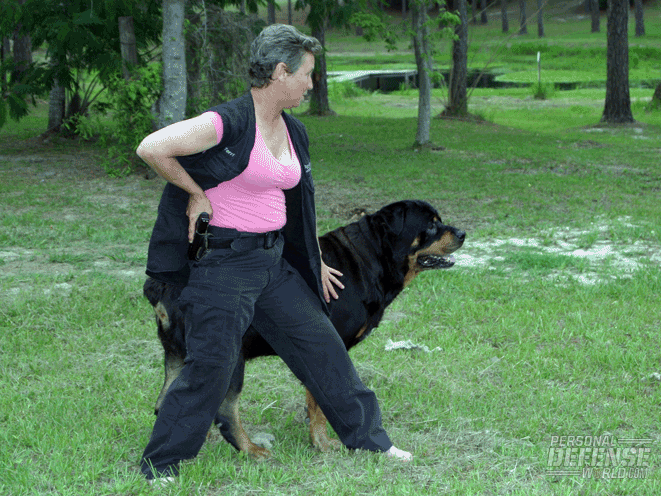 5 of 8
Canine Protection
Terri Strayer augments her daily carry pistol with a well-trained Rottweiller. A combination that affords peace of mind. 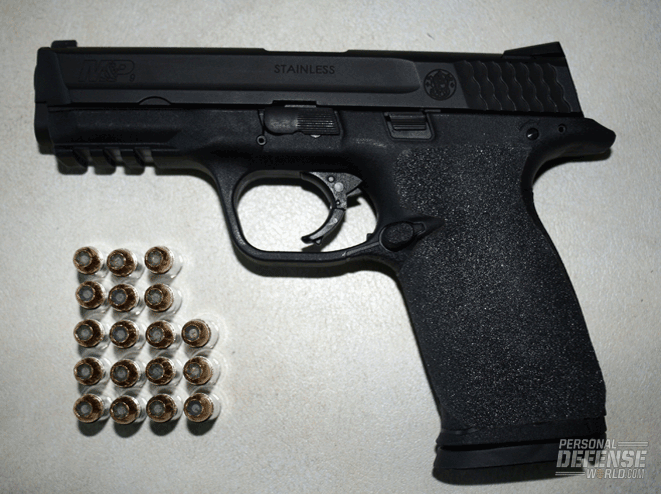 6 of 8
Large Cartridge Capacity
A large cartridge capacity, as with this 18-shot S&W M&P, is a good thing in a home-defense handgun. 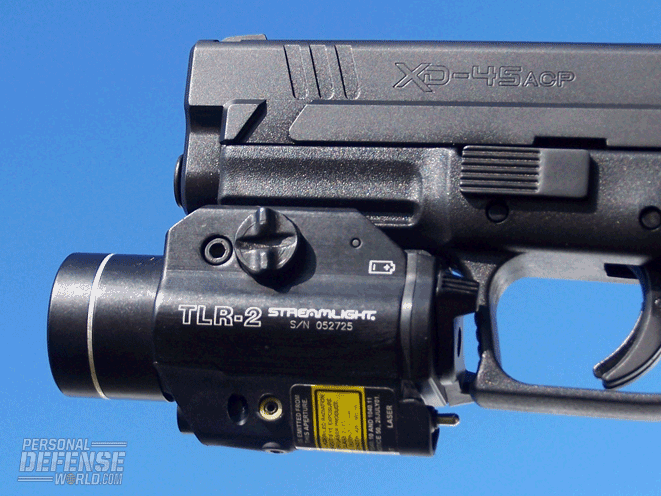 7 of 8
Safer Targeting
Mount a light/laser unit like this Streamlight TLR-2 on your gun for faster, safer targeting. 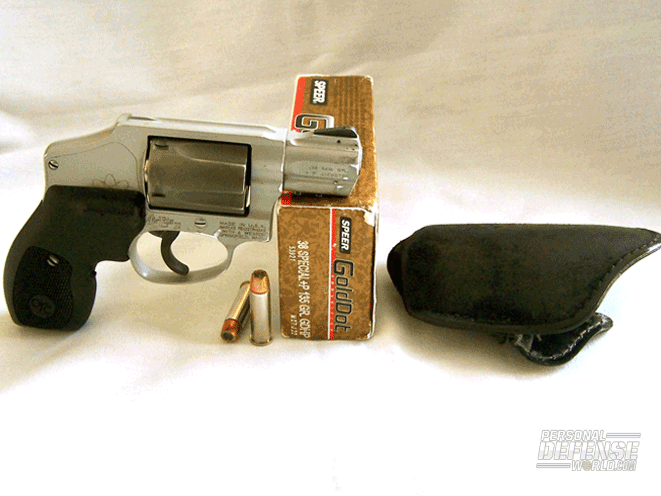 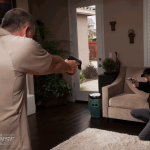 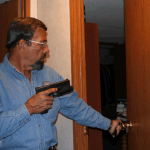 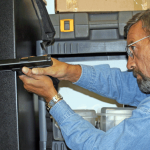 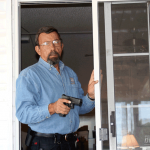 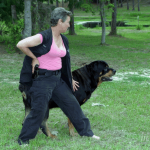 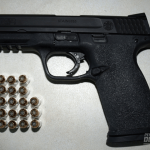 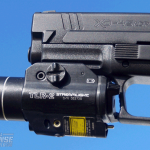 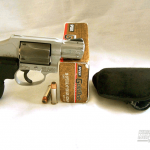 We’ve seen some recent incidents and revelations bearing on home defense.  The great majority of times an armed citizen has resorted to a firearm to protect “home and hearth,” they’ve prevailed, with no negative consequences to them. Some incidents, however, did not end so well.

In one case, police cars were summoned when a report came of someone breaking in. As the cops converged, a neighbor drew his gun and went out for a look around. Cops saw him with the weapon and, thinking he was the home invader, ordered him to empty his hands.  The man set the weapon down and appeared to be complying but then, the police said, he reached for it. They shot him dead. There was great furor among the public and the media, but the fact is, when you go out to investigate with a gun in your hand, and you fit the visual profile of the potentially dangerous suspect they’re looking for, a predictable mistaken identity shooting by law enforcement can very easily result.

Solution? Don’t step outside past your own threshold. If you do, you run the risk of being mistaken for an armed criminal and shot. If you must venture out to reconnoiter, do so with your handgun concealed. I’ve noticed over the years that jury after jury has perceived the homeowner leaving the safety of his “castle” and going looking for someone who ended up getting shot as “looking for trouble.”

In another recent case, a disoriented young woman began pounding on a man’s door after she had been involved in a car crash. She might have been drunk and might have become confused from the trauma of the accident or a head injury resulting from it. In any case, the homeowner opened his inside door, leaving only a screen door as an obstacle between them. He had a loaded shotgun in hand. Moments later, a shot was fired. The shotgun blast reportedly struck the young female subject in the back of the head, killing her. The man with the gun was said to originally claim that the shot was fired by accident. He has been charged in the homicide and is awaiting trial at this writing.

A third case occurred in the South just before this was written. A man walked onto another’s property, and when the homeowner came out and confronted him, approached in what was apparently seen as a menacing fashion. The homeowner shot him dead; the interloper turned out to be an unarmed 72-year-old Alzheimer’s patient. At this writing, no charges have yet been filed but there is strong public/media pressure suggesting that the homeowner could have averted it all by staying inside and calling the police, even though he did not technically violate the laws of his state.

All of these cases talk to us. Had the homeowners simply stayed behind cover inside and called the police, if the intruder had then battered down the door and the home defender had fired, there would have been far less momentum for the prosecutors to seek indictment and conviction.

On December 14, 2012, a human monster murdered his own mother to access her firearms, then murdered 20 children and six almost equally helpless adults with an AR-15 before he committed suicide. It occurred at the Sandy Hook Elementary School in Newtown, Connecticut, and it triggered the most intense wave of gun prohibitionist efforts yet, reverberating through 2013 and into 2014 and undoubtedly beyond.

RELATED: How to Survive a School Shooting

Lost in the emotional response was the fact that if the same thing had happened in Israel—which has used a mix of armed teachers, armed citizen volunteers and dedicated armed security professionals in its schools since the Maalot Massacre of the 1970s—the killer would have been cut down a few steps into the atrocity, and most if not all of the lives would have been saved. Many American citizens “got it,” though. If school is “home away from home,” school protection is a cousin to home defense. “Fight fire with fire,” and all that.

AR-15 sales soared to unprecedented heights, and now more of them occupy American homes for security purposes than ever before.  There is a lesson there.

In Nairobi, Kenya, last year, terrorists took over a shopping mall and slaughtered many innocent people. Armed citizens who were able to respond sooner than the police and military saved many lives and prevented further carnage. There is a lesson there, too.

After Sandy Hook, Vice President Joe Biden carried the anti-gun ball for President Barack Obama. He publicly recommended a double-barrel shotgun that people could fire through the door at home intruders, and which he had told his own wife to empty into the air with warning shots if there was an invasion. At least one person who later did so is reportedly now using a “Biden defense,” in effect saying he did it because the VP told him to.

Firing through doors at unidentified people is, of course, not recommended by any professional out there, nor are warning shots. On the hardware side, Biden’s insistence that a shotgun was easier to shoot than something like an AR-15 drew jeers from knowledgeable people, some of whom posted videos of women unfamiliar with shotguns being knocked off their feet by their recoil, but new female shooters with AR-15s beaming with pride and confidence after firing their first magazine. The collapsing stock option on an AR allows it to instantly adapt to the most petite female or the tallest male. Today more than ever, the AR-15 (and similar .223s like the Ruger Mini-14) is entrenched in the home-defense role in America.

Those who still prefer shotguns are well served to get one that fires more than two shots. The mildly-recoiling 20 gauge semi-automatic is a little-known home-defense secret: amply powerful for its task, but relatively easy for the smaller, less-experienced home defender to operate effectively.

In about the same timeframe as the Sandy Hook atrocity, a young mother in the South had to fight off a big, violent home invader. She ensconced herself and her brood upstairs, and when the intruder came at them, emptied her six-shot .38 Special revolver into him. Though seriously wounded, he was still up and running. Out of ammunition, the brave mom bluffed him with the empty revolver, threatening to shoot him again.  He lost heart and fled, to be captured shortly thereafter. Her courage and her gun had saved her and her kids, but the incident reminded many gun-owners that fire-power was indeed a selection parameter in home-defense weapons.

This writer, 20 or more years ago when his kids were still young and at home, crafted a dedicated home-defense handgun. It was a stainless Beretta 92FS 9mm pistol, its action tuned and its barrel replaced with a 6-inch Magna-Ported Bar-Sto, mounting a SureFire WeaponLight and loaded with a 20-round extended Beretta magazine. Today more than ever, armed citizens are recognizing the advantages of similar setups. When awakened by a late-night intrusion, they may not have time to grab spare ammunition, and may not have a place to stow spare magazines or speedloaders on their person. What’s in the gun may be all they have, hence the logical appeal of the higher-capacity handgun for such safety-rescue equipment.

Physically challenged individuals will particularly benefit from the extra rounds of a higher-capacity home-defense gun. The person on a cane or walker or in a wheelchair can’t run to cover to reload when they run dry; they more than anyone else need a gun that holds enough ammunition to just keep shooting. Many other handicaps can slow the good guy or gal’s ability to reload.

Each year, it seems, we see more people who simply carry the gun on their person when at home.  It’s not paranoia; it’s generally a result of having done a time and motion study. Depending on the circumstances of the home invasion and where the homeowner happens to be, it can take a long time to get from where they are when they become aware of danger to the where the gun is. Then, they may have to retrieve it from a locked container. They may even have to load it. That all takes time. But if there is a loaded gun secured on the householder’s person, it is instantly accessible to them no matter where they are in their home or even outside on their property.

This is particularly important if they’re outside the house where the guns are normally stored when the need for one of those guns suddenly and desperately arises.

While some people live in neighborhoods and communities where they can simply carry a full-size fighting pistol and ammunition pouch openly, others are in situations where that just won’t work. However, a small handgun holstered in the pocket, on the ankle, or under an untucked shirt allows the spouse or parent to be able to instantly react to a life-threatening intrusion wherever they themselves may be when a home invasion strikes, almost always without warning.

The responsibility to secure lethal weapons from unauthorized hands has never left us. In May of 2013, a young child was able to access a loaded gun left unsecured, and shot and killed another child with it.  If the gun is not secured on our person, it can certainly be secured in any number of quick-release gun storage boxes now on the market. Their design allows them to be opened only by people who, being authorized, have the combination to the lock or the biometric recognition to open the safe and access the weapon.

Home defense will always require a multi-layered, holistic approach.  Panteao has my Home Defense training program available on DVD or online streaming. That presentation touches on locks, alarms, dogs, and defensive architecture as well as weapon selection for home defense.

It delves far deeper into the topic than I can in the space afforded here.

The past year reinforces some things we have always known. When violent home invaders strike, the good people who are prepared to instantly repel them with equal force tend to win the encounter. The good people who do not have the wherewithal to do that are likely to end up as martyred victims.

This article was originally published in COMPLETE BOOK OF HANDGUNS 2014. Subscription is available in print and digital editions below. 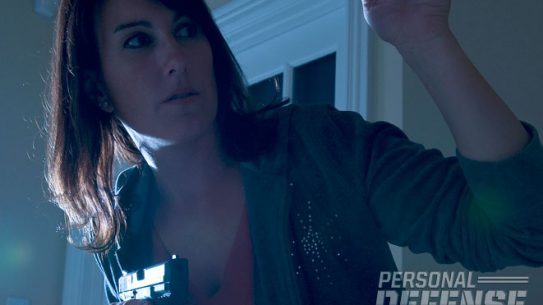 Own the Dark with flashlights, gun-mounted lights and lasers to ID threats and make...