As much as this person might enjoy night clubs and that one might prefer to work the midnight shift, as much as anyone might be a “night person” relatively speaking, we humans just aren’t nocturnal creatures. If we were meant to function at our best in the darkness, cities and farms alike would be still during the day shift. That’s why, when the sun is down and the lights are out and all we have left is scotopic vision, we’re the equivalent of legally blind. Blind creatures are vulnerable to predators who aren’t blind.

One of my graduates was in one of the World Trade Center towers when the terrorists hit. He was among the survivors. He will never forget the blind horror of clambering down emergency stairs in pitch darkness. Ever since, he has  carried two flashlights.

It’s something he learned from experience. Experience, it is said, is the aggregate of our mistakes. Otto von Bismarck famously said that wisdom is found in learning from the mistakes of others. Let’s share some of that learning. 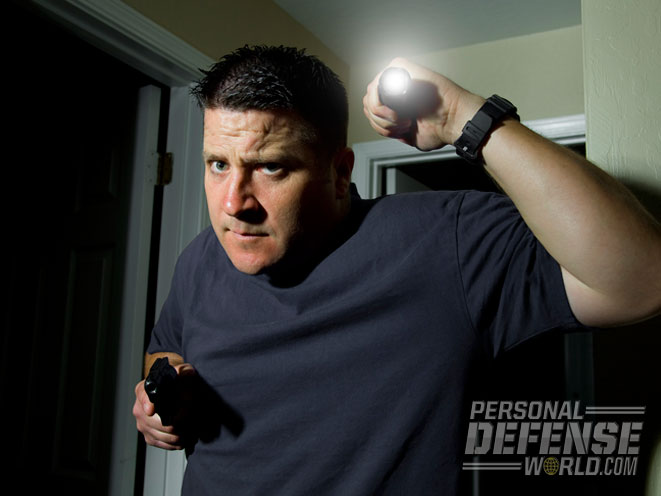 When I was very young, there were bulky Eveready flashlights in the home and in the cars, of course, but I never felt the need to carry one. When good flashlights small enough to carry came out, I got one. I was a young cop by then and had already learned never to be without a flashlight, even on the day shift. On that job, you never knew when a call would take you out of the bright light of high noon and into a dark shed or a pitch-black basement, and you never knew when an emergency at work would keep you on the job well past dark. A Mini-Mag in the hip pocket became part of standard daily wear, even if I wasn’t working for the police department.

Time went on. Now, I’m old. For many years now, I’ve carried two flashlights almost all the time. The little Mini-Mag in the hip pocket is now the backup. (It also serves as a backup Kubotan, or mini-baton, should that become necessary.) But there’s also a more powerful light, usually a SureFire, on my belt or in a cell phone pouch of the cargo pants.

Why two? As Clint Smith famously said, “Two is one and one is none.” He was talking about guns, but it really speaks to all emergency gear. If the one you have dies or is lost, or has to be handed to someone who needs it more than you to help fix the emergency, you’re left helpless if it was only one gun, and you can be left literally in the dark if it was only one flashlight. “Two is one” means that you’ve provided for “emergencies with the emergency gear” and will still be left with the now all-important “one.”

Gun-mounted lights have been with us for a long time. They didn’t really become popular until SureFire figured out how to make the concept feasible with sufficiently small, powerful lighting units. By the 1990s, they were standard equipment on SWAT weapons and almost standard with police K9 officers, who, with one hand on the dog’s leash and the other holding a pistol during a manhunt or chase, didn’t have any hands left for a separate, dedicated illumination device.

The rationale of the gun-mounted light for general police patrol tracks back a little over a decade. Some cops resisted it (and still do) because it added bulk and weight to the holster. Some chiefs didn’t like the idea, either (and still don’t), because it made the gun and holster bigger and more conspicuous, which in turn was seen by some as making the officer’s hardware look bigger and scarier.

At first, it seemed like a good plan to issue a pistol-compatible light in a separate duty pouch, which would be snapped onto the pistol if the officer had to perform a building search or take part in a manhunt in dark places. That soon went by the board, when instructors and chiefs saw their personnel putting them on the gun awkwardly. (Remember, in the field, that action by definition would be taking place in the dark.) Manufacturers of those lights envisioned civil lawsuits for shot-off hands and began to market their lights with the warning that they should be carried attached in the holsters. Some manufacturers even specified that the gun be unloaded before putting the light on it, and in the real world, that wouldn’t do at all.

So, the concept of carrying the gun light separate from the pistol and attaching it only when needed quickly came and went. This doesn’t mean that it’s not at all viable as a concept. Many of the gun-mount-ing lights, such as the Streamlight TLR series, roll onto the mounting rail from the side instead of sliding on from the front, eliminating the need for the hand to get in front of the gun’s muzzle at all.

My friend “Super Dave” Harrington, for many years a teammate with me on the Panteao Gun Team, recently told gun expert Cameron Hopkins that he carries this way. Dave wears his Paul Liebenberg Custom 1911 on his right hip, and carries a gun-mountable light separately on his left-hand side. He has no problem using the separated gun light as a flashlight for ordinary illumination tasks, and only when necessary does he take it out and snap it on the gun. I for one consider this viable. Just make sure you practice putting it on and taking it off the unloaded pistol a lot before getting into the habit of doing it live.

That said, it’s now possible to get concealed-carry holsters that will accommodate a light-mounted pistol. One of my favorite carry rigs in cool weather is a Concealment Solutions Black Mamba inside-the-waistband unit, which is cut to take a full-size Glock with a white light unit attached.

The light units themselves are getting smaller and smaller, and that helps. At Tamara Keel’s great gun blog, we notice that one of her regular carry pistols is a Smith & Wesson M&P Compact with the neat little Crimson Trace Lightguard. This is about the smallest viable white light unit that’s out there, and it’s de-signed to attach to the front of the given pistol’s triggerguard. 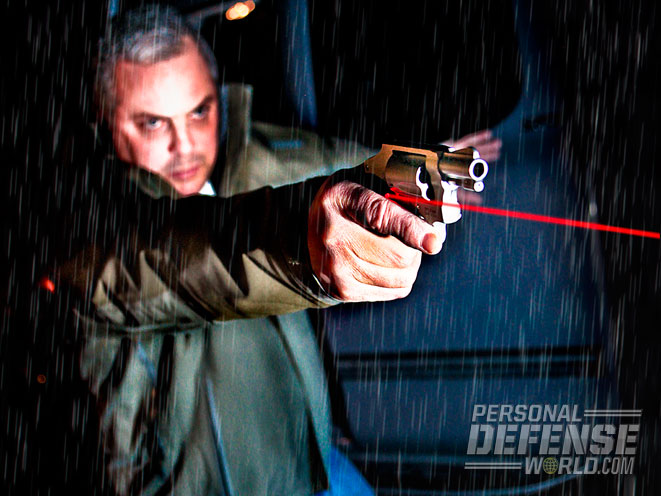 The light lets you identify your target—a good thing. But when it’s used for routine searches, it can end up spotlighting an innocent person. And, if a gun is attached to the light? Pointing your gun at an innocent person is a bad thing.

I strongly recommend using a sep-arate, dedicated flashlight for searching, and the white light unit attached to the gun only if you are absolutely certain that it is a bad guy you’re about to light up with the lamp that projects from under the muzzle of your gun.

When searching for bad guys, some-times you find them. But sometimes you also find good guys. The bump in the night that you thought was a home invader might just have been a teenage son or daughter sneaking in late and being stealthy to avoid parental anger. Even if you have the self-discipline to keep your trigger finger safely registered on the gun’s frame and don’t fire when you experience a predictable startle response, you’ll still have pointed a loaded gun at your own kid. It will create a bitter lifelong memory for each of you. That’s what you’re dealing with when searching using a light mounted on your defensive firearm.

I have long advised my students to treat the light attached to their gun the way they would treat the telescopic sight atop their hunting rifle: It’s not wise to use either to search for the quarry!

If you or your child were muzzled by some idiot who used his riflescope as binoculars, you’d want to see him lose his hunting license and perhaps even be criminally charged, and no one could blame you. When we inadvertently catch an innocent in the beam of light coming out from the gun, we’ve essentially done the same thing that irresponsible “slob hunter” did.

At the same time, we’ll never know how many lives have been saved over the years when a hunter spotted what looked like a deer with his naked eye and raised his rifle, only to discover just in time through the magnified field of his telescopic sight that it was a human instead of a deer in the crosshairs. That is an often-overlooked saving grace of scopes on sporting rifles.

In direct parallel, we’ll never know how many lives have been saved when a suspect turned on a cop in dim light holding a metallic object in his hand and escaped being shot because the powerful white light on the officer’s gun revealed that he was holding car keys or a cell phone, not a knife or gun. Rifle-scope or gun-mounted light, there is a saving grace and there is potential for abuse. Note in each case that the aid in vision—the scope’s magnification, the light’s ability to allow threat identification—only comes into play when there has been a strong indication that we are already looking at a “shoot target.”

Laser sights are available in many formats. They can be integral with a pistol’s recoil spring guide under the muzzle (LaserMax), attached to the triggerguard or molded into the grips (Crimson Trace), affixed to the rear sight (LaserLyte) or mounted on an accessory rail (Viridian, for example). They can also be had in a combination unit with a white light (Streamlight, SureFire, etc.).

Folks with imperfect vision who can identify their target but can’t see iron sights will find the laser sight a godsend. It’s a useful fail-safe for those committed to “point shooting” with a body position index as opposed to a visual index. It can be a lifesaver for the wounded defender whose hands still work but whose incapacitated arms can’t raise the gun to eye level. Laser sights are particularly valuable on those guns, often older ones or smaller ones, that have sights so small and tiny they’re not worthy of the name.

The laser option, obviously, will also work remarkably well in the dark. One selling point with them that may have been oversold is the intimidation effect. While there undoubtedly are bad guys out there who surrendered when they realized “the dots were on them,” you can’t expect a bad guy to either be looking for the dot in the first place or to stand in place like a good little target when he does realize it’s there.

Stronger beams and longer-lasting batteries in more compact packages have been the inevitable course of light and laser development, and if we’re all lucky, that trend will continue in the future. For now, suffice to say that, while neither is a be-all or end-all, the gun-mounted white light and the laser sight have proven their worth. Neither will replace a good flashlight—small enough to always be with you, handy for everyday chores and a lifesaver when all kinds of situations can turn the darkness dangerous.