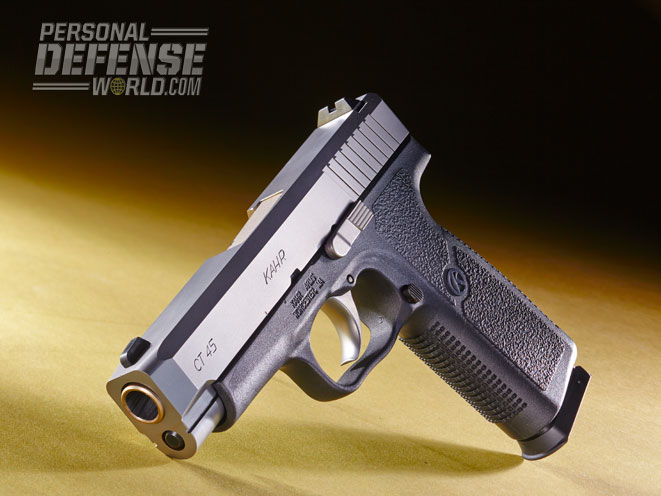 Realizing that finding a budget-friendly concealed carry handgun can be a difficult task, author Mike Detty investigated Kahr’s CT45 for the February 2015 issue of COMBAT HANDGUNS. Detty came away impressed by the striker-fired, polymer-framed, .45 ACP pistol’s accuracy and its sub-$500 price tag.

“The CT45 is every bit as tall as a 1911, and its slide is actually just a hair thicker. But it is nearly a pound lighter than a steel-framed Government Model, and the grip frame is about 0.3 inches slimmer. There’s no grip safety, thumb safety or external hammer to clutter the CT45’s lines or snag on clothes. The only external protuberances on the Kahr pistol are the magazine release and the slide stop,” noted Detty.

The CT45’s polymer frame and grip design allowed Detty to get a solid hold on the pistol during range testing, and aided his control when performing follow-up shots. “It’s a lightweight gun that feels good in the hand thanks to its full-size dimensions. It also sits low in the hand due to Kahr’s patented offset barrel lug, which allows the trigger bar to ride next to the barrel lug rather than under it. This dramatically reduces the pistol’s height and puts the hand closer to the bore’s axis, thereby reducing muzzle flip.”

During testing, Detty noted the CT45’s long trigger pull, a feature that he felt added security in place of a manual safety on the gun. “The CT45 is a striker-fired gun, and it possesses a smooth, albeit long trigger pull. Without a manual safety, the Kahr engineers wanted to make sure the gun only fired with a deliberate pull of the trigger. There is a passive striker block safety that mechanically blocks the striker unless purposeful pressure  is placed on the trigger. My test sample’s trigger pull broke with 5 pounds of pressure, and it is consistent from first to last shot.”

To read the full article, check out the February 2015 issue of COMBAT HANDGUNS, available on newsstands October 28th, 2014. To subscribe, go to https://www.personaldefenseworld.com/subscribe. 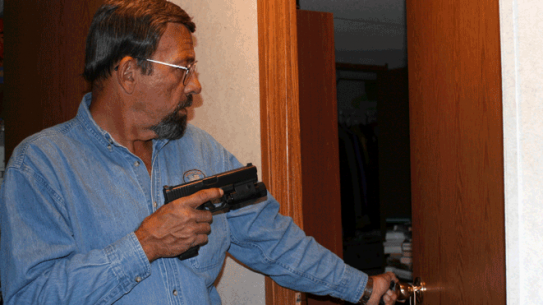 When violent home invaders strike, be prepared to instantly repel them with these home...