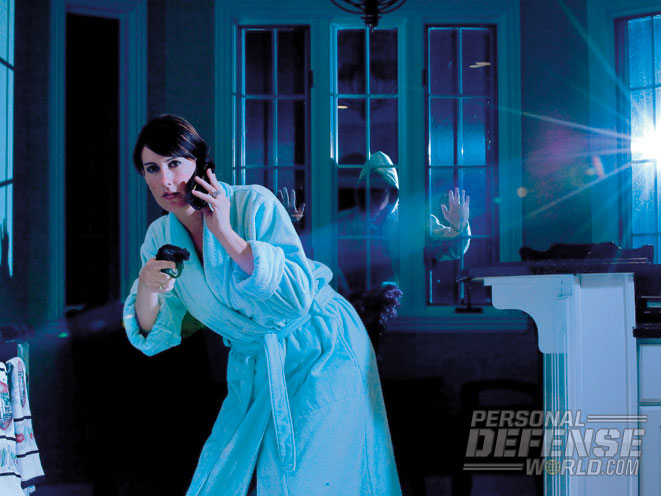 1 of 6
Photo by Sean Utley
Self Defense & The Law: Defense Against Unseen Dangers Calls for Common Sense Tactics 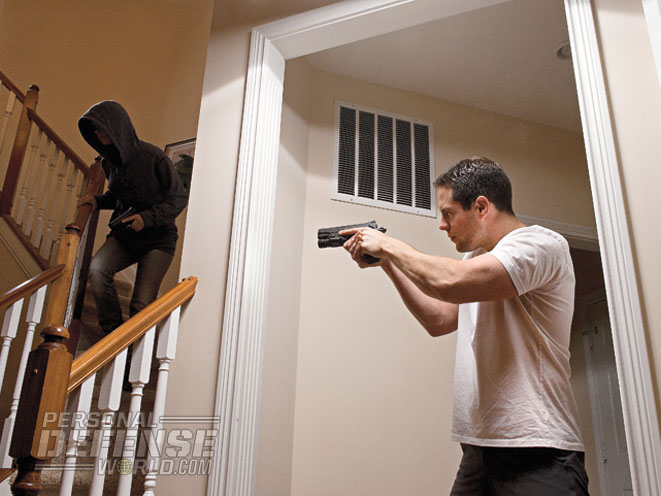 2 of 6
Photo by Sean Utley
Self Defense & The Law: Defense Against Unseen Dangers Calls for Common Sense Tactics
No two home invasions are alike. If the intruder has already made it into your home, you must still determine if they’re good or bad. 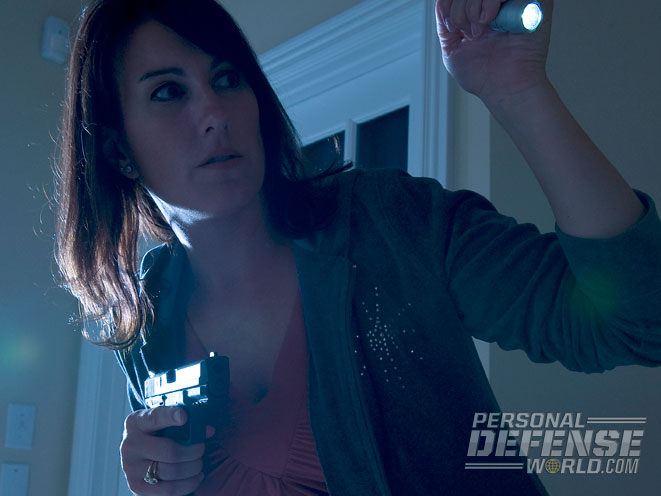 3 of 6
Photo by Sean Utley
Self Defense & The Law: Defense Against Unseen Dangers Calls for Common Sense Tactics 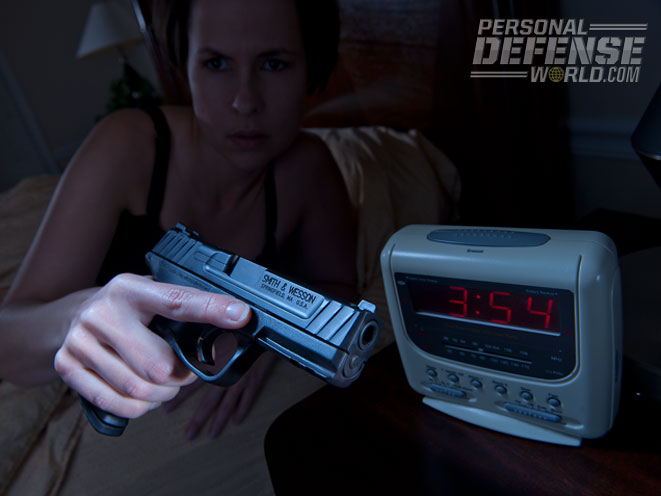 4 of 6
Photo by Sean Utley
Self Defense & The Law: Defense Against Unseen Dangers Calls for Common Sense Tactics 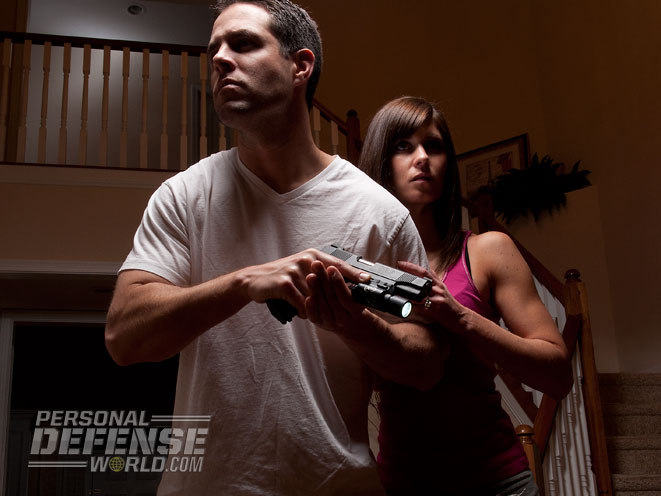 5 of 6
Photo by Sean Utley
Self Defense & The Law: Defense Against Unseen Dangers Calls for Common Sense Tactics 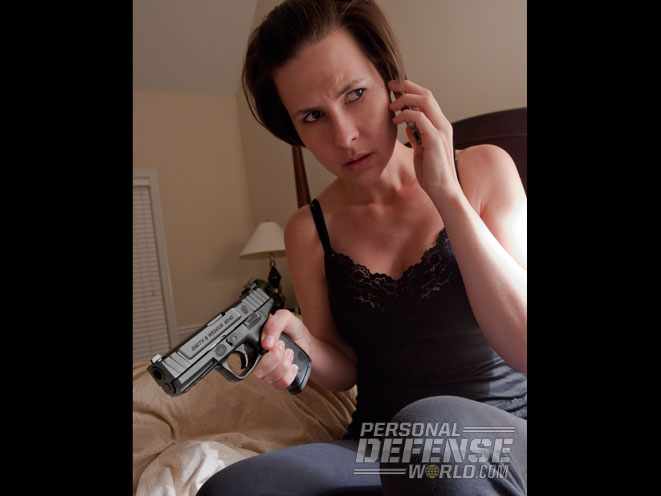 6 of 6
Photo by Sean Utley
Self Defense & The Law: Defense Against Unseen Dangers Calls for Common Sense Tactics 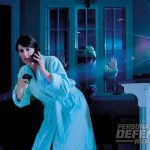 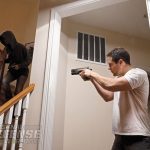 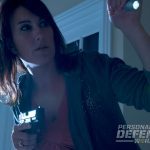 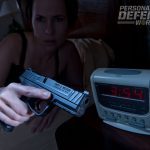 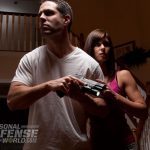 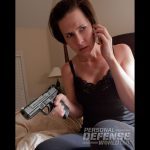 In the wake of the Sandy Hook atrocity, certain politicians tried to ban so-called “assault rifles” more ferociously than ever before. President Barack Obama reportedly assigned Vice President Joe Biden to lead that charge. In the spotlight of the media, Biden advised one dangerously bad strategy after another.

First, he claimed he had told his wife that if she feared intruders were at the door, she should take a shotgun out to the balcony and empty it into the air to scare them away. Quite apart from what he expected the Secret Service to be doing during all this, it was incredibly bad advice. What goes up must come down, and she would have been spraying something between shot pellets and 1-ounce slugs all over the neighborhood. It would also have left her holding an empty shotgun to defend herself with once the intruders did break in.

Then, in a recorded interview with the outdoor sports magazine Field & Stream, the vice president said, “Well, you know, my shotgun will do better for you than your AR-15, because you want to keep someone away from your house, just fire the shotgun through the door.” That turns out not to work terribly well for the people holding the shotguns.

That last piece of advice puts the trigger-puller in the situation of firing at an unidentified target. Even if you are directing your fire toward where you last saw the threatening criminal suspect, you don’t have X-ray vision: You can’t see what’s on the other side of the door. Perhaps the person pounding on your door is a bit addled, has just realized he has come to the wrong house and has turned his back to walk away when your shotgun blast kills him from behind. Or maybe an innocent Good Samaritan is pulling him away and in the line of fire when you pull the trigger. Or maybe, not being able to see what’s going on beyond that door, you’ve mistaken a good person for a lethally dangerous bad one. The possibilities for this going downhill are almost endless.

Case One: In February of 2013, a Virginia Beach man was arrested for doing exactly what VP Joe Biden recommended. The man, 22-year-old Trevor Snowden, was charged with reckless handling of a firearm. He stated that two armed, masked men had leaned into his bedroom window and ordered him to close the bedroom door, and that he then ran out of the bedroom, closed the door and blasted away through that door (toward the window) with his shotgun. It does not appear that Snowden’s gunfire struck anyone, and last I heard, neither of the men he reported firing at had been taken into custody by police.

Case Two: In 2014, in Wayne County, Michigan, a trial verdict and sentence ended a case that began when a shotgun blast through a door killed Renisha McBride, 19. McBride had been drinking alcohol and consuming marijuana earlier in the night in question, gotten into a car crash and apparently left the scene wandering on foot in a befuddled state. She wound up pounding on the door of Theodore Wafer, 55. Wafer told police that he grabbed his shotgun, not knowing whether or not it was loaded, and proceeded toward the sound. He opened a locked steel door and, claiming to be terrified, discharged a 12-gauge blast through the screen door. Struck in the face, McBride did not survive.

Though his attorney raised a self-defense plea, Wafer had initially told the police that he fired by accident. Legal analysts who followed the trial felt that the jury was unsympathetic to his case, feeling that if he had just left the steel main door closed and locked, he would have been safe from the unarmed young woman. The jury convicted him of murder in the second degree, and he was sentenced to 17 years in prison.

Case Three: In September 2014, after a trial that dragged through the summer, a judge in Pretoria, South Africa, found Oscar Pistorius guilty of culpable homicide in the death of his girlfriend, Reeva Steenkamp. A celebrity athlete known as the “Blade Runner” because he had won running championships on a pair of prosthetic legs, Pistorius claimed that he had thought intruders might be in his house and locked in the bathroom when he fired through the bathroom door with what was described as a silver 9mm pistol and Winchester Black Talon ammunition. The bullets struck and killed his girlfriend, the only person on the other side of the door.

Though the state had charged premeditated murder, the judge felt that premeditation and malice had not been proven beyond a reasonable doubt. However, she also determined that Pistorius had acted without reasonable care in shooting at an unidentified person through the door. Sentencing has not been pronounced as of this writing. However, it should be noted that Pistorius’ own account of his actions is virtually an admission to the reckless act of culpable homicide, known in the United States as manslaughter.

One law school example of recklessness is “blind man with a gun.” When we shoot through doors, we are literally doing so blindly. No one should be surprised that the legal system takes a very dim view of such actions. Most shooters today follow the famous “Four Rules of Firearms Safety” set down by the late combat shooting expert, Col. Jeff Cooper. Those rules may be paraphrased to include considering every firearm to be loaded, never pointing it at anything we are not justified in destroying, keeping our finger outside the triggerguard until such time as it is appropriate to shoot, and always being certain of our target and what is behind it.

Shooting through the door all but guarantees a violation of Rule Four, since we can’t see exactly who or what is on the other side of an opaque door. It also tends to violate Rule Two for the same reason.

Biden’s advice on this is wrong on every count, including his earlier exhortation to fire live shotgun ammunition into the air. Consider the ordeal of Jeffery Barton, 52, in Vancouver, Washington. He became the focus of Case Four when, in the summer of 2013, he tried to frighten off prowlers he thought were about to steal his car from his driveway—by firing his shotgun twice into the air. He was arrested for illegally discharging a firearm, and said publicly, “I did what Joe Biden told me to do.” Not until more than a year later did the prosecutor announce that he was dropping that charge.

The final lesson? Follow Col. Cooper’s golden rules, and don’t do stupid, dangerous things even if advised to do so by a high-ranking U.S. politician who happens to be an attorney and former prosecutor, and, of all people, should have known better. 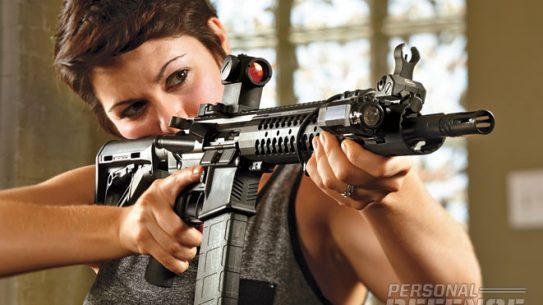 Carbines as a Home Defense Option

Optimize your defensive choice against a violent home invasion!