by Dave Campbell
in Gear, Guns
0

The First 24 kit from Taurus contains several tools, including a Judge revolver, that will be useful in a natural or manmade disaster.

Once again, it turns out that many of us were right. We used to be called “survivalists,” but the term used today is “preppers.” As the rest of the public snickered in disdain, we quietly made preparations for a day when supermarkets would be barren, electricity and water might not be readily available and elements of the population might resort to looting their neighbors for everything from food to jewelry.

The snarkiness of those who laughed at our efforts to prepare has begun to evolve into an attitude of “maybe it would be a good idea to put away a few things, just in case” after some recent calamities. Cataclysms may be society based, but lately it’s been just as likely to be a natural occurrence like Hurricanes Katrina and Sandy, a fire or a horrific tornado. These events come with little, if any, warning. At any given moment you might be called upon to vacate or defend your home from an invasion or natural disaster. That’s when you need a bug-out kit.

A bug-out kit is a pre-assembled array of critical tools and supplies you would need in an emergency. The contents of such a kit are as esoteric as each one of us. It would be impossible to create a universal and all-encompassing bug-out kit that one person could carry. However, there are a few things we all could use: a self-defense weapon, a good supply of ammunition, an artificial light source with spare batteries and a few other essentials. Taurus introduced such a sub-kit this year. 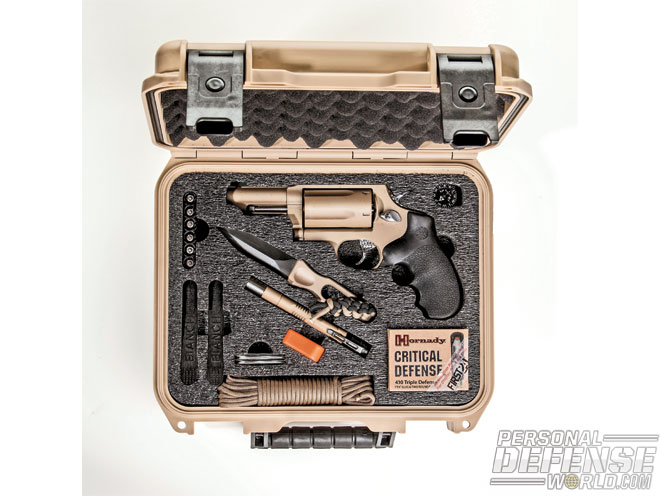 Introduced as the First 24 kit, this system certainly isn’t everything anyone would need, but the items in it are things virtually anyone would need in an emergency. The First 24 is centered around a Taurus revolver, either the Judge in .45 Colt/.410 (as I tested) or a Model 617 chambered in .357 Magnum. Along with the revolver, the Columbia River Knife & Tool Sting survival knife is also included. This is a nice knife with a 3.25-inch, double-tapered blade that’s sharpened on both sides. The blade is black-oxide finished, and the handle is in the same tan earth tone like much of the rest of the kit. Attached to the knife’s lanyard hole is a 2.5-inch-long piece of two-tone, braided paracord. A ballistic nylon sheath with hook-and-loop fasteners provides a variety of ways to carry the knife.

Rounding out the kit is a 20mm compass, a Brite-Strike EPLI penlight that generates up to 220 lumens and has three settings: bright, low and strobe. It can run up to eight hours on AAA batteries, and six batteries are included. Also provided are three Brite-Strike APALS emergency lights. These are small LEDs in red and green that can be used for signaling or marking trails. They feature a visibility of up to half a mile and up to 80 hours of run time. There is a cutout in the interior for a box of .410 ammunition (not included). A Zippo fire starter and a pair of speed strips for .45 Colt complete the kit, which is housed in a SKB Sports waterproof case. The case is in the same tan earth tone and has a vacuum-breaker valve to allow it to be opened at a different elevation from which it was last closed. There are also two padlock holes, making the case legal for those who must carry firearms in a lockable case.

The revolver, of course, is the centerpiece of the kit, and I chose the Judge for my evaluation. First of all, I like the .45 LC/.410 chambering. The .45 LC is an excellent self-defense cartridge, and the Judge’s ability to also handle 2½-inch .410 shotshells gives it added versatility. Taurus introduced the notion of a dual-chambered revolver in .45 LC and .410 in 2007, so the gun itself isn’t new. What is new is the Judge included in the First 24 kit has been through the Aimpro Tactical custom shop, and it has received some upgrades that include a polished action that improves the trigger pull, polished and honed chambers that also have been chamfered for easier reloading, as well as jeweling of the hammer and trigger. The gun is finished in Aimpro’s XCOAT, which appears quite durable. According to Aimpro Tactical, that amounts to more than $110 in upgrades. This rendition of the Taurus Judge also features rubber grips with a pebbled finish in the palm area and finger grooves for enhanced control.

One of the things Aimpro does is check and adjust (if necessary) barrel-cylinder alignment; perhaps this has something to do with me getting groups as small as 3 inches at 15 yards. This would still not be my first choice as a gun to take out a hostage-taker with an eyeball shot at 15 yards, but that’s really not its intended purpose. This is a “get off me” gun—a short-range, self-defense weapon with the versatility to serve as a short-range game getter as well. It’s power in a reasonably compact package that is small enough to allow its owner to carry it constantly without an unbearable load.

It would be difficult—near impossible—to improve shotshell performance from the previous rendition of the Judge. There is only so much room in a 2½-inch .410 shotshell, and with just 3 inches of rifled barrel to launch the payload, one cannot expect a lot past 10 to 15 feet. Ammunition manufacturers have developed loads that perform better than standard birdshot hunting loads, and they were designed specifically for .45 LC/.410 shotshell firearms. Hornady’s Critical Defense .410 loads feature a .41-caliber FTX slug, along with a pair of .35-caliber (roughly 00 buck) hard shot pellets in its load. It is the ammo Taurus recommends for this revolver. Still, 15 feet is about as far as you would want to shoot and have any assurance that all three projectiles would hit the A-zone of a combat silhouette target—or a bad guy. With birdshot, 10 feet is a more reliable distance, making it marginal for game birds but satisfactory for dealing with snakes and other slow-moving vermin.

The First 24, with the Model 617 .357 Magnum revolver, carries an MSRP of $1,399; the Judge is set at $1,499. Street prices tend to run 10 to 15 percent less. While it isn’t a complete kit—I’d want some emergency water and food, as well as some shelter and weather protection in my total bug-out kit—the First 24 kit offers an array of tools that would serve anyone in an emergency, and it all comes in a robust package.