Colt Mustang XSP: A Next-Gen Take on the .380 Pocketlite

0
SHARES
247
VIEWS
Share on FacebookShare on Twitter
Colt actually invented the .380 pocket pistol back in 1908 (pockets were bigger back then) and continued to build them through WWII, with late models being issued as general officers’ guns, though mostly in the .32 ACP Model 1903 version.

Almost 50 years later, Colt introduced the groundbreaking Mustang .380; the pocket pistol was reborn in Colt’s own image as an essentially scaled-down Model 1911 without a grip safety. After 14 years and numerous variations, including the Pocketlite, Colt believed the market was diminishing and, with austerity in mind after some troubling times in the 1990s, decided the Mustang should be put out to pasture. That turned out to be a wrong-headed decision because soon after Colt abandoned the .380 marketplace everyone else decided to build a pocket pistol chambered in the same caliber. A dozen years later, the market was overflowing with .380 pocket pistols, so Colt decided it was high time to resurrect the Mustang Pocketlite. It first appeared in 2011 as a somewhat cleaner, better-built gun than the original. The new Pocketlite still paid homage to the original 1986 design, however, by not making any fundamental changes to the gun. That was both a good and a bad thing, because in many ways the original Pocketlite was no longer competitive in today’s market. Keenly aware of this, while Colt was filling the niche it had originally created by bringing back the Pocketlite, including a new model for 2013 that comes with a LaserMax laser guard (also available to retrofit older Mustangs), the company was busily developing an all-new Mustang variation, the XSP. 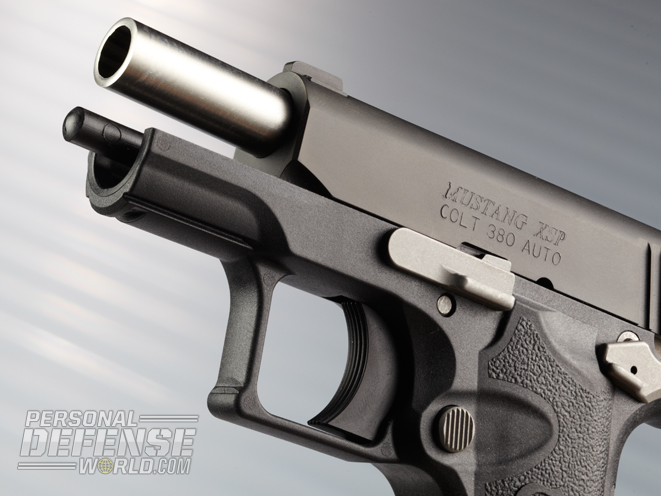 What instantly lets you know this is a new design is the fact that it barely looks like a Colt Mustang. The XSP sports a modern polymer frame, a bold, squared-off triggerguard, a larger grip profile, an integrated accessory rail under the dust cover, aggressive rough textured checkering on the front and backstraps and an undercut trigger guard to allow a little extra frontstrap surface for your hand. But the most important change to anyone who has owned and cherished an older Pocketlite is the single feature that makes the XSP so much better—a dovetailed (i.e., replaceable) blade front sight that you can easily acquire with the dovetailed notched rear sight. Add to that a revised ambidextrous safety that’s easy to operate and you have created a new breed of Mustang!

In its flat black, covert-looking guise, the XSP feels better in your hand, and it is a truly tactile difference since the grips are now integrated into the polymer frame. Being molded, the XSP grip frame allows deeper relief around a new, slightly enlarged, serrated magazine-release button that is easier to reach and use. The new ambidextrous safeties also have more relief around them for better accessibility. Finally, to make operating the matte-black, stainless-steel slide less demanding, the rear serrations are now a little wider to provide a more tactile surface. In every other respect it is the same great little Mustang single-action (SA) with a 2.75-inch barrel, a compact length of 5.5 inches, height of just 3.98 inches and a new lighter weight of 11.8 ounces (empty). That’s almost one ounce less than its aluminum-alloy-framed predecessor.

Overall, this is a pretty business-like handgun that exhibits none of the panache associated with the old Mustang. Instead it has a fresh, 21st-century visage that clearly levels the playing field with the competition. This is a whole new game. 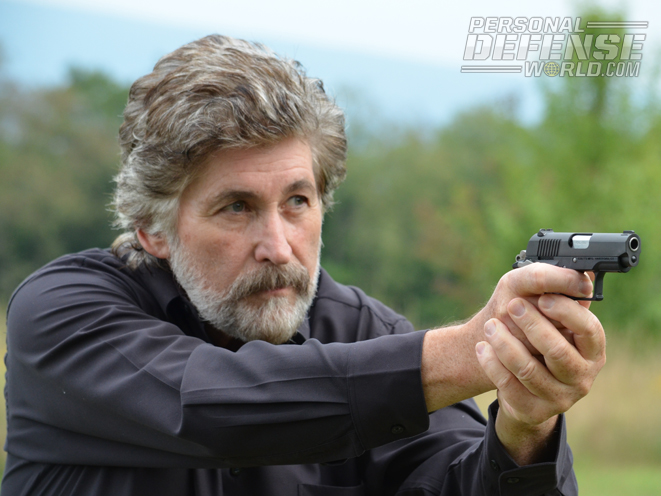 The trigger pull on the XSP was almost identical to that of the Mustang Pocketlite I had tested just a few weeks before, averaging 6 pounds with 0.19 inches of take-up, no stacking, very slight overtravel and quick reset. The XSP feels more hand-filling and the undercut triggerguard really gives you a firmer grasp by allowing the second finger to ride a little higher. 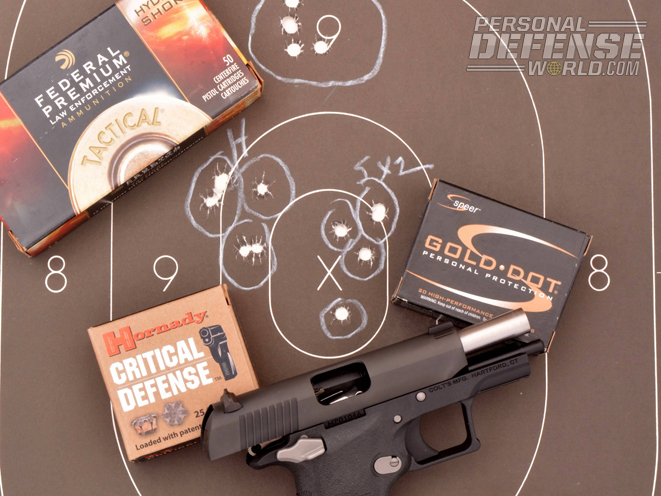 After running a box of Speer Gold Dot through the XSP to break it in and get a feel for its point of aim (POA), I started off testing the Hornady load, which placed five rounds at 1.25 inches, splitting the 9 and 10 rings at 9 o’clock. The best five with Speer Gold Dot (shifting aim to the “X” bullseye), landed on target in the “X” with a spread of exactly 2 inches, but with two overlapping and two below that all measured just 0.75 inches, thus making the last shot a flyer, if you will, 1 inch below the four-round group. With the “X” bullseye a bit crowded, I shifted aim to the 9 ring at 12 o’clock and snapped off five rounds of Federal Premium, always a decidedly accurate round in .380. The group measured 1.25 inches at POA. Every shot from every brand of ammo would have been a threat deterrent, if not a fight ender, in a self-defense situation. That’s exactly what the XSP is made to do.

While I hate to denigrate an iconic pistol like the Colt Mustang, I’ve never been satsified with its sights. The Colt Mustang in its not-so-shiny new coat of armor has risen above that with good, easily acquired front and rear sights. While that would have been the only obvious improvement needed to make the Pocketlite better (since the laser guard was already in the works), Colt has instead taken the entire gun and reinvented it. A world of empty pockets awaits.