Kimber is well known for its high-end 1911 pistol and rifle lineups. But when the company saw the burgeoning market for concealed carry handguns that has developed in this country, it set about providing a product to satisfy it. The result was the Kimber Solo Carry.

The Solo is unlike other subcompact 9mm pistols. While polymer frames are all but de rigueur with the competition, Kimber produced a pistol with an alloy frame that does not need any alloy/steel inserts to strengthen it, while the rails can be machined integrally, both of which provide greater overall strength. Separate grip panels and 1911-like ergonomics also set it apart from its contemporaries. The slide is made from stainless steel and carries a set of three-dot sights and a generously proportioned ejection port. The exterior of the pistol is “melted” to remove sharp edges.

Like many of its contemporaries, the Solo is a striker-fired design. The trigger stroke has a bit of takeup before the striker is released by a light let-off. It has an ambidextrous thumb safety that is well positioned for easy manipulation but small enough not to compromise drawing from concealment. Cartridges are fed via a six-round box magazine, and its ambidextrous bona fides are further enhanced by magazine releases on both the right and left sides.

One of the newer additions to the Solo line is the Solo Carry DC (LG), a carry-ready compact pistol with an all-black DLC (diamond-like carbon) finish for toughness and low visibility. The LG variant comes equipped with a pair of Crimson Trace Lasergrips for enhanced targeting. All in all, this is a very appealing variant of the popular Solo Carry line.

For the purposes of testing, Kimber provided me with a standard Solo Carry to evaluate for our readers. I was impressed with the pistol’s size, or should I say lack of size. At only 5.5 inches long and weighing a mere 17 ounces unloaded, the Solo really is tiny. Quality of materials, fit and finish were all top notch, as you would expect from a company with Kimber’s reputation. 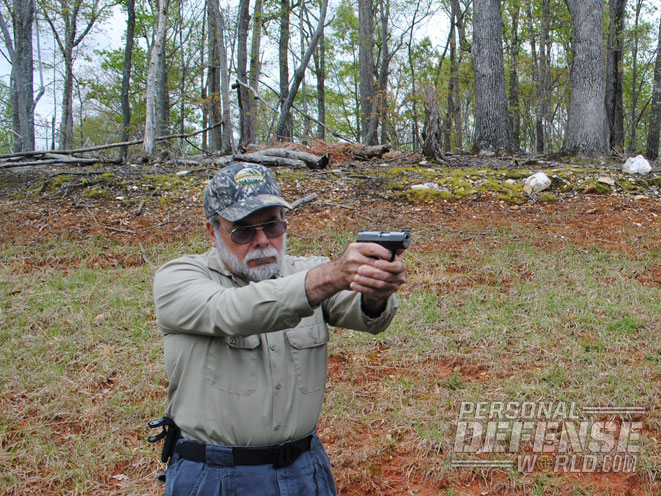 Accuracy testing was conducted from 15 yards with three different brands of 9mm ammunition. The Solo showed a definite preference for heavier projectiles and Winchester’s 147-grain ammo took honors. Kimber recommends that you only use quality ammunition loaded with bullets no lighter than 124 grain in the Solo. While other ammunition may perform well, lighter bullets and inconsistent pressures that can be found in lower-quality ammunition may lead to decreased slide cycle time and compromise functioning.

I believe that Kimber’s line of Solo pocket pistols would provide very practical choices for civilian CCW or deep-cover carry by law enforcement officers, and it’s a pleasant change for those shooters who still prefer all-metal handguns.

Let’s face it, when the word “Kimber” is mentioned, I’m sure most shooters visualize one of the company’s 1911 pistols. And Kimber has not forgotten that many civilian CCW holders and plainclothes police officers favor the 1911 platform also, and in response it offers a wide variety of compact 1911 pistols. Let’s check out some of these mini Kimbers.

Kimber’s Master Carry Ultra is built on a lightweight aluminum frame that reduces weight to 25 ounces. An extended beavertail grip safety helps in controlling recoil, while the Round Heel Frame reduces “signature” and makes for a more comfortable-shooting compact pistol. It comes standard with Crimson Trace Master Series Lasergrips for fast target acquisition.

Like the Master Carry Ultra, the Kimber Ultra Covert II has a 3-inch barrel and a matte black steel slide, but the digital camo Crimson Trace Lasergrips gives it its own distinctive look. The aluminum frame has a Dark Earth KimPro II finish that goes well with the grips, while the checkered frontstrap and mainspring housing provide a firm purchase.

The Kimber Ultra Raptor II is another 3-inch-barrelled gun. The pistol’s textured frontstrap, uniquely patterned grasping area on the slide and scaled grips combine to give it a distinctive look while improving handling. Like all Kimber 1911s, the ejection port has been lowered and flared to ensure reliable ejection. The ambidextrous thumb safety and beavertail grip safety with palm swell allow you to get the pistol into action quickly while improving recoil control.

For those who need a pistol for deep-cover carry and insist upon a 1911-style platform, Kimber’s Custom Shop offers the Ultra RCP II. To maximize concealability, the frame and slide have been “melted” to remove all sharp edges while the grip safety and magazine release are bobbed. The mainspring housing and frame are rounded off, and a sighting trough on top of the slide replaces standard sights. It’s a .45 ACP, and it holds seven rounds!