Though ultra-compact and lightweight, the Magnum Research Desert Eagle 1911U is pinpoint accurate.

A few years back, Kahr Arms purchased Magnum Research, Inc (MRI). Known primarily for its iconic .50-caliber Desert Eagle, MRI also imports several different varieties of semi-auto pistols from Israel. The company’s 1911-style guns are manufactured by Bul and the Baby Desert Eagle pistols are made by the prolific Israeli Weapons Industries (IWI). Three of MRI’s compacts will be of interest to readers of POCKET PISTOLS: the 1911U, a compact, lightweight, 3-inch-barrelled gun that boasts many custom refinements not normally found in a gun in its price range; and two Baby Desert Eagles, both compact, with one featuring a steel frame and the other a polymer frame.

I had a chance to review the 1911U (“U” for undercover) and was favorably impressed. It is a SA semi-auto .45 ACP built on an aluminum frame for weight savings and uses a 3-inch barrel for an extremely compact, lightweight concealed carry gun that packs a serious punch. 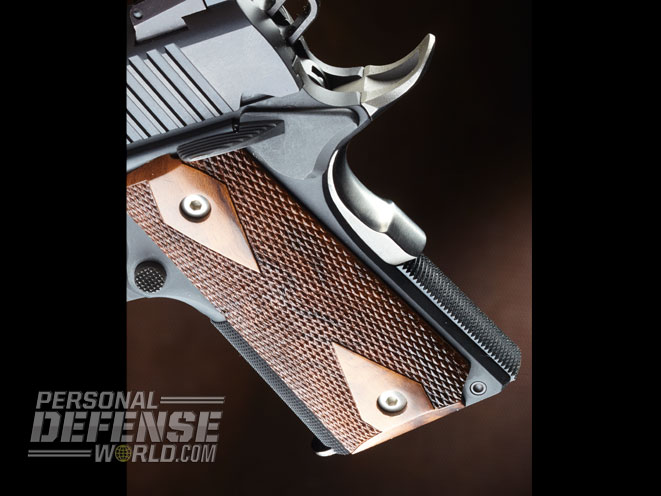 The fit and finish of my evaluation sample exuded quality! Frame-to-slide fit is impeccable. The gun also possesses a matte black finish. For contrast, Bul outfits the gun with a stainless steel grip safety, aluminum trigger and hex-head screws that attach the double-diamond wood grips.

The 1911U possesses some value-added features that make this pistol extremely attractive for those looking for a compact 1911 concealed carry gun. For starters, the frame’s frontstrap is machine checkered at 30 lines per inch (lpi). The frame is also undercut at the junction of the frontstrap and triggerguard, allowing the shooter’s third knuckle to ride higher for comfort. Used with the high-sweep grip safety, the shooter can get a nice high grip on the gun. Bul also fits an extended thumb safety to the 1911U. It snicks on and off every bit as crisply as the trigger, which, by the way, breaks at a very clean 3.25 pounds. There is no firing pin safety on this Israeli import. Its trigger tracks cleanly without any vertical or horizontal wobble and has been adjusted for zero overtravel. 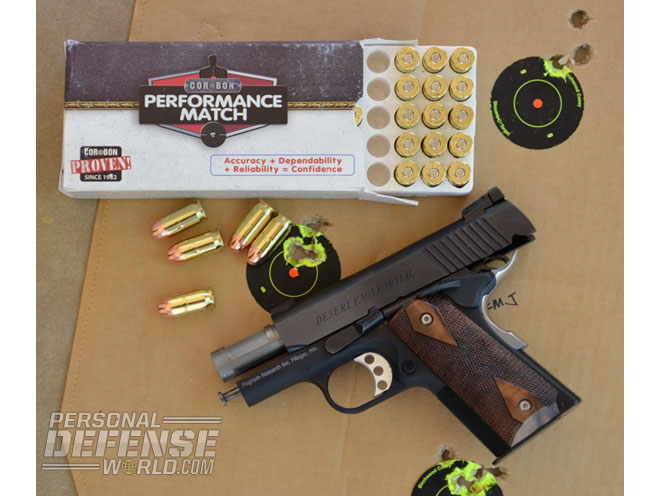 I did all of my accuracy testing of the 1911U with my targets set up at 15 yards. From a seated rest and using a Millett Benchmaster for support, I fired five rounds to a group. My first group was 1 inch low and 2 inches left of point of aim. I made the necessary adjustment on the rear sight with a screwdriver and my next group obliterated the Shoot-N-C target. In a short amount of time, I discovered the 1911U to be one of the most accurate 3-inch-barrelled .45 ACPs I’ve ever tested.

Overall, I was very impressed with the 1911U. For a gun in its price range it boasts a host of custom features and proved itself to be accurate, lightweight and reliable. With a suggested retail price of just $946, it will be difficult to find another gun with as many refinements at a lower price.

The Baby Desert Eagle II compacts use a shortened 3.64-inch barrel and also have an abbreviated grip frame. Capacity of the Baby Desert II Eagles in 9mm is 12+1, as compared to the 15+1 capacity of the full-size version. Two magazines come with each pistol and 10-round magazines are supplied where required by law.

With a loaded weight of over 40 ounces, the steel-frame Baby Desert Eagle II is not lightweight, but its heft gives it a solid feel. By comparison, the polymer-framed Baby Desert Eagle II is 25-percent lighter, or over a half pound less in weight. IWI molds grenade-style checkering into the front- and backstraps for a secure grip. Trigger pulls on both guns runs from 12 to 13 pounds on the DA first shot to 4.5 to 5 pounds for the SA pull. Combat-style, three-dot sights are standard on both guns.

While Magnum Research is best known for the huge handcannon we know as the Desert Eagle, its Baby Desert Eagles should command the attention of anyone looking for accurate and reliable concealed carry pistols.