Kahr’s new CT45 packs 7+1 rounds of .45 ACP firepower into a reliable design that is also very affordable, making it a great CCW option.

Kahr Arms has some exciting things happening of late that all concealed carriers will want to know about. Not only has the company started a Value line of guns with prices that make them eminently affordable, it has also increased its production capabilities and is set to open a new production plant in northeastern Pennsylvania.

Those familiar with Kahr’s lineup of pistols know it primarily for its line of subcompact guns. In fact, every Kahr pistol I own has at one time or another been carried in a pocket. But the company also makes some larger semi-automatic pistols that deserve recognition.

I spoke with Kahr’s vice president of sales and marketing, Frank Harris, and he said, “We’re trying to break the perception that we only make pocket pistols. We want people to know that we make full-size guns which compete with Smith & Wesson and Ruger.”

Harris was referring to the new Kahr CT45, a polymer-framed, striker-fired, single-stack, semi-automatic pistol, which, in addition to its slim profile, also possesses a buttery smooth double-action-only (DAO) trigger.

Harris said, “The CT45 is based on our TP45. We’ve been doing the TP series of guns for a number of years now. It is our largest gun and we also offer the pistols in 9mm and .40 S&W. The CT45 is a more affordable version of the TP45.”

Kahr Arms is making a big commitment to offer more affordable guns to shooters. The company’s Value line of guns is the result.

“We’ve seen a huge upsurge in the Value series. People are very price conscious in the market right now. First-time gun owners don’t want to spend more than $500 for a pistol. Kahr has seen a lot of competition in the last three years, and we are responding to it,” said Harris.

The suggested retail of the CT45 is $449, making it Kahr’s lowest priced large-caliber gun. It also makes the gun very competitive with other polymer-framed guns in the market.

But you’re probably wondering what you’re giving up by buying the CT45 instead of the TP45 (or TP9 and TP40). The TP45 retails for $697, or $248 more. Kahr ships its premium guns, like the TP45, with three magazines. The CT45 comes with just one magazine. Other magazines go for about $40 each. The TP guns also come with a nice plastic pistol box. Kahr ships the CT line of guns in a cardboard box.

Kahr uses a Lothar Walther polygonal-rifled barrel on the TP45, which are renowned for their accuracy. The CT45 uses a conventionally rifled barrel. Is there any real difference in practical accuracy? I think you’d be hard pressed to find it. Harris says that some people prefer the conventional rifling because they want to shoot lead ammo, which can increase pressures in a polygonal barrel and is not recommended.

While the polymer frame is the same, there are a number of differences with the CT45’s slide. Kahr engineers designed the slide to use less machining operations so it occupies less time in the CNC machine. It looks a little blockier, but how much does that really matter to you? Slide markings on the CT45 are made with a rollmark rather than a laser, which the premium Kahr pistols are marked with.

The front sight of the CT45 is a polymer part staked into the slide, rather than dovetailed like the more expensive models. This is probably something you should consider if you would like to have night sights installed on your CT45.

Finally, the slide stop lever on the CT line of guns is a metal-injection-molded (MIM) part as opposed to a part machined from barstock. So, those are the differences between Kahr’s premium TP line and the more affordable CT line of guns. Your choice will depend on your needs and wallet. But let’s take a more in-depth look at the CT45. 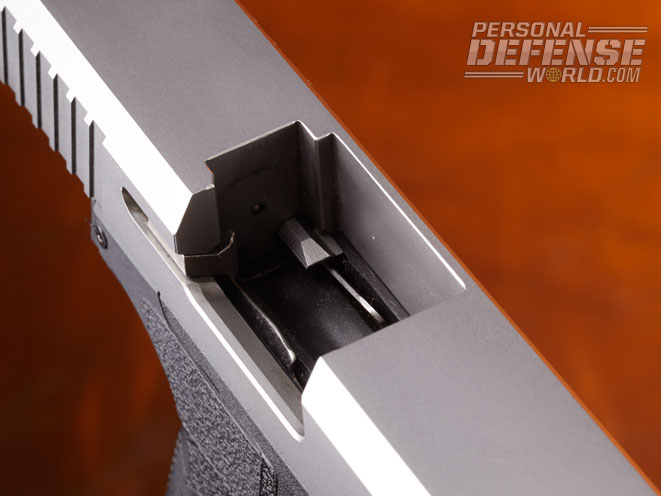 The CT45 is every bit as tall as a 1911, and its slide is actually just a hair thicker. But it is nearly a pound lighter than a steel-framed Government Model, and the grip frame is about 0.3 inches slimmer. There’s no grip safety, thumb safety or external hammer to clutter the CT45’s lines or snag on clothes. The only external protuberances on the Kahr pistol are the magazine release and the slide stop.

It’s a lightweight gun that feels good in the hand thanks to its full-size dimensions. It also sits low in the hand due to Kahr’s patented offset barrel lug, which allows the trigger bar to ride next to the barrel lug rather than under it. This dramatically reduces the pistol’s height and puts the hand closer to the bore’s axis, thereby reducing muzzle flip.

There’s a steel sub frame that is actually molded into the polymer frame. The slide rides on exposed steel to prevent any metal-to-plastic contact, which could cause accelerated wear. Raised grenade-style checkering provides a secure grip on both the front and back straps while the side panels have a light texture.

Disassembly for cleaning is a quick and easy matter. After removing the magazine and clearing the chamber, pull the slide back until the witness mark on the left side of the slide lines up with the dot on the polymer frame. Push out the slide stop. Point the gun in a safe direction, pull the trigger and then pull the slide forward off the frame. Push the recoil spring and guide toward the muzzle and remove from the bottom of the slide. Push the barrel toward the muzzle, until the breech block can drop down, and pull the barrel from the slide. This is as far as you should ever disassemble your CT45. Reassembly is in reverse order, but one important thing is to make sure the slide stop slips under the slide stop spring when reinserting it.

The CT45 is a striker-fired gun, and it possesses a smooth, albeit long trigger pull. Without a manual safety, the Kahr engineers wanted to make sure the gun only fired with a deliberate pull of the trigger. There is a passive striker block safety that mechanically blocks the striker unless purposeful pressure is placed on the trigger. My test sample’s trigger pull broke with 5 pounds of pressure, and it is consistent from first to last shot. While 5 pounds may sound heavy to some, I had absolutely no problem keeping the sights aligned as I pulled the trigger through its arc. My targets were set out at 25 yards, and I used a Millett BenchMaster to stabilize the gun as I fired from a seated rest.

As my test results proved, the use of the conventionally rifled barrel caused no ill effects on accuracy. My best group was under 1.5 inches with Black Hills 185-grain jacketed hollow point (JHP) ammo, which shows what the CT45 is capable of. It is an accurate defense pistol! 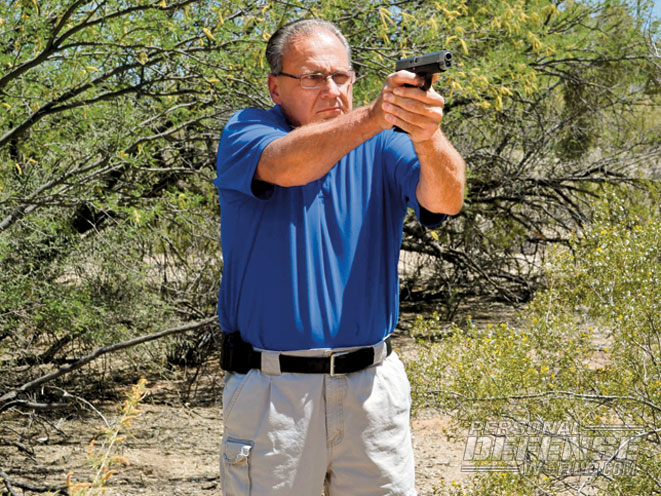 Like I said earlier, while Kahr Arms is known for its pocket-sized pistols, the CT45 is by no means a pocket gun. And, while it makes a great concealed carry gun, a proper holster is needed. I contacted Galco Gunleather’s Mike Barham. He suggested a TacSlide Belt Holster. For a lightweight carry gun like this, I also wanted a lightweight, minimalist-style holster, and the Tac Slide fits that bill! The TacSlide features a steer hide platform with two belt slots to which a Kydex holster pocket is affixed. I like the holster’s neutral cant, straight up and down, and it provides a quick and unimpeded presentation. The length between the belt slots is far enough apart that it pulls the holster and gun tight against the side for easy concealment with a layered shirt or garment. Because of the rigid nature of Kydex, re-holstering the gun is a simple matter.

With my steel targets set up at 15 yards, I practiced drawing from the TacSlide and placing controlled pairs on the steel as quickly as possible. I hesitate to even include these numbers as it is more a comment on my ability rather than the CT45’s. For what it is worth, my average draw time to first shot, including reacting to the buzzer, was 1.3 seconds. My splits, or time between shots, averaged 0.3 seconds. Being a 1911 guy, it didn’t take me quite as long as I expected to get used to the CT45’s long trigger, and my hits and times rivaled those I experience with a full-size, steel-framed 1911. I found the CT45 to be very controllable, a fact I attribute to its low bore axis, which effectively negates muzzle flip. Its grip is also very comfortable. As I mentioned earlier, the circumference of the CT45’s grip compared the 1911’s is smaller and allows an average-sized hand like mine to make a more secure grip, which enhances operator control. Despite the myriad of defense loads available, each with different bullet-nose configurations and overall lengths, the CT45 was 100-percent reliable and I experienced no stoppages or malfunctions on the range. 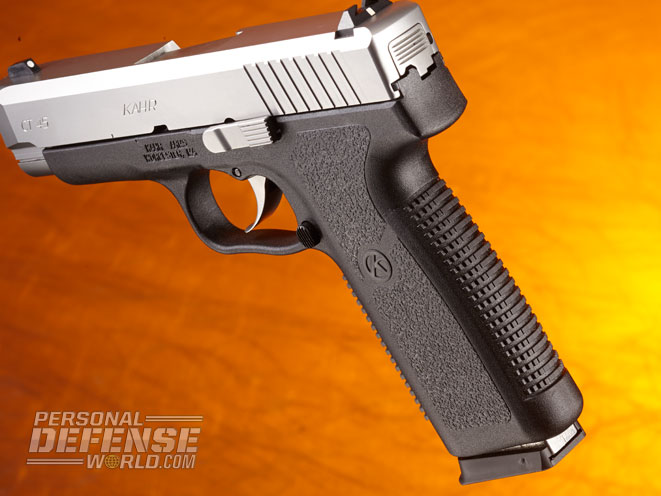 I’m impressed with the Kahr CT45. It provides defensive pistol users with an affordable solution to a need for a lightweight, concealable, controllable and accurate gun that packs a .45-caliber punch! The gun I tested was just one of many new guns and calibers in Kahr’s new Value line.