by Matt Berger
in Guns
0

The Ported .22 Mag from North American Arms is an excellent hideout gun because it’s extremely compact yet packs capable firepower.

0
SHARES
271
VIEWS
Share on FacebookShare on Twitter
Ironically, the first mini-revolver has its beginnings in the design work of a man who has since become more well known for his monster revolvers at the other end of the spectrum—Dick Casull.

Casull’s design began life at quite less than 4 inches in overall length, produced in 1971 by the Rocky Mountain Arms Company. The company’s production run lasted a scant two years. However, North American Arms (NAA) saw the potential in the mini and resurrected the design in its first .22 Short revolver. NAA would eventually move its headquarters to Provo, Utah, and create not only an entire variety of mini-revolvers, but also ultra-compact semi-autopistols. The next progression from the first .22 Short revolvers and .22 LR guns would be making little powerhouses in .22 Mag. It was only logical that this would be followed by creating .22 Mag revolvers with barrels ported to help counter the magnum muzzle flip by venting gases upward, helping to stabilize the revolver during firing.

Having done just that, NAA is now offering Ported .22 Mag Mini-Revolvers in barrel lengths of 1.13 or 1.63 inches. NAA also offers these revolvers with cylinders to convert them from .22 Mag to .22 LR. I was recently able to obtain a 1.13-inch-barreled model for testing, which came in a padded hard case with a convertible .22 LR cylinder.

With its ported, 1.13-inch barrel, the Ported .22 Mag has an overall length of only 4.75 inches and an unloaded weight of a mere 5.9 ounces. The barrel is machined from 17-4 stainless steel bar stock, has 1-in-12-inch-twist rifling with eight lands and grooves, and features three ports on each side along the top the barrel.

The cylinder pin, installed directly under the barrel, has a knurled exterior portion with a spring-loaded release button at its end. The revolver’s sights consist of a rear notch cast into the rear of the frame and a stainless front bead over the muzzle end of the barrel.

The Ported Mini-Revolver’s cylinder is also machined from 17-4 stainless bar stock. The oversized rubber grip features a rounded butt and a pebbled texture, which provides a soft, tacky grasping surface.

The frame, machined from an investment casting in 17-4 stainless steel, bears the legend “NORTH AMERICAN ARMS PROVO, UT” and “.22 MAGUM” at the rear on the right side. Protruding below the trigger housing tang portion of the frame, the trigger features no guard. The sides of the frame are brushed, while the bottom of the revolver has a flat matte finish, as do the barrel, hammer and trigger. The hammer and trigger have serrations with prominent vertical lines bisecting the serrations. These are not casting burs—they’re intentional aesthetic touches. All of the smaller internal parts are made from metal-injection moldings. All in all, the fit and finish were very good.

Given that the Ported .22 Mag is single-action only—as with all of the Mini-Revolvers from North American Arms—a triggerguard isn’t necessary, which reduces the gun’s mass. And, as with all of the Mini-Revolvers, it may be safely carried with all five chambers loaded due to the safety notches on the cylinder. The notches are situated between each chamber, and the hammer can be lowered into each notch, thus locking the cylinder in place with chambered rounds on either side of the resting hammer. Hence, loading the gun is as easy as bringing the hammer to half-cock and then carefully lowering it into one of the safety notches. 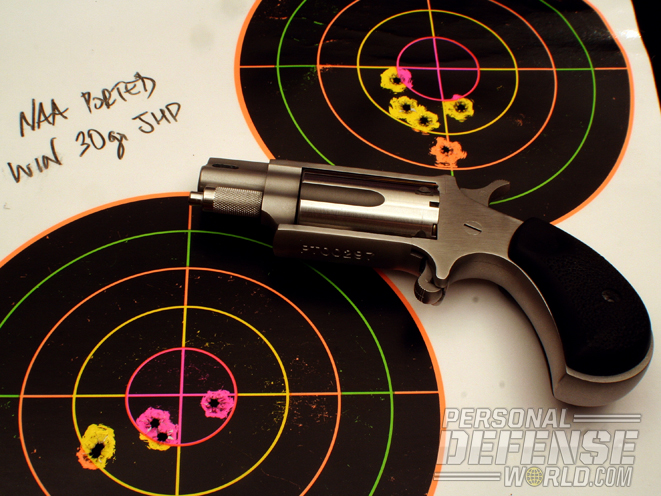 I headed out to the range to find out how the little .22 Mag would perform. Designed for defense at close quarters, an appropriate firing distance was in order. I chose to fire five-shot groups from 3 yards to evaluate the gun’s practical accuracy. For targets I used 3-inch Champion Visi-Shot bullseye targets.

These tiny Mini-Revolvers are prone to sharp muzzle flip, especially with magnum loads, and I long ago discovered that the key to delivering accurate fire with these mighty mouse guns is a very tight grasp on the gun—I’m talking white knuckles.

The best group of the day came from Winchester’s 28-grain JHP, with all five rounds clustering into an even inch. At a close second, Winchester’s 30-grain JHP turned in a pattern of 1.13 inches. Remington’s 33-grain AccuTip and 40-grain JHP loads funneled into 1.44 and 1.5 inches, respectively. 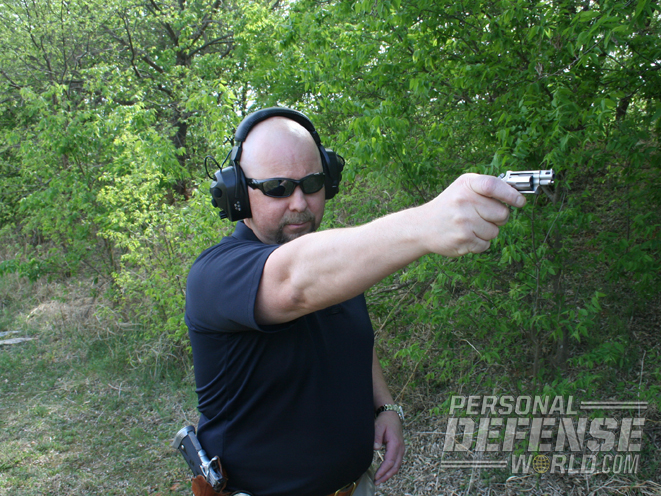 The recoil was snappy, but not beyond the realm of control; the main effect was the aforementioned muzzle flip, but compared to other NAA mini magnums I’ve tested, I think the porting did take the edge off of the flip. The bead front sight is easily aligned in the notch at the rear of the frame for an effective sight picture, and the trigger was plenty light, breaking crisply at 3.25 pounds. The hammer was also easy to thumb back into the cocked position.

With the accuracy testing out of the way, I used my chronograph to test each load for its average velocity. Next, I had some fun doing a little plinking with the Ported .22 Mag, and then I fired a five-shot group from 3 yards as fast as I could thumb-cock and trigger the shots. All five shots landed within a pattern I could have covered with my hand. This is significant, as it replicates the way this gun would most likely be used in a pinch.

Keeping the gun running is simple once you see how it operates. Loading is accomplished by placing the hammer at half-cock, then grasping the knurled surface of the cylinder pin and depressing the release button at the forward end of the pin. The pin may then be withdrawn and the cylinder removed from either side of the frame. After cartridges are dropped into the chambers, final loading may be accomplished by simply reversing the procedure and ensuring the pin is fully seated against the frame. It’s not really complicated, but you’re not going to reload this pocket revolver in a hurry.

After firing, I’ve found that removing the cylinder and using the cylinder pin to push the spent casings out of the chambers works best. Most .22 LR cases only require a bit of a nudge with the pin when firing with the .22 LR cylinder, but when using the .22 Mag cylinder, some cases need to be knocked out with some authority with the pin. Switching the cylinders is no more complicated than inserting the other one when reassembling the Mini-Revolver.

It was no surprise that the gun never failed to go bang when fired. As with every other NAA Mini-Revolver I’ve tested, the Ported .22 Mag ran reliably.

The Ported .22 Mag was accurate, reliable and, above all, supremely easy to carry and conceal. You can carry these little guns in your pocket all day, and you might even forget that they’re there. The ported barrel did seem to help reduce the muzzle flip, typically very pronounced with these light little powerhouses. With its quality fit and finish, this is a handsome little devil, and it gives you the biggest bang for your buck.