"Not long ago, Sig Sauer decided to add another horse to the P250 stable. In the wake of the concealed-carry boom, the company introduced a P250 Sub-Compact chambered in .380 ACP."

Over the last decade, firearms manufacturers, especially handgun makers, have awoken to the fact that the terms “concealed carriers,” “military personnel” and “law enforcement officers” are gender neutral and convey no information at all about the user’s stature or ability.

This realization, in conjunction with the boom in concealed carry, has driven numerous major brands to develop smaller handguns in potent calibers. Additionally, in an effort to broaden their wares beyond the requirements of a specific hand and body size, many have developed pistols with adjustable backstraps—an idea not too novel today, perhaps, but a milestone when first conceived. As someone whose hands are in the medium range, I think it’s a bang-up idea!

In 1998, Sig Sauer—known for making numerous all-metal, solid, super-reliable pistols historically regarded as some of the best handguns around (ask many elite military units!)—introduced its first polymer-framed pistol. The SigPro, offered in mid-1998, included two features novel for the time: an integral Picatinny rail and two interchangeable grips.

The next polymer shooter from Sig Sauer was the P250, arriving in 2007. During a visit to Sig Sauer that year I had the good fortune of being allowed to shoot a few early models. I remember being struck by the excellent trigger and the gun’s consistent performance as it morphed from configuration to configuration.

Other than the use of polymer, the new P250 bore few familial traits to the SigPro. The P250 was Sig Sauer’s effort to create a modular (not just using interchangeable grips) pistol that’s easily customizable. Users could simply buy one size and then readily convert it to fit their present needs. This yielded any number of variations of the P250—changes in size, caliber and purpose—but all featured the exact same trigger, because the metal, serial-numbered trigger module was never changed, only moved to the new grip frame.

Sig Sauer has had success with the P250, garnering a crowd of fans and supporters. There are three different frame sizes (Full Size, Compact and Sub-Compact), with a variety of grip sizes available for the Full Size and Compact frame sizes. No replaceable backstraps here! The Sub-Compact ships with just the small grip frame, adorned with a nicely rounded triggerguard.

Not long ago, Sig Sauer decided to add another horse to the P250 stable. In the wake of the concealed-carry boom, the company introduced a P250 Sub-Compact chambered in .380 ACP.

The .380 ACP cartridge has long been considered by “those in the know” as the minimum for defensive use. Given the large number of high-performance, defensive .380 ACP loads available today, the cartridge has no doubt experienced an uptick in effectiveness. Still, the cartridge is not quite in the same class, power-wise, as the 9mm or .45 ACP. Recognizing this, and realizing that for many, pocket carry is their only option, Sig thoughtfully chose to fill its standard, comfortable Sub-Compact frame (i.e., the same used on the 9mm and .40) with a flush-fitting, metal, double-column magazine carrying 12 rounds above the polymer baseplate.

This is where reality raises its often-ugly head. First, all handgun calibers are poor performers, with an excellent probability of a single round, or even several, leaving an attacker still capable of doing harm. This leads to the maxim: Stuff as much ammo as possible into your handgun and be able to hit accurately with every round. Secondly, the .380 ACP is often touted as a light-recoiling cartridge, perfect for the recoil sensitive, but in any pistol light enough to go unnoticed in a jacket pocket, recoil is likely to be substantial. Finally, blowback pistols—the system used in most .380 ACPs and their smaller brethren—by necessity use heavy recoil springs, increasing the difficulty of cycling the slide for those with lesser hand strength.

Sig Sauer did not stop after giving the P250 Sub-Compact a 12+1 capacity of .380 ACP. The company retained the locked-breech design, engendering it with better recoil control and no monstrous recoil spring to be overcome by those with weaker hands.

Because the P250 Sub-Compact is not a tiny, drop-it-in-your-pocket-and-forget-it-sized pistol, Sig Sauer’s .380 ACP pistol has a grip long enough to aid in control and big enough to accommodate a fairly decent grip. The triggerguard is rounded, and the grip area exhibits patches of skateboard deck tape-like texturing on both sides and the front and backstraps. This provides for an excellent gripping surface, in dry conditions or wet, for larger calibers such as the 9mm and .40, which means it should excel for the .380 ACP.

The magazine well is generously notched on the sides to facilitate the removal of stuck magazines. Following in the P250 bloodline, the .380 ACP is a true double-action-only (DAO) pistol with a second-strike capability and no extraneous controls—only the trigger, the low profile and ambidextrous slide release, the magazine release and the disassembly levers. As an enhancement for lefties, the P250’s magazine release is reversible. The sveltely bobbed hammer only protrudes from the back of the slide during trigger action.

The DAO trigger is wide and not serrated, requiring 5.9 pounds of pressure to break smoothly. I equated the feel of the P250’s trigger to that of a nicely polished revolver’s—it’s that nice!

Because of the size of the pistol, the low-profile, high-visibility SIGLITE night sights are large enough to provide an excellent sight picture. Both are dovetailed into the slide and use a three-white-dot system. As a thoughtful touch, the rear sight is shaped to facilitate one-handed slide racking. Oddly, the rear sight is dovetailed into the slide from the rear, rather than from the side. The sight is designed so it can be removed to accommodate the installation of other versions, but I did not delve into the mechanics to determine what was involved. The steel slide is finished with Nitron, a form of diamond-like carbon.

The external extractor protrudes slightly with an unloaded chamber and a fraction more so—to a degree insufficient for tactile surety—when a round is chambered. A full-length recoil spring guide rod rides beneath the 3.6-inch barrel. Speaking of barrels, the .380 ACP Sub-Compact’s hood is fluted on the top and the sides, lightening it to ensure reliability, and the muzzle is mated directly to the slide.

The P250 Sub-Compact ships with two 12-round magazines. Additional magazines, including a 15-round extended version, are readily available. The extended magazine would be excellent for backup uses. 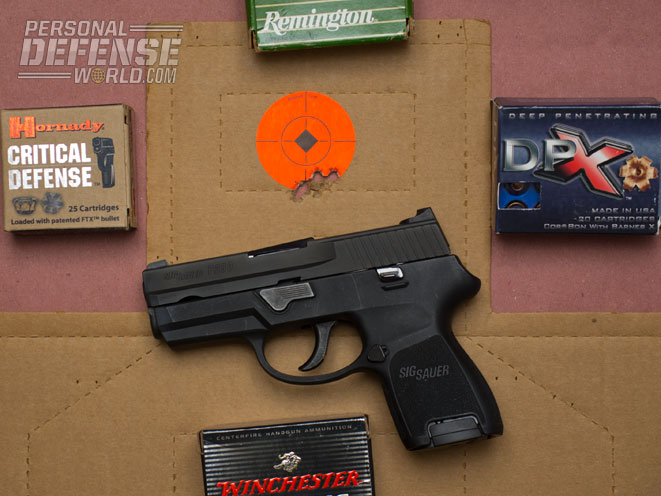 With the first shot I fired, I knew the P250 Sub-Compact was a pleasant shooting pistol. The lighter recoil of the .380 ACP round, combined with the pistol’s locked-breech action, weight and size, made the entire shooting session a demonstration of the fact that this pistol could be handled by virtually anyone looking for an eminently controllable defensive handgun. My little finger dangling partially off the bottom of the grip proved to be no handicap.

The pistol’s accuracy at 15 yards varied from 1.49 inches to 1.93 inches for three 5-shot groups, with the best group averaging 1.56 inches. This is nothing to sneeze at! While dot-the-i accuracy is not necessary for a defensive handgun, it is important to have as much accuracy as possible for special circumstances without compromising reliability. 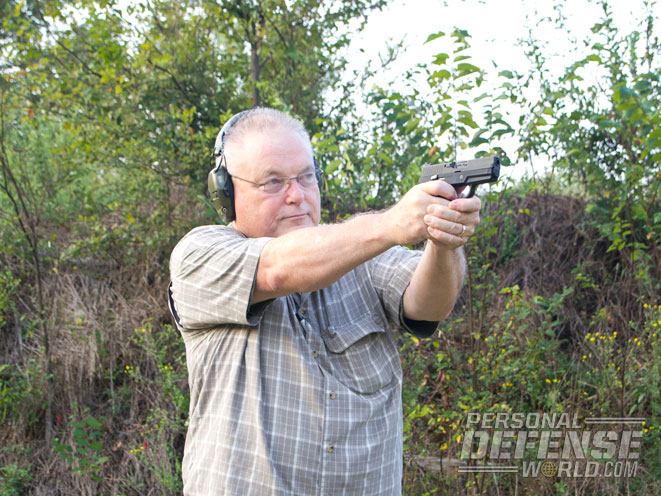 Controllability for follow-up shots is crucial in a defensive situation, especially with handguns, and every shot fired must strike the target to avoid bystander injury. The sooner the hydraulic system runs out of pressure, the sooner the threat of taking an errant shot dissipates. During drills it was easy to make surgically precise first shots at reasonable distances out to at least 15 yards and then follow with repeat shots. The Sig Sauer P250 Sub-Compact .380 offers quick, controlled, accurate follow-up shots. It repeatedly rang steel at 25 yards. Working the smooth action of the trigger produced excellent groups at 15 yards, though some credit is also due to the well-appointed sights. In keeping with the longer barrel, the P250 produced the highest velocities of any .380 ACP pistol I have tested.

A nice consequence of the P250 Sub-Compact being built on a standard 9mm/.40 frame is the additional versatility the platform adds to the mix. A user can begin their shooting experience with the .380 ACP and add a 9 mm/.40 upper as their experience and needs change!

I had no holsters on hand to test with the P250, but a quick check found an ample supply ranging from ankle and belt carry models available from all of the usual suspects in the holster world. 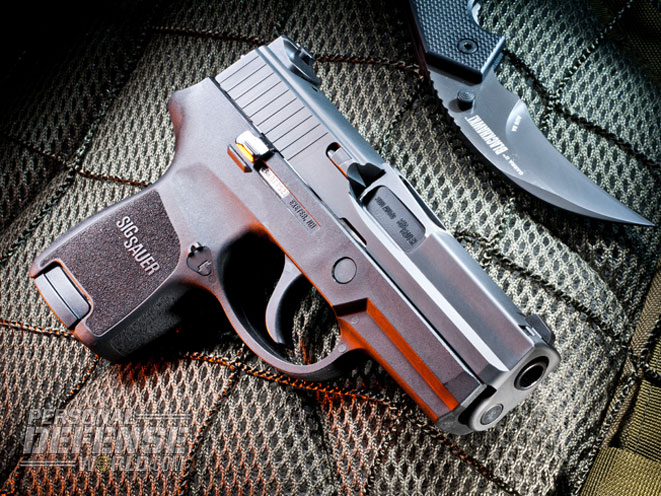 As I said, the Sig Sauer P250 Sub-Compact in .380 ACP is a real shooter! Controllable, accurate, reliable and quite portable, it is an excellent defensive firearm for anyone, but it’s an especially good choice for those who are recoil sensitive or lack the hand strength to manipulate smaller blowback-operated pistols. Actually, it should work great as either a primary carry or backup firearm.

I am a big fan of the Sig Sauer P250 series of pistols, and the .380 ACP Sub-Compact does not disappoint. Retaining all that’s great about the P250 line of guns, the .380 ACP provides Sig Sauer’s signature accuracy and reliability to a wide variety of users.