How to Take Down an Active Shooter with a Knife

Knife vs. shooter: A knife can be a very effective weapon for taking down an active shooter. Used properly, it stops the threat immediately and does not pose a risk of collateral damage.

0
SHARES
0
VIEWS
Share on FacebookShare on Twitter
According to the FBI statistics, the average active-shooter incident lasts 12 minutes. More than a third of such incidents (37 percent) are over in less than five minutes and 43 per-cent of them are over before law enforcement arrives on the scene. Based on these statistics, one truth is painfully clear: If you are caught in an active-shooter incident, you will probably be on your own. You will also be working with whatever resources you have on hand, most likely whatever you’re carrying on your person.

Obviously, the best way to stop a shooter is to be a shooter; however, in an environment filled with other innocent people, that’s easier said than done. Also, since active shooters often purposely target non-permissive environments where the lawful carry of firearms is prohibited, going to guns may not be an option.

One alternative weapon that can often be carried where firearms cannot—and can be used safely and selectively in close proximity to others—is the knife. Knives are unique in that they not only offer lethal capacity, but when used properly, they can also be used to immediately incapacitate an attacker, stopping the threat instantly. This is an important distinction since killing and stopping are not the same. In a situation where one more trigger squeeze could mean the loss of an innocent life, stopping the threat must take priority.

Another reason that stopping is more important than killing is that you will be fighting with the knife you actually carry in your pocket every day—not the sword on your mantle or the Bowie in your gun safe. In all probability, that means you will be armed with a small-bladed, legal-to-carry tactical folding knife. And while such knives can certainly be deadly, they are rarely instantly deadly. Even a mortally wounded gunman can continue to take multiple lives while he bleeds out, so anything short of an instant stop isn’t good enough. 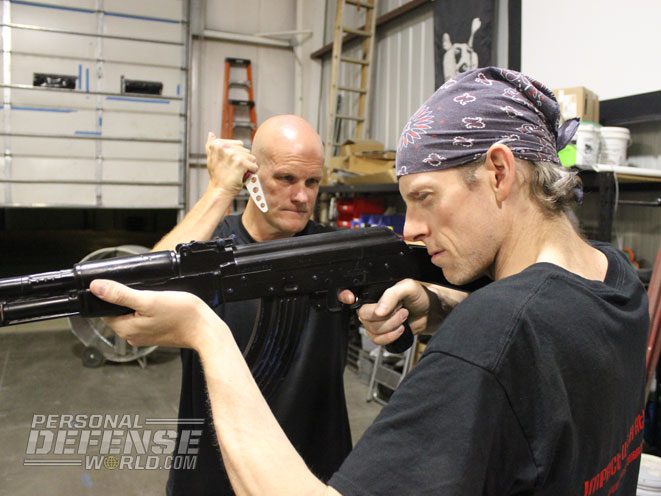 In most areas of the U.S., you can legally carry a folding knife with a 3- to 4-inch blade. Some cities (like Chicago and Boston) and U.S. federal buildings are more restrictive and only permit a 2.5-inch blade. For the sake of argument, let’s assume a worst-case scenario in which you are armed with only 2.5 inches of sharp steel blade. What can you realistically cut? Actually, probably more than you think. If you push on your arm or leg with your fingers, you’ll see that human flesh is compressible—it “gives” under pressure. Because of this elastic quality, with proper technique, a 2.5-inch blade can actually cut deeper than its length. Nevertheless, let’s keep it simple and assume that your knife can inflict a 2.5-inch-deep wound.

RELATED: Tips and Tactics for Neutralizing an Active Shooter

Based on this knowledge, the next step is to translate that destructive potential to the human body and determine which structures, if targeted, would force the shooter to immediately stop pulling the trigger. This is where anatomy comes in.

When taking down an active shooter with a knife, it is best if you can approach him from his trigger-finger side—for most people this is the right side. Approaching in this way not only gives you immediate access to the physical structures that pull the trigger, it also makes it extremely difficult for the shooter to orient his weapon toward you. This is particularly true if you can approach from the blind spot diagonally to his rear, rather than perpendicular to the bore of his weapon.

RELATED: Workplace Violence – Defend and Escape an Active Shooter at the Office

Before you make your approach, your knife should be out, open and gripped in your dominant hand in a “reverse-edge” grip. Specifically, you should grip your knife in a reverse-grip and the cutting edge facing back toward your wrist. Gripping the knife in this way allows you to stab with powerful downward and forehand motions and then use your back muscles to cut with a pulling motion. The result is a simple but devastatingly effective cutting motion.

In the most probable scenario, you and your attacker will both be right handed. For the sake of this illustration, let’s assume that he’s armed with a shoulder weapon like a rifle or shotgun. If we consider the bore of his weapon to be pointed at the 12 o’clock position, you should approach him from roughly the 5 o’clock position. Make the best use of cover and concealment to hide yourself from view until you’re ready to move. When the opportunity presents itself, move quickly forward with your knife chambered near your right shoulder and your left hand, palm forward, in the lead. This allows you to use your left hand to index, deflect and control his weapon and ideally prevent him from pointing it at you or any other innocent parties.

When you are within range, drive your left hand into the stock of the weapon so it strikes the attacker’s jaw to stun him. If he does not have a true cheekweld or is firing from an underarm position, you can use your left hand to strike his exposed head or simply skip the initial strike.

With a downward arcing motion of your right hand, hammer down on the shooter’s right wrist with the little-finger side of your wrist. This will put the knife blade between his wrist and the weapon. As you follow through on your strike, use your back muscles to pull forcefully back toward you as you push the stock of the gun away with your left hand. This opposing push-pull action will cut the structures of his inner forearm to the bone and rip his hand off the weapon—instantly destroying his ability to squeeze the trigger.

RELATED: How to Survive a School Shooting

Now that his right hand is off the gun, step forward and rechamber your knife hand to repeat the process with his left arm. Reach over the barrel of the gun so the muzzle points safely under your armpit and once again hammer, rip and shear his left hand off the forend of the weapon. As he loses his grip, maintain control of the weapon with the grip of your left hand. Although you have technically eliminated the lethal threat at this point, taking the shooter completely out of the fight is still highly recommended. A quick and decisive way to do this is to thrust the knife into one of his eyes, destroying his vision and making it impossible for him to renew his attack. If the shooter’s weapon is slung, use the same pull-cut motion to sever the sling and take control of his weapon.

With the shooter neutralized, step back to create distance and monitor his actions to prevent him from accessing other weapons. If you did your job well, this will be impossible because both of his hands will be crippled.

Taking down an active shooter requires great determination and extreme violence of action. If you’ve got the will—and a sharp knife—you’ve now got the way.

BLADE Show 2022: Inside the Coolest Knife Show in the United States

Channel Your Inner Transformer with the CRKT Provoke Compact