"…the PPK and PPK/S have always been among my favorite carry guns…they remain a standard by which I judge many of today’s subcompacts. "

The Walther PPK is deeply rooted in firearms history. It is as iconic as Colt’s Model 1911, the Winchester Model 1873 lever-action rifle and Smith & Wesson’s .44 Mag Model 29. And, like all of the aforementioned, it is still being manufactured. The PPK has been going strong for more than 80 years! Along with later versions, the Walther PPK and PPK/S remain in use to this day, old and new alike, something that can only be said for a handful of firearms developed in the early 20th century.

Walther received international acclaim following the first appearance of the PP model in 1929 and the PPK about a year later. Both were originally chambered in 7.65mm (.32 ACP), and then 9×17, or 9mm kurz (“short” in German). Also known as the 9mm Browning Court or .380 ACP, the cartridge was actually invented in America by John Moses Browning and first used in the Colt Model 1908.

The PP and PPK brought Walther to the attention of governments and law enforcement agencies the world over, which found both models ideal for service and police use as either primary or backup sidearms. Their popularity among civilians on both sides of the Atlantic also remained a constant from the pre-World War II era into the post-war 1950s, and eventually through the writings of a former British Naval Intelligence officer named Ian Fleming, who made the Walther PPK the most famous handgun in literature.

Walthers have always been top choices for self-defense. Weighing only 23 ounces unloaded, the compact semi-autos have either a 3.9-inch barrel (PP) or 3.3-inch barrel (PPK, PPK/S) and a seven-round magazine capacity in .380; one more in .32 ACP for the PP and PPK/S, and one less in the more compact PPK variation. The popular .22 LR chambering was added to the Walther line back in the 1930s along with the .25 ACP, another popular caliber linked to John Moses Browning and Fabrique Nationale (FN). During Walther’s post-WWII era, the .22-caliber PPK became something of a classic, and by the 1960s, when handsomely cased examples were available, the .22 LR had yet another renaissance. 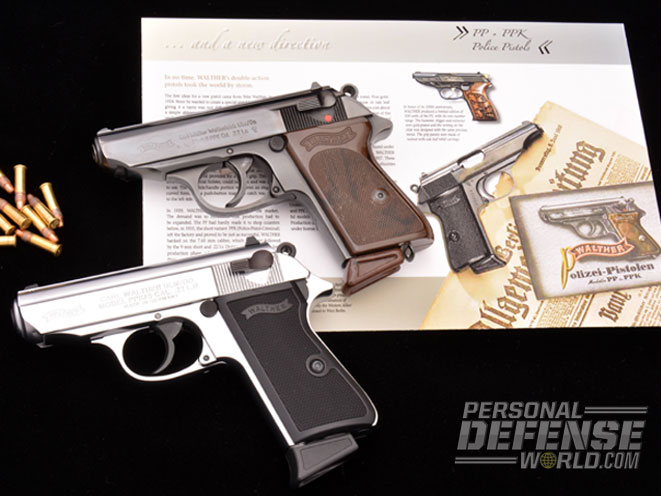 Walther’s original .22 pistols were manufactured up until 1945, but the war years curtailed their production because .32 and .380 ACP models were issued to German military officers as sidearms. (There is an entire class of collectors specializing in WWII-era Walther PPK pistols that have specific proof marks showing they were issued to German police, political officials and others during the war. Most were chambered in .32 ACP.) Additionally, due to the gun’s decade-long production prior to WWII, the PP and PPK were equally popular with the French Resistance and others who found the compact Walthers provided adequate firepower and easy concealment.

After the war, Walther had to rebuild itself, and by 1950 was on the way to getting back into worldwide production, with the PP and PPK topping the list in .32 ACP, .380 ACP and .22 LR chamberings. Featuring a fixed barrel and a low bore axis, the guns used a simple blowback action and innovative (for a semi-auto in 1930) double-action/single-action (DA/SA) trigger design.

The now-popular PPK/S model was added in the late 1960s to circumvent the Gun Control Act of 1968, which denied importation of the PPK into the U.S. based on its failure to meet certain requirements of length, weight and other “sporting” features, despite the fact that it was chambered for the .22 LR and smaller pistols were already being manufactured in the U.S. Walther addressed this by combining the frame of the PP model with the shorter PPK barrel and slide to create a semi-auto that weighed slightly more than the PPK and was just a fraction larger. The changes between the PPK and PPK/S were sufficient to provide the necessary import points. In the end, it was truly an exercise in futility, since U.S. law allowed domestic production (as opposed to importation) of the PPK, and manufacture began under license in the U.S. a decade later through Interarms in Alexandria, Virginia. These models (PPK and PPK/S) were stamped “Under License of Carl Walther Waffenfabrik Ulm/Do” on the left side of the slide and “Interarms Alexandria, Virginia” on the right.

In 1998, Walther USA was established in Springfield, Massachusetts, for the importation and sales of German-made models, and in 2002 sales and importation were assumed in the U.S. by Smith & Wesson. Although Walther has once again established itself as an independent sales and marketing company in the U.S., with headquarters in historic Fort Smith, Arkansas, in order to remain in compliance with the draconian Gun Control Act of 1968, the PPK will still be produced by Smith & Wesson for the U.S. market while Walther will produce the rest of its product line in Germany.

In addition to the famous PPK/S legend, the newest .22 LR models bear both the “Carl Walther Ulm/Do” and “Made in Germany” stampings on the left side of the slide and “Walther Arms Fort Smith, AR” on the right. In most respects, the latest PPK/S models, regardless of chambering, are no different from those manufactured in the past by Carl Walther, and the new .22 LRs look, feel and handle pretty much the same as any from the 20th century. Like the current .380 ACP design, the rimfire PPK/S features an extended beavertail that has been hailed by former PPK owners as a welcomed addition, both for avoiding cuts on the shooting hand from the back edge of the slide (if you grip the gun too high) and making recoil more manageable. The rimfire version is available in two finishes, matte black and a very bright satin nickel.

Compared to my 1960s-era .22 LR PPK, which has a shorter but wider grip frame than the PPK/S, the new model stacks up nicely and looks similar overall. One of the more noticeable differences, aside from the beautiful, old, high-polish blued finish and elegant brown plastic grips, is a different barrel and extractor design. But when you start comparing features, the two guns, though nearly half a century apart, have much more in common—from the traditional wavy grooves on the slide’s topstrap, to the 22 deep serrations in the rear of the slide, the round, knurled hammer (the new model lacks some of the fine detail), the checkered magazine release and the safety/decocker mechanism.

The new PPK/S’ sights are a notable improvement. A single Allen-head screw that can be loosened for windage adjustments locks the dovetailed rear sight. The front sight is vertically pinned and can be replaced with one of two extra sights included with the gun, along with the necessary tools, allowing a user to really fine tune the PPK/S for accuracy.

Though larger than the PP model, the PPK/S remains a comparatively compact pistol, just a little leggy in the grips for some concealed-carry users, if one were to carry a .22 LR. The point of building a new .22-caliber PPK/S (especially for Walther) parallels the current trend to manufacture exact duplicates of larger-caliber guns, allowing users to become completely familiarized with the firearm’s handling and operations at a significantly reduced ammunition cost. Everything else remains the same, only the recoil has been changed to protect your pocketbook. A .22 is also an excellent option for those who have difficulty handling more powerful handguns but still want a pistol for home protection, or just a .22 for target shooting and plinking. The PPK/S is more than adequate for these tasks.

The only issue with the gun, past and present, is the DA trigger pull, which, by Walther standards, has always been very heavy. My 47-year-old PPK .22 has an average trigger pull of 14.5 pounds, which is still 3 pounds lighter than the DA pull on the new PPK/S .22, which offers 17 pounds of resistance to cock the hammer and get the first shot going downrange. There are strategies, though, for shooting the PPK/S. If you have just chambered a round, the guns fires SA. If the gun is put into “safe” condition with a chambered round, it is automatically decocked and the firing-pin block engaged. This is accomplished by pulling the safety lever downward, which will lower the hammer and leave the trigger locked in its rearmost position. This allows two options when the safety is taken off and the trigger is released: fire the first round in DA mode, as most will do, or thumb-cock the hammer and fire in SA, at which point the trigger pull becomes a very reassuring 4.8 pounds, on average. After the first round, the gun only fires in SA mode until it is either empty or put into the “safe” condition. Firing a PPK/S in DA mode, then, is purely a matter of choice or circumstance.

There are many ways to carry the PPK/S, including belt holsters like Safariland’s Bianchi Model 5 Black Widow, which provides excellent retention with a thumb-break safety strap. For pocket carry there is the latest Recluse contoured pocket holster, which allows for almost full concealment of the gun and easy retrieval from a trouser pocket. Or, my personal favorite, a copy of the two-tone blue and beige suede shoulder holster worn by Sean Connery in the early James Bond films. It is not only a bit nostalgic, but very comfortable to wear because it is entirely made of suede. I tried all three methods with the PPK/S .22, and the gun was effortless to carry and very easy to get into action. All of these holsters, including the Bond rig, are readily available.

The SA trigger pull averaged 4.8 pounds with a modest 0.38 inches of take-up and a very quick reset. The slide is extremely easy to operate when chambering the first round or clearing the gun, and, like all PPK/S models, the .22 will fire a chambered round with the magazine removed. Weighing 1.5 pounds, the PPK/S .22 has the same natural balance in the hand as the .380 version, which makes this an ideal practice gun. With its fixed barrel and low bore axis, the PPK/S .22 is an inherently accurate pistol.

To test the pistol’s accuracy, I fired three popular .22 LR ammo brands—Winchester’s Super-X, Remington’s brass-plated hollow points (HPs) and Federal’s AutoMatch—at 7 yards. The rounds cleared the chronograph’s traps at an average of 899 fps, 880 fps and 925 fps, respectively, from the Walther’s 3.3-inch barrel. The most accurate was the Remington ammo, placing five shot into 0.75 inches, followed by Federal with a 1-inch group and Winchester with a 1.75-inch group. The PPK/S .22 isn’t a target pistol, but when a gun can place five rounds into an inch, even when you’re as close as 7 yards, there’s nothing much to complain about. 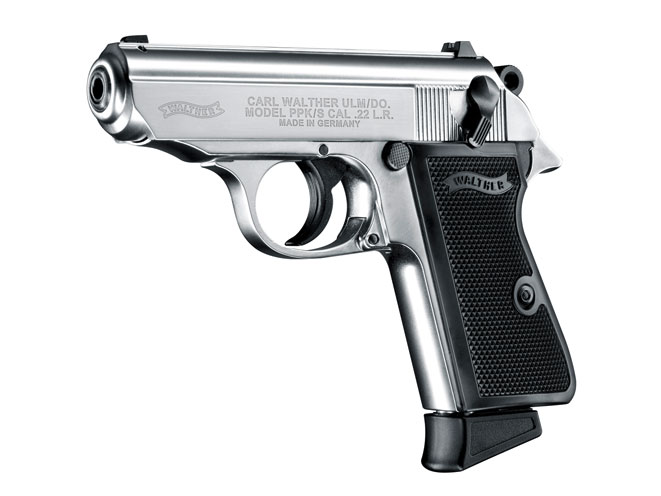 Personally, the PPK and PPK/S have always been among my favorite carry guns and among my preferred models for a small sidearm that can be carried decocked with a chambered round and easily brought into action by either re-cocking the hammer or firing in DA; they remain a standard by which I judge many of today’s subcompacts. Having this same capability in a .22 LR makes the new PPK/S a first choice in my book.

While striker-fired pistols are more popular than ever, and offer numerous advantages, there is still something to be said for tried-and-true technology, especially when it comes from a design that has managed to remain popular since Calvin Coolidge was in the White House!