by Robert A. Sadowski
in Guns, Handguns
0

Wilson Combat’s Sentinel pistols are very well-built, compact 1911s chambered in calibers that are easy to control in smaller pistols.

The saying “You get what you pay for” is apt when talking about the Wilson Combat 1911 Sentinel.

It is not an inexpensive compact pistol. What you pay for is eye-pleasing aesthetics combined with ultra reliability and inherent accuracy. Of the four Sentinel models, three are built in 9mm, with the Super Sentinel chambered for .38 Super. “The reason we built Sentinels in only 9mm or .38 Super is because of the cycle time,” Ryan Wilson, vice president of Wilson Combat, explained. “In 9mm or .38 Super, pistols work 100 percent. When you make a compact 1911 and chamber it in .45 ACP, the slide moves too fast for the magazine to keep up and feed the rounds. It is difficult to get the pistol to work with 100-percent reliability.”

The Sentinel is tight, without a hint of wiggle between slide and frame. “All our pistols are hand fitted, there’s nothing drop-in about our guns,” Wilson added. “All our parts are machined slightly oversized so everything is hand fitted with a file and polishing stone to that particular gun. We have about 50 gunsmiths in-house, some of which have been with us for 30 years.”

The edges of the Sentinel are smoothed so there will be no fear of the gun snagging on clothing when needed quickly. I carried the Sentinel concealed for weeks and found it was fast from the holster during drills. The thumb safety is Wilson Combat’s Bullet Proof style that affords plenty of leverage yet is small and low profile. The Bullet Proof high-ride beavertail grip safety allows a shooter to grip the pistol higher and closer to the bore axis for less muzzle flip and more control. The frame has 30-lpi, high-cut checkering on the frontstrap and on the abbreviated mainspring housing. The Sentinel doesn’t move much even during fast double-taps. The magazine well is contoured to more quickly accept a reload. The three-hole trigger is long and finely serrated on the surface for good finger adhesion.

Grasping and retracting the slide is effortless with the angled slide serrations. You can really appreciate the hand fitting the pistol received when you work the slide. The top of the slide is domed and forward carry cuts at the muzzle taper the pistol’s forward end and give it a distinct look. The Battlesight front sight is dovetailed into the slide and sports a green fiber optic that soaks up any available light so it is bright and quick on target. The Battlesight rear sight has horizontal grooves cut into the rear of the sight to eliminate glare and is shaped like an uppercase “U.” Loosen two hex screws and the rear sight can be adjusted for windage. 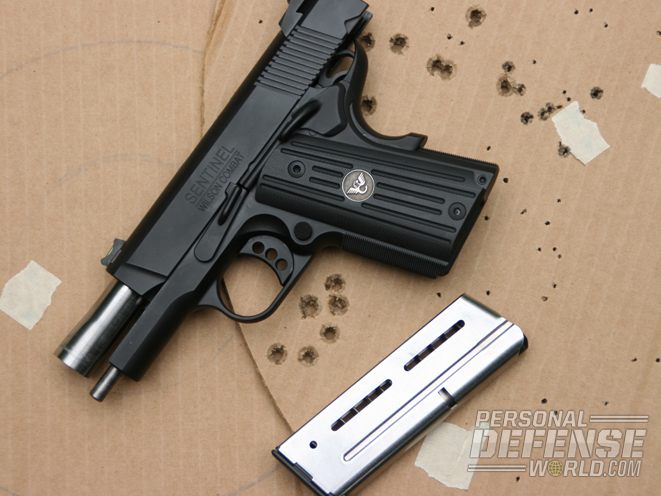 At the range, the Sentinel met my high expectations. I ran factory full metal jacket (FMJ) and hollow points (HP) along with some reloads. Factory ammo consisted of Hornady Steel Match and +P Critical Duty rounds. Both use HP bullets. For FMJ ammo, I ran new Black Hills 115-grain rounds. The Sentinel chewed through it all. For such a small pistol, I was surprised how easy it was to shoot accurately, but I shouldn’t have been surprised. The trigger broke at a clean and crisp 3.5 pounds. Recoil was reduced in the +P rounds due to the steel frame. It is a small pistol that you will want to train with; you will want to shoot it. I was able to shoot two- and three-round clusters that shared the same elongated hole. The Battlesight’s deep “U” combined with the fiber-optic front sight for fast target acquisition.

The Sentinel is only one of the four Sentinel models produced. All are quite similar, but each is also unique. The Ultralight Carry Sentinel is the lightest of the four Sentinel models. It has an aluminum frame, a steel slide and weighs only 25.2 ounces (empty). It has all the same features as the Sentinel model (except the steel frame) including the 3.6-inch, match-grade, stainless steel barrel. The barrel and chamber are fluted, which reduces weight a smidge but really increases the cool factor of the pistol. The Bullet Proof high-ride beavertail and thumb safety are standard equipment. The differences include a round-butt frame—for added concealability—G10 Starburst grips, 30-lpi slide top serrations and carry cuts, and ball endmill cuts that enhance aesthetics. Ball endmill cuts in the slide are similar to what original 1911s wore back in the day, a nod by Wilson Combat to the 1911’s heritage. Frame details include a counter-sunk slide stop hole. The slide also has 40-lpi serrations on top and a heavy chamfer on the bottom edge.

The Ms. Sentinel was designed for female shooters or shooters with smaller hands. It uses a trigger with a medium-length pad so shorter fingers can better connect with the trigger. The trigger is set 3.5 to 3.75 pounds. Like the Ultralight Sentinel, the Ms. Sentinel uses an aluminum frame mated to a carbon steel slide. It has the round-butt frame for less printing when carried concealed. The bottom of the slide has a heavy chamfer. This small detail protects the thumb of the non-shooting hand when using a high grip. The Ms. Sentinel is the only pistol in the line to come with cocobolo wood grips with the Wilson Combat Starburst trademark texture pattern. Perfect for someone with small hands, the Ms. Sentinel is also light, being only 1.6 ounces heavier than the Ultralight at 26.8 ounces.

The Super Sentinel is chambered in .38 Super, hence the name. The .38 Super cartridge is well known and often used in the competitive shooting community. The .38 Super cartridge can achieve .357 Magnum power and exceed +P+ 9mm performance. An aluminum frame and carbon steel slide are at the heart of the Super Sentinel. It has a medium-length trigger, G10 Starburst grips, and Battlesight front and rear sights.