by Will Dabbs MD
in Gear, Less Lethal
0

The Kimber PepperBlaster II looks a bit like a big plastic derringer.

Gunshot wounds are seldom like the movies. It is seldom quick and never tidy.

The grievous wounds and death implicit within a violent exchange of gunfire are simply unavoidable byproducts of its purpose. Defensive firearms are little more than desperate, last-ditch efforts at altering offensive behavior. If technology could provide us with the means to change hostile behavior without the resulting blood and tears intrinsic to an exchange of bullets, we would all be better off. Kimber now provides us with the next best thing.

The name Kimber is well known to anyone who has ever squeezed a trigger. The company’s 1911 platforms are carried by elite armed professionals across the country, and its tricked-out handguns win competitions and defend home and hearth from sea to shining sea. Its precision long guns are renowned for their accuracy. While their professional reputation is built upon Real Steel combat firearms, they also offer a line of less-lethal defensive products that are as well-designed and superbly executed as their more deadly brethren.

At its heart, the PepperBlaster II is a high-tech, Swiss-made, polymer pseudo-derringer that incorporates a pair of pre-charged cylinders of 10 percent oleoresin capsicum, the intensely irritating ingredient found in cayenne peppers at approximately 2.4 percent capsaicinoids. After a little research just trust me—you don’t want any of that stuff on you.

Each cylinder is driven by a pyrotechnic charge so there are no pressurized containers to lose their efficacy over time. The trigger is a manual double-action that fires one cylinder with the first press and then automatically cycles to the second with another stroke. Trigger pull is about 6.6 pounds.

Each blast is effective out to 13 feet and produces a pattern at that range of about 18 inches. The irritant agent discharges from the device at around 112 miles per hour, or about 165 feet per second. The effective operating temperature is between -4 degrees and 140 degrees Fahrenheit. While not waterproof, the device is water resistant.

The ergonomics of the Kimber device are as well-reasoned as are those of the company’s firearms. The original PepperBlaster is a rectangular module that bears no similarity to a firearm. When affixed via a belt clip the device looks more like a cell phone or insulin pump than a weapon. The PepperBlaster II incorporates a modest pistol grip and a set of rudimentary sights, and it strikes a slightly more sinister pose on your belt.

Both devices incorporate a swing-away safety device to prevent accidental firing. To discharge the device, the user’s finger slips into the triggerguard from either side and pushes the safety aside in a natural fashion requiring no conscious thought. However, the safety device does a splendid job of preventing an accidental discharge when dropped into a pocket or a cluttered purse. 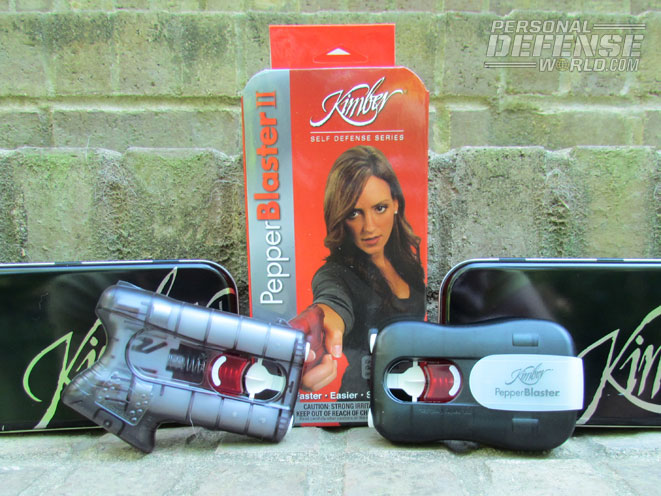 There are still lots of places where it is illegal to carry a firearm. It is also almost universally required that a concealed carry holder must be 21 years old. For those college students not yet of age, or anyone who lives in parts of the country not yet allowing reasonable concealed carry, the Kimber PepperBlaster II is a splendid alternative to the risks, liabilities and training requirements that come with owning and operating a firearm.

The irritant used in the PepperBlaster II is more potent than military CS and CN gas formulations, and I can attest via experience that CS gas will take the wind out of your sails in a hurry. A blast to the face with the PepperBlaster II will result in near-instant incapacitation, blindness, coughing and pain that will gradually resolve over the course of 30 to 45 minutes with no residual ill effects. Ideally, this should provide more than enough opportunity for the potential victim of a violent crime to seek assistance or escape. All this is available in a package that is compact, attractive, easily concealed and readily used with a minimum of training. Additionally, the PepperBlaster costs only a fraction of what even the cheapest defensive firearm might.

I have carried a gun for nearly three decades and I was legitimately taken with the PepperBlaster II. I picked up enough to equip my wife, my daughter and my car. Check local laws for legality in your particular area, but for certain defensive applications against predators, the Kimber PepperBlaster II is a great alternative to a firearm that carries substantially less legal and moral baggage.