A Look at the Custom Galloway Ruger LCP .380

The Ruger LCP has been one of the true success stories in contemporary small-caliber self-defense firearms. At only 9.4 ounces, the LCP uses a composite frame (high-performance glass-filled nylon), an aluminum subframe grip frame and a through-hardened steel slide with a 2.75-inch steel barrel. It will fit into the palm of most people’s hands, and with a 6+1 capacity offers an easily carried and concealable double-action-only (DAO) sidearm for personal protection. 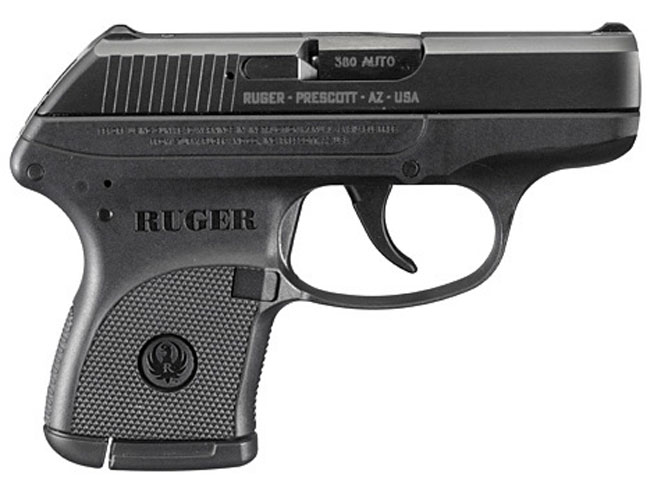 There are no manual safeties and the trigger is DAO with a short 0.5 inches of travel and a substantial 6-pound trigger pull. In terms of familiarization, the flush-profile hammer is recessed in the back of the slide and can only be seen in the ready-to-fire, semi-cocked position (the action has been cycled). If the gun has not been cycled, the hammer is not visible at the back of the slide, and there is a loaded-chamber view port at the breech showing the rim of a chambered .380 ACP cartridge.

The LCP’s finish is a smooth, clean matte blue-black with a fixed, crescent-cut rear sight and a small, graduated, integral front sight.

The grip contour easily places the mass of the frame within the web of an average-size hand, the thumb falling into a groove in either the left or right side of the frame, making the general grasp ambidextrous, although the magazine release is on the left side only. The LCP feels solid in the hand with the second and third fingers firmly wrapped around the checkered and serrated grips and frontstrap. The backstrap is also checkered and serrated for a more secure rest in the palm.

The Ruger LCP is one of the best options today for a concealed-carry semi-auto. However, as a price-driven competitor in the marketplace (with a suggested retail of $379 and usually selling for $319 to $349), the LCP has never been as finely tuned as many of its more expensive contemporaries costing hundreds more. 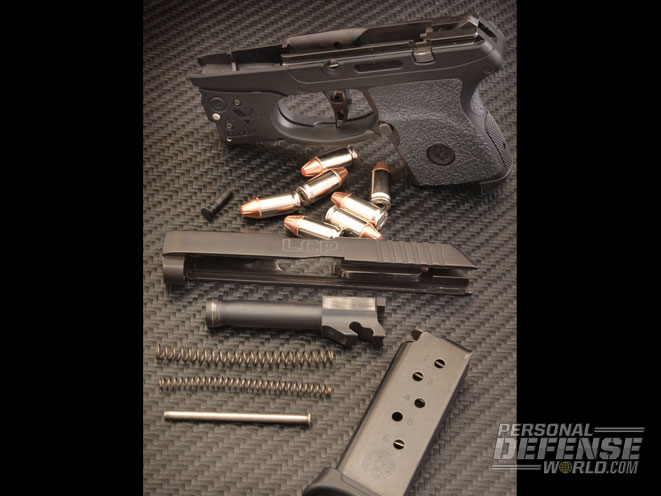 Eric Galloway explained that mass-produced firearms can all use a little “niche gunsmithing” to make them run smoother and more reliably.

“When we get an LCP in house, the first thing we do is strip it all down, clean it and begin by de-burring all the edges of the action, and inspecting and lightly polishing any rough edges around the loading ramp. Rough edges on stamped parts are often simply part of machining and they do not impede the operation of the gun. Polishing does, however, improve the operation. We also make sure there are no (dowel) pins sticking out on retainers, which can happen and cause hammer drag or trigger drag.”

Internal upgrades for a Galloway-modified LCP include a skeletonized trigger adjustable for pre-travel and overtravel, a new hammer spring, a steel guide rod and a 13-pound recoil spring. While all of the standard parts in an LCP are very good, the Galloway improvements make the trigger action smoother, recoil a little more manageable (though it requires a bit more effort to cycle the slide when chambering the first round or clearing the gun), speed up the cycling of the pistol and overall improve handling by smoothing out the entire operation of the Ruger LCP pocket pistol.

Part of the standard Galloway upgrades is a new recoil spring and stainless steel guide rod. The new guide rod is more durable, as is the heavier 13-pound dual recoil spring made to Galloway’s specifications. The Galloway guide rod has a 30-degree bevel machined into it, which is then hand polished to create a smooth radius across the back of the head that firmly seats the guide rod into the barrel’s camming lug notch. The heavy-duty spring also has a longer service life and eases some of the muzzle flip that the standard recoil spring permits. 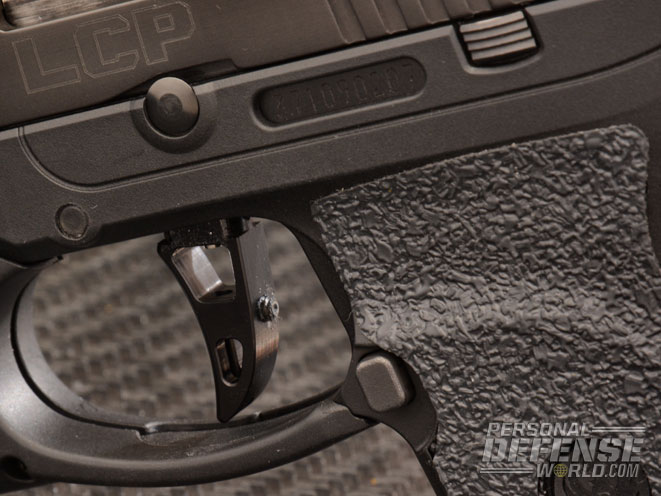 “The standard LCP has a fairly light (9-pound average) recoil spring,” explained Galloway, “and since all of the mass of the LCP is in the slide, you get no help in mitigating recoil from the frame. The increased spring rate helps to balance it out.”

Looking at the standard LCP trigger and the Galloway skeleton trigger, there is absolutely no similarity. Average trigger pull with an LCP is 5.5 to 6 pounds, which is not excessive but there is considerable stacking and the angle of the trigger makes the pull feel longer than it actually is. Still, a standard LCP trigger is pretty snappy and easy to engage. While the LCP’s internal trigger pivot cannot be changed, the new skeletonized, aluminum alloy, black-anodized Galloway trigger creates a change in trigger dynamics.

“The reason,” said Galloway, “is to increase leverage on the trigger and reduce the bite during recoil from the pointy recurve at the bottom of the standard trigger. By almost flattening out the trigger, we change the trigger finger interface so you get more leverage.”

This does not noticeably change the weight of the trigger pull just the way it feels. In general, the trigger feels lighter, stacking becomes less evident and reset is quicker. The Galloway trigger comes adjusted for pre-travel and overtravel settings with Allen-head screws. These can be individually reset to owner preference. 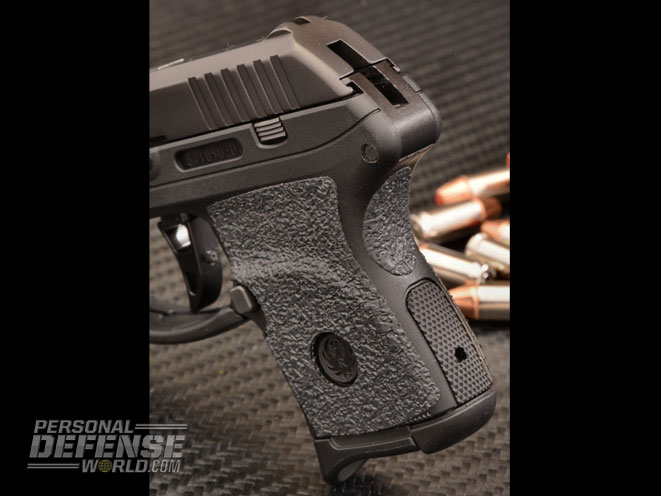 One of the options offered by Galloway is TractionGrips’ rubberized panel inserts for the grips and curve of the backstrap. Custom molded to fit the LCP, they are bonded to the glass-filled nylon grip frame and provide a more tactile surface for securely holding the little .380. The insert added to the backstrap recurve also helps keep the Ruger LCP better stabilized in the web of the user’s hand during recoil.

“The textured rubber finish was originally designed to be used on tools,” explained Galloway, “to provide extra traction. We have it made by TractionGrips to fit the LCP. The surface texture increases grip retention. It will not react to perspiration or oils from your hands. In fact, only solvents can harm the surface, so you need to be careful when cleaning the gun not to get any solvent on the grips.”

For the sample gun shown, the 2013 LCP was given the full Galloway treatment, including increasing the standard magazine capacity from six rounds to seven without altering its exterior dimensions. The MagGuts alteration includes a new steel follower and a dual-range spring system to allow an additional round to be loaded. The original floorplate is retained (either flush or with finger extension).

“The alteration does not add any extra weight or extra bulk,” said Galloway, “just an extra round.”

At 7 yards, using a Weaver stance and a two-handed hold, the improved Galloway LCP was surprisingly accurate and quick to get back on target. Recoil was still brisk with high-performance personal defense loads, but less than before the Galloway upgrades. The real key to improving the LCP, however, is the trigger and the ease with which the gun can be fired. Trigger pull is still heavy, and necessary since this is the only manual safeguard the gun has and a light trigger pull would be more of a detriment than an asset. A trigger that is easier to operate and provides a smoother discharge is a definite plus here. The modified seven-round magazine also experienced zero issues with feeding during the test.

Average trigger pull with the new Galloway trigger was 5.75 pounds with effort notably reduced from that of the standard trigger. The heavier recoil spring also induced a slight reduction in recoil with heavy tactical rounds. This proved helpful with quicker recovery and accuracy using the Viridian Reactor 5 green laser. Average groups with Hornady Critical Defense 90-grain FTX was a consistent 1.5 to 1.75 inches at point of aim (POA). Just using the pistol’s open sights, groups averaged 2 to 2.25 inches, with quick trigger reset and target acquisition.

Overall, the gun was easier to handle and every Galloway upgrade delivered exactly what was promised. At a combat distance of 7 yards, the custom LCP can put all its charges into the center body mass of a Speed-well B-27 target, with most in the 10 and X, and adding $149 to the original cost of the LCP is more than offset by the enhanced performance. Even at around $520 (retail cost of an LCP and Galloway upgrades), it is a smaller investment than a higher end .380 that may still suffer from many of the same issues as a standard out-of-the-box LCP. If you have the Ruger LCP and like it but wish it was just a little bit better, then wish no more.