by Massad Ayoob
in Guns
0

“The important thing is reliability, and like .38 LCRs I’ve tested in the past, the 9mm LCR was 100-percent reliable.”

Ruger’s LCR (Light Compact Revolver) made big news when it was introduced a few years ago because it was the first polymer-framed wheelgun. However, it made big sales because shooters loved its light, smooth trigger pull and enhanced “shootability.” Other calibers followed the original .38 Special: .357 Magnum, .22 LR and .22 Magnum. And now Ruger is offering the LCR in 9mm.

Revolvers for the rimless 9x19mm round go back to Smith & Wesson prototypes in the mid-20th century, and both Ruger and S&W actually produced them decades later. Moon clips facilitated this chambering for Ruger’s Service Six and SP101 five-shooter and for S&W’s J-Frame Model 940, while a special extractor design served the S&W K-Frame Model 547. A hopeful Federal Cartridge put a rim on its popular 9BP 115-grain jacketed-hollow-point 9mm offering and called it the “9mm Federal” in hopes of serving this market. Alas, none of those four guns, nor the 9mm Federal cartridge, survived long in their respective catalogs. More recently, economy-priced 9mm revolvers have failed to light up the sales charts in the 21st century.

But, perhaps because of surging interest in 9mm autopistols among police and armed citizens alike, some in the industry obviously feel that it’s time to take another crack at the 9mm revolver concept. S&W has recently offered an eight-shot N-Frame and a seven-shot L-Frame designed for moon-clipped 9mm rounds. And, of course, we have the topic of this article, the latest LCR, chambered for the same cartridge.

The newest LCR retains the buttery-smooth trigger pull that has made the LCR the bestselling small-frame revolver in many gun shops. This was a pleasant surprise. Historically, double-action revolvers chambered for autopistol cartridges have required heavier trigger pulls because the springy moon clips create headspace issues and reliable primer ignition requires a harder firing pin hit from a stronger mainspring. My test 9mm LCR’s trigger pull had an average pull weight of 9.26 pounds. That’s actually a little lighter than the pull weight on my well-used, first-year-production LCR .38 Special, and it’s distinctly lighter than the pull weight on my LCR .22. (The .22s need a hard mainspring hit because of the variations in rim thickness on rimfire cartridges.) Thanks to the smoothness built into the unique double-action-only (DAO) mechanism of the LCR, the trigger pull feels lighter than it actually weighs.

That happy surprise was joined by more. Those of us with auto-caliber revolvers—mostly in .45 ACP—have noted that standard full-moon clips in that caliber are more of a chore than a joy in terms of charging live rounds and removing spent casings. LCR moon clips have slits between each cartridge slot that make snapping in live rounds and plucking out empties much easier than that. I used a D-Jammer to make it easier still, and a Bic Stik pen can do the same. And, of course, a moon clip is the fastest way to reload an LCR, a huge benefit if you need more than five shots.

The big surprise? Over the years, the high-intensity 9mm cartridge has been more “snappy” in its recoil than the .38 Special loads we are accustomed to in similarly sized guns, though they were much more comfortable to shoot than .357 Mags in the same packages. But that wasn’t the case with the LCR 9mm.

At the range, we tried hot load versus hot load (Federal +P+ 9BPLE for the 9mm and Remington 158-grain, lead, semi-wadcutter, hollow-point, +P “FBI Loads” in the .38 Special) and standard-pressure versus standard-pressure (Winchester 147-grain subsonic FMJs in the 9mm and Winchester 158-grain, round-nose, lead rounds in the .38). My five-foot-tall girlfriend, who owns a Ruger SP101 9mm that she doesn’t like because she thinks it kicks too much, shot the two LCRs side by side with each set of comparison loads and exclaimed, “Am I going nuts or does the 9mm kick less than the .38? You try it.”

I did, and I have to agree. The hot loads kicked less in the 9mm LCR than in the .38 Special LCR, and the same was true for the light loads. In the light load comparison in particular, it’s counterintuitive: The 147-grain 9mm is only 11 grains lighter in bullet weight than the .38 we were using, but it is going dramatically faster. I can only say, “Go figure, and be happy when counterintuitive results make something easier to shoot.” Of course, the fact that the .38 Special LCR is roughly 5 ounces lighter than the 9mm version may also have something to do with that.

It has come into vogue to test short-barrel guns at short distances. I apparently missed the memo that changed the rules of engagement and said that bad guys had to cut some slack to the good guys and get closer to them and become easier targets if the good guys were using harder-to-shoot guns. I have a feeling the bad guys didn’t get that memo, either, so I still test short-barreled guns from the standard “service pistol” distance of 25 yards using a Caldwell Matrix rest on a concrete bench.

The target was an IPSC silhouette turned backwards, its white backing facing the shooter, with a little bullet paster for the aiming point. The 9mm LCR is the first of its kind I’ve seen with a white insert on the front sight, which rendered a sight picture resembling two narrow black vertical fork tines where the front sight should be. Nonetheless, 25-yard groups averaged in the 4-inch range for five shots.

Shooting from a bench, there’s always room for unnoticed shooter error, particularly with a short sight radius. That’s why I always take two measurements of each group, one of all five (testing what the shooter can hope to do with it from a solid support position absent any great stress) and another measurement of the tightest three hits. I confirmed long ago that this second measurement takes enough human error out of the equation to roughly equal what the same gun and load would do at the same distance from a machine rest, a device not readily available to most readers, and therefore something they can verify on their own with their own gun.

You’re going to lose a good bit of velocity from a short barrel, so a load that starts out fast makes sense for self-defense. The Federal 9BPLE load has a legendary record as a “man-stopper” with a 115-grain, jacketed bullet going 1,300 fps out of a service pistol. From the short-barreled Ruger revolver, it put five hits into a group that measured 1.45 inches high by 4 inches across, with the best three grouping into 1.55 inches.

For most of the 20th century, the 124-grain bullet was the heaviest available in 9mm, and today it is considered a “medium weight.” It was represented in this test by Sig Sauer’s new ammo brand with the “V-Crown” JHP bullet. Again the group spread more horizontally than vertically, with the farthest apart of the five shots from 25 yards measuring 5.25 inches, but the best three being 2.75 inches apart.

Heavier 147-grain subsonic 9mm ammo was developed for accuracy and has been in vogue since the late 1980s. Our representative cartridges were Winchester’s lead-free FMJs, some of the most accurate such rounds, and it gave the best accuracy of the test. The five-shot group at 25 yards was 2.9 inches, and the best three clustered into 1.85 inches. 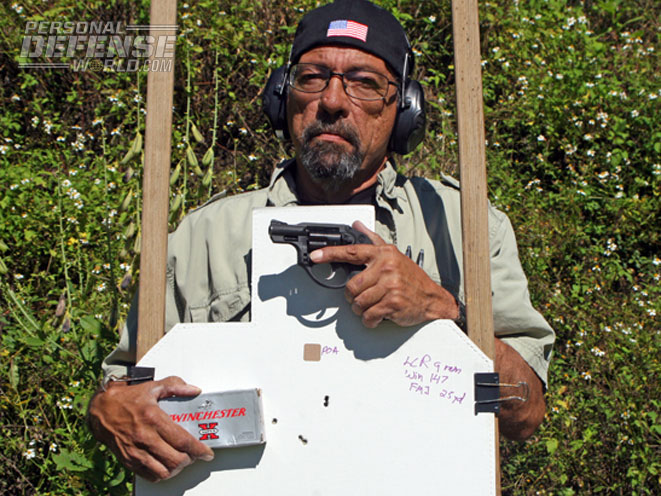 Accuracy has two components: how tightly the hits group and where the point of impact is relative to point of aim. Given that 4 inches at 25 yards is widely considered to be “acceptable accuracy” with a full-sized service pistol, this little pocket gun passed with flying colors. However, the point of aim/point of impact was off, with everything grouping low. The 115-grain +P+ ammo averaged a full 6 inches below the point of aim at 25 yards, and the 124-grain load was more like 7 inches low. The 147-grain subsonic often hits higher than its lighter, faster brethren and did so here, grouping approximately 3 inches below the point of aim at the same yardage. At 7 yards, the 147-grain Winchester ammunition went an inch or two low, clustering into less than an inch and a half.

I’m apparently not the only one to experience this, and I suspect that Ruger is on top of it by now and will have shorter front sights that bring the point of aim and point of impact closer together. If yours is like mine, it’s merely an irritant, not an insoluble problem: The front sight is pinned in, and a shorter replacement should be an easy fix. There’s always the option of filing down the front sight, too. 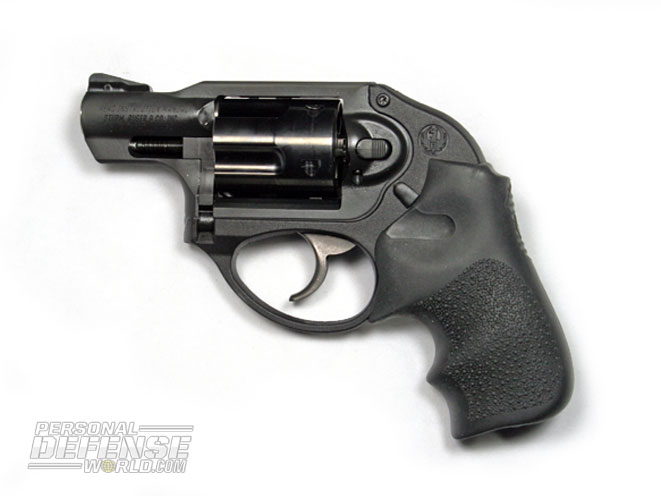 The important thing is reliability, and like .38 LCRs I’ve tested in the past, the 9mm LCR was 100-percent reliable. The moon clips give this five-shot revolver the fastest possible reload, though we always have to worry about whether the clips will get bent and jam the gun. That depends on how they’re carried, and it’s hard to find compact moon-clip carriers that keep them from getting bent the way they can in a pocket.

If you primarily carry a 9mm auto-pistol, strongly consider the LCR 9mm for backup duty. If your primary is gone and you’re down to the LCR, you can eject an empty moon clip and thumb 9mm rounds from your spare pistol magazine into the LCR’s cylinder and get another five shots. They won’t eject, though, without a moon clip holding the rimless cases together, so you’ll need a pen or something similar for ejection if you need more than 10 rounds with your LCR revolver.

A lightweight, snub-nose, 9mm pocket revolver makes great sense as a backup gun for someone who carries a 9mm semi-auto and at least one spare magazine. If you fit that profile, you definitely need to check out the new 9mm Ruger LCR.