Today more people are choosing rifles for home defense. Pioneers in the field like Clint Smith laid the groundwork for using rifles for “pistol distances,” something once considered impossible. This opened the door for using rifles for personal defense, and the industry has since been producing ammunition and systems to meet this need. Rifles are more accurate, easier to shoot and more intimidating than handguns. The argument against their effectiveness is no longer valid, but there remains one real problem: They’re loud.

When our tactical team made the move from pistol-caliber entry weapons to rifles, the noise and flash of the AR rifle quickly became evident, not so much on the range, but in the house. This was especially true with the shorter barrels. My early rifles with 7- to 10-inch barrels were a blast to use in the shoot house. Literally. Not only could you start a fire with the muzzle blast but, if your partner was anywhere near it, you could also take him or her right out of the fight.

Much of the flash issue has been taken care of with improved muzzle devices, but unfortunately many make the rifle louder. You need only talk to a special operations soldier who makes entry without ear protection about the effects—with years of experience accompanied by partial deafness, they get used to it. But as a homeowner, that first round down the tube can disorient you. Enter the real solution: the rifle suppressor.

The suppressor industry has made fantastic strides over the last 10 years. Suppressors used to be heavy, hard to use and a pain to clean, and they often made your rifle unreliable. Suppressors were just as likely to ruin your day as to save it, and this was especially true with shorter barrels. As a rule, the more the sound is suppressed, the more back-pressure is created, and that has all kinds of nasty effects on a rifle’s timing, especially on gas impingement systems. This spawned the creation of piston-driven systems, which corrected the issue.

Nearly every manufacturer is now making a suppressor with a low back-pressure design. Operators Suppressor Systems (OSS) makes one with essentially zero back-pressure. OSS suppressors reduce sound a bit less than average but are exponentially better than typical flash suppressors or muzzle brakes. Most importantly, they will work on your shorter barrels.

SureFire offers a line of “Mini” suppressors, one of which I used during a week of hard training at SureFire’s media event. The Mini was excellent. AAC offers the compact, fast-attach M4-2000 suppressor, and both SureFire’s and AAC’s designs incorporate easy attachment and removal using a brake or flash suppressor, and their suppressors’ light weights make the change in impact manageable without making the rifle hard to maneuver.

Once considered a novelty, many suppressors are now made from titanium—Mike’s Gun Sales & Service’s Jet Titanium suppressor has been in my inventory for over 10 years. For something quiet and reliable that works on a variety of rifles, Wilson Combat offers the Whisper suppressor, which I’ve used on .308 ARs and on rifles chambered in 6.8 SPC, 6.5 Creedmoor and .223 Rem.

There are several advantages to suppressing your rifle, especially when it’s used for home defense. The most obvious is noise reduction, but let’s get one thing clear: Nothing you have heard on television is real. Suppressors are not “silencers,” and some designed to work on short rifles are hardly ear safe. That said, suppressors are light years ahead of brakes or flash suppressors and reduce concussive effect, their most important advantage.

Rifles in .223 Rem have a noticeable blast (this is less about sound and more about the pressure wave), and muzzle brakes can make this worse. In a home or closed space, the blast is exponentially worse and can disorient some people immediately.

A good rifle suppressor all but eliminates this effect, allowing you to hear what is going on around you, focus on the threat, maintain accuracy and mitigate hearing loss. Most well-designed suppressors will also eliminate the majority of flash on the initial shot and even more on each subsequent shot.

Another advantage is recoil reduction, which allows for much better second-shot accuracy. With most non-magnum calibers, a suppressor will lessen felt recoil, and in some cases it can be pretty substantial. Even on a rifle with little recoil to begin with like a .223, it can be significant. While there is some indication the suppressor makes the rifle more accurate, in my experience it simply helps the shooter. By eliminating a significant amount of recoil and most of the concussion and flash, you become a better shooter. 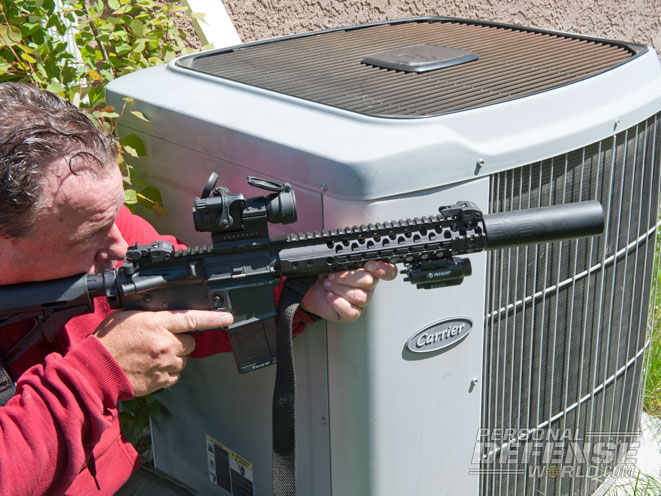 In order to determine just how this will affect you, shoot your rifle with and without the suppressor, using your self-defense ammunition. Suppressors also increase back-pressure, meaning much of the unexpended gas and powder that usually go out the muzzle go back into your action. Piston systems are better; gas impingement systems can be really bad. The shorter the barrel, the more this happens. Systems with really tight chambers may start to malfunction—I’ve seen a few rifles stop working after about 10 rounds, so it can be a real issue. Ensure that your weapon works with the suppressor, and clean it after every range session.

Because the suppressor speeds up the bolt carrier, the timing on a short-barreled rifle can be altered. Your perfectly functioning 10-inch rifle may become a platform for malfunction clearances when a suppressor is attached. This is the very reason why most piston systems are found on short guns. The suppressor may even come loose, and that can have an effect on your point of impact.

On a precision rifle at 100 yards, a quarter turn out can move your impact 6 inches. The same is true for carbine cans. A loose suppressor may be why your accuracy suddenly degrades, so regularly check that the suppressor is attached tightly to your rifle. But do so carefully—suppressors get hot. Titanium cans that dissipate heat quickly also heat up fast. Stainless cans let off heat more slowly and tend to transfer more heat to the barrel. If the suppressor’s hot enough, it may affect your point of aim. All that captured gas creates heat that must go somewhere.

First, make certain you can legally own a rifle suppressor in your state. Beyond that, obtaining one just involves doing the paperwork and passing the background investigation. Dealers usually require payment up front, so make sure you do all that legwork ahead of time.

Suppressors are getting more popular these days, and for me that’s a good thing. They can truly improve your survivability when using a rifle in your home for self-defense. They are also a ton of fun to shoot and fantastic for young shooters or for those who are recoil sensitive.