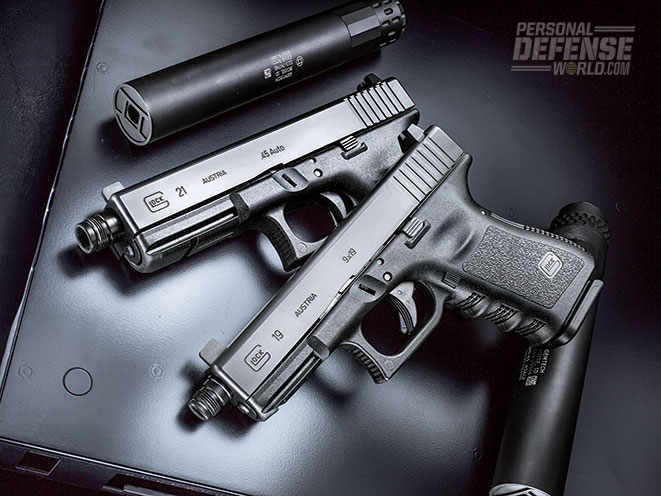 1 of 4
Photo by Sean Utley
4 New Threaded Barrel Glocks
GLOCK is now offering Gen3 pistols, such as the G19 and G21 SF, with high-quality threaded barrels for attaching sound suppressors. 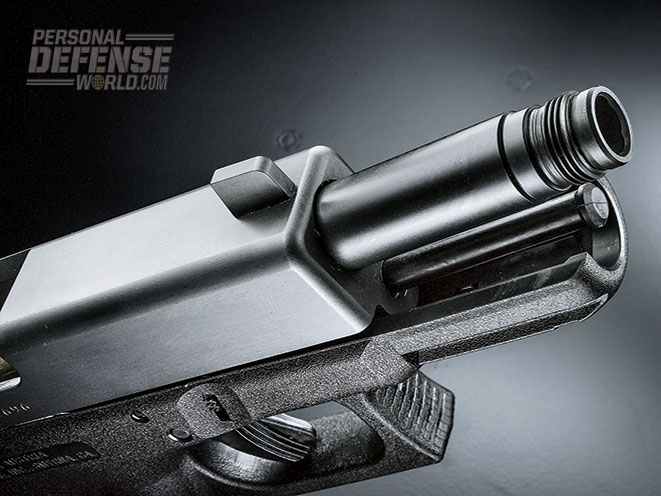 2 of 4
Photo by Sean Utley
4 New Threaded Barrel Glocks
Made in Austria, the OEM threaded barrels still feature GLOCK’s renowned polygonal rifling while posessing a metric, left-hand thread pattern: 13.5×1 for the G17, G19 and G23 barrels and 16×1 for the G21 SF. 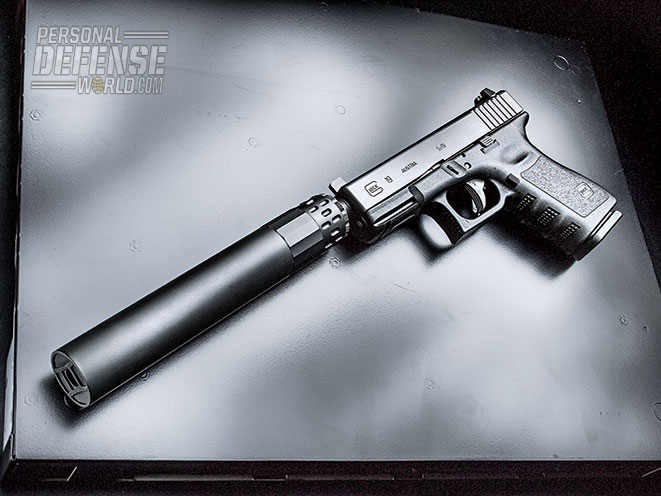 3 of 4
Photo by Sean Utley
4 New Threaded Barrel Glocks
Though a longer package, there is little increase in weight when you add a light suppressor like the Gem-Tech GM-9 to the G19 TB. 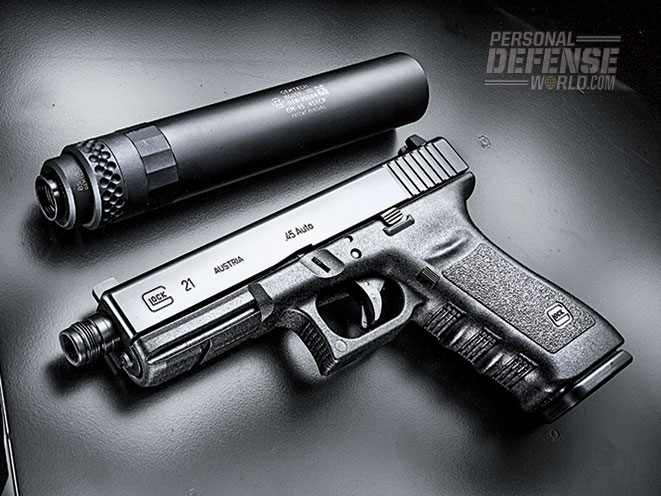 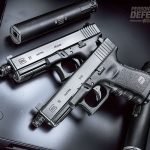 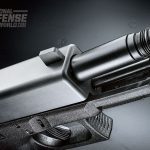 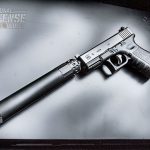 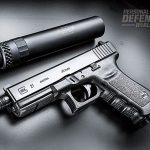 By now, it’s probably no secret that the suppressor market is growing rather rapidly. In 2013, the suppressor market had a large uptick in sales. I can’t think of any negatives in this positive trend. And like several other manufacturers in the industry, GLOCK has recognized its customers’ increased hunger for suppressors and suppressed shooting and developed its own factory-threaded barrels. Always interested in the “why,” I asked the folks at GLOCK why they decided to start pushing their threaded barrels, and they stated it was due to increased popularity of suppressors, and GLOCK wanted to provide customers with an OEM option. Fair enough.

The more attuned GLOCK fans should be happy to know that GLOCK is making the OEM barrels in Austria, but the company can make them in the U.S. as well. These barrels are chambered for 9×19, .40 and .45 AUTO and, as of right now, are only available in Gen3 G17, G19, G23 and G21 SF models. The “TB” designation has been added to the product names. There will be no threaded barrel for the G22. In Canada, the G19 and G23 are restricted for civilian sales due to their barrel lengths, but due to the longer threaded barrels, the G19 TB and G23 TB models can now be legally sold, opening up new opportunities for GLOCK and the shooters north of our U.S. border.

The threaded barrels, roughly 0.5 inches longer than their non-threaded brethren, are created from a high grade of steel that is specially produced for GLOCK. The exact type of steel and its properties are a GLOCK trade secret. The 9×19 and .40 barrels have 1-in-9.84-inch twist rates, while .45 AUTO barrels have 1-in-15.74-inch twist rates. As you might expect, the rifling is the same polygonal type made popular by the company. Not only are the barrels an option on GLOCK’s complete guns, but they can also be purchased separately from retailers. Since the barrels are made in Austria, they feature a European left-hand thread pattern: 13.5×1 for the G17, G19 and G23 barrels and 16×1 for the G21 SF.

As stated earlier, suppressor sales are making great headway. There are many benefits of using suppressors. The most obvious is the decreased sound signature. This decreased report means that the shooter’s hearing is better protected, especially if you use subsonic ammo. Of course, this also benefits those around the shooter. Suppressors are great for use in areas where excessive sound may be an issue for the locals. The likelihood of this scenario is very real, as urban sprawl means ranges that were once located outside city limits, well away from neighborhoods, no longer have that luxury. Increased suppressor use could curtail complaints from residents and fewer challenges to the validity and necessity of some ranges.

You’ll need to check your local laws regarding suppressor ownership. The acquisition process involves finishing the appropriate federal paperwork (Form 4), including fingerprinting, having your chief LE officer sign off on the paperwork and then paying $200 for the tax stamp. It may sound like a fair amount of work, but if you go about it step by step, you’ll find that it’s not difficult and is easier to complete with each suppressor that you acquire.

I recently tested a G19 TB and a G21 SF TB. They look like your standard GLOCKs but with a couple of exceptions. The first and most obvious difference is the longer barrel, and the second is the excellent elevated sights. These sights measured 0.31 inches by my calipers and easily cleared the attached suppressor. The rear sight is completely black, and the front blade has a highly visible green dot that I think works very well. GLOCK also includes a polymer thread protector with the pistols.

After collecting velocity data for both guns, I tested the G19 TB and G21 SF TB for accuracy at 25 yards using sandbags for a rest. I was rather impressed when the G19 TB managed to shoot a 1.55-inch group with Federal Premium LE 124-grain HST hollow points. The best group from the G21 SF TB, produced with Black Hills’ 230-grain JHP +P ammo, was 1.88 inches. I have tested a few GLOCK 19s recently and, even when using the same ammo, I was not able to get a group as accurate. Maybe there is something else to these threaded barrels, or maybe these suppressor sights made the difference.

I attached a suppressor to each gun and shot several rounds to check their reliability. I used a Gem-Tech GM-9 on the G19 TB and a GM-45 for the G21 SF TB. Gem-Tech shipped me the properly threaded linear inertial decoupler for use on the GLOCK pistols. No malfunctions occurred, nor did I anticipate that any would.

It’s clear that the OEM threaded barrels from GLOCK are quality additions to the company’s lineup. It appears that GLOCK has done it right, and I’d expect no less from such a company. I’ll be interested to see how the barrels test for others from an accuracy standpoint, as they seem to shoot very well. 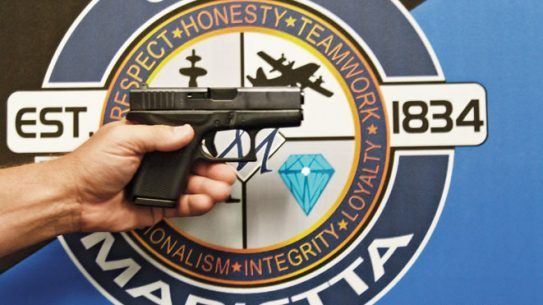