Action Shooting 101: Sharpen Your Skills While Having Fun

by Dave Norman
in Home & Self-Defense
0

The scenario on the stage briefing said, “You’re in your truck at a red light when the car in front empties itself of armed thugs intent on beating you senseless and stealing your truck. The car behind you won’t move. Your only choice is to defend yourself.”

A diagram showed five silhouette targets downrange of a parked truck. I’d have to neutralize the first three from the driver’s seat, then open the door, take cover behind it and neutralize two more across the hood. This isn’t the kind of shooting I would do on my own at the range, and it showed me exactly where my deficiencies were in shooting while seated in a vehicle.

Everyone in my squad had an interest in protecting themselves at home and on the road. We all knew that this kind of attack in our city actually happens. But before that Saturday morning at the range, we’d never practiced how to defend against such an attack.

My father taught me the fundamentals of shooting. Several instructors helped me tweak my form and improve my aim. But it wasn’t until much later that I had the chance to attend some formal tactical training.

Along the way, I discovered what many shooters have found at small matches held on ranges throughout the country (and in many other countries as well): I discovered tactical shooting matches, like those held under the aegis of the International Defensive Pistol Association (IDPA) and United States Practical Shooting Association (USPSA). Those organizations are dedicated to promoting tactical marksmanship. The IDPA uses the word “defensive” and USPSA uses the word “practical” to mean something of the same sort of thing, though how they structure their matches is rather different. Both competitions are fantastic for challenging defense-minded shooters to see how good they are with their everyday carry and home defense guns. And they’re a lot of fun to sharpen your skills. 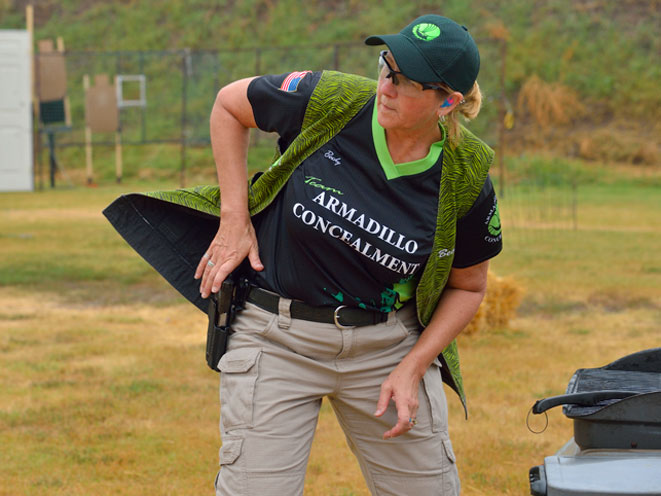 The core ideas behind IDPA and USPSA are similar. Shooters are challenged by several individual stages per match (four stages are common, while some have more). Each stage is comprised of multiple targets—primarily silhouette targets, but often with interactive steel targets and other targets as well. Shooters are briefed on each stage—IDPA stages often come with short storylines explaining a defensive shooting scenario—and then are challenged to shoot the targets as quickly and accurately as they can. Competitors aim to achieve completion without shooting the “no shoot” targets (which simulate bystanders or hostages), without breaching safety protocol and without falling over.

It’s easy to hit a nice circular bullseye target when you have time to focus on form and sight picture, but it’s a whole new world when you have to neutralize a silhouette target half-obscured by hard cover while you’re moving. Those are the skills that will translate into life-saving coordination, motor control and marksmanship should you ever be required to defend yourself. They challenge you to adapt and they will show what you need to practice. 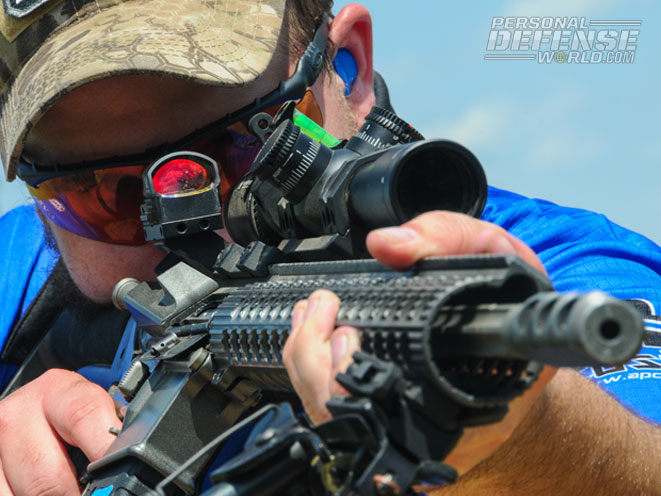 Almost every range within two hours of my office offers some kind of regular tactical match. Most have committees of volunteers who operate as local match officials in putting on competitions that fit within the rules of the IDPA, USPSA or other organizations. Some match directors are simply inspired by tactical shooting matches and create their own “outlaw” matches, so called because they are not officially associated with a national organization.

The entry fee varies from $5 to $40 for matches. The required gear varies from your everyday carry gun and holster, or your home defense arms, to high-dollar custom guns. But matches are subdivided so your scores compete only with those shooting similar equipment, and of similar skill.

That means that tactical shooting matches, at least at the weekend match level at clubs around the country, are completely accessible to any shooter who can safely handle their firearm and follow simple range commands. There are no real price or equipment barriers, even though an internet search can easily return glamorous photos of high-dollar “raceguns” (which you won’t compete against unless you buy one). 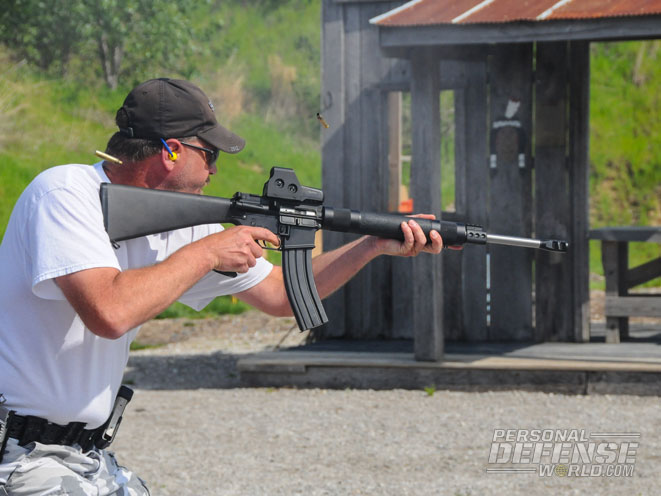 Shooting at cardboard targets that don’t fire back can only get just so realistic, but without force-on-force training equipment and facilities it’s the best we have. And it’s a lot better than practicing your isosceles stance with a bullseye target.

Shooting competitions often challenge you to shoot while moving (a favorite component of USPSA), to use cover while engaging targets (count on that in IDPA matches), draw from concealment (another IDPA standard practice), and sometimes even operate around vehicles or other obstacles. While these competitions are not training, and cannot replace proper training, they do test your skills and put you into physical—and mental—positions from which you’ve probably never fired before. 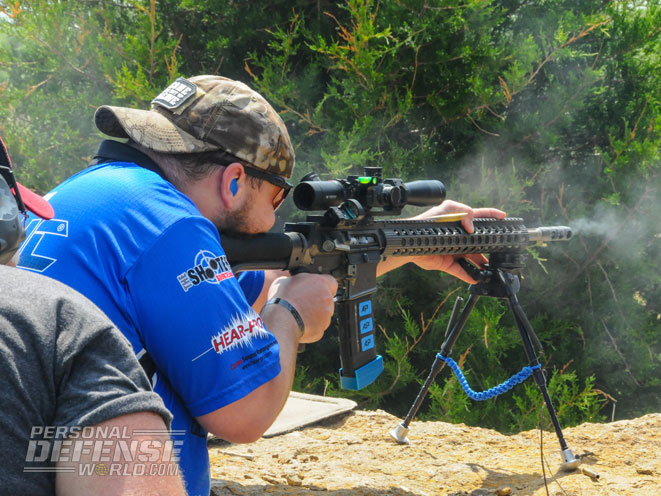 Since you cannot predict when or where you’ll be called upon to use your defensive shooting skills, it’s important to develop a rounded skill set. These matches will show you just how good you really are, and how you compare to others with similar gear and similar skill. You can even see experts, such as law enforcement officers or professional competitive shooters, and observe how they tackle tactical challenges.

What can you learn from the way a SWAT-trained officer moves? What can you learn from a “gamer” who shoots lots of these matches? What skills did the match show you that you were lacking? That’s perhaps the biggest benefit to shooting these matches: You get to see where your skills and marksmanship are weak, so that you can overcome the deficit with practice and formal training. 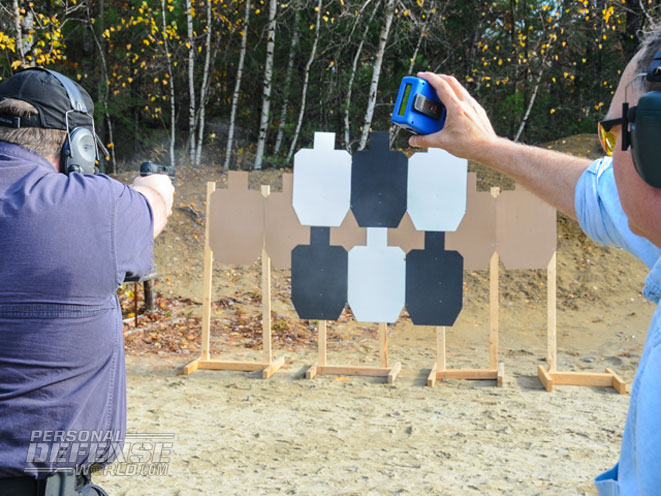 Attackers don’t stand still while you shoot them. Neither do many of the targets you could encounter at an action shooting match. One of my favorites is a silhouette target mounted to tracks that lead straight to a freestanding doorway. Opening the door pulls a retaining pin, and the target actually charges at you before collapsing backwards at the last minute, giving the shooter about two frantic seconds to neutralize it.

A common setup involves clipping a line to a steel “pepper popper” target (which stands 3.5 feet tall and falls over when you shoot it) and attaching the other end to a mechanism controlling a silhouette target. That string could pull a pin that releases a target to swing sideways down a zip line, simulating a running attacker; it could cause a spring to raise a target and then, a moment later, to raise a no-shoot target to cover it (giving you a brief period to neutralize the target before having to hold your fire); or it could cause a “bobbing target” to emerge from behind hard cover, then disappear again, on a weighted pendulum.

The steel targets are designed to disintegrate your rounds upon impact and are shot from a minimum safe distance of 10 yards; they make a nice clang and fall over when hit. The paper targets are patched between shooters, after recording your score and time. Later, an official will calculate your final score as a factor of score and time. It’s cheap fun to pay a small match fee to shoot someone else’s expensive targets, and each one challenges you in ways that might be new. 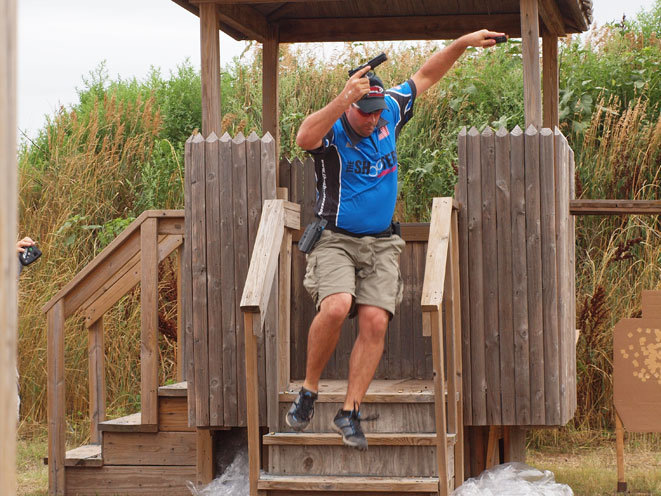 Tactical matches are generally shot with a pistol, which is great for concealed carriers and those who keep a handgun for home defense. Those who wish to develop their weapon handling and tactical marksmanship skills with a defensive shotgun or carbine and/or rifles can also look into multi-gun/3-Gun matches.

Utilizing the same sorts of targets, multi-gun matches require you to safely transition between firearms—bring the ones you actually keep for personal defense—and neutralize challenging targets specific to each. Since many ranges generally prohibit handling multiple firearms at once and “running and gunning,” these matches can offer a unique opportunity to practice techniques that might otherwise get you a good chewing-out by the range officer. 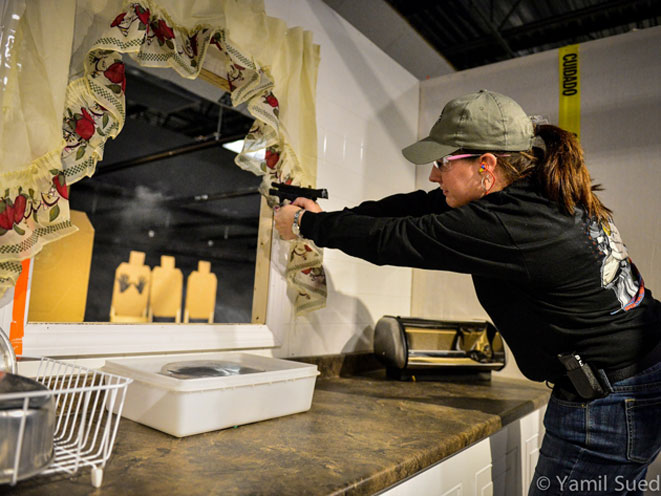 In the end, these games are just that: games. At the end of a match you will have potentially fired several hundred rounds at scores of targets, but no one will be shooting back at you. No one will be critiquing your form, unless you ask someone to. You won’t have to repeat the same drill dozens of times, and no one will be throwing things at you to distract you. It won’t be formal training, but it will give you lots of ideas for how to challenge yourself the next time at the range, and it will show you which skills you need to work on. You can probably count on making a few new friends, too, if you don’t beat them too badly!