by Dennis Adler
in Gear, Holsters
0

Gene DeSantis has built a reputation as one of America’s premier law enforcement holster manufacturers. He is credited with countless innovations in shoulder holsters and concealed carry belt, inside-the-waistband (IWB) and pocket holsters. Now, DeSantis has done away with the holster altogether. The Rail Ryder is an injection-molded IWB belt clip that mounts to a standard-length Picatinny rail, making any sidearm it’s mounted on easily concealable inside the wearer’s waistband. 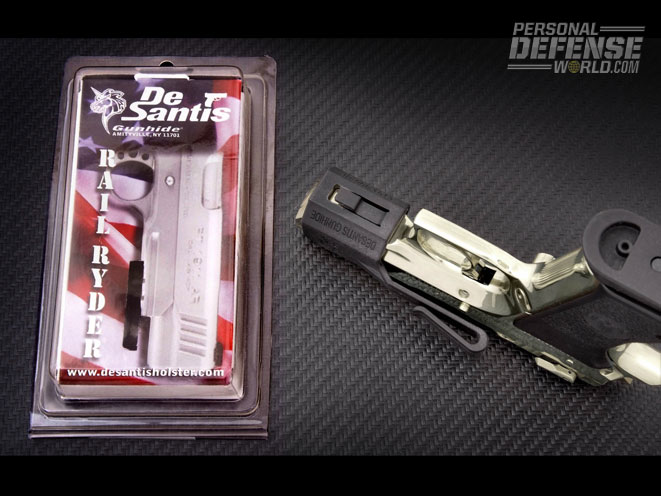 The concept of the belt clip actually predates the holster. Long, ornate steel clips have been screwed into the frames of wheelock pistols as far back as the late 16th century. Then, the clip was used to secure the pistol, which was usually over 2 feet long, to the outside of the wearer’s clothing. The clip was often suspended from a wide leather belt used to carry a sword’s scabbard. In the mid 1800s and during the Civil War, steel clips were mounted on percussion revolvers—screwed to the back of the frame and curved to go over the cylinder—as a means of better securing a weapon to a waist belt.

The Clipdraw is a similar device made for revolvers and preferable to simply stuffing a revolver into your pants and hoping it will stay put. A J-Frame-size revolver grip clip has an extended lip to catch the waistband or belt. Still, nothing really secures a gun like that foolproof, centuries-old belt clip. Today, belt clips are readily available for small .380 ACP semi-autos like the Kel-Tec and other small- to medium-frame pistols. But when it comes to stashing a large-frame pistol with a Picatinny rail, the options are few. That is where the Rail Ryder from DeSantis comes in. 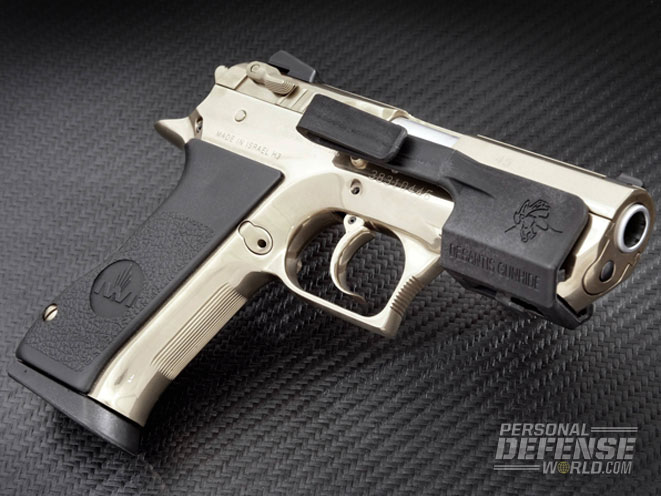 DeSantis’ device is designed to slide onto the Picatinny rail and solidly lock in place with a tensioned catch, which can only be released when lifted out of the rail notch by either a shell case lip or, ideally, the edge of a coin. A quarter works perfectly. Once mounted, any medium- or large-frame semi-auto equipped with a Picatinny rail can be instantly converted into an IWB sidearm, one that stays solidly put. 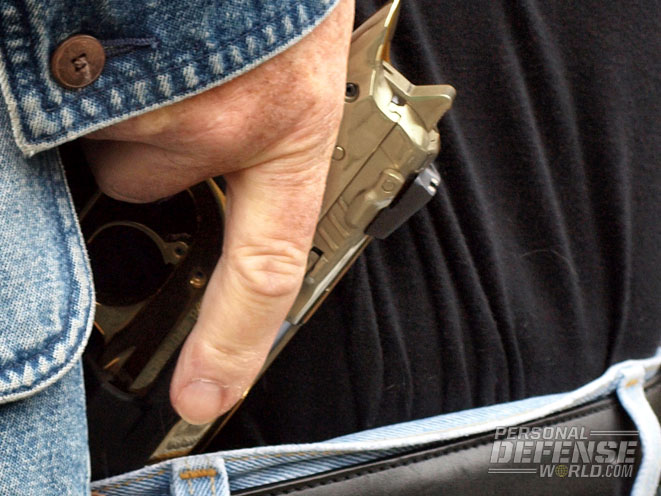 For an evaluation of the Rail Ryder I went all in and opted for as big a gun as I could comfortably carry: a .45 ACP Baby Desert Eagle. The gun weighs 2.25 pounds empty and has an overall length of 7.5 inches, 4.5 inches of which goes down inside your pants waist.

I like this gun with the Rail Ryder for several reasons. The first is its DA/SA action with a decocker. The CZ 75 design (and any other DA/SA or DAO with a decocker and manual safety) is preferable for IWB carry since there is virtually no chance of an accidental discharge on drawing the gun. Yes, it is a beat or two slower to get into action, but the added safety margin when the barrel is on the inside of your waistband is worth it. Second, the Rail Ryder allows one to carry a slightly larger gun as it adds almost nothing to the dimensions and does away with the added bulk of an IWB holster. Third, as for ease of draw, the high-strength, injection-molded belt clip keeps the gun placed firmly, but a straight upward pull easily releases it from the belt.

As an easy means of carrying a large-frame semi-auto concealed, the Rail Ryder gets the job done for $19.99.

Concealed Carry Tips & Techniques for Dressing Around the Gun