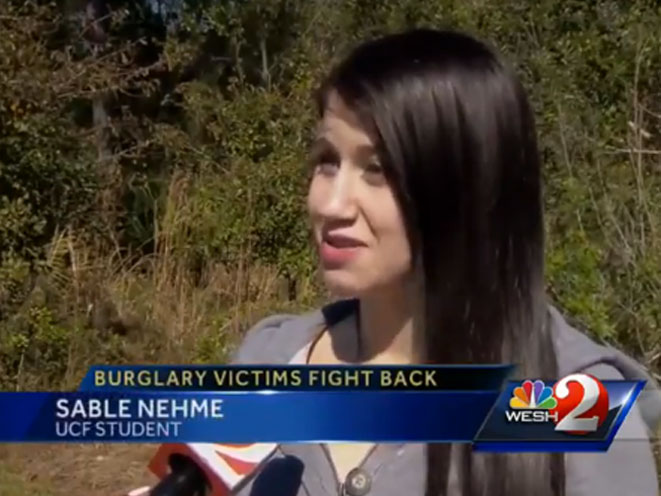 A female college student pulled a gun on two home invaders near the University of Central Florida.

According to WESH, UCF student Nour Skargree, 22, was in his apartment at the Village at Alafaya Club Tuesday night when he heard a knock on the door. When he opened the door, he was forced to the ground at gunpoint while two men burglarized his apartment.

“He grabbed me by the throat. He took me a little further into the living room and pushed me down and said, ‘Don’t move. Just stay down,'” Skargee said. “They didn’t realize my girlfriend was in her room and thank God she was in her room. I yelled, ‘Hey, grab the gun.'”

As WESH reports, Skargee’s girlfriend, Sable Nehme, grabbed the gun. One of the home invaders kicked her bedroom door down, only to come face-to-face with an armed Nehme.

“I quickly closed my door and locked it to get some extra time to get the gun,” Nehme said. “He immediately, when he saw the gun, turned right back around, darted out and both of them fled the apartment.”

Upon seeing the gun, one of the suspects dropped his gun, which actually turned out to be a pellet gun, WESH said.

“If we didn’t have a gun, it would have been game over. They were bigger than me, bigger than both of us,” Skargee said. “We had no way of stopping them. The gun was the one thing that made them run.”

Police arrived shortly thereafter. WESH notes that K-9s and a helicopter were used in an attempt to locate the suspects, to no avail.

WESH is encouraging anyone with information related to the incident to call Crime Line at 800-423-TIPS. 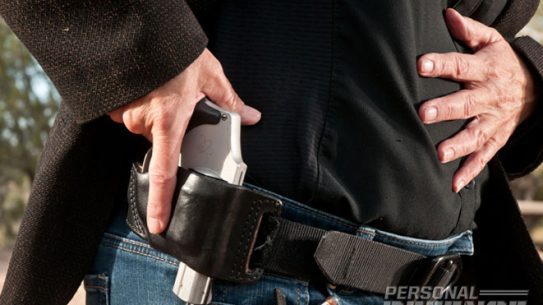 A New Mexico store owner opened fire on an armed robber, shooting him in...