An Idaho apartment resident was forced shoot a machete-wielding intruder inside his apartment, and the entire incident was captured on video.

According to the Idaho State Journal, Pocatello apartment resident James Cvengros, 29, was sleeping in his apartment with his girlfriend, Kaila Gearhart, when he was awoken by the sound of his upstairs neighbor, 54-year-old Twain Thomas, breaking out the windows of his own apartment. Gearhart immediately called 911, and a quick-thinking Cvengros started video recording the event and grabbed his gun.

“It sounded like a train wreck upstairs,” Cvengros said. “Then I heard him break into the other apartment.”

As the Idaho State Journal points out, another neighbor can be heard in the video screaming at Thomas to get out, using an ornamental staff to chase him out. At that point, Thomas zeroed in on Cvengros’ apartment.

In the video, Cvengros can be heard telling Thomas that he is armed as Thomas hacks through the door and steps in wielding a machete. Cvengros opens fire and shoots Thomas three times.

“He didn’t stop until the third shot,” Cvengros told the Idaho State Journal. “Then he went down.”

Thomas survived the shooting, which occurred in February of 2014. He was arrested and pled guilty to attempted murder and aggravated assault, and sentenced to a combined sentence of 10 years fixed and 10 years indeterminate for both charges, the State Journal reports.

This isn’t the first time Thomas and Cvengros have gotten into a confrontation. Before last February, Thomas kicked in Cvengros’ door after claiming that Cvengros was playing his music too loud. The police were called and Thomas was cited for unlawful entry. This incident, plus multiple other times where Thomas reportedly threatened both Cvengros and Gearhart, prompted Cvengros to buy a 9mm home defense handgun.

“As good Christian people, we know it’s wrong to kill,” Cvengros told the Idaho State Journal. “But we all have the right to defend ourselves.” 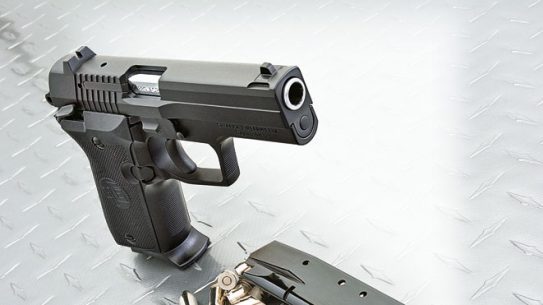 Chiappa pays homage to the classics with its 14-shot, bigger and bolder MC 14...