Have backup plans and ammunition, because predators determined to prey on innocents will stop at nothing but a good guy with a gun.

Most people (read: the jury pool) don’t carry guns. Many private citizens who carry guns don’t carry spare ammunition, even if their gun of choice is a five-shot revolver. Thus, it’s entirely possible that if you’re in a shooting and the evidence shows you had a lot more rounds than those on your person, opposing counsel is likely to argue that this means you were out for blood.

It’s a cultural thing. Example One: If you saw the movie The French Connection, you probably know that Gene Hackman’s lead character, “Popeye” Doyle, was based on a real-life NYPD detective named Eddie Egan. Egan worked in a time when New York City cops were limited to .38 Special revolvers. He made a point of carrying more spare ammunition than the regulations required—and as a result, his brother officers who carried only the minimum required nicknamed him “Bullets.” If that’s the way some cops see other cops, can we be surprised that a private citizen who carries more ammo than some others might be seen as going over the top?

Prosecutors and plaintiffs’ lawyers alike know that the public has been terrorized by political media campaigns against “assault weapons” and “high-capacity magazines” after notorious mass shootings. Example Two: In the Trolley Square Mall shooting in Salt Lake City, the killer had a relatively low-capacity 12-gauge shotgun and a five-shot .38 Special, but he also had a backpack full of ammo.

Example Three: In the heartbreaking Sandy Hook massacre in 2012, the killer entered the school with hundreds of rounds of ammunition, and fired 156 shots, killing 26 innocent victims.

Example Four: Twelve people were murdered, and 58 more wounded, in a theater in Aurora, Colorado, by a killer who festooned himself with a very high round count. While all three of these atrocities are best seen as examples of the helpless victims created by “gun-free” zones, they are also examples of the horror an unscrupulous attorney can try to use to taint a good person falsely accused of wrongdoing, when in fact he or she fired in legitimate self-defense. 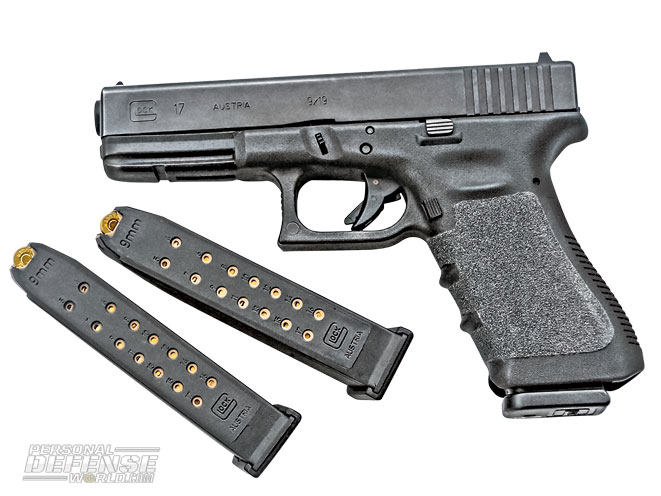 Any responsible firearms or CCW instructor in the private sector, like any good law enforcement trainer in a police academy, will recommend the carry of spare ammo. One reason is that, quite simply, the defensive handgun is emergency safety/rescue equipment, and redundant capability must be in place in case it fails. With the semi-auto pistols most widely used today for defensive purposes, malfunctions are most often traced back to defects in the ammunition or in a gun’s magazines. For many stoppages, which prevent the gun from working, the quickest and simplest lifesaving fix is to clear out the ammo and magazine in the gun, reload and carry on.

The other reason to carry extra ammo is, quite simply, some gunfights go to the far end of the bell curve and require a lot of shots to be fired to end the hostilities of homicidal criminals. On the LE side, look at Example Five, the shooting involving Sergeant Timothy Gramins in Illinois. In a shootout with a homicidal criminal armed with multiple guns, Gramins had to fire 33 shots from his .45 before the fast-moving, cover-taking criminal went down for good. The gunman had taken 14 hits from 230-grain .45 ACP hollow points and was still up and running when Gramins’ last three carefully aimed shots struck the man in the head and killed him. Today, Gramins carries a full-capacity 9mm pistol and no less than 145 rounds of ammunition on his person when he works on patrol while in uniform.

On the armed citizen side, consider Example Six, the Micanopy, Florida, shootout between gun shop owner Harry Beckwith and a gang of armed robbers at his store. Using a legally owned 9mm submachine gun and an AR-15, Beckwith had fired 105 shots by the time the last of the gang had either died or fled. A grand jury ruled his shooting totally justifiable. 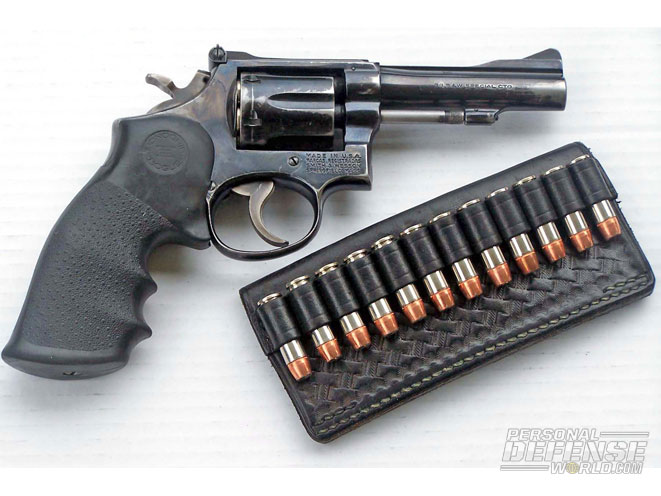 Now, let’s examine some cases where prosecutors made a big deal out of the defendant having “too much ammunition” and attempted to prove it was indicative of “malicious intent.”

RELATED: 5 Cases Where The Attacker’s Violent Past Meant Zero During Trial

Example Seven: Law-abiding gun owners in Massachusetts are legitimately concerned about Commonwealth v. Pepicelli, in which a young man was convicted of a wrongful death after he and his brother were involved a shooting with some local people who had been harassing them and came after them while armed. Both of the brothers were licensed to carry and the prosecution is hammering on the fact that the brothers were not only both carrying .40 pistols when the gunfight went down, but that they had four magazines of ammunition between them. I know and trust the lawyer who did the appeal, Lisa Steele, who is widely considered the top appellate lawyer in the country for self-defense cases that went wrong at the trial level.

While the Pepicelli conviction is most commonly seen in legal circles as a failure for the trial court to allow expert testimony and testimony to the proclivity toward violence of the people on the other side of the shooting, Steele confirms that the Commonwealth did indeed go after the carrying of spare magazines as indicia of intent to shoot people on the day in question. It doesn’t appear to have been satisfactorily explained to the jury why the brothers were not only armed but carrying spare ammo. 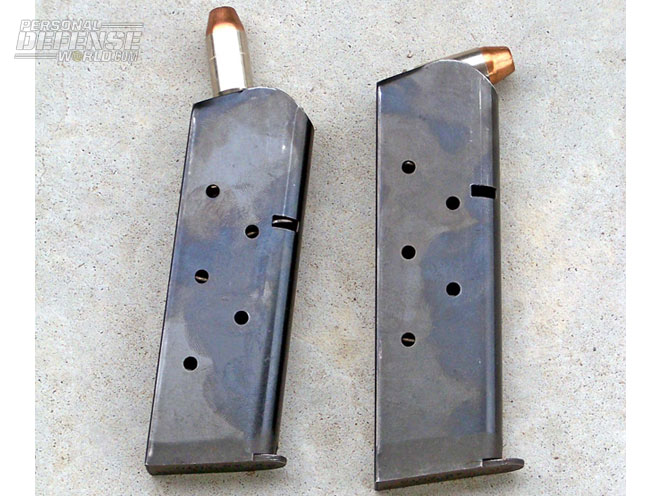 Example Eight is the case of New York v. James Pennington, which occurred in upstate New York. I didn’t know about this case until a couple of days after its guilty-of-murder verdict was decided, when the wife of the hapless defendant called me and there wasn’t a thing I could do to help by then. A man licensed to carry was attacked by a much stronger man, and fired three self-defense shots that killed the attacker. The defendant had been carrying a licensed single-stack 9mm pistol under his left arm in a shoulder rig, and two spare mags to balance on the opposite side. The defendant’s long-suffering wife told me that the prosecution made a huge deal out of it, essentially saying, “If he wasn’t planning to commit murder that day, he wouldn’t have been carrying enough ammo to kill 25 people!” Any competent expert witness would have advised that defense lawyer to do two things. One would have been to ask each of the cops who testified for the prosecution during cross-examination, “Officer, what does the city require you to carry to protect the public you serve?” The answer, in that city at that time, would have been “A 9mm pistol fully loaded, with a round in the chamber, and two spare 17-round magazines.” The jury could have then done the math: 52 rounds. And a good defense lawyer would have argued on summation, “They say the 25 cartridges my client had on his person were indicia of malice, yet every police officer in this city carries more than twice that to protect us all.”

The second argument not made was, “My client could have shot him 25 times, but he only shot him three times, because after the third shot, the deceased stopped trying to murder him.” The failure to make those arguments, among other things, resulted in a conviction for murder and a sentence of life in prison. 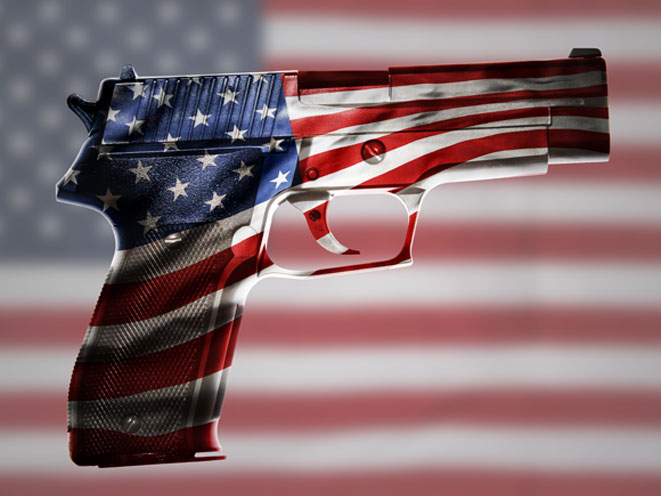 No honest person who understands the reality of violence and self-defense will tell you not to carry spare ammunition. The lesson is, be able to articulate why you carried more than a minimum number of cartridges, and be able to get that across to the judge and jury.

I don’t carry a gun without spare ammunition: normally two spare magazines for a single-stack semi-auto, more than that if I’m wearing a revolver as my primary and at least one spare magazine if I’m wearing a double-stack autoloader. If 35 years as an expert witness in shooting cases hadn’t convinced me it was defensible, I wouldn’t carry it.

Carrying enough ammo is absolutely defensible. The bad news is that you’ll have to prove it to a jury that has been exposed to a lifetime of anti-gun media brainwashing to the contrary.