by Massad Ayoob
in Guns
0

The subcompact GLOCK 42 carries 6+1 rounds of .380 AUTO ammunition in an extremely durable, snag-free design that’s easy to use in high-stress situations.

Six months after its introduction in January of 2014, the GLOCK 42 had already earned its chops as a concealment pistol. Recognizing the gun’s significance, every major holster manufacturer introduced carry rigs fitted for it as quickly as they could. Small, local artisans crafting Kydex holsters made a point of offering them for the smallest, lightest GLOCK ever, too.

The GLOCK 42 has been carried in boots, back pockets and Baggallini purses. The G42’s feathery weight (under 14 ounces) and wafer-thin profile (less than an inch thick) seem to spark concealment creativity. I’ve personally tried it in an inside-the-waistband (IWB) holster both at my belt line and clipped to the elastic strap of a ballistic vest. One police officer in Marietta, Georgia, came up with his own design for securing the G42 in an externally worn body armor carrier.

Speaking of the Marietta Police Department (MPD), this forward-thinking agency had made a variety of backup guns available to its officers for a long time. Because of frequently hot and humid weather, relatively few of its officers took advantage of that option. The department then acquired 100 GLOCK 42 pistols. Almost overnight, the guns were spoken for, and now far more Marietta cops are carrying these guns as backups. The G42’s flat concealability and extremely light weight, combined with its shootability, made the difference. It helped, of course, that Marietta had been a GLOCK department since the 1990s, with its officers currently carrying .40-caliber G22s as uniform weapons, so all of the MPD’s armed personnel were already familiar with the GLOCK platform. By simply adopting the GLOCK 42 as an option, the department has vastly increased the number of its people carrying lifesaving backup guns. Lieutenant Brian Marshall, the head of firearms training for the agency, reports that the G42s have worked very well in training and that the officers are delighted with them.

I, and every other person I know who’s been through GLOCK’s Armorer Course, raised an eyebrow upon first field stripping a GLOCK 42. It’s not just “Honey, they shrunk the GLOCK”—some of the parts are significantly different. Field stripping is the same as with earlier GLOCK models, however, and once the shooting starts, it’s all GLOCK.

RELATED: You Got A GLOCK. Now What?

Accustomed to shooting GLOCKs, I did not find it pointed differently than the larger models. The trigger pull was no surprise, either. While the factory-specified trigger pull weight is listed as 5.5 pounds, my own G42 averaged 7.33 pounds when weighed from the toe of the trigger and 8.43 pounds when weighed from the center. However, it still felt like 5.5 pounds. The reason is that the G42 has an extremely short trigger reach, or the distance from backstrap of the frame to the face of the trigger. This is a godsend for people with short fingers or smaller hands, because it lets them “get enough finger” on the trigger. Conventional wisdom has long held that the pad of the trigger finger (i.e., the center of the fingerprint) is the sweet spot for a short, light pull and that the crease of the distal joint is the ideal placement for a heavy or long pull because it gives the finger more leverage against firmer resistance. This greater leverage is essentially what makes the trigger pull feel lighter.

Pistols in .380 AUTO are so often seen as short-range guns that it has come into vogue for some gun magazines to test their accuracy at no longer a distance than 7 yards. Some .380 AUTO pistols do group atrociously from 25 paces. Not the GLOCK 42, however.

I recently had the chance to test the GLOCK 42. From a Caldwell Matrix rest on the 25-yard bench, I tested a trio of .380 AUTO loads, each of which has its advocates as the “defensive load of choice” for this caliber. Those who put penetration first and foremost speak glowingly of Buffalo Bore’s standard-pressure .380 AUTO load with 100-grain, hard-cast, flat-point bullets loaded to 975 feet per second (fps). Recoil was mild. The overall group measured 6.05 inches, due in large part to one stray shot which may have simply been my error that went unnoticed. The other four shots were 3.85 inches apart, and the best three—a measurement that tends to factor out human error and come close to what the same gun and ammo will do from a machine rest—were in 3.25 inches.

Another school of thought is that full metal jacket (FMJ) ball ammo is what’s needed to get .380 AUTO bullets into a deadly threat’s vitals. Winchester’s 95-grain FMJ is a favorite for this because it has a flat meplat (front striking surface), which should, at least in theory, be more effective than a round-nose profile. With that load, all five shots from the GLOCK 42 clustered into 3.6 inches at 25 yards, and the best three of those were in 1.6 inches. That is promising!

RELATED: 3 Pro Trainers on Why GLOCK Pistols are Safe, Easy to Use & Reliable

Expanding bullets have worked so well in other calibers that many stay with that concept for the .380 AUTO. One of the most popular is the heaviest .380 AUTO jacketed hollow point (JHP) cartridge out there, the 102-grain Remington Golden Saber designed by Dave Schluckebier. This proved to be the most accurate load, with a quintet of holes 3.55 inches apart. That may have encompassed another unnoticed shooter error, because four of those hits were in 1.45 inches, and the “best three” cluster was a mere 1.2 inches. I was left without a doubt: The GLOCK 42 is remarkably accurate when compared to other .380 AUTO pistols.

Of course, a GLOCK 42 will never be used from a benchrest for its intended purpose, the protection of the innocent from extreme criminal violence. From a two-handed standing position at 7 yards, multiple experienced men and women on our test team were able to hold 1-inch groups while practicing precision rescue shots. In rapid fire, the negligible recoil of the G42 and its clean trigger stroke made it extremely controllable, even while shooting one-handed. There’s no long, heavy pull to jerk the muzzle off target when the shot must be made in a hurry.

Our test team signed confidentiality waivers and received a pre-announcement test sample of the GLOCK 42 in late 2013. We fired hundreds and hundreds of rounds through it, from flat-nose lead rounds to FMJs and a wide assortment of JHP cartridges. By the time we made a quick video for TACTICAL-LIFE.com, we could honestly say that it had run 100 percent without a single malfunction. Similarly, the vast majority of GLOCK 42 owners with whom I’ve spoken, as well as the folks on the internet, seem to be getting 100-percent reliability from their GLOCK 42 pistols right out of the box. 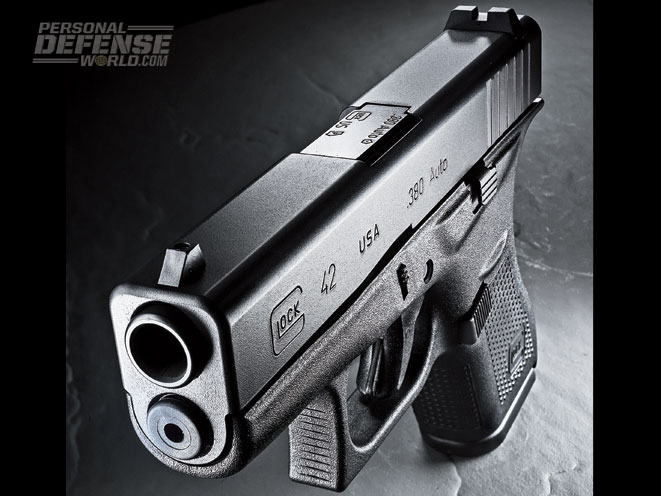 Long ago, there was a famous advertising campaign for an automobile that simply said, “Ask the man who owns one!” That seems to be true of the GLOCK 42. Ever since this little pistol was introduced, it has been backordered.

Yes, many of us wished for a GLOCK in this size format in the more powerful 9×19 chambering. I certainly would not rule that out in the future. At the moment, however, the GLOCK 42 is a splendid balance between carry comfort, concealability and shootability for those who are happy with the .380 AUTO cartridge.