The CDR-15's upper and lower receivers are machined from a bllet of 7075-T6 aluminum. Note the finger rest near the magazine release.

A takedown AR-15 pistol that fits into a briefcase would be indispensable if one were writing a spy novel.

In reality, you don’t need to be Ian Fleming or Robert Ludlum to conjure up such guns. The latest DRD CDR-15 Pistol is a three-piece takedown firearm that comes in an unobtrusive, Royal Case Co. fitted carry case that’s ruggedly built to take a world of abuse and keep its contents safe and ready to be assembled when needed, even if it’s only at the local shooting range and not some dimly lighted alleyway in Istanbul.

The CDR-15 is a finely crafted takedown AR-15 that, in its new pistol version, allows for any accessory buildup desired, from basic BUIS mounted to the integrated Picatinny top rail, to optics, and tactical lights and lasers, which can be affixed to the takedown barrel’s removable handguard rails.

A comparatively new manufacturer in the AR-15 marketplace, DRD Tactical was established in Dallas, Georgia, in 2010. The custom rifle-maker has come a long way in just five years by building high-quality, innovative takedown rifles and pistols. DRD’s takedown rifle concept was originally developed for consideration in the Joint Special Operations Command (JSOC) Clandestine Break-Down Rifle proposal. DRD Tactical eventually built a commercial semi-automatic version and recently added the takedown pistol. According to the company, the CDR-15 Pistol is the first and only takedown version of its kind. It uses a patented threaded collar to secure the barrel to the upper receiver, and a patented quick-lock removable handguard over the barrel that takes assembly time down to less than 30 seconds! The standard-length barrels for the pistol version are 10.5 and 11.5 inches. The model I tested came with the shorter 10.5-inch barrel.

DRD Tactical specializes in takedown or briefcase rifles and pistols as well as custom-built AR-15 upper and lower receivers, all of which are manufactured in Georgia. For the CDR-15 Pistol, the upper and lower receivers are machined from 7075 T-6511 billet aluminum for strength and a light overall weight, with the pistol averaging 5.2 pounds with an empty magazine. Overall length of the CDR-15 Pistols, including the 10.5-inch barrel, muzzle-brake flash suppressor and fluted carbine buffer tube, is 26.87 inches, making this a very maneuverable AR-15 pistol for close-quarters defensive use. The DRD Tactical pistol is well suited for use by protection details where an AR-15 tactical carbine (takedown or otherwise) might not be practical for security personnel. The compact size and easy takedown/assembly definitely make this an interesting option for any number of tactical deployments.

In the civilian world, AR-15 pistols have grown exponentially in popularity over the last few years, but until this point DRD Tactical had confined its designs to rifles. The pistol, which can be carried disassembled in a variety of ways dictated by the level of security and concealment required, is unique in this category of takedown AR platform.

The CDR-15 can be taken down and stored in two or three pieces, the latter being advisable for speed of assembly by already having the handguard removed from the barrel so all three pieces—lower and upper receiver unit, barrel and handguard—can be quickly accessed and assembled in order. The carrying case design allows for multiple arrangements as well as storage for two 30-round magazines, ammunition and optics, which, depending upon size and mounting position, can be left attached to the pistol’s upper receiver.

All AR-15 pistols with traditional operating systems and carbine-length buffer tubes handle similarly to an SBR, minus the shoulder stock. This AR pistol uses a carbine-length direct gas system, a Colt-style cast aluminum charging handle and a single (reversible) thumb safety. The lower receiver is a DRD Tactical design with a distinctive contour that creates a trigger-finger rest that also allows quick access to the magazine release. It is a very clean and efficient design. As for durability, the entire pistol has a non-reflective hardcoat anodized black finish that stands up to abuse.

The CDR-15 Pistol comes with a standard AR-15 trigger. It has a long, crisp pull that averaged 6.6 pounds on a Lyman trigger-pull gauge. Overall, the gun has modest recoil with most ammunition, and the rounded and deeply fluted buffer tube is not abrasive should it come in contact with your cheek. The standard pistol grip is an excellent checkered and fluted M16A2 design, which provides a finger groove for a more secure grasp of the lightweight CDR-15 Pistol.

The takedown and assembly process is well engineered and centered around DRD Tactical’s patented quick-release handguard (which can be fitted with three 4-inch Magpul L4 accessory rails included with the gun) and the barrel’s threaded mounting collar. With the CDR-15 Pistol unloaded and cleared (the bolt locked back and magazine removed), the process, either when assembling or taking the gun down, begins with opening the handguard’s quick-release lever and pulling the locking pin. This allows the handguard, rails and any attached accessories to be slipped off the barrel assembly. For takedown, unscrew the threaded collar and pull the barrel assembly from the receiver. Reverse the process to assemble. My average time is 21 seconds for assembly and 17 seconds for disassembly beginning with the gun at the ready position, the magazine removed and the bolt locked back. Add a few more seconds for clearing the gun and (for assembly) removing the components from the carrying case and you are still at about 30 seconds.

Since the CDR-15 Pistol does not come with sights, I opted to go right for optics, fitting the gun’s 7-inch receiver rail with an Aimpoint Micro H-1 on a Micro LRP quick-release mount. The Micro LRP not only facilitates quick mounting but raises the Micro H-1 high enough that backup iron sights can be used to co-witness the target. The Micro H-1 is an ideal red dot for AR-15 pistols and even more so with the CDR15 Pistol, as it is compact enough (2.4 by 2.4 by 1.6 inches with a quick-release mount) to be left attached to the upper receiver in the carry case. The Micro H-1 has unlimited eye relief and 12 adjustable brightness settings for the red dot (in 2 or 4 MOA). In addition, the unit’s caps that cover the adjustment knobs can be used to adjust the sights. No tools required, not even the edge of shell case. 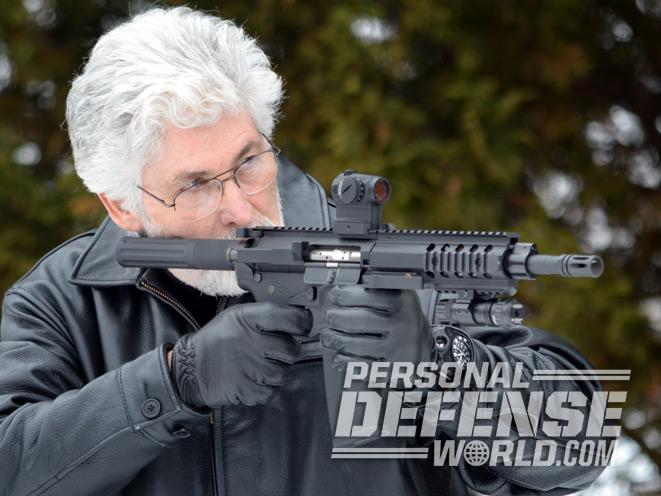 Tests were done from a semi-rested position at a distance of 25 yards from the target. For accuracy, I opted to keep all tests confined to this protocol, rather than going off-hand and engaging targets at varying distances. Three premium brands of ammunition were selected: Winchester Target 55-grain FMJs, Federal American Eagle 55-grain FMJs and HPR Black Ops 62-grain OTF rounds. The Black Ops clocked 2,428 feet per second (fps) from the pistol’s 10.5-inch, 4140 steel, Melonite-coated barrel, while American Eagle cleared the ProChrono chronograph traps at 2,530 fps and Winchester’s Target load clocked an impressive 2,805 fps average.

After sighting in the Micro H-1, range tests were fired in five-round groups with each brand of ammunition. Using the test bench as an elbow rest, the test groups were fired with the support hand grasping the magazine well. Groups continually averaged under 2 inches. Best five-round groups were achieved with American Eagle’s 55-grain FMJ and HPR’s 62-grain OTF, the only frangible round used in the test. Both brands placed all shots at 1.12 inches with overlapping pairs. The best five rounds of the Winchester Target load measured 1.35 inches.

In the real world, resting your support-hand elbow on a hard surface for stability might not be an option, but knowing that the pistol is capable of such accuracy, under less than ideal conditions, you are still able to get threat-stopping accuracy. With the 10.5-inch barrel, the CDR15 Pistol was well balanced for an AR-15 pistol and consistently on target at 25 yards. As a weapon destined for close-quarters battle, the CDR-15 Pistol would be an ideal choice when equipped with optics and a laser sight. 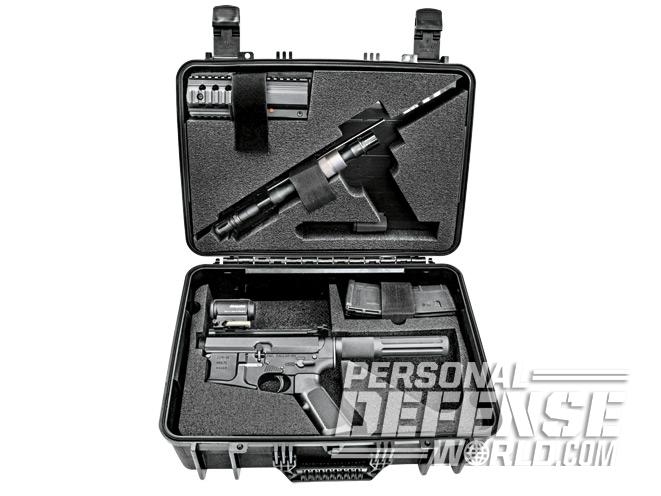 AR-15 pistols are not right for every circumstance, but for personal protection use, whether at home, in the field or on the job, they provide an option few firearms can offer—compact size combined with the reliable and effective firepower of an AR-15 rifle. DRD Tactical takes it one step further by making the CDR-15 Pistol an easily stored and transported takedown pistol that can be made ready in 30 seconds or less. It will take some time to raise that bar.