by Walt Rauch
in Guns
0

Taurus’ first cartridge and shotshell revolver, named “the Judge,” was introduced in 2006 and chambered in .45 Colt and 2.5-inch .410 shotshell. Why it earned the label of “the Judge” or “Judge” is not clear, but the story suggests this was due to an interest by judges who wanted to be armed while on the bench in a crowded courtroom. However, these judges were concerned with a handgun round over-penetrating or a missed shot hitting a bystander, so they needed a defensive handgun capable of firing a lethal round with minimal penetration. Since the Judge had both cartridge and shotshell, this was exactly what the judges wanted and needed.

Handgun buyers also saw the combination as desirable and bought the Judge in large numbers. How successful was the concept? Well, Smith & Wesson now has its own version of the Judge and ammunition companies now offer 2.5-inch and 3-inch .410 shotshells, which are loaded specifically for self-defense.

The .454 Casull was developed in 1957 by Dick Casull and Jack Fullmer, but little of note happened with it until Ruger chambered its Redhawk for it in 1997. This was followed in 1998 by Taurus chambering its Raging Bull for the .454 as well. Since the .454 Casull cartridge is based on the shorter .45 Colt, this shorter round works in a .454 Casull-chambered gun.

The Judge is chambered in 3-inch .410 shotshell, which is a step up in power from the 2.5-inch version. However, the 2.5-inch also can be used in the gun. 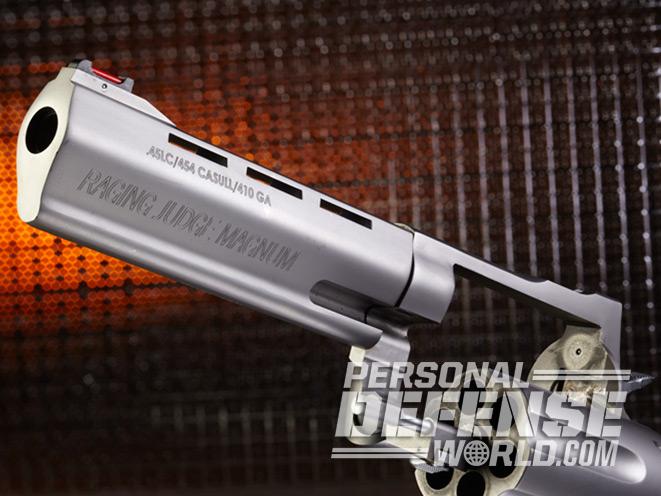 The Raging Judge Magnum is an all-stainless-steel revolver with a brushed finish, holds six rounds, is double and single action and weighs 4.5 pounds. It has a 6.5-inch barrel with full-length underlug and a faux rib in the barrel, all of which is complemented by three longitudinal cuts in its upper portion. The barrel’s full-length underlug, when relieved, also serves as a shroud for the extractor rod. 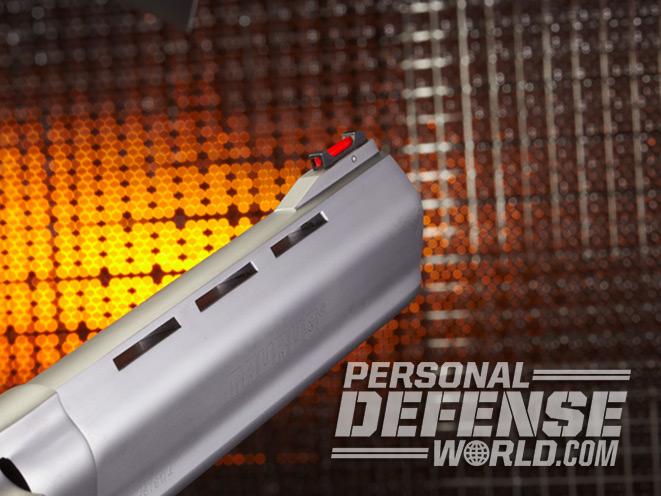 A red, fiber-optic front sight is pinned into a sight base that appears to be part of the barrel. The gun’s sights are fixed.

The Judge’s smooth-faced trigger is curved, offering 13.5-pound double-action pull weight and a single-action pull weight of 5.5 pounds. The machine-checkered hammer spur is slightly wider than the body of the hammer. With the hammer forward, the Taurus Security System can be accessed since its keyhole is below the spur and in the frame.

As to what you can expect when handling and shooting the Raging Judge Magnum, I employed the help of my friends AJ Stuart, Irv Gill and Joe Mulligan at our gun club’s range and set up Shoot-N-See LE B27 target centers placed at 3, 5 and 7 yards, on which AJ and Joe shot pairs of Winchester 250-grain Partition Gold .454 Casull ammo. They kept the pairs within 2 inches of each other while firing at a measured and steady pace. The anticipated fierce recoil was a non-starter and it was only after firing about 20 rounds that AJ commented that his hand was now stinging with every shot. Joe then fired roughly the same amount of ammo, but his only comment was the gun has less felt recoil than he experiences shooting full-powered .44 Magnum loads in his 6-inch-barreled S&W Model 629.

I shot less, firing 15 rounds, and wore Uncle Mike’s padded shooting gloves. My only comment then was I found the gun a bit too heavy to hold extended for any length of time. Still, and to the good, the combination of a heavy barrel, heavy gun and rubber grip effectively minimized muzzle flip and felt recoil. For fun we all did some unstructured shooting and used the normally hard-hitting (at both ends!) CorBon 300-grain JHP and the also-powerful Magtech 225-grain JHP. 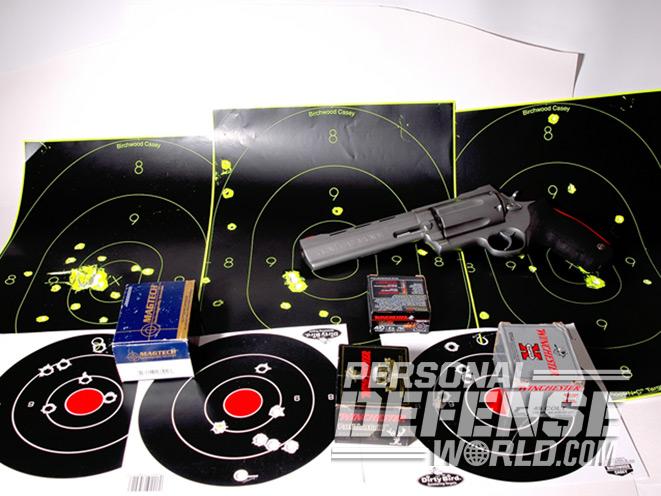 Then, with fresh targets hung, we all shot the Winchester’s top-selling PDX1 Defender .410 shotshells, which are loaded with three plated Defense Disc projectiles and 12 plated BBs. 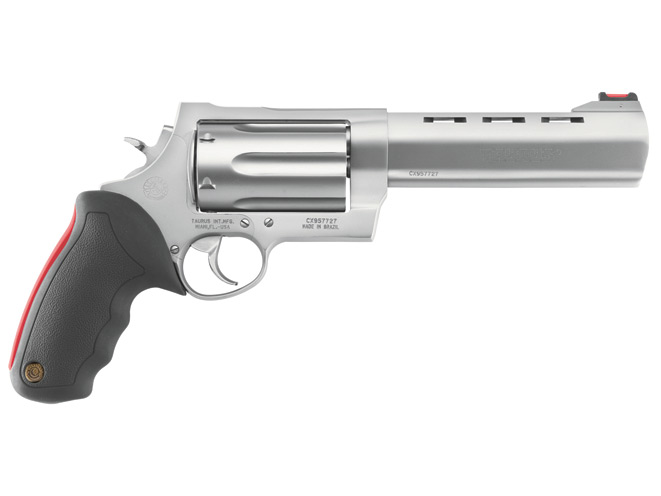 Purpose is in the eye of the holder. The Judge is good for hunting and pest control around the homestead. It can also pull duty as a solid home or vehicle defensive tool when loaded with the appropriate ammo. I see the Raging Judge Magnum as mainly a hunting handgun because of its options, such as having the choice of using pellets or bullets, either of which greatly expand its hunting applications.