The National Shooting Sports Foundation (NSSF) today released a new, first-of-its-kind educational resource, the “How to Talk to Your Kids about Firearm Safety” video. The video, starring champion shooter and mother Julie Golob, encourages parents to have “the talk” about firearm safety with their kids sooner rather than later, and provides tips for how to have a helpful discussion.

“Too often, children don’t know what to do if they find a gun,” said Steve Sanetti, President and CEO of NSSF, which developed and sponsors the Project ChildSafe firearm safety education program. “This video opens a door for honest conversation and empowers parents to be the authority on gun safety for their kids, whether they have guns in their homes or not.”

The “How to Talk to Your Kids about Firearm Safety” video was created as a resource to start positive and constructive conversations by encouraging discussion rather than lecture, and helps parents responsibly demystify the subject of guns.

“As a mother, I know full well how challenging this conversation can be,” Golob said. “It’s crucial that parents set an example and teach their kids about firearm safety so children don’t learn about guns solely from what their friends say or what they see on video games and TV.”

The video features Golob expressing the importance of adults having gun safety discussions with young people, emphasizing that education on responsible safety and storage is the number one way to prevent firearm accidents in the home. The video has two sections, one for talking with younger children, the other for talking to older kids and teens.

“How to Talk to Your Kids about Gun Safety” is available-and shareable-online at http://www.projectchildsafe.org and on the NSSF YouTube page. NSSF is also promoting the video with its members, law enforcement partners, local communities, conservation groups and other supporters, starting with a national launch in partnership with Sportsman’s Warehouse, which streamed the video in all of its stores across the country.

“Talking to kids about gun safety is not something to be put off or ignored-it’s an essential part of responsible gun ownership,” Sanetti added. “This video supports our industry’s “Own It? Respect It. Secure It” initiative, and we hope firearms owners everywhere watch it and share it with their communities.”

The video expands Project ChildSafe’s safety education resources that encourage safe firearms handling and secure storage by gun owners and their families. The video complements such program resources as the Safe Storage Options Infographic and the Parent-Child Safety Pledge. Since 1999, Project ChildSafe has worked with more than 15,000 law enforcement departments throughout the United States to distribute educational resources and free firearm safety kits, which include a gun lock, to their communities. To date, the program has given away more than 36 million safety kits and gun locks in all fifty states and the five U.S. territories.

About NSSF
The National Shooting Sports Foundation is the trade association for the firearms industry. Its mission is to promote, protect and preserve hunting and the shooting sports. Formed in 1961, NSSF has a membership of more than 11,000 manufacturers, distributors, firearms retailers, shooting ranges, sportsmen’s organizations and publishers. For more information, visit http://www.nssf.org. 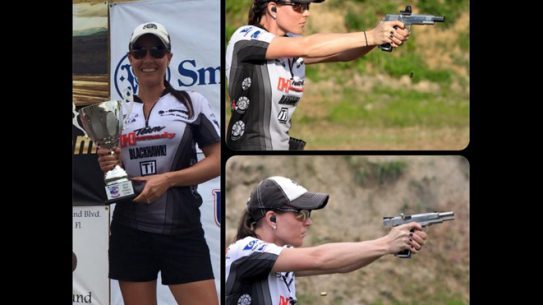 Duff overtook the competition in three divisions with first-place wins in: Ladies .22 Open...