Revolver Vs. Auto: Which Model Fits Your Concealed Carry Needs?

Revolvers and autos, like these from the S&W Bodyguard series, have subtly different concealed carry attributes.

You open a gun magazine and see an article titled “Revolver Vs. Auto,” and you say to yourself, “What the heck? Is this the retro issue?” No, it’s an old debate examined from a new angle.

Let’s assume you’ve already sorted out reliability, firepower in terms of capacity and reloading speed, ability to function at “muzzle press contact distance” and relative individual familiarity with each platform. What we’ll look at now is the adaptability of each type of handgun to concealed carry.

Picking a concealed-carry gun is not quite the same as picking a concealed-carry garment. With clothing, move your arms to check range-of-movement issues if it’s an upper body garment. Walk around a little, make sure the fit is right if you’re buying pants that will be going with an inside-the-waistband (IWB) holster, and confirm that the belt loops will mate well with the holster’s attachment loops.

With the gun there’s more. Most clothes don’t have sharp edges that bite you when you’re in certain postures, but a handgun just might depending on how it’s shaped. How quickly can you access the gun? There are subtle elements to be considered, elements that don’t really occur to most people until they practice a lot and, in my case, teach a lot. And, of course, it’s going to depend a lot on where the gun is carried.

The strong-side hip seems to be the most popular gun location for off-duty/plainclothes law enforcement and armed citizens alike. Assuming the revolver and the auto “fit the same footprint” in overall measurement—length being measured from the rearmost point on the handgun to its muzzle, and height measured from the lowest point of the loaded handgun’s butt to the top edge of its rear sight—the shapes are going to be slightly different.

In more than 55 years of concealed-carry experience, the gun on my hip has most often been a full-sized semi-automatic pistol (starting with the Colt Government Model .45 and later encompassing full-sized Glocks as well as a lot of 4-inch-barreled, square-butt service revolvers thrown in). I also spent time with more compact revolvers and autos. I found that with less than ideal holsters, the auto would often bulge more: The weight of the loaded magazine in its grip frame would drag it out a bit farther from the body. However, with a good concealed-carry holster—an outside-the-waistband (OWB) holster with belt loops fore and aft instead of centered, or an IWB holster—the flatter profile of the semi-auto came into its own, and made it more discreetly concealable. 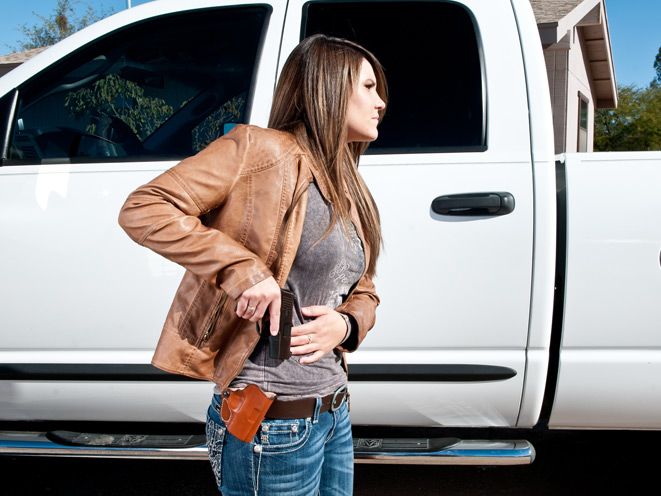 The main “bulge points” that compromise concealed carry with a revolver are found in two obvious places: the cylinder and the butt area. You can’t change the cylinder’s dimensions, of course, but the revolver gives you more options for changing its grip profile than does the autoloader. Let’s say your six-shooter is a K-Frame Smith & Wesson. Put on a pair of Craig Spegel Boot Grips, which stop at the bottom of the frame and taper smoothly down to that point, and your square-butt, full-sized service revolver conceals as well as many small-frame .38 snubbies. You can’t achieve the same effect with a full-sized service auto without major “gunsmith surgery,” and even then you’ll be losing cartridge capacity. Score a point for the revolver there.

RELATED: The Best Ways To Carry Backup Ammo For Your Wheelgun

Another factor to consider is grip shape. You can’t do the old fashioned “scoop draw” in most forms of concealed carry, because the concealing garment is in the way. So, with a hip holster (and, of course, with an ankle holster and some other forms of concealed carry) the drawing hand has to come down onto the backstrap of the handgun’s grip frame. Because the revolver’s gripping surface is more rounded than that of the necessarily rectangular-handled auto, it is slightly faster for the hand to achieve drawing grasp and begin to extract the firearm from the holster.

Current fashions, including Dockers-style pleated sports slacks, relaxed-fit jeans and cargo pants, have coupled with today’s smaller “fighting caliber” handguns to make pocket carry hugely popular. Which type of handgun to carry there? Each has its own strengths and weaknesses in that regard.

There’s no question that, size for size, the auto can conceal a bit better in the pocket. It’s flatter. It doesn’t have a bulging cylinder. The outside of that cylinder bulges and, depending on the nature of the pocket holster and the pants, the inner side of that cylinder can make itself felt against the thigh. Taurus has received much publicity for its new Curve pistol, a subcompact .380 ACP so named because its left side is somewhat convex. Whether worn snugly inside the waistband or, in this case, against the right thigh, this can absolutely aid comfort and, to some extent, concealment.

However, that’s the carrying element. If that carry gun is ever needed for its intended purpose—rapid, effective deployment against a deadly threat—we have to consider the drawing element, and that tends to favor the small revolver.

The reason for the revolver’s advantage in pocket draw is two-fold. We’ve already discussed one element, the rounded shape of the revolver’s grip. One side of the pocket-carry handgun is pressed rather tightly against the thigh and, on the other side, against the fabric of the garment containing the pocket. The fingers of the drawing hand have to find their way past both sides. When a flat-sided auto is tight against the thigh (all the more so in a snug pocket, as in most jeans), the fingertips practically have to claw their way into drawing position. The hand takes its drawing grasp a little more quickly when those fingertips can slide into position along the rounder shape of the revolver’s grip frame.

The other element is the shape of the part of the pocket-carried handgun that sits above the web of the shooter’s hand. A striker-fired semi-auto has most of the rear of its slide located there, but in a revolver that doesn’t have a hammer spur, there’s nothing there to snag in a pocket and slow down the draw.

There’s one more factor that ties in with the latter, and again it favors the revolver when drawing from a side trouser pocket. If we take a firing hold inside the pocket, the way we would with a hip holster just before the draw, our hand profile is so wide that the thumb can snag a little bit coming out. With a revolver, you just put your thumb where the hammer spur would be, and if your revolver has a hammer spur, put the thumb there: The thumb will be a human hammer shroud that prevents the spur from snagging. In any case, you have thinned down your hand profile enough to dramatically speed the draw. Putting the thumb in the “fast from the pocket” draw position doesn’t work nearly as well with any but the tiniest autos, because it forces the thumb awkwardly back and weakens the hold as you draw.

This is why so many of us who prefer to carry an auto as the primary gun on our hip have, after timed testing, gone back to a small revolver for backup in the pocket. The simple explanation is, five shots from a revolver right now beat 10 shots from a semi-auto a second later than right now.

If you’ve ever worn an ankle holster for any length of time, you know how quickly it gets covered with a fine layer of dust and grit. You see the same, to a lesser extent, with pocket carry. Many small, finely fitted autoloaders do not tolerate that dusty environment well, and can jam once the shooting starts if not cleaned very frequently. This does not seem to occur with quality double-action revolvers. In fairness, some small semi-autos built to modern standards of reliability will survive the ankle holster environment, too—the baby Glocks, the little Kahr pistols and the Kel-Tec P-3AT and Ruger LCR come to mind. Generically, though, ankle carry still favors the revolver. With the gun tight against the calf that rounded grip frame comes into play again, and it can make the revolver slightly faster to clear. Note that gun expert Tom Givens, who carries a sixteen-shot Glock 35 in .40 inside the waistband as his primary concealed sidearm, prefers a 2-inch-barreled Colt .38 Special revolver as the backup in his ankle holster.

It is possible to fire through a coat pocket, or through a purse or a briefcase with a hidden gun compartment, without the gun being revealed to a homicidal opponent before the shot goes off. Because the gun is enshrouded by fabric, leather or whatever in those situations, an autoloader’s slide may be blocked (or, more likely, its ejection port), jamming the gun. In that situation, a revolver, particularly one with enclosed hammer so fabric can’t get between the hammer and frame, will shoot until it’s empty. It’s an unusual situation, but if and when it comes up, then it’s advantage: revolver!

What might be called “shape issues” in deep-concealment locations such as pocket or ankle carry can sometimes favor revolvers over autos. There are, of course, many other issues in the revolver-versus-auto choice.