Harness the awesome power of the .50 Action Express with Magnum Research’s newest Mark XIX Desert Eagle, a desert-inspired beast with a 7+1 capacity.

Make no mistake about it, the Desert Eagle is a serious gun! With its hand-filling girth and 4.75-pound, solid-steel heft, the precision-engineered pistol possesses power and accuracy not normally associated with handguns. There are very few guns that are as iconic as Magnum Research’s massive Desert Eagle. It is a gun that is instantly recognizable and symbolic of American ingenuity and brute force. 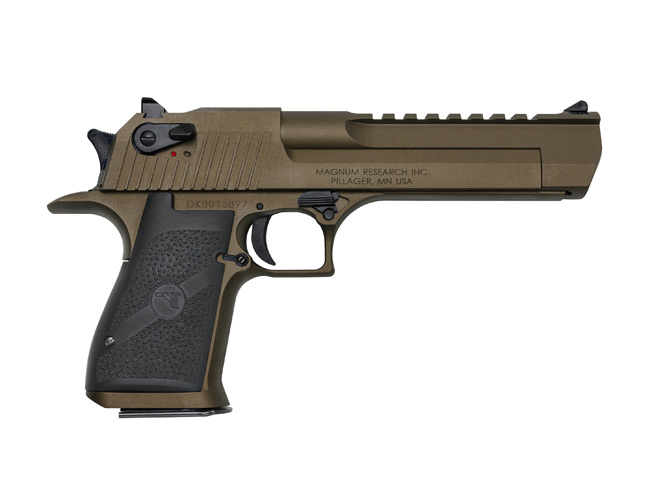 It’s hard to believe, but Magnum Research is in its 29th year of production with the Desert Eagle! In 1979, Magnum Researcher’s founders, Jim Skildum and John Risdall, started the long and arduous process of transforming blueprints into a working masterpiece. Full-fledged production of the gun started in 1985, with pistols being manufactured in Israel by Israel Military Industries (IMI) until 1995, when MRI relocated manufacturing to Saco Defense in Maine. In 1998, MRI moved its manufacturing back to IMI, which had been reorganized as Israel Weapons Industries (IWI). In 2009, MRI started manufacturing the Desert Eagle at its Pillager, Minnesota factory. In 2010, Kahr Arms bought Magnum Research, and the guns are currently being produced at the Pillager plant and are sometimes supplemented by IWI guns to keep up with demand.

My test sample of Magnum Research’s Desert Eagle Mark XIX chambered for the powerful .50 AE sports a highly popular burnt bronze Cerakote finish. While the Desert Eagle uses several design innovations for reliable function, some of these design attributes were not unknown in the world of firearms. A short-stroke piston, not unlike that used in the M1 Carbine, is used. Gas passes through a hole underneath the bore and into the gas cylinder, where it pushes the piston rearward. The piston hits the slide and imparts enough inertia to drive the slide back to where the bolt unlocks (after the pressure subsides) and the extraction, ejection and feeding cycles begin. Twin recoil springs slow the slide’s rearward movement and then push it forward so the slide can pick up the next round from the magazine and chamber it.

MRI’s Desert Eagle uses a rotating bolt lockup that is reminiscent of the AR-15/M16 family of weapons. The bolt head locks into the barrel extension to provide a solid lockup at the moment of cartridge ignition. Once the bullet has left the barrel and the pressure has dropped, the bolt unlocks to cycle the action. It is a hearty system developed to handle the powerful cartridges.

There are a number of factors that contribute to the Desert Eagle’s legendary accuracy. First and foremost is the fixed barrel design. Unlike a 1911, the barrel does not drop to unlock. Some of the most accurate target guns in the world utilize fixed barrels, the Desert Eagle being one of them. Also aiding in accuracy is the polygonal rifling MRI specifies for this pistol. There are a number of benefits to this type of rifling aside from improved accuracy; greater barrel life is claimed, as is increased velocity since it is easier for the bullet to get a better gas seal. Polygonal barrels are also much easier to clean. Most residue is removed with a patch with little scrubbing needed since there are no sharp edges to gouge bullet jackets or deform the projectile in any way. MRI machines the top of the barrel with a Weaver rail for attaching optics to optimize the gun’s accuracy potential.

A good trigger doesn’t necessarily contribute to the gun’s mechanical accuracy, but it sure does make it easier to shoot the pistol more accurately. Although single action (SA) in design, the Desert Eagle’s trigger has a decidedly two-stage feel to it. The first stage is all take-up until you get to a point of increased resistance. The trigger’s take-up on my test sample was only about 0.125 inches. The second stage broke crisply at approximately 3.75 pounds. MRI calls its trigger the Adjustable Trigger Mechanism (ATM). The location of the transition between stages may be adjusted to be at any point within the trigger travel. ATM adjustments are made by inserting a screwdriver through the magazine housing opening.

Desert Eagles have a slide-mounted manual thumb safety, and while the gun can be carried with a round in the chamber, with the hammer cocked and safety applied, the gun’s manual recommends carrying the gun with an empty chamber. I found it difficult, even with my large hands, to disengage the thumb safety while maintaining a firing grip. At the range, I used my support hand to apply and disengage the safety.

I guess it was only fitting that I received a Desert Eagle XIX to test when winds were at record peaks here in the desert Southwest. With a 20-mph crosswind and gusts blustering to 45 mph, not only were my chronograph and target stand blown over, but the winds forced fine desert sand into every crevice of the mighty .50 AE Desert Eagle.

After watching my chronograph crash into the sand five or six times, I finally managed to get good readings with the two loads I had available for testing. I lost track of the number of times I had started firing a group only to have my target stand blow over or, worse yet, my target rip itself from the frame and blow merrily downrange and beyond.

I have a technique where I hold the gun and concentrate on sight picture while I increasingly add pressure to the trigger, letting the gun almost recoil freely until it settles back in the Millett Benchmaster I use for support. There haven’t been many quality 1911s over the years that I haven’t been able to print at least one sub-inch group at 25 yards with this technique. But this technique wasn’t going to work for the Magnum Research Desert Eagle.

At first I tried using muscle and isometric pressure, but this caused too much trembling to be of use. Groups strung vertically. I finally refined my hold by pushing into the gun, leaning as far forward as possible and locking my wrist and elbow so my shoulder would bear the brunt of the recoil. I used my support hand to apply pressure to the front of my right hand. By now I had expended a considerable amount of ammo; between the chronograph’s misreads and targets blowing away, I had not yet produced a group that I thought was indicative of this precision cannon’s accuracy. Without sounding wimpy, I had to remind myself that the .50 AE cartridge was generating roughly four times the energy of a hot .45 ACP defense round, so I had to cut myself a little slack. My final few groups tightened considerably. 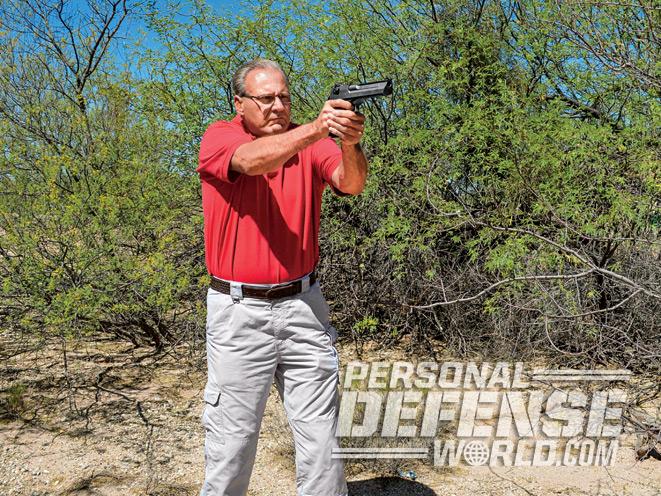 The best group of the day measured just 1.30 inches from center to center for a five-shot group with Hornady’s 300-grain XTP bullets. MRI’s 300-grain round produced a group just slightly bigger, at 1.57 inches.

I’m sure the gun is far more accurate than I was able to shoot it, and as my range session progressed I found myself flinching less and less. One thing that helped was the Desert Eagle’s crisp SA trigger, breaking with just 3.75 pounds of pressure. Its crispness and light weight made the gun’s impressive roar predictable, and this aided me in concentrating on sight alignment while adding the pressure needed to break the shot. Once I concentrated on locking my wrist and elbow, the mighty Desert Eagle was not snapping my wrist painfully. Without the sharp pain, the gun became much more pleasant to shoot.

In the first two magazines of ammo I had a couple instances where the slide did not go fully into battery. Using my thumb, I could easily seat the slide with little pressure. After 21 rounds, the problem resolved itself. The pistol was shipped to me dry, without lubrication, and I can only presume this was done to prevent any dark spots on the beautiful burnt bronze Cerakote finish. In any event, the rough spots must have worked themselves out because I didn’t have any stoppages after that. I’m certain that if I had lubricated the Desert Eagle prior to my range session I would not have had any issues. In all, I fired 65 rounds during my range session with the Desert Eagle, and I felt as though I had done a good day’s work!

Last year, I had the opportunity to evaluate a Desert Eagle chambered in .44 Magnum. I would have guessed this to be MRI’s most popular gun, but I was wrong. In a recent phone interview with Kahr Firearms Group Vice President of Sales And Marketing Frank Harris, I found out that the .50 AE is MRI’s top selling Desert Eagle. “It seems like the Desert Eagle’s appeal is its big bore and the largest percentage of buyers go right to the biggest chambering: the .50 AE.” Harris went on to tell me that the typical buyer was a collector, a person fascinated with the Desert Eagle’s design and power. Other buyers live in or hunt in areas with bear or big game where the gun would be effective.

One of the great design features of the Desert Eagle is its ability to change calibers and barrels. The .44 Magnum and .50 AE share the same bolt. If you own a Desert Eagle pistol in either caliber and want to switch to .357 Magnum, you’ll need to buy another bolt—MRI sells complete packages—along with the barrel and magazine. Purchase one pistol and you have the ability to build two other configurations.

The appeal of the Desert Eagle is undeniable! Built from the finest carbon steel available and precision engineered, it embodies American ingenuity and craftsmanship. You don’t have to live in bear country to want to own a Desert Eagle. The allure and mystique, not to mention its raw power and accuracy, are reason enough to want to add this beast to your collection! My test sample Desert Eagle Mark XIX, with its burnt bronze Cerakote finish, was extremely attractive and reliable on the range. If this is the gun of your dreams have your firearms retailer order it for you, and don’t delay because production is limited.

For more information on the Desert Eagle Mark XIX, visit http://www.magnumresearch.com or call 508-635-4273.