The striker-fired Diamondback DB380 packs 6+1 rounds of .380 ACP ammo in a tank-tough package.

The Diamondback Firearms Company of Cocoa, Florida, offers a line of subcompact .380 ACP pistols that would be very suitable for concealed carry by licensed civilians and police officers who need a small, lightweight, concealable pistol for backup or off-duty carry—the Diamondback DB380 series.

The DB380 uses a glass-reinforced polymer frame, which means the pistol tips the scales at a mere 8.8 ounces and is only 0.75 inches wide. The slide is machined from 4140 steel and has a matte blue finish that protects it from wear and environmental extremes, while a generously sized ejection port and large extractor ensure that fired cases get out of the way reliably. The slide reciprocates on four chrome-moly steel rails, two on the cam block and a pair on the rear frame rail. The magazine catch and trigger are also constructed from chrome-moly steel and have a black-oxide finish, while the other parts of the trigger mechanism are Melonite-treated for increased durability. 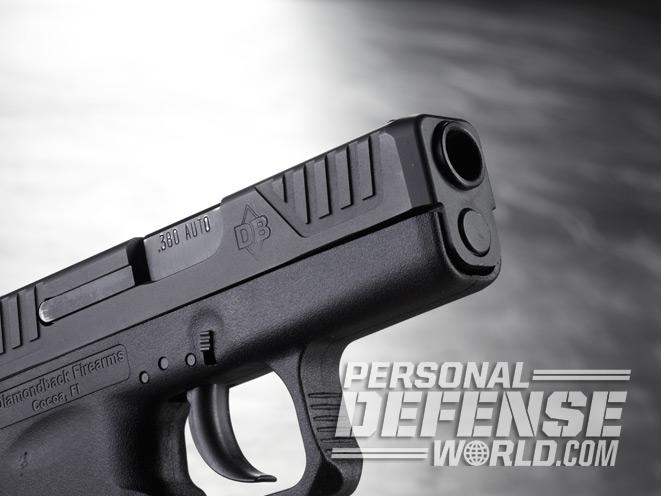 While in the past most .380 ACP pistols were blowback designs, the DB380 uses a variation of the Browning locking system in which the hood of the barrel chamber moves up into (and bears against) the front edge of the ejection port. Using a locked breech allows the pistol to be lighter in weight and helps reduce the felt recoil. The latter is also softened somewhat by the polymer frame flexing some of the recoil pulse. In keeping with its intended role in life as a close-range, defensive handgun, the DB380 uses a double-action-only (DAO) trigger, which Diamondback refers to as the “Zero-Energy” striker firing system. Unlike many of this breed of pistols, the action of the slide does not partially cock, or pre-load, the striker. Instead, when the trigger is pulled, dual trigger bars retract the striker completely before tripping the sear to release it and fire a cartridge.

The pistol’s six-round magazine has a finger-rest baseplate that allows a two-finger grip on the little pistol, which improves handling and recoil control to a marked degree. The magazine release is located in the “proper” position (I really dislike those heel-mounted magazine releases!) although the magazine did not fall free when the release was depressed. But considering the pistol’s role in life, I don’t really see this as problematic. 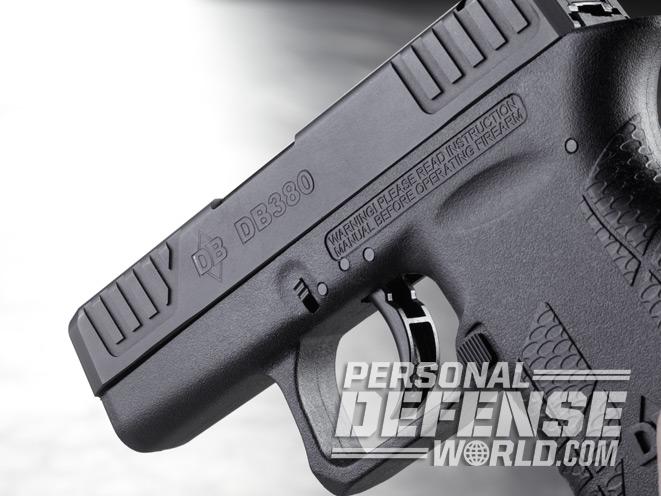 The only controls are the magazine release and trigger, and the former projects only slightly from the frame. This gives the pistol a smooth, snag-free exterior that will not hang up when drawn from concealment, exactly what you want on a pistol that is going to be carried concealed.

The shape of the grip, with its moderate tang, allows the shooter to get a high grip that places the hand close in line with the barrel axis. Combined with the impressed texturing on front- and backstraps, the shooter can get a secure purchase, which helps when it comes to recoil control and faster follow-up shots. 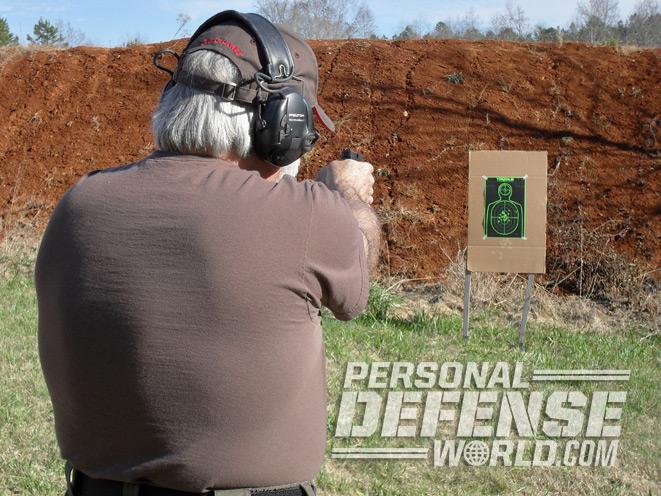 In testing the Diamondback DB380, I found it had a chunky, squared-off profile, but I was impressed right away by its excellent ergonomics. The grip fit my hand nicely and the pistol pointed very naturally, a feature that I believe can be vitally important in a handgun used for close-range personal protection.

I assembled a variety of .380 ACP ammo from Remington, Black Hills and Hornady, and headed out to the range accompanied by my fiancé and photographer, Becky. While I feel that trying to shoot little groups on a bullseye target with this class of pistol can often be an exercise in futility, out of curiosity I fired at three targets with each brand of ammo from an MTM K-Zone rest at 10 yards—and was completely flummoxed. 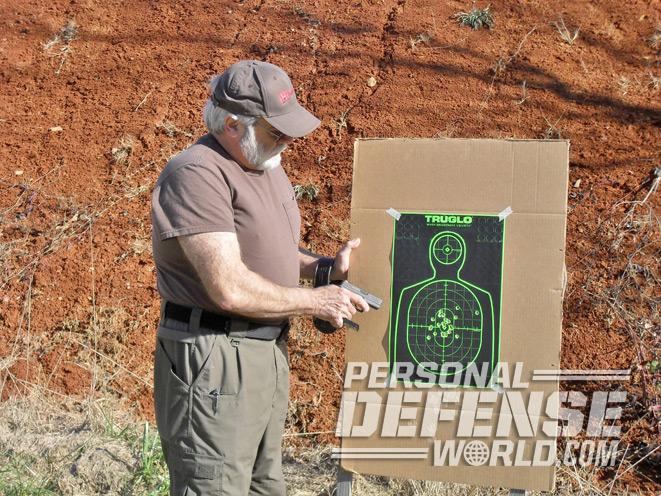 Despite its small size and tiny sights, with ammo it liked (in this case Black Hills 100-grain FMJ), it printed sub-2-inch groups just a bit high and right of point of aim. The other groups ran from just over 2 to 2.75 inches, which I consider a very creditable performance from a subcompact pistol. Early on, I experienced two misfires with the Hornady ammo, but each round went off with a second strike. After that the DB380 ate up everything I stuffed into the magazine and spat out the empty cases with boring regularity.

I then got down to the “real” test. Firing consisted of running a series of off-hand drills on a combat target at distances of 5 and 7 yards. Not having a holster, I began each drill holding the pistol in the “low ready” position. Once again, the DB380’s performance exceeded expectations, and all but one shot (a called flyer) ended up in a pleasingly tight pattern in the center of the target.

I found Diamondback’s DB380 to be a fine little performer and would not hesitate to use it for everyday concealed carry. In fact, I might just do that!