by Stan Trzoniec
in Guns, Rifles
0

This is the new Savage Model 25 Walking Varminter with the Camo stock chambered for the .22 Hornet. Shown equipped with a Meopta 3-9x42mm scope.

“Give me a varmint shooter anytime,” our guide bellowed out as we were embarking on a pronghorn hunt out of Jordan, Montana, a few years back. “They know how to shoot, dupe the wind and are good estimators of distance,” he went on.

Right off the bat, I felt comfortable with this veteran hunter. He was all dressed up in his western garb, including a weather-beaten Stetson and jeans that looked like they were this side of a decade old. As he sat straight up in his Ford F150, we moved out to look for a trophy pronghorn, and in the late afternoon we bagged a nice one with nearly trophy horns. Not exactly what I was looking for, but heck, there is always a next time.

I’ve been a small-game hunter since childhood, so when Savage Arms announced yet another version of its popular Model 25, I was knocking on the company’s door. It’s obvious that Savage knows the value of the varmint hunters out there, as this new addition brings the Varmint series to a total of 10 models with a dozen different chamberings, some of which even allow a choice between various twist rates.

First and foremost is that any varmint gun by any name should have a great trigger, and it’s interesting to note that all of the Savage varmint rigs have its famous AccuTrigger. Consumer adjustable, AccuTriggers are now the benchmark among serious small-game hunters looking for a well-equipped varmint rifle. In the lineup, Savage seems to cater to all, starting with the very unique Model 12 LRPV, which is chambered for a half-dozen cartridges, from the .204 Ruger to the impressive 6mm Norma BR. Cradled in an H-S Precision stock, the gun has a right-hand bolt knob with a left-hand ejection port. From here, the Model 12 line continues with the BTCSS, Varminter Low Profile and the BVSS—all with minor changes in the laminated woodwork. If you like your guns to be “all weather,” the Model 12 continues with the FCV, the FV and the Model 12 FLV for left-handed shooters, which are all nestled in synthetic stocks.

However, the guns that pique my interest are in the Model 25 series. They are very handy in the field and presently come in synthetic, synthetic camo and in laminated versions with both thumbhole and traditional stock features. Because of their stature, the chamberings relate to their size and include the .204 Ruger, .17 Hornet, .22 Hornet, .222 Rem and the .223 Rem with a 1-in-9-inch twist. Naturally, all Model 25s are equipped with the AccuTrigger, a detachable magazine and Weaver-style scope bases.

The most recent addition to this line is the Model 25 Walking Varminter Camo with a Realtree Extra pattern. Nicely designed, the comb on the rear of the stock is high, which is perfect for prone shooting in the field. The pattern is well-executed throughout the stock, and for field use, there are three depressions on the pistol grip that, combined with the finger grooves in the forearm, place the gun in a shooting position seemingly as fast as you pick up the gun.

For the walking small-game hunter, this gun is perfect. Starting at the forend, the stock tapers to the rear with only about a quarter-inch of width from the front of the gun to the pistol grip. The medium-contour barrel is free-floated to the receiver, where it is pillar-bedded for the best in accuracy potentials. To keep the weight down, the “bottom metal” has been designed and finalized in polymer and includes the magazine, triggerguard and all the related parts around it. The pistol grip has been slimmed down and finishes off with a pistol grip cap incorporating the Savage logo for protection on this part of the stock.

The butt of the gun is conducive to comfort in the field, as mentioned with its higher, straighter comb, which makes shooting the gun from the bench, off-hand or prone a joy. The only thing that I took note of was that when cocking the gun, in some instances the bolt will hit the top of the stock. No problem here, and no cause for concern, as it does not hinder the operation of the gun, and when the bolt does contact the stock, it hits the rounded part of the comb and rides up and over this. For the benefit of all the hunters out there, no cheekpiece has been incorporated into the stock, allowing both right- and left-handed varmint hunters to use the gun. This kind of versatility is also stressed with the flutes on each side of the gun, which are more than generous even for gloved hands.

All around the barrel, receiver, bottom metal and the recoil pad, the stock is inletted to surgical precision thanks to high-tech CNC machines now in use. The stock is level with the ejection port for a streamlined look, but in order to keep the stock as slim as possible, the floorplate has been installed “proud” yet tapers down and into the stock at the triggerguard. Most unusual is the recoil pad, new in design and a radical departure from others in the line. Rather than being solid, it has a profile usually associated with benchrest rifles and is ventilated for more cushioning. Not that you need recoil protection on the likes of a .17 or .22 Hornet, but shooting one of the .223s for hours at time, this could add to the enjoyment of the shoot over the long run. Still another advantage, due to its softness, when you have to open the gate to the next pasture and lean the gun against the fence, the gun will have less of a tendency to slip on the ground than those with more solid pads.

The Model 25 is an offshoot of the Model 40 except that it has a three-lug locking system versus the rimfire-type action of the Model 40. With the Model 25, engineers now had the gun that could chamber the high-steppers like the .223 Rem and .204 Ruger complete with a 60-degree bolt lift. This not only makes the gun fast to operate, but also allows the use of larger objective lens scopes to be mounted on the gun. With my sample, I mounted a Meopta 3-9x42mm MeoPro scope in a set of aluminum rings that mated perfectly with the factory-installed bases, not to mention matching the overall color and texture of the gun. Operating the bolt is straightforward. It’s smooth to the touch and factory jeweled for appearances. By any standards, it is a long bolt, measuring just shy of 8 inches in overall length.

The bolt diameter is 0.635 inches and is considered a “fat bolt,” as it keeps this measurement from bolt face to shroud. It is highly machined, with a clip-type extractor and pin ejector located within the bolt face. Behind the locking lugs, there is a spring arrangement that allows a bit of cushion to fill out the chamber as the bolt is pushed forward and into the breech. The bolt knob is uncheckered, and the bolt itself has a slight rearward angle to it, low enough to clear the larger eyepiece of the MeoPro scope. To remove the bolt for maintenance or travel, move the bolt to the rear, pull the trigger to its rearmost position and pull the bolt out of the receiver.

Right behind the bolt handle is the safety. It has two positions, with the forward position ready to fire and the rear being safe. The trigger, right out of the box, registered 3 pounds without a hint of slack in the process. When I get closer to woodchuck season, I will adjust it down slightly—something around 2.5 pounds is perfect for field use. The receiver, as is the barrel, has a matte finish, and with the barrel sleeved into the receiver, makes for a very streamlined action. Like others in the Savage stable, the Walking Varminter’s barrel is 22 inches long and has a 0.710-inch diameter at the target-crowned muzzle. The magazine is detachable, holds four rounds and is compact enough to fit nicely in one’s pocket as extra shooting opportunities arise. Loading the magazine was very smooth, as was the feeding of all rounds into the chamber.

Because the gun is new and few were available for testing, I was sent a .22 Hornet model for testing. No matter, I like the Hornet; it is easy on the shoulder, flies true, and if you want, can be handloaded to sub-MOA groups at 100 yards. 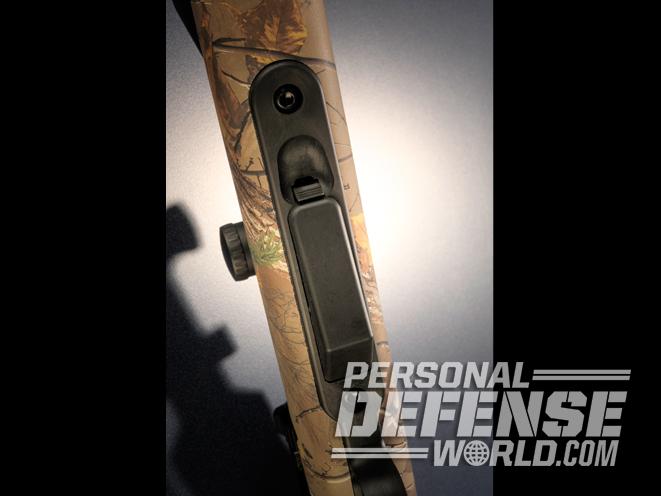 From early beginnings in 1893, a shooter/writer named Reuben Harwood from Massachusetts developed the original Hornet with a mixed duplex payload of DuPont No.1 rifle smokeless power and FFG powder under a 48-grain bullet for a velocity of around 1,900 fps. A year later, Reuben made up yet another combination of DuPont No. 2 rifle and FFG topped off for the second time with a 48-grain bullet for around 2,000 fps. Still later, Townsend Whelen, Al Woodworth, and G.L. Wotkyns (with some help from the employees at the Ordnance Department) brought the Hornet to a better life by improving on the original .22-13-14 WCF cartridge.

The first commercial application of the Hornet was in 1932 when Winchester took it under its wing by not only offering the ammunition but a Model 54 and Model 70 chambered for this cartridge. Savage thought so much of this diminutive round that the company chambered it in its Sporter model with both a lightweight and target-weight barrel. Wildcatters like myself love to tinker with cartridges like the Hornet, so the .22 K-Hornet was introduced, and with an improved case profile and a shorter neck, it offers better downrange performance with just a few more grains of powder. Aside from this, it is the perfect first-time wildcatting experience, as the K-Hornet offers a bit more velocity with a case more suitable to repeated handloads. Today, the Hornet is enjoying a bit of a renaissance, with more and more rifle manufacturers offering it in their lineups of small- to medium-game rifles. With the weather in New England not quite up to snuff for exacting shooting, a call to Ed Hall seemed to solve all my problems. He is only a short distance from me and has a dedicated backroom at his house where he can shoot out the window downrange. Complete with a chronograph and heat, I had it made. Using three kinds of factory ammunition, we sighted in and off we went.

The testing went smoothly, but the groups are a little less than I expected from a varmint rifle. This could be because of the colder weather (mid-30s), a gusty wind from the left and a snow shower here and there. At 100 yards with those conditions, anything can happen to accuracy, especially when shooting light 35- to 46-grain bullets. I have shot much better groups from other Savage rifles of the same ilk, and with the warmer weather coming up, handloads may be the way to go. In any event, and considering the conditions, I’m happy with this Savage. It handles nice, the trigger is great and since my friend Ed likes it, we are in!