The Model 442 Moon Clip is very versatile and can perform accurately with or without the moon clip. The result is a powerful, capable and compact wheelgun.

I’m a die-hard fan of the small J-Frame Smith & Wesson revolvers, so when I discovered this new Model 442 variant I had to check it out. It is different from your standard Model 442 in a couple of ways. First off, it’s called the Model 442 Moon Clip. The full-moon clip, or moon clip for short, has been very popular with competitive revolver shooters, as it makes for a quick reload. It’s not as bulky as a speedloader for carrying extra ammunition and has no working parts to malfunction or break.

S&W mated this moon-clip concept with a Model 442-1 in .38 Special +P. The back portion of the cylinder was machined out to give some extra room for the thin stainless steel clip that holds five cartridges. They are held in place using the extraction groove located just ahead of the rim on the cartridge. A plus is the fact that the revolver will still work with loose rounds and can be reloaded using one of the more conventional devices if desired, with no adverse effect on function or accuracy. 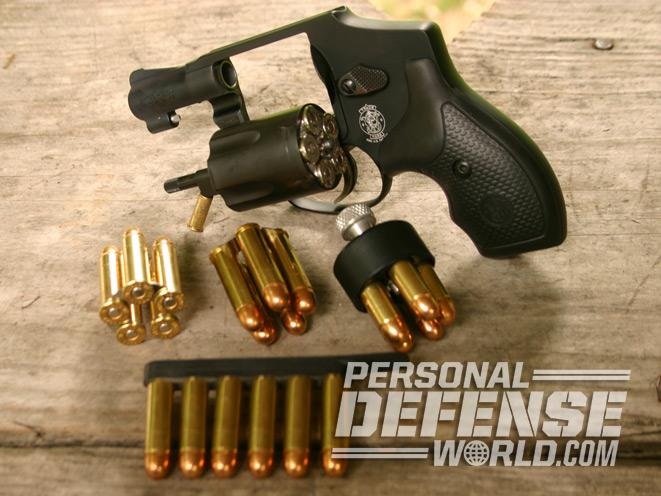 The revolver itself has a 1.88-inch barrel with five-groove, right-hand-twist rifling. It will take any modern .38 Special load, from mid-range wadcutter target ammo up to +P JHP cartridges that are optimal for defense use. It has a double-action (DA) firing mechanism, but due to its internal hammer, it cannot be manually cocked. Its 0.12-inch-wide, ramp-type front sight is serrated to reduce glare and sits atop a narrow barrel rib. The fixed rear sight consists of a square notch machined into the rear of the topstrap with a channel running out almost to the barrel.

The aluminum alloy frame gives it an empty weight of 15 ounces, and it has an overall length of 6.31 inches and a height of 4.24 inches. It has a round-butt grip frame and black, two-piece rubber grips with finger grooves and stippled panels. The finish is a business-like matte black except for the extractor star and the color-casehardened trigger. 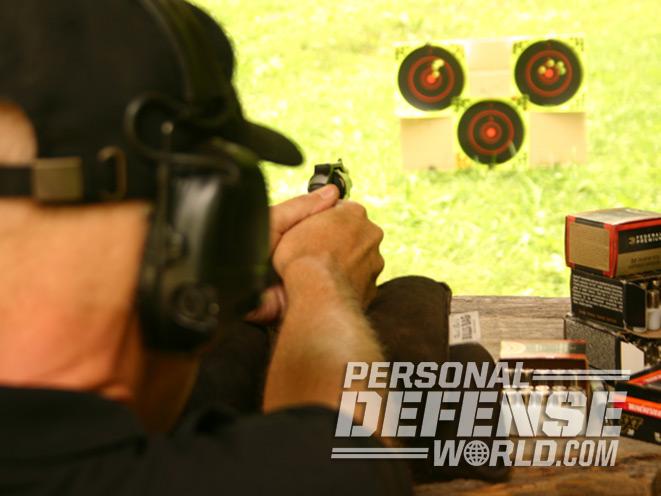 At the range I started by setting up my Oehler Model 35P chronograph to get some velocity measurements from the short-barreled Model 442 Moon Clip so as to compare them with factory specifications. Factory muzzle velocity specifications for the Federal NyClad are stated as 830 feet per second (fps), while the Speer cartridge lists 860 fps, and the Winchester round shows a 908 fps listing. You can see the velocity figures I obtained in the accompanying table. Two were lower and one was actually higher, but all in all I was pretty impressed, considering the little revolver’s sub-2-inch barrel and barrel-cylinder gap.

I tested the revolver’s accuracy from a bench using a sandbag rest at 7 yards, owing to the short sight radius and DAO trigger. The 1.88-inch barrel is inherently as accurate as a longer barrel, but the reduced sight radius and small fixed sights make it a little more difficult to accurately fire this type of handgun. That being said, the Model 442 was quite accurate, with one particular five-shot group having four hits in a cluster that measured 0.63 inches until a flyer opened it up to 2.27 inches. The best five-shot group was produced with the Federal NyClad load, clustering into 1.98 inches. No groups were over 3 inches. 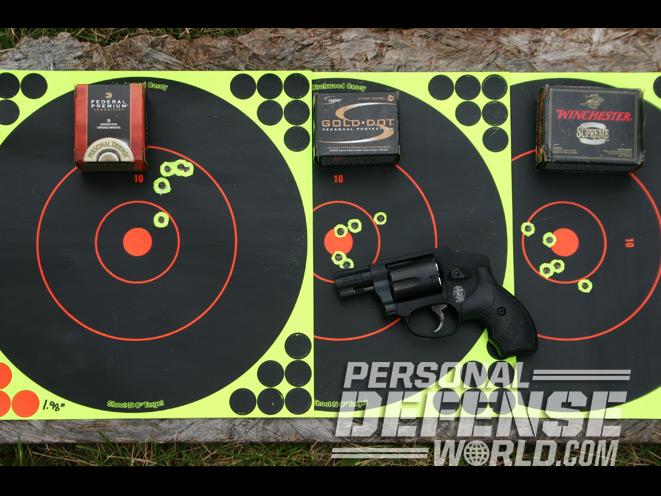 For the combat shooting exercise, I loaded up my moon clips, a speedloader and a quick-strip with a Federal 130-grain FMJ load and set up a silhouette target at 15 yards. I modified the combat qualification course I usually use during tests for the reduced ammo capacity of the Model 442. Shooting was done using a point-shoulder stance using only the strong and then support hand at 3 yards, then back to 7 yards, where I drew and fired two double-taps. Then, on the fifth shot, I did a combat reload with a moon clip and fired once more. For the last four shots, I fired three into center-mass and one to the head. Backing up to 15 yards, I fired from behind a barricade: two shots standing on the left side, two standing from the right side and one kneeling on the right side, for 25 rounds. In short, the J-Frame was up to the task.

Were I in the market today for a small revolver, the Smith & Wesson Model 442 Moon Clip would be on a very short list for consideration. Couple it with a short-barrel .38 Special load and you will have a winning combination.