How To Choose The Right Pocket Pistol For Self-Defense

Today’s state-of-the-art pocket pistols make it easy for you to stay well armed at all times so you can counter a surprise attack.

Recently one of my best friends told me that he had gotten his concealed-carry permit—for the second time. To be clear, he had not renewed his permit, but had gone through the process all over again after letting his first permit lapse. Interestingly, his reasoning for both actions was directly influenced by today’s breed of pocket pistols.

When Matt first got his CCW more than 10 years ago, he was already a very good shot with the full-sized pistols he owned. To his credit, he supplemented his marksmanship skills with tactics training to make sure he was prepared for the responsibility of carrying and potentially using a gun in the real world. He even invested in a custom holster for his chosen carry gun that was fine tuned to his physique and style of dress. However, when he put all the pieces together and began to carry on a daily basis, he discovered what many of us have also learned the hard way: Carrying a full-sized handgun concealed isn’t easy.

The fact that his job required lots of physical movement made that challenge even tougher. Soon his custom holster was joined by an ever-growing collection of other holsters in a never-ending search to find the perfect carry position. Like many shooters, the frustration of this process eventually got the best of him, and he stopped carrying altogether and let his CCW permit lapse. 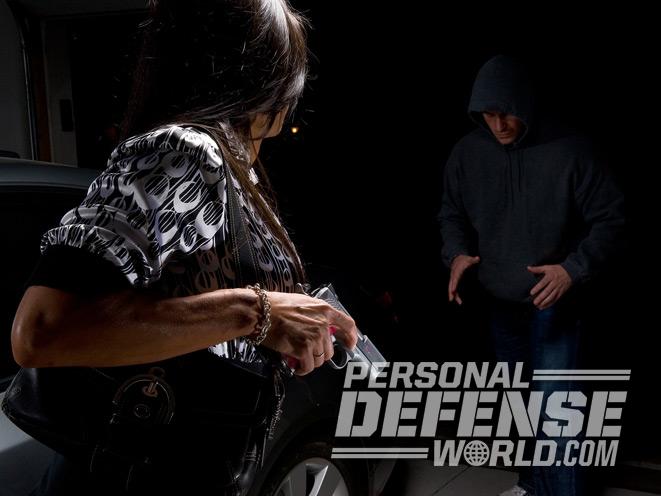 My friend had always been a firm believer in full-sized fighting pistols—especially the 1911 platform. Although he was reluctant to sacrifice ballistic performance for the convenience of a smaller-sized pistol, he couldn’t ignore the fact that the advances in handgun design over the past 10 years have clearly bridged that gap. Today’s pocket pistols are an impressive synthesis of big-bore stopping power and compact size. They were also exactly the tipping point he needed to rekindle his commitment to carrying concealed. After thoroughly researching the market and narrowing his choices, he found a pistol that gives him the performance he demands in a package that comfortably fits his wardrobe, lifestyle and habits.

To his credit, finding the right gun—and later the right holster—was only part of the process. Before he even considered applying for his CCW again, he invested in a pile of ammo and set up a regular schedule of visits to the range. He found that although his new gun carried much easier than his pet 1911, its smaller size made it more challenging to shoot well. That meant more range time before he felt he could shoot the gun well enough to carry it responsibly. Then and only then did he submit the paperwork for his permit.

This path of discovery is an excellent template for anyone considering carrying a pistol for personal defense. First, find a gun that fits you, your style of dress and your lifestyle well enough that you will actually carry it regularly. The modern breed of pocket pistols makes this process very easy, offering an entire spectrum of handguns in shapes, sizes and calibers to fit virtually any preference.

To make your carry gun an integral part of your daily dress and routine, you also need to invest in a good-quality holster that dovetails with your wardrobe and provides consistency as your style of dress changes with the seasons. Here again, the advantages of true pocket pistols shine. Pants pockets are one of the few fashion elements that remain consistent during the change from warm weather shorts to jeans to a suit and tie. As such, they are a natural home for a pocket-sized pistol nestled in an appropriate holster that protects the gun, aids concealment by masking its outline and keeps it oriented in a consistent, easy-to-access position. It’s a good idea to “test drive” your carry position around the house for a while before you begin to carry in public.

The next and most important phase of the process is to shoot your pocket pistol—a lot. Smaller guns are lighter and offer less surface area to grip than full-sized pistols. They also have a shorter sight radius than larger guns and don’t point as naturally. All of these factors make them more challenging to shoot, so you need to invest extra range time to learn to shoot yours well. Make your range sessions challenging, but keep them relevant to the conditions of realistic defensive shooting.

Once you are confident in all the component parts of your pocket pistol carry strategy, put them all together and make the commitment to carry regularly. As you gain experience, continue to refine your personal approach to carry and make it an integral part of your daily life. Above all, keep practicing. Remember, the gun you carry the most should also be the one you shoot the most. Train hard, and stay safe.