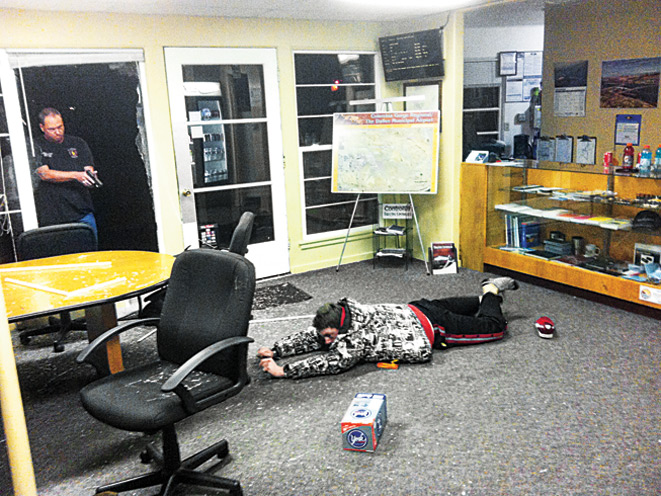 A security guard and a burglar locked eyes last December at a rural airport in southern Washington. Security guard Darren Lacock, armed with a .40-caliber pistol, had just tapped on a window of the terminal building at Columbia Gorge Regional Airport, near Dallesport, Washington, to get the attention of a burglar who was at a counter, stuffing his pockets with candy and soft drinks.

The man was so startled that he flung a box of candy into the air. But Lacock was also taken aback when he saw the man’s expression instantly change from shock to defiant rage.

Lacock’s parents, both former law enforcement officers, taught him about the body language of dangerous people. “If you gauge their facial expressions,” he said, “you can learn what they’re going to do—you know whether it’s going to be fight or flight.” In this incident the burglar seemed ready to fight.

It began in the early-morning hours of December 5, 2014, when the airport manager, who stayed late because of icy weather, heard a loud crash coming from the terminal. The manager called 911 after first alerting Lacock, who handles fuel and other duties for the airport’s fixed-base operator. But Lacock, being a concealed-carry license holder for 24 years, also works security at the airport.

Lacock and the man stared briefly at each other, then the burglar took a step. Lacock prayed he would stop, but took no chances and raised his pistol.

“I told him, ‘You’re about to make a bad choice,’” Lacock said. “His expression changed to ‘Oh, crap, I’m going to die here.’” The suspect stayed on the floor until local sheriff’s deputies took him into custody.

Lacock had reason for caution. The suspect had been jailed earlier on a drug possession charge. He also faced an assault charge for allegedly using a gun to threaten another man. The suspect pleaded guilty to the drug charge and the airport burglary and was sentenced to eight months and ordered to pay for repairs at the airport.

Lacock, also a volunteer firefighter, was relieved the man surrendered. “For what he was taking…it wasn’t worth his life,” Lacock said. “But I made a decision. If he was going to attack me or my boss standing nearby, I was going to fire.”

Tell Us Your Story: Combat Handguns pays $100 for each “It Happened to Me!” letter that we print. Send yours to Combat Handguns, 1115 Broadway, New York, NY, 10010, or e-mail to tactical-life@harris-pub.com. Please include your full name, address, email and phone number (including area code). A signed release is required prior to publication. 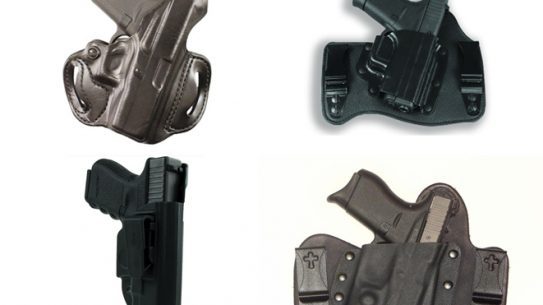 New Holster Options For The GLOCK 43

From Blade-Tech and CrossBreed to DeSantis and Galco, here's a look at some exciting...