At the same size as its smaller-caliber brothers, the BP40CC ups the power with the .40 S&W cartridge.

Workplace violence, terrorist attacks and gang members looking for the thrill of a kill have made the concealed carry of firearms all the more popular with citizens across these United States. Finding the right balance of power, reliability, concealability and cost is a very individual choice. Engineers from all of the major gun companies have designed a multitude of options, offering consumers a range of good quality products from which to choose. The Bersa BP40CC is one of those handguns that may make sense for a lot of people.

Announced in the fall of 2014, the BP40CC is one of three guns in Bersa’s new polymer pistol line. Introduced at the same time was the BP380CC in .380 ACP. The first gun in the series, the 9mm BP9CC, hit the market a few years ago and has been selling very well.

I purchased a BP9CC shortly after they were introduced. I found the gun to be an easy shooting pistol with respectable accuracy. What I most liked about the pistol was that it was thin and easy to conceal, yet it was large enough to wrap my entire hand around it without my pinky falling off. Frankly, it is one of the best fitting concealed-carry pistols for my hand.

Even though I generally prefer the 9mm for concealed carry, I was eager to try the new versions of the pistols when they were announced by Eagle Imports, the U.S. importer of Bersa firearms.

All three guns are the same size externally. At first glance, they all look alike. Other than the engraved model number on the slide, one of the only differences I spotted between the 9mm and .40 S&W guns was a slightly enlarged ejection port. I would expect that any holster or accessory made for existing 9mm pistols will fit the .40 S&W without modification. One of the things that I like about the BP series of pistols is the trigger pull. There is a bit of take-up, but the break is clean and there is no perceptible overtravel. Bersa describes the trigger system as a short-reset double-action-only (DAO) design. I found the resets quick and positive. The trigger pull on the BP40CC is fairly light for a DAO gun. Using a digital Lyman trigger-pull gauge, an average of 10 pulls measured 4.3 pounds.

Bersa mounts three-dot sights on the BP40CC pistol. The front sight is metal while the rear is plastic. The front sight seems brighter and easily catches the eye for fast aiming. The rear sight has a pronounced leading edge that allows it to be used for slide manipulation during one-handed operation. Even though it is plastic, the rear sight seems tough enough to handle this use. However, I would not regularly train with it in this way.

The sights are dovetailed, allowing the owner to make drift adjustments or to replace them altogether. The front sight cut will take Sig Sauer #8 sights while the rear will accept Glock-type sights. Recently, XS Sight Systems introduced its express sight kits for the BP series of pistols. These kits have the properly sized front and rear sights. While I found the stock sights worked well out of the box during testing, I’m happy the famed Big Dot sights from XS are available.

Bersa includes gripping serrations on the rear part of the slide. The serrations are deceptively aggressive. That is to say they look mild in appearance but provide an exceptional gripping surface when manipulating the slide.

The triggerguard is undercut where it connects with the grip. This allows the shooter to get his hand further up the grip and improve recoil management. There are no external safeties on this pistol. However, Bersa does build firing-pin and magazine-disconnect safeties into this gun. Also, there is an internal lock built into the right side of the slide. With one of the included keys, you can disable the gun for storage. For anyone concerned about internal locks, I have put more than 2,000 rounds through three different BP series pistols and have not experienced any problems at all with the lock.

Field-stripping the BP40CC is straightforward. After ensuring the gun is unloaded and decocking the striker mechanism by pulling the trigger, you pull the slide back slightly to align witness marks on the frame and slide. Once the marks are aligned, you push the slide stop lever out of the frame from right to left. When the lever is removed, the slide can be pushed forward and off of the frame. The recoil spring in captive, so you do not need to worry about a spring flying across the room. Assembly is accomplished by reversing the take down order. Bersa also backs the BP40CC with a lifetime service contract.

I was eager to get the BP40CC to the range to see how it would shoot. As I mentioned, I already own a BP9CC and really like that pistol. I was curious to see if the .40-caliber version of the gun would be as reliable.

I admit that I was a touch apprehensive about how much additional recoil would be generated by the higher-pressure cartridge. From a full-sized pistol, the .40 S&W generates a modest amount of recoil that is easily controllable. However, in a small, light gun, the .40 can be a tad much for some people.

I started the test by first running 200 rounds of FMJ ammo through the gun to make sure it was functioning correctly. Having experienced no problems, I ran another 200 rounds of premium hollow-point ammo. In total, I had eight different loads from four different manufacturers represented. All of the ammo ran fine in the Bersa. No malfunctions of any kind.

Recoil wasn’t bad in this gun. Compared to the 9mm and .380 ACP versions of this pistol, the .40 S&W clearly had a much more stout kick. However, it was still very controllable, and most shooters should be able to handle it easily.

As one might expect, some loads are a little harsher than others. Oddly, the Speer Lawman 155-grain TMJ load had the hardest kick by a noticeable margin. I’ve not noticed this load as being any harsher than others when testing other .40 S&W pistols.

By far the lightest recoiling load is the Civil Defense ammo from Liberty Ammunition. That load uses a very light (60-grain) bullet moving at very fast-for-caliber speeds. The Civil Defense ammo recoil was a noticeably softer shooter than the other loads I had on hand.

Accuracy with all of the ammunition was reasonable for self-defense use. Groups tended to run between 2.5 and 4 inches with personal protection loads at 15 yards when shooting unsupported. The best five-shot group was 2.37 inches with the Hornady Critical Duty load. This load had a relatively mild recoil impulse.

Since the BP40CC proved itself reliable on the range, I began carrying it as my CCW gun. As I had hoped, this pistol fit my existing BP9CC holster: the Cloak Tuck 2.0 from Alien Gear. The Cloak Tuck 2.0 is a tuckable inside-the-waistband rig that uses a soft neoprene backer with a molded polymer shell to secure the gun and provide a very comfortable carry experience. In addition to providing a very comfortable carry experience, the Alien Gear rigs are inexpensive, offer a “forever warranty,” 30-day money-back guarantee and are made in the U.S.A.

For me, carrying the BP40CC slightly behind the strong-side hip offered the best combination of comfort, concealment and quick access. Although the Bersa is larger than some of the subcompact pistols on the market, I found that the thinness of the gun combined well with its moderate weight to carry easily during any normal activities. Walking, sitting, doing yard work and washing dishes were all perfectly comfortable—and comforting—with the BP40CC riding in the Alien Gear holster. 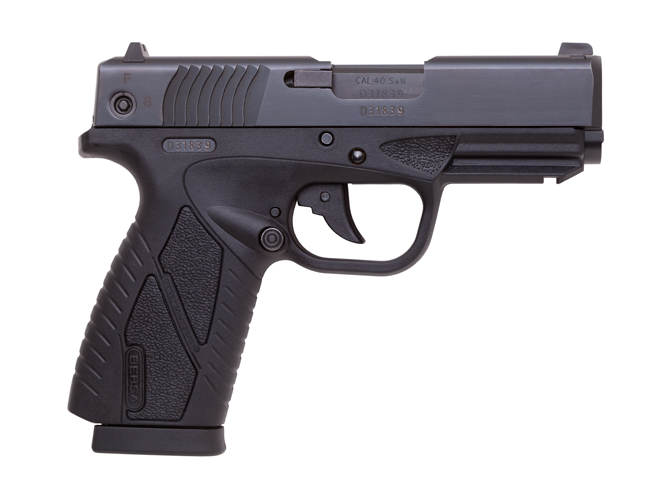 Bersa has developed a good line of pistols in the BP series. I’ve shot each of the three caliber offerings and all have performed very well. The pistols carry well and fit my hand exceptionally well.

If you are looking for a concealed carry pistol in .40 S&W, the BP40CC is worth your attention. If another caliber is more to your liking, consider the 9mm and .380 ACP models. With a suggested retail price of only $430, the guns are a bargain.