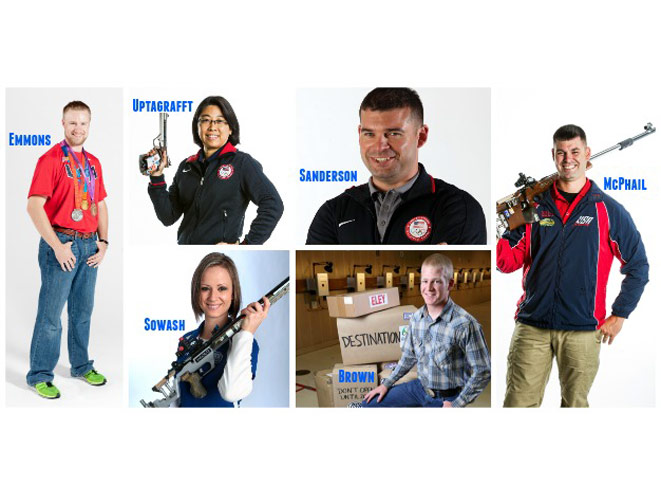 The following is a press release by USA Shooting

Seventeen athletes including 10 Olympians qualified for two May World Cup events during the Spring Smallbore (.22 caliber) Selection Match for Rifle and Pistol that concluded today with Men’s and Women’s Three-Position Rifle.

The match, which took place at the home of the U.S. Army Marksmanship Unit (USAMU), was the second part of selection that for rifle began in early January and for pistol in late February in Colorado Springs, Colorado.

Below we recap each of the six events contested and give you the World Cup selections.

The three Olympians competing stood tall as Michael McPhail (USAMU/Darlington, Wisconsin), Matt Emmons (Browns Mills, New Jersey) and Eric Uptagrafft (USAMU/Phenix City, Alabama) earned World Cup nomination for their performances. McPhail was a man on a mission on his way to earning the top spot, equaling or breaking the world record qualifying score in two of the four rounds he shot. His Day 2 qualification score of 632.3 Tuesday tied the world record. Collegiate shooter and 2015 NCAA Rifle qualifier at Akron University Matt Chezem (Simi Valley, California) finished fourth backed by the sixth-best qualifying score (628.7)of the four total matches which he earned on Tuesday followed by a second-place finish in the finals.

Will Brown (Twin Falls, Idaho) left little doubt throughout the four matches, particularly in four qualifying matches where he put himself 23 points ahead of his nearest competition. He also won both finals during the February portion of selection. Olympian Nick Mowrer (Butte, Montana) finished in second place overall and James Henderson (USAMU/Midland, Georgia), backed by two finals wins this week on his home range at USAMU, would finish in third.

Standings from the February Selection Match remained intact with two-time Olympian Keith Sanderson (Colorado Springs, Colorado) exerting his prowess in the event with a 21-point advantage over second-place finisher and five-time Olympian Emil Milev (Temple Terrace, Florida). Sanderson had the top qualifying score and finished first in the finals in three of the four matches. During February qualification, Sanderson recorded a 35/40 in the final, equaling the world-record finals mark. The Rapid Fire finals require athletes to complete a five-shot series in four seconds and only shots 9.7 points or better are scored a “hit.” Brad Balsley (USAMU/Uniontown, Pennsylvania) finished third.

The three-time Olympic medalist Emmons was the class of the field in the Men’s Three-Position event, winning all four finals and shooting three out of the four best qualifying scores. New daddy George Norton (USAMU/Salina, Kansas) was on top of his game for Thursday on his way to securing the second spot, shooting his second PSS-qualifying score of 1171 and finishing second to Emmons during the Finals. Dempster Christenson (Sioux Falls, South Dakota) was third overall.

The Women’s Three-Position selection was the most tightly contested of all six disciplines, with the top-five contenders separated by less than eight points heading into the final day. Amy Sowash (Richmond, Kentucky) emerged as the top qualifier behind two finals wins in Ft. Benning. Olympian Amanda Furrer (Spokane, Washington) moved from fifth to second today with the third highest qualifying score and a second-place finish in the finals. Texas Christian University junior Hannah Black (Richmond, Virginia) was the lone collegian to earn World Cup status, helped largely by the 591 (one point below the current world record score) she shot on the second day of qualifying back in January. The closeness in this match was defined by the battle for that coveted third World Cup spot. After four separate matches, the cumulative score for both Black and her former TCU teammate Sarah Beard (Danville, Indiana) was dead even. Black edged her for the final spot by virtue of a higher center X count, 120-112. Also performing well this week was 16-year-old Elizabeth Marsh (Searcy, Arkansas) who shot scores of 586 and 584 and moved from eighth to fifth in the overall standings.

The selection match to determine Air Pistol and Rifle athletes for these same World Cups takes place April 25-27 at the Civilian Marksmanship Program ranges in Anniston, Alabama. The top-10 athletes from the 2014 Winter Airgun Championships have been invited. The first World Cup for Rifle/Pistol begins Friday, April 10 in Changwon, Korea with athletes selected based on performances from earlier selection matches. 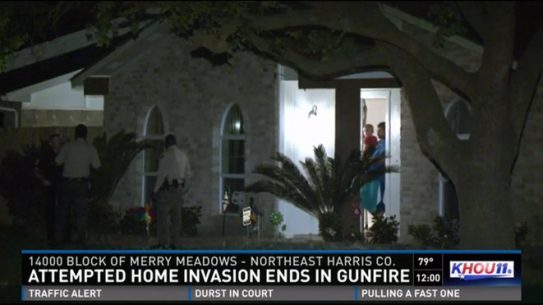 Two armed burglars kicked in the front door of a home in Harris County,...