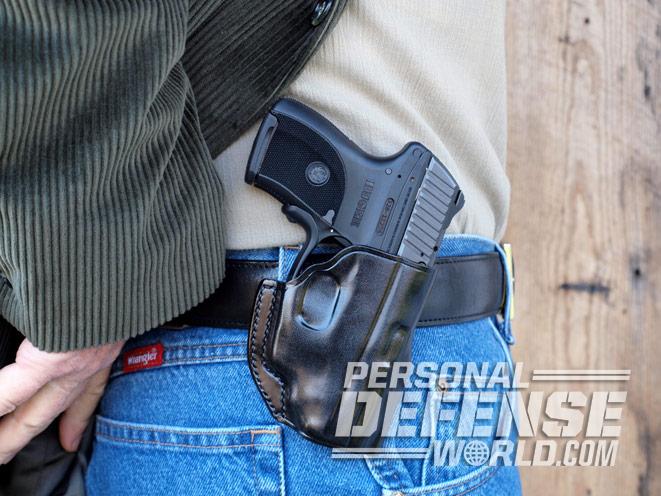 1 of 10
Finding the Right Gun and Holster For Everyday Carry
“No matter what your eventual choice in handgun and holster, these three elements never change: carry comfort, the degree of effort to retrieve the gun and your ability to effectively hit the target.” 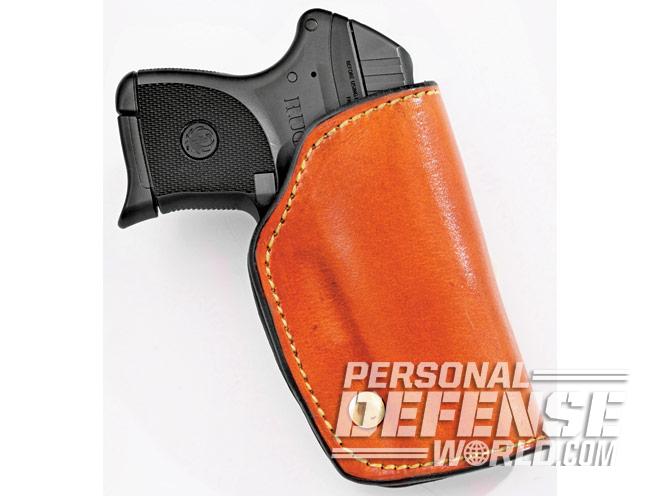 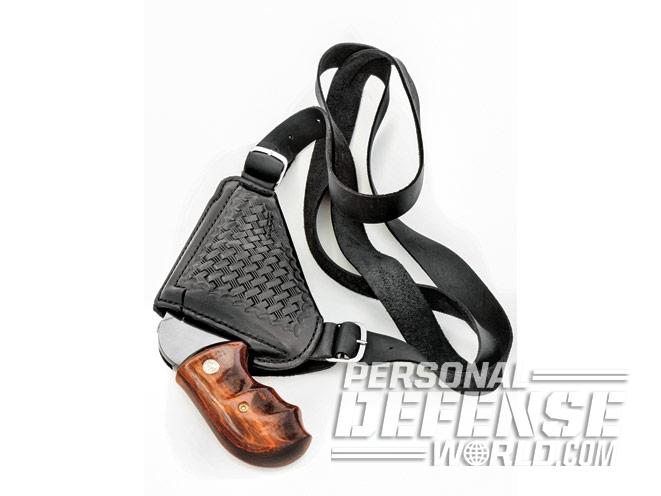 3 of 10
Finding the Right Gun and Holster For Everyday Carry
The Berns-Martin and A.E. Nelson upside down shoulder holster provides maximum concealment with a J-Frame revolver. 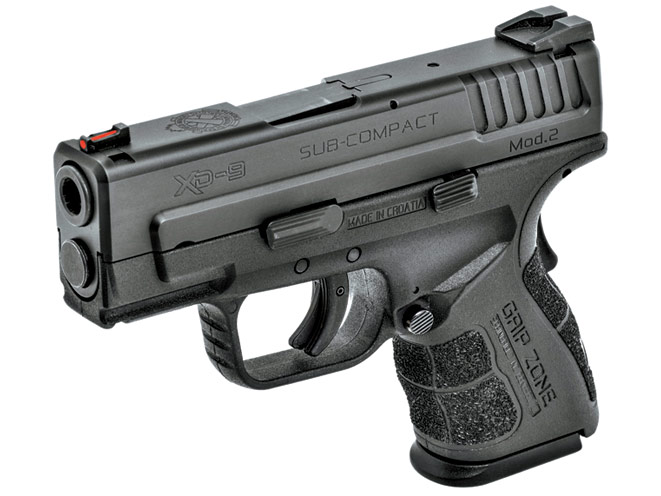 4 of 10
Finding the Right Gun and Holster For Everyday Carry
Springfield’s latest XD Mod.2 series is available in 9mm, .40 S&W and .45 ACP. The subcompact pistols are ideal for concealed carry and home protection. 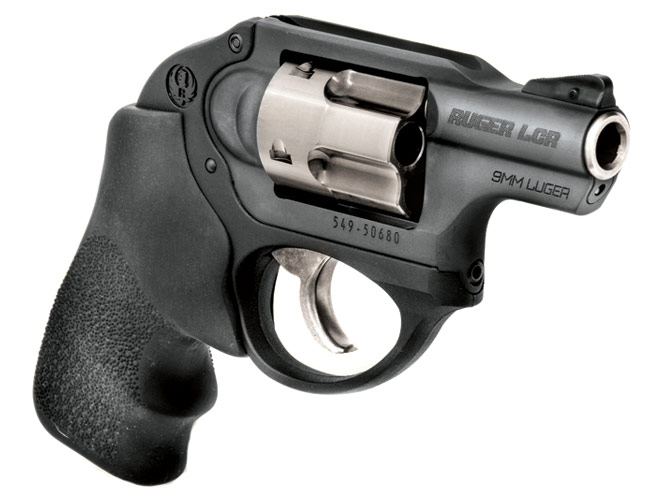 5 of 10
Finding the Right Gun and Holster For Everyday Carry
Semi-auto calibers in revolvers are no longer an oddity with wheelguns like the latest Ruger LCR chambered in 9mm. 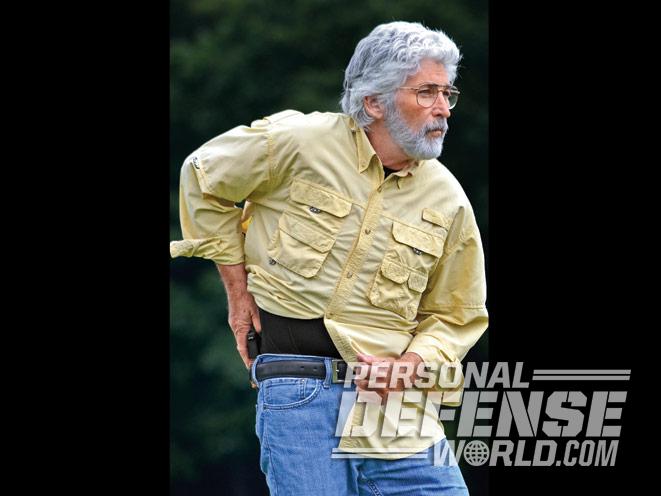 6 of 10
Finding the Right Gun and Holster For Everyday Carry
The author demonstrates a draw with a Glock 42 and the Bianchi Frontier Gunleather Auto-Quick worn at the 4 o’clock position and covered by a shirt. 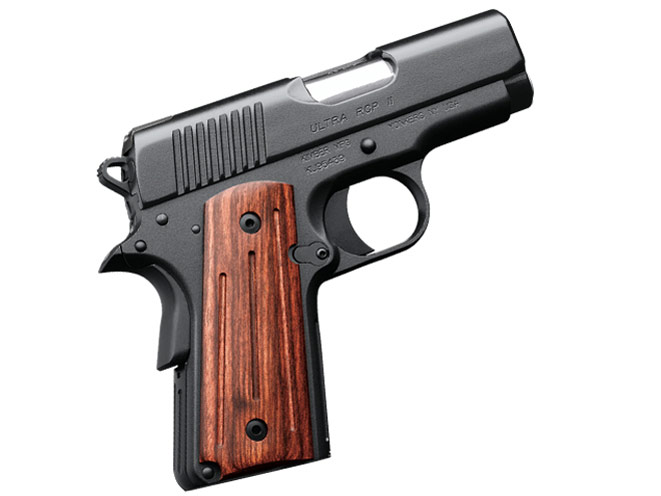 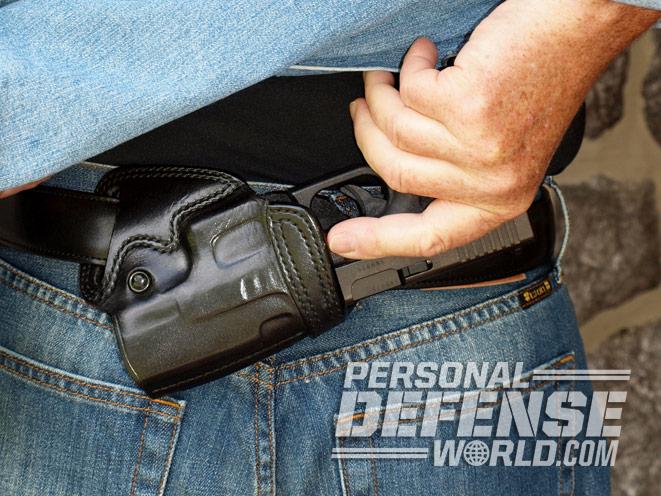 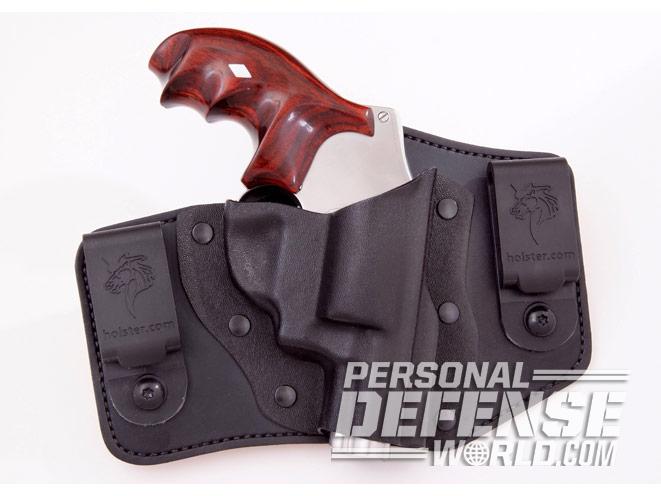 9 of 10
Finding the Right Gun and Holster For Everyday Carry
Smith & Wesson J-Frame in a DeSantis Intruder holster. 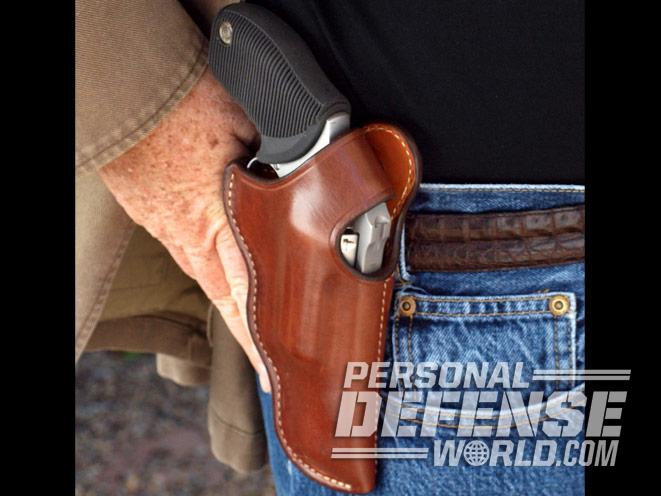 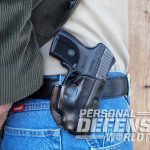 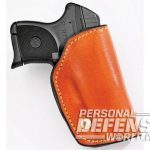 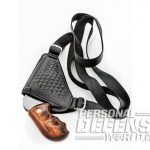 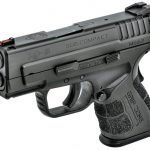 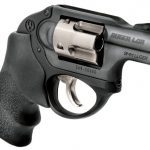 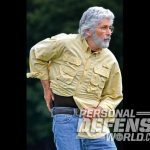 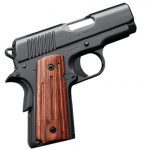 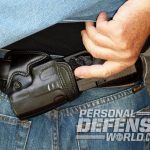 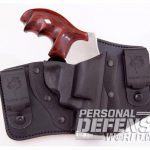 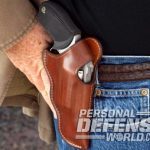 When it comes to finding the gun and holster that works best for you, no matter what you read, no matter how good it sounds or looks, until you try it, live with it and become comfortable and proficient with it, it’s only words. Hopefully, these words can guide you in the right direction toward finding the right carry solution.

If I had a dollar for every holster (and occasional gun) I have purchased and tried for personal protection use over the years, I would only be a few thousand dollars shy of breaking even. The truth is, what we see—and we see a lot in magazines, television shows and movies—what inspires us (the “wow” factor) and what works for everyday carry is as individualistic as one’s tastes in clothing or shoes. The big difference is that the wrong choice of shoes will only be uncomfortable, not necessarily setting you up to fail at a time when failure is not an option.

For personal and home protection, it is essential that an individual finds the right gun and holster combination that will provide three key elements. No matter what your eventual choice in handgun and holster, these three elements never change: carry comfort, the degree of effort to retrieve the gun and your ability to effectively hit the target. The latter also demands an ability to manage the gun’s recoil and get the weapon back on target—this is the most important of all. It isn’t the size of the gun or the caliber of the bullet that matters most, but the ability to consistently put shots on target.

The first element is comfort. It is like the real estate cliché, “location, location, location.” The location of your sidearm has to be comfortable because if it’s not, you are going to start changing it, and every time you do, you start over. I have found (remember, this is me, and it doesn’t mean it’s going to be you) that almost any small- to medium-sized handgun (.380 ACP and 9mm semi-autos in particular) worn in a belt holster (or paddle rig) at the four o’clock position is going to be comfortable. This setup is also going to be easy to conceal with almost any kind of clothing, from a T-shirt to a tuxedo jacket. So why go any further? Because sometimes less gun, less holster and less exposure is more practical.

Virtually every .380 ACP and subcompact 9mm that works with a belt or paddle holster for ease of concealment and draw also works in a pocket holster, and nothing is more comfortable than a small pistol carried in a pocket. If that works for you, it soon becomes second nature, like carrying your wallet or cell phone. It is slower to draw but unobtrusive no matter how you dress. Pocket holsters come in different styles and materials, but ultimately they must encompass these attributes: obscure the shape of the gun, solid retention and ease of draw, and an exterior surface that will stay put and remain upright in the pocket. Synthetic exteriors with a “tacky” surface that grabs pocket fabric or leather holsters with a rough-out suede finish are the best choices.

I have to admit that I’ve never settled on one means of carry. One gun, yes, but two methods of carry—the four o’clock belt rig position or a pocket holster. Most concealed carriers (not necessarily those who carry a gun as part of their profession) will find these two options the most successful over time. Professionals (law enforcement, personal protection details, etc.) often need faster access and will defer to a traditional belt, inside-the-waistband (IWB) or shoulder holster for a primary handgun, with small-of-the-back, pocket or ankle holsters for a backup gun.

There was a time when shoulder holsters were the most practical means of concealed carry for plainclothes law enforcement and individuals with carry permits. Shoulder holsters are also among the oldest of all concealment methods, dating back to the mid-19th century. However, they demand that you wear a jacket or an outer garment to completely conceal the holster, and you have to keep the jacket on regardless of where you are. There are excellent choices today in shoulder holsters to accommodate small- to medium-frame pistols, and caliber is no longer a limiting factor, as you can pack a .45 as easily as a .380.

For backup guns, the first rule is deeper concealment. On occasion, I will carry a backup gun, and this is usually a small .380 or even an over/under derringer-style pistol. These will end up in either a pocket holster or an IWB rig. Narrow frame size allows an IWB holster to be more comfortable for this objective. Others will find an IWB suitable for regular carry with a larger handgun.

Comfort is the leading factor in going with an IWB holster for use on a daily basis, however there is a way to split the difference here as well. Some IWB rigs use a single, wide, steel belt clip. You can place the clip over the belt as intended, but rather than securing the holster and gun inside your waistband, let it rest between the waistband and the belt. It is more comfortable, though it compromises some aspects of IWB concealment. There are also several holsters on the market specifically designed to be worn in this fashion, such as the Bianchi Frontier Gunleather Auto-Quick and Galco Jak Slide.

Deeper concealment for a backup gun usually leads to undergarment rigs, such as belly bands and clothing with integral holster pouches sewn in. The other option is an ankle holster, which has saved more than one cop’s life in its time. Ankle carry provides slower access and is limited to small handguns. Though reliable and secure, it is seldom a go-to method for general CCW use.

There are two forces at work here, snub-nose revolvers and subcompact semi-autos, both of which are available in calibers from .380 ACP up to .45 ACP. In my experience, the choice between a revolver and a semi-auto has always been very personal. New manufacturing technologies for both have marginalized many of the distinctions between wheelguns and semi-autos, such as caliber and ease of use.

The fundamental advantages to a small-frame double-action (DA) revolver begin with ease of use. A revolver has no manual safety—you draw, aim and, if the situation demands, pull the trigger. Alternatively, with most revolvers, one can cock the hammer manually. Firing in single-action (SA) generally increases accuracy as well as greatly reducing trigger-pull effort. And there is never any question about whether a round is chambered. Even if the hammer is resting on a deliberately empty chamber for safety, pulling the trigger or cocking the hammer automatically rotates the cylinder to the next chamber.

RELATED STORY: How To Choose The Right Pocket Pistol For Self-Defense

Semi-autos were originally designed with a manually operated safety mechanism to prevent accidental discharges, thus the process (of the wise) was to carry a gun with a chambered round and the safety engaged, then draw, release the safety, aim and fire. Many of today’s semi-autos employ a blade trigger safety, which is a separate safety lever built into the trigger itself. This type of safety extends beyond the face of the trigger, requiring it to be depressed with the trigger before the gun can discharge. There is rarely a manual safety with this type of design. Other semi-autos have neither safety device and rely on a long, heavy trigger pull like a double-action-only (DAO revolver. This again becomes a matter of personal choice.

Cartridge capacity and ease of reloading are the next considerations to take into account. Revolvers, with very few exceptions, limit capacity to six rounds, or five in most small-frame snub-nose (2-inch barrel) models. Any question of accuracy between a revolver and semi-auto has little merit, as both in comparable calibers and approximate barrel lengths are generally identical. It is in reloading where the semi-auto excels.

There is a dynamic at work when you fire a handgun: The lighter the gun and the larger the caliber, the greater the recoil. This is where everything you have read comes down to what works and what doesn’t work for you. There is absolutely no substitute for trying a gun and caliber combination at the range before you commit.

If there is a shooting range that has certified instructors and rents guns for training and target practice, avail yourself of this opportunity to try both revolvers and semi-autos in calibers ranging from .380 ACP up to .45 ACP. The quick lesson learned from this exercise is to find out what an individual can handle in terms of firepower and consistent accuracy. Often we discover that many people are not as “recoil sensitive” and can tack-drive a target with larger calibers, while others find harsh recoil so uncomfortable they prefer not to shoot that type of gun. This is trial and error and a function of practice necessary before making the decision on which gun and caliber to purchase. 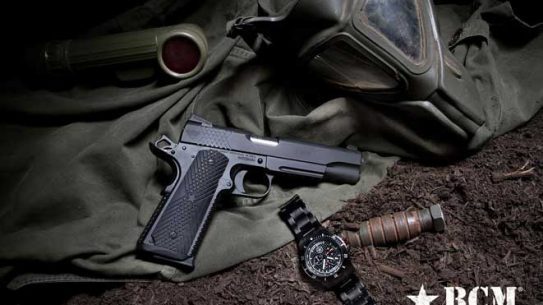 Chambered in .45 ACP, the BCMGUNFIGHTER 1911 emphasizes both elegance and lethality in equal...