AR-15-based pistols are not new, but this one is an Armalite AR-15, and that should mean a lot to anyone with a sense of history. Armalite invented the AR-10 and AR-15 c.1957, and put America on an even footing with the Kalashnikov AK-47 as a global weapons platform for military and civilian use. Initially, the M16 military rifle and AR-15 Sporter civilian versions (built by Colt, which purchased the manufacturing rights from Fairchild/Armalite in 1959) became popular during the Vietnam War era, as much for their symbolism as their use. More than half a century later, the AR platform, in all the variations produced today by manufacturers the world over, is the most routinely carried American-designed rifle of its time, whether in use by U.S. military, federal, state and local law enforcement or civilians. That’s quite an achievement, so when Armalite puts its name on an AR-based pistol, it’s something of a turning point in the use of the AR-15 as a handgun, not a rifle.

Folding stocks, collapsible and adjustable stocks, short barrels and an endless variety of alterations to rifles dating back to World War II (and earlier) have made more compact, more easily carried and deployed rifles almost a staple of military operators. And like all things military, there emerges a thriving market for a legal civilian equivalent, with legal meaning the gun meets specific dimensions (under the NFA and BATFE regulations) and, of course, being a semi-automatic design. The rest of it is where this all becomes very interesting.

With an AR-15 the big question is “What defines the difference between an SBR and an AR-15 Pistol?” An SBR, or short-barreled rifle, is actually legal to own but requires filing an ATF Form 1, getting local law enforcement approval (usually from a county sheriff or chief law enforcement officer) and paying a $200 tax stamp. An AR-15 pistol requires none of the aforementioned. Cut to the chase and the bottom line, even by BATFE standards, an AR-15 manufactured as a pistol can have a short barrel; it just can’t have a shoulder stock or be able to have one mounted. This determination has led to various AR-platform “megapistol” configurations and operating systems with dedicated pistol buffer tubes (shorter tubes than a standard rifle with no capability for mounting a shoulder stock) and piston-driven systems specifically designed to eliminate the need for a buffer tube entirely, and thus creating a substantially shorter pistol.

The Armalite leads the super compact class even with a buffer tube, as it has the shortest barrel currently on any AR-15 pistol, a mere 6 inches, for an overall length of just 24 inches (17 inches folded). The SB15 Pistol Stabilizing Brace allows the M15P6 to be grasped one-handed, if need be, by securing the shooter’s forearm in alignment with the buffer tube. Once the SB15’s injection-molded cuff is adjusted and secured with the hook-and-loop closure, the gun is literally an extension of your arm. In general, this is a good target-shooting tool, especially from a rested position with optics, but in practical terms one would be better served using a two-handed hold with the support hand grasping the magazine well, and letting the SB15 “fall were it may” so long as it is not touching your cheek or shoulder (which could “technically” make the M15P6 an SBR, even though BATFE does not consider it so when used as intended with the SB15). With the Sig Sauer Pistol Stabilizing Brace affixed to the Law Tactical Gen 3, it remains ridged and will not rotate or move as on most buffer tubes. This makes it a rock-solid support for firing with only one hand.

Armalite uses a double-lapped, chrome-lined, chrome-moly, 6-inch barrel with a 1-in-7-inch twist rate (making it suitable for .223 Remington and 5.56mm NATO 55- and 62-grain bullets) that’s fitted with a distinctive, twisted, 2.5-inch-long OSS Bannar Flash Hider Muzzle Brake (FHMB). The forged aluminum flattop upper receiver has a 12-inch-long Picatinny rail to allow easy placement of backup iron sights (the gun comes with Magpul MBUS adjustable flip-up sights) and additional optics for greater precision. For the shooting test, I equipped the Armalite with an Aimpoint Micro H-1 with an LRP quick-release mount. This very compact red-dot sight is ideally suited for use on AR-15 pistols.

Standard equipment with the M15P6 includes an Armalite light-contour KeyMod handguard, an AXTS Raptor ambidextrous charging handle, an upgraded Magpul MOE-K2 pistol grip, an ambidextrous thumb safety, a two-stage precision trigger, the Law Tactical Folding Stock Adapter with Sig Sauer brace and one 20-round magazine. As equipped, the gun weighed in at 6.5 pounds (empty). Although the Armalite comes with a lot of upgrades, you’ll need to purchase KeyMod mounting rails separately (which fit into the KeyMod slots) in order to mount a combination tactical light and laser under the handguard.

The M15P6 pistol handles pretty much like an SBR with very modest recoil. The two-stage trigger has a crisp, predictable break with an average pull of 5.4 pounds. I found the ambidextrous safety easy to operate with either the thumb or trigger finger, and depending upon how I was shooting the gun (standing or from a semi-rested position) and using the Aimpoint Micro H-1, either became intuitive after getting on target.

Equipped with the Aimpoint Micro H-1, the Armalite pistol was also remarkably consistent, placing multiple five-round groups at 1.25 inches inside the 10 and X rings of a Speedwell B-27 silhouette target. A second set of tests was conducted shooting rapid-fire off-hand in two- and five-shot bursts from 25 yards. Average five-round groups measured 2.5 to 3 inches, all in the center body mass of a B-27 target. With no appreciable recoil and continual on-target sighting, this is an excellent CQBP with the capacity and accuracy of an AR-15 rifle. 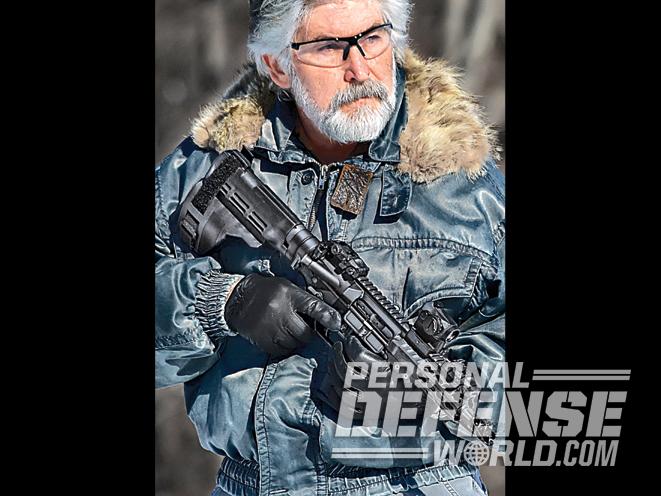 If there is one overriding advantage to an AR-15 pistol it is in the combination of capacity and maneuverability. The Armalite scores high in this area given its short 6-inch barrel, its standard upgraded features and the integrated Sig Sauer Pistol Stabilizing Brace. While I can’t find too many tactical applications for using the brace, it is excellent for target shooting from a rested position, and even off-hand if you have the forearm strength to hold up a 6-pound pistol.

Overall, the M15P6 is an excellent .223-caliber pistol configuration with more than enough standard upgraded features to make it an ideal out-of-the-box tactical and defensive firearm. And above all else, it is an Armalite.