I didn’t learn to shoot until I was in my mid-20s. Prior to that, the only self-defense measure I had was the little canister of pepper spray that my father got for me when I started driving by myself.

I carried it faithfully all through my student years, but luckily I never had to use it. I was fortunate; teenage girls are one of the most vulnerable groups and their concealed-carry options are quite limited due to their young age. Pepper sprays are a good option for them and for anyone else who can’t or doesn’t want to carry a gun. Unless you happen to live in an area where pepper spray is illegal, it should be part of your personal protection arsenal. Manufacturers are continually working to make pepper sprays that are more effective yet also light to carry and easy to use.

To that end, Kimber has introduced its new pepper spray model, the PepperBlaster II. Pull the trigger on this little guy and it fires a dose of powerful gel up to 13 feet at over 100 miles per hour. A blast like that easily penetrates through any mask, bandana or around any type of glasses an attacker might be wearing. Since the formulation is a gel rather than the usual aerosol, there is much less blowback and wind dispersal, making this weapon much safer for its carrier and any bystanders who would normally be at risk of catching a whiff of the spray. This is very lucky, because Kimber has formulated its gel with 10-percent capsaicin (made from cayenne peppers) to produce a potent blend that instantly causes severe coughing, nausea and blindness that lasts up to 45 minutes. At its full range of 13 feet, the gel disperses to cover only about a 2-foot-wide zone; it will coat the attacker but not much else. At its minimum distance of 2 feet, the gel zone is only a few inches wide—perfect for zeroing in on an attacker’s face. 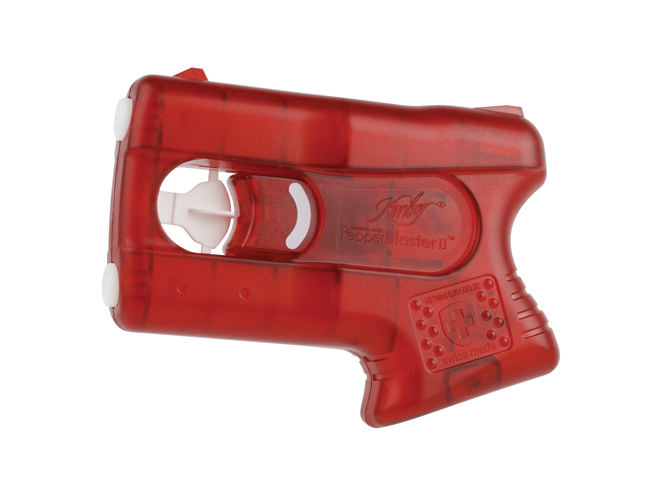 The PepperBlaster II uses a unique firing system that sets it apart from other defensive sprays. Instead of storing the spray under pressure and releasing it when fired, the PepperBlaster II’s gel is not pressurized. When the trigger is pulled, a power-driven piston expels the gel at high speed, resulting in a much more powerful blast than regular pepper spray. Each PepperBlaster II unit contains two capsules of gel, and pulling the trigger expels the entire capsule. You therefore get two shots per unit, but they’re powerful shots, capable of completely coating and disabling an attacker. Best of all, since the spray isn’t pressurized, its lifetime is much longer than ordinary pepper spray. Pressurized sprays tend to go bad due to gradual loss of pressure over time or due to temperature swings. By eliminating pressurization, Kimber extended the PepperBlaster II’s lifetime to about four years. Of course, if you’re practicing your technique regularly, you’ll probably replace it much more often, but it’s nice to know that an older unit will still do its job when called upon in an emergency.

The PepperBlaster II improves on the original PepperBlaster with a few modifications that make it easier to grasp and fire. Instead of a plain square shape, the new model has a small pistol grip that makes it second nature to orient it in your hand and hold on to it. This is particularly valuable for people who carry their spray in a purse or backpack where it might flip over or get turned around. The grip instantly tells you which way to hold the spray so it faces the attacker. After all, fumbling around in an emergency can easily create a life-threatening delay. The pistol grip is also more ergonomic for those with arthritis or other hand problems. The PepperBlaster II’s trigger has about 6.5 pounds of pull, so it should be a relatively easy action even for those who have difficulty firing a gun. The other improvement found on the PepperBlaster II is the addition of small sights on the top of the spray. While these may be unnecessary at very close range, they can be helpful when aiming 10 to 12 feet away to bullseye an attacker’s face.

The PepperBlaster II is only about the size of a deck of cards, so it fits easily in a pocket or purse. For joggers or anyone else who might not have a pocket, Kimber also sells inexpensive clips to hang onto your waistband or belt to hold the spray. Pepper sprays are particularly valuable for walkers and joggers because, in addition to human threats, they can be used against aggressive dogs without causing any permanent damage. The PepperBlaster II weighs only 4 ounces, so it is very comfortable to carry and it won’t weigh you down or make your waistband sag. Kimber has also taken measures to reduce the risk of accidental discharge. The trigger has a small plastic tab in front of it that prevents it from being pressed unintentionally. When your finger goes to the trigger, the tab swings out of the way naturally and easily.

On the flip side, Kimber wants you to know that the spray will be ready when you need it. For this purpose, they’ve added a unique feature to the PepperBlaster II to show whether or not the unit is fully charged. When a unit is fresh and has never been fired, a white stripe is displayed on the side of the trigger. However, if one or both capsules inside have been discharged, the stripe is hidden. In this way you can never mistake an old, used spray for a new one and find yourself defenseless when it counts.

Most people who carry pepper spray neglect to practice with their sprays, assuming that the devices are so easy to use that there’s no need to train with them. In reality, they would be much better prepared if they trained every year or two with their sprays. A training day provides an opportunity to role-play various scenarios, become familiar with the trigger mechanism on the spray unit and get a feel for exactly how far the spray goes and how widely it disperses. Reading that your spray is effective out to 10 feet is fine, but do you have a good sense of exactly how far away a person has to be before they’re outside that zone?

To that end, Kimber sells PepperBlaster II training units, which are filled with a washable blue liquid instead of pepper spray. The training units are orange, while real PepperBlaster II units come in red or a more subtle gray. I would have preferred if the training unit was a more obviously different color than the standard unit, as some could get confused between the two especially if they are not next to each other. With the trainer unit, you can get a feel for the trigger and the spray’s range with no ill effects. Of course, you can also train with the real spray and use up an old unit whenever it’s time to replace it with a new one. It is best to train using a face-sized target such as a paper plate mounted at eye level outside. 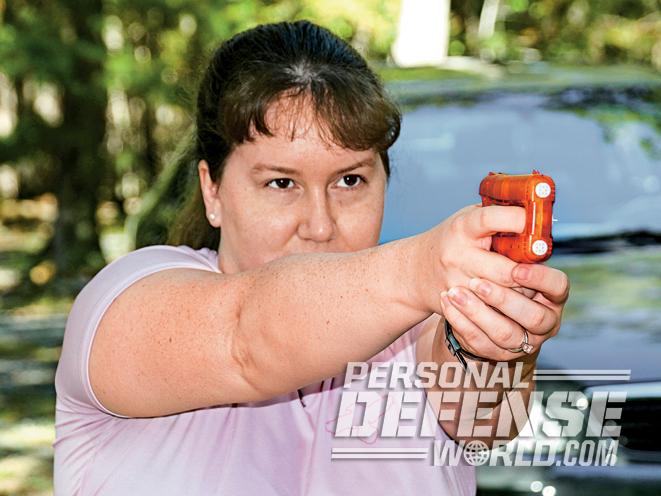 There are many pepper-spray training classes all over the country; there’s a good chance that one is offered near you. Good resources for class information include your local police department, shooting range and self-defense trainers. They may offer classes specifically on pepper-spray techniques, or the use of pepper sprays may be covered as part of a more general self-defense course. Either one is well worth your time and money. Local instructors should also be familiar with any local laws and regulations concerning the carrying of pepper spray. Unfortunately, some jurisdictions limit pepper sprays or ban them outright (and these tend to be the types of places where you feel the most need to carry a spray). If you live in such an area, a self-defense class will be all the more important for you to take.