The Bersa Thunder 40 Ultra Compact Pro is a compact pistol from Argentina that is of excellent quality, very concealable and quite accuarte.

The truism goes “You get what you pay for,” but sometimes you get more than what you pay for. The perfect example of this is the Bersa Thunder 40 Ultra Compact Pro. These handguns are made in Argentina, and all of the ones I’ve tested have been accurate, reliable and well worth the money.

Like all Bersa pistols, the Thunder 40 arrived in an unassuming pasteboard box with an extra magazine, locking key (more on that later) and an owner’s manual. When I removed it from the box, I wiped off the excess lubricant and gave the pistol a once-over. Fit, finish and workmanship seemed to be top drawer, and its matte black finish gave it a business-like appearance. As it is a Thunder 40, it’s chambered for the .40 cartridge and has a 10+1 ammunition capacity. The Thunder 40’s locking mechanism is based on the Browning/Petter design to foster reliable feeding and ejection. It has a traditional double-action/single-action (DA/SA) trigger that allows you to fire the first shot in DA mode before reverting to SA mode, unless it’s decocked. It has a number of features I want to go over, so we’ll review these from top to bottom.

Sights on the Thunder 40 are fixed and of the three-dot variety, but they are mounted in dovetails so they can be easily replaced or drifted right or left for windage adjustments. The slide is steel and serrated for easy gripping when the user retracts it. On top and just behind the barrel is a loaded-chamber indicator; the extractor is robust and there’s a generous-sized ejection port. An exposed Commander-style hammer offers good purchase for cocking.

The DA trigger is long but smooth, with almost no take-up, and its pull measures about 12 to 13 pounds. In SA there’s a hint of take-up, then it breaks clean at about 5 pounds with little noticeable overtravel. A one-piece aluminum alloy frame has an integral accessory rail on the dustcover, and the triggerguard is hooked and serrated in front. With the exception of the disassembly lever and magazine, the controls are ambidextrous. The magazine release can be reversed for southpaws—it’s right behind the trigger just where U.S. shooters like it. The one-piece, black polymer grips are checkered on the sides and rear, plus the frontstrap on the grip frame has finger grooves and serrations.

Taking a step back, the rearmost lever on the frame below the slide is the safety/decocker. When the hammer is at rest, it serves as a safety in the “up” position. When the hammer is cocked, it serves as a decocker. The Thunder 40 cannot be carried in Condition One and there is no magazine safety. Ahead of the safety is the slide-lock/release lever and on the left side of the frame, ahead of this lever, is the disassembly lever.

A staggered magazine holds 10 cartridges in .40 and has witness holes at five and 10 rounds, plus a polymer base with a finger hook. You’ll note right below the disassembly lever is a round hole; this is for the handgun’s internal lock. Insert the little key and turn downward to lock the action and prevent firing. This is a good feature if you have toddlers about who get into everything and are too young to understand gun safety.

To test-fire the Thunder 40, I selected three brands of .40 ammunition. Some of the smaller ammunition producers are really making some first-class products, and one such example is HPR. I used its 180-grain jacketed hollow-point (JHP) load with “Clean Technology” to keep your handgun cleaner between uses. Another of these smaller outfits is HSM Ammunition. The company has a Double Duty pack that contains 250 rounds of 180-grain full metal jacket (FMJ) remanufactured cartridges and 50 rounds of 180-grain Premium JHP rounds for duty/defense. Lastly is Winchester Ranger LE ammunition in a distinctive box. The load I selected has Winchester’s 165-grain T-Series JHP bullet and it really steps out there. You can see my velocity readings in the accompanying performance table. 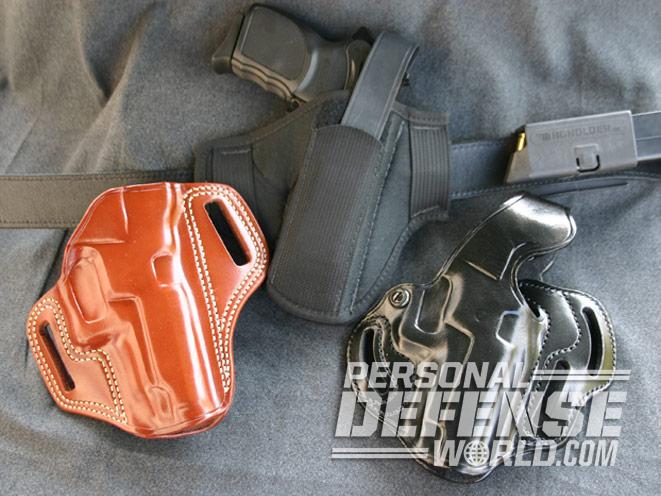 Holsters for the Thunder 40 Ultra Compact Pro are not hard to find. One of the most versatile and one I’ve used extensively is the Super Belt Slide from Uncle Mike’s. This pancake-style holster made from ballistic nylon can be adjusted to fit any number of handguns. The safety strap and release ride inside “tunnels” lined in Velcro so they can be moved up or down to tailor the holster to your handgun and put the release where you want it. It’s my “when all else fails” holster for new guns that don’t have a holster made specifically for them yet.

For leather holsters I used two models from Galco. One was called the COP 3-Slot Holster, black in color with a thumb-break safety strap. It’s also a pancake type belt rig for strong-side carry, and the slots will accommodate belts up to 1½ inches in width. The safety strap incorporates a sight protector and the holster body is molded to the shape of the pistol with a sight channel built in. Another is the Combat Master, brown in color, with two 1½-inch slots that carry it on the belt in a FBI tilt. This belt-slide holster is open-topped with double-row stitching and is also boned for a good, secure handgun to leather fit. Both are very well made and finished, and have great eye appeal.

To pack my spare magazine, I used a polymer carrier from MagHolder. It has an easy-on/off design and has two retention tabs built in to keep the magazine secure until you need it. For comfort and concealability, it clips onto the belt holding the magazine in a parallel position, and I use this placement on my duty belt, so it’s a natural location for me. 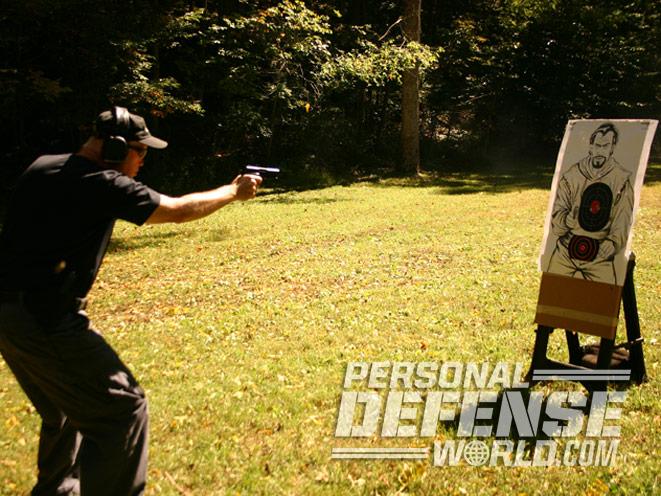 I had a beautiful day at the outdoor range I use, with just the right temperature and no wind. My first step was to chronograph the ammunition to get velocity readings. Step two was to set up my target stand at 15 yards for a practical accuracy evaluation. The Thunder 40 Ultra Compact Pro has a 3.25-inch barrel with conventional six-groove rifling and a 1-in-16-inch right-hand twist. Shooting was done using a sandbag rest from the bench with the pistol in SA mode. I shot three 5-shot groups with each brand of .40 ammunition. HPR came first, then HSM (both Practice and Duty loads) and finally the Winchester Ranger LE cartridges. The best group of the day was 1.41 inches with the HPR 180-grain JHP load. Winchester came in a very close second and HSM third. None of the group averages were over 3 inches, a testament to this little pistol’s accuracy potential.

To get a real-world idea of performance and reliability using the Thunder 40, I set up a silhouette target at 15 yards and shot a 30-round combat qualification course using the HSM Practice load with the 180-grain FMJ bullet. I use this course for most of my self-defense/LE-related handgun evaluations, as I have to qualify at work using this course and that allows me extra practice.

The course starts at 3 yards with one-handed point shooting. After changing magazines, I move to 7 yards for three strings of double-taps using the sights. Then comes a body armor drill—two shots center mass, one to the pelvis— and finally shooting from a 15-yard barricade position while standing and kneeling. The magazines are loaded with only six cartridges each to ensure several rapid magazine changes. Judging from the hits on the non-regulation target, I would have scored 149/150. I used the Uncle Mike’s holster and the MagHolder magazine carrier, and they worked very well when I had to draw and reload.

On the bullseye target, I found the gun shot a couple of inches low using a center point of aim (POA), and I adjusted accordingly. The Thunder 40’s sights are Sig Sauer #8 front and rear, so to get perfect elevation for your POA, you can get a higher or lower Sig front sight. This minor POA discrepancy had no effect on my combat shooting performance, and my biggest concern here was “street” accuracy and functional reliability.

I experienced zero malfunctions during testing, and the Thunder 40 was very controllable in rapid fire with one or both hands holding it thanks to the grips and grip frame features. The only bobble was shooter-induced. I’m so used to using DAO pistols and DA revolvers that I got caught off guard a few times by the safety/decocker lever. I either pulled the trigger and nothing happened (safety on) or holstered the pistol cocked (forgot to decock). If you use a traditional DA/SA pistol like this, you’d better get used to operating this lever by practicing, practicing, practicing. I was so impressed with this pistol that the Thunder 40 might be a new addition to my personal battery.