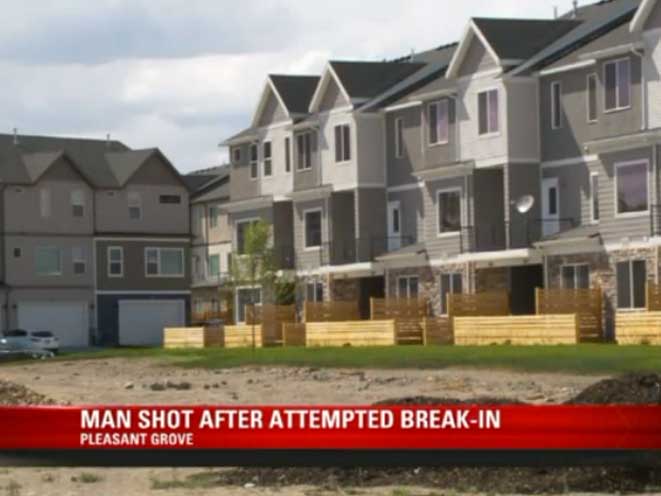 A Utah homeowner shot and killed a man for allegedly attempting to force his way into a residence on Sunday morning.

A press release from the Pleasant Grove Police Department says police responded to a report of a shooting at 1700 West and 60 South at around 5:42 a.m. A man shot another man for trying to gain entry to a home through a second-story balcony door, FOX 13 reports.

Police said 24-year-old Christian Chichia started pounding on the door of the home, awakening the homeowner and his wife. The husband grabbed his home defense handgun and went downstairs to investigate the noises.

The homeowner arrived at the front door and his wife — who was on the third floor — called down to her husband and said the intruder was now on the second-story balcony.

Lt. Britt Smith of the Pleasant Grove Police Department said the homeowner went to the balcony door to find Chichia jiggling the door in an attempt to gain entry. He then opened the door slightly to talk to Chichia.

“[The homeowner] unlocked it so that he could open it and engage in conversation with Chichia, and that’s when Chichia forced the door and attempted to open it, and that’s when the homeowner—not knowing why he was there, what his intentions were, fearing for his safety and his wife’s safety—fired a round,” Smith said.

Chichia was shot in the chest. He was transported to Utah Valley Regional Medical Center, where he eventually died from his injuries.

According to FOX 13, Smith said the homeowner and Chichia lived in the same complex of townhomes, but they didn’t know each other before the incident.

One of the theories is that Chichia was intoxicated and believed he was trying to gain entry to the home he shared with several roommates, Smith said. Chichia had an arrest record, but they were mostly alcohol-related and non-violent offenses.

The homeowner has not been charged in the shooting thus far.

“So obviously in the state of Utah you have the right to defend your home… But this case will be submitted to the Utah County Attorney’s Office,” Smith said. “They’ll review it, staff it, and screen it for any charges, but at this point the Pleasant Grove Police Department isn’t making any arrests, we’re not filing any charges.”

Three pro-gun measures have been signed into law by Tennessee Governor Bill Haslam.