by Denis Prisbey
in Guns, Rifles
0

Simple, fast, light, reliable and affordable, the lever action still has a place as a defensive home carbine.

One of the greatest fallacies for those looking to upgrade or augment their home defense arsenal with a new long gun is the idea that you can’t possibly defend your hearth and homestead without military-grade hardware, sophisticated optics and a 200-round drum magazine. Statistics, and reality, argue against that concept in terms of absolute requirements for repelling borders and defending castle walls. Do you typically need to blow off 200 rounds in a single in-home encounter or shoot the wings off a gnat at 300 yards? Nope. Do you really need to be lugging a 12-pound defensive package around the house? No again. So, what do you need?

First off, as with any tool, look at the job the tool needs to do. Forget hordes of angry villagers with torches at the gates, or even herds of innocent zombies just out for a midnight snack. The statistical norm for a home “attack” is one or two people attempting to break in for one of three reasons: intoxication, anger or theft. These run anywhere from the drunk mistaking your home for somebody else’s, the ex-boyfriend out for revenge, the classic (and random) middle-of-the-night burglar and the organized home invasion. With the exception of the more “targeted” home invasion, most threats to the occupants are not particularly well thought out, not highly organized and not normally carried out by more than one or two hostiles. Most are close up, do not involve either extended timeframes or extended distances and do not burn up truckloads of ammunition.

An apartment dweller would rarely be shooting 300 yards in defense of wife and child, and the family living in a quiet suburban cul-de-sac is unlikely to need to shoot beyond the boundaries of either front yard or back fence. Obviously, the remote ranch house an hour from the nearest 911 response is a different matter, but for the majority of us, the home-defense rifle simply doesn’t have to be a heavy, high-capacity, credit-card buster.

Given all that, why do we even want a rifle in the first place? There are several reasons—a rifle tends to be more powerful than a handgun (even when firing handgun ammunition because of velocity gains through longer barrels), it’s frequently easier for many to shoot well at varying distances than a handgun, it extends the practical range over a handgun, it can be more intimidating to an intruder than the average handgun, and the right rifle can be relatively quick for even a non-gunnie to learn and operate effectively.

In choosing your rifle priority one is reliability. It has to function, should be simple to operate and should not be subject to ammo sensitivity against a wide range of brands and bullet types. Priority two is power, which should be in a “serious” caliber, such as .38 Special on up. And priority three, believe it or not, brings accuracy in last. It’s nice to be able to hit a marauding gnat at 300 yards, but in most cases if your home-defense rifle can hold inside 4 inches at 100 yards, it’ll be good enough.

All of this leads up, as you’ve noticed, to the humble lever-action rifle as a candidate for your home-defense arsenal.

There’s nothing wrong with the idea of a lever action, however archaic you perceive it to be. The repeating lever action rifle in many calibers, several models and multiple configurations was one of the original home-defense tools for much of the Western half of the U.S. for well over half a century, where it was just as effective in that role as it was in the hands of generations of hunters who brought home food for the table using it.

The design is simple to learn: Fill it up through the loading gate, work the lever to chamber a round, cock the hammer, pull the trigger to fire, repeat as necessary. No separate magazines to lose or have fail to seat completely, no complicated controls to remember, no scope to knock loose, fog, or blur out at inside-the-house distances, no dead batteries, and less chance of “spray-and-pray” shooting as opposed to the average semi-auto like an AK-47 or AR-15.

Magazine capacity, of course, is much less, but six to 10 rounds in a lever gun should easily handle 95 percent of the home-defense scenarios most of us are likely to encounter.

Which one should you choose? Look in your gun safe. You may already have what you need, whether it’s Grandpa’s old hand-me-down Winchester in .30-30, a modern Browning BLR in .308 Winchester, or even your Cowboy Action Shooting competition Marlin or Uberti. If not, evaluate your layout and decide whether you want the additional power and range for both indoor and outdoor applications of a centerfire rifle cartridge like the .30-30 or .308, or if a handgun caliber that’ll be softer on the eardrums indoors while still easily carrying 50 or 75 yards outdoors would be a better choice.

For some, the utility of stockpiling one load for rifle and handgun, like the .357 Mag or .45 Colt, is a further consideration. For others, the ability of family members to tolerate recoil is a factor, and while I do recommend something heavier, in such cases the rimfires in .22 LR, .22 Mag and the hotter .17 calibers may be a better choice with no disconcerting recoil or extreme muzzle blast. My wife has two much-beloved Marlin 1894s in .32-20 from her cowboy competition days. She knows them intimately, she shoots them better than anything else in the vault, and in her case, she’d be far better off with her Marlins than with any of my tricked-out AR-15s if it came to somebody kicking our front door in.

Indoor practicality dictates a short barrel. Shorter barrels can shoot every bit as accurately as longer barrels, and they maneuver infinitely better through tight confines and angles if you have to. The general recommendation in case of loud noises in the middle of the night is to congregate with a phone in one defensible location in the home while waiting for the sirens, but sometimes you have to do what you have to do, and a short, light, handy lever-action carbine just navigates easier all the way round than a longer barrel does. I do own Grandpa’s old Winchester Model 94 in .30-30, and its 20-inch barrel is the longest I’d go on a home-defense carbine by choice. I also have a 24-inch Marlin 1894 in .45 Colt that I could tolerate reasonably well, if it was all I had. Keep in mind that octagonal barrels will be heavier than round, and the shorter you go the less magazine capacity. There’s no absolute, so buy what works best for you, or use what you already have if money’s tight.

Lever action sights may not be outstanding, but they are typically usable as they come. The standard blade front/notch rear is perfectly adequate for most shooters with decent eyesight out to 75 yards and farther, if necessary. Most can be easily adjusted out to 100 yards and used without expensive aftermarket products. If you do want refinements, an aperture rear can help with distances and a white-outline front blade, or a gold bead, can help line things up in darker lighting. Various methods of mounting scopes exist, with Marlins and Brownings being the easiest as they come pre-drilled and tapped for an optic. Indoors, a scope works against you and outdoors it can work for you, but it tends to slow down target acquisition. A good set of iron sights can put you right on target, right now, and that’s important in close-up encounters.

Most classic lever guns use under-barrel tube magazines, from the traditional side-loading Winchester to the “rimfire style” on many .22 lever actions and on the Henry rimfires and centerfires, where rounds are loaded through a port in the forward section of the magazine tube itself. The Browning BLR uses a detachable box magazine. In the most common home-defense context, there’s no real advantage to any of these types since you’re not looking at speed reloads anyway.

In the heavier calibers, consider a good recoil pad, if the new carbine doesn’t already have one. The .30-30 is a fairly mild round for a rifle, but its stock design can punch a shoulder smartly with a solid steel or composite buttplate. Same with the .44 Mag caliber. You’ll get more cooperation in learning and practice from family members if you reduce the “ouch” factor going in. 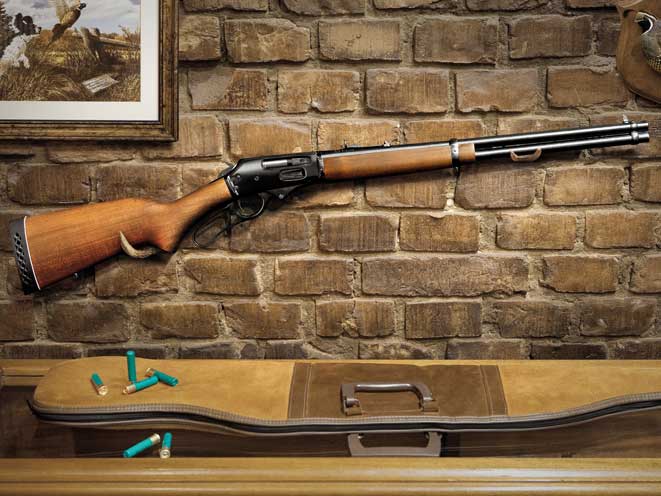 Learn how to work your home with your new lever gun once you make your choice. Take corners wide, where possible. Don’t walk into a room or round a blind corner barrel-first—you don’t know who might be there to grab it. Don’t round a close corner muzzle-up, it’s too easy for an intruder to deflect the barrel or disarm you entirely. Navigate tight corners and doorways muzzle-down, making the gun harder to grab or deflect, and you can simply drop to one knee while pivoting the barrel up and firing if it is grabbed. Remember, the carbine can also make a very effective impact weapon, but make absolutely sure anybody using it understands whatever safety mechanism it may have. Simple, fast, light, reliable and affordable, the lever action still has a place.

RELATED STORY: 15 New Guns and Accessories in the “Old West”