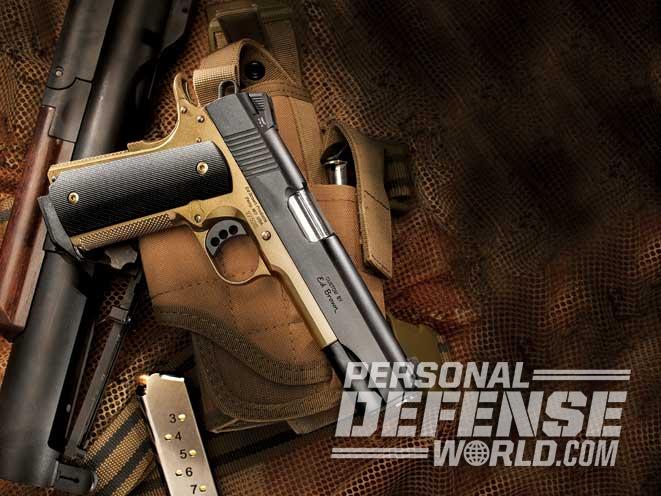 1 of 10
The History and Legacy of the 1911 Pistol
The 1911, including Ed Brown’s Special Forces .45 ACP, is one of the most easily recognized handguns in the world. 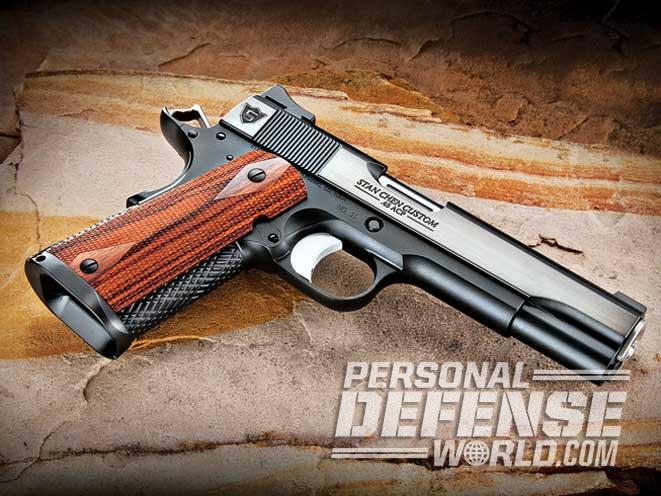 2 of 10
The History and Legacy of the 1911 Pistol
This Stan Chen Custom .45, with its mag well funnel, fluted hood and solid trigger, is just one example of a combat-ready 1911 that is also a work of art. 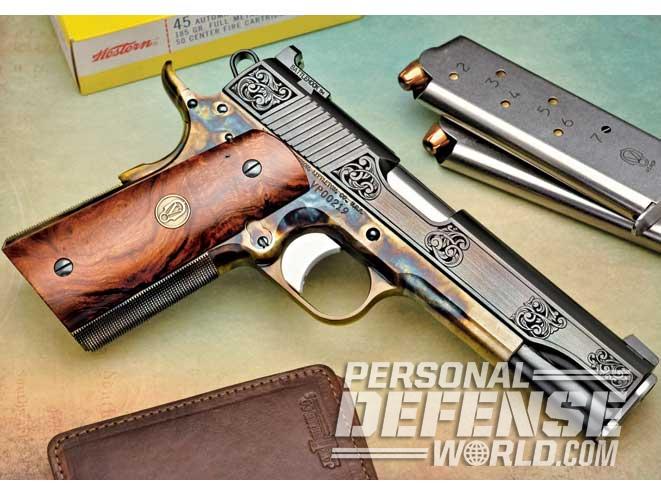 3 of 10
The History and Legacy of the 1911 Pistol
Volkmann Precision can help you obtain the one-of-a-kind 1911 you’ve always wanted. 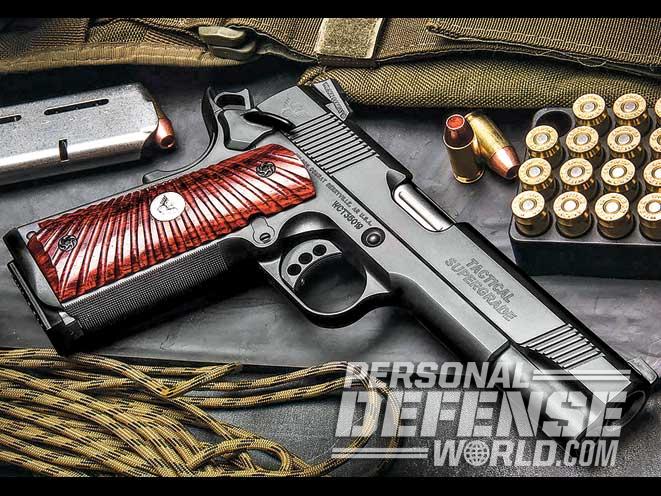 4 of 10
The History and Legacy of the 1911 Pistol
Wilson Combat, one of the first names in 1911s, offers its Tactical Supergrade in many chamberings. 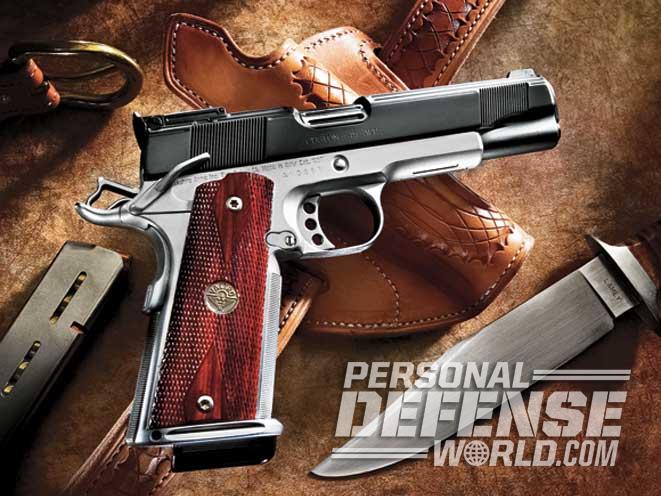 5 of 10
The History and Legacy of the 1911 Pistol
This Jardine’s Custom 1911 features an ambidextrous thumb safety and adjustable sights for upgrades. 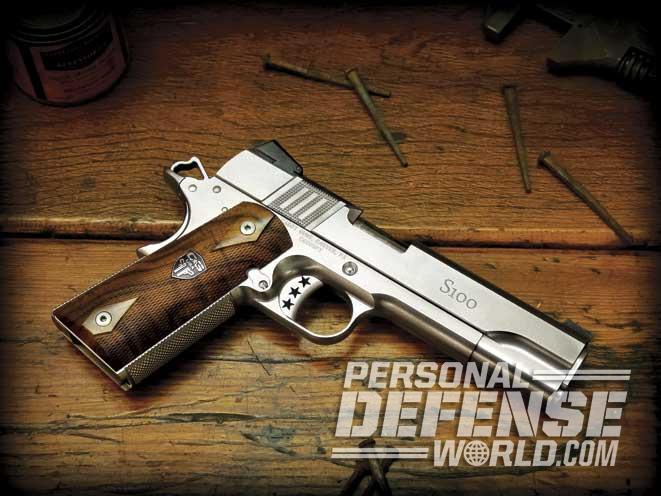 6 of 10
The History and Legacy of the 1911 Pistol
The detailed gunsmiths at Cabot Guns fit their S100 series 1911s by hand for precision fit and finish. Note the star trigger and slide checkering. 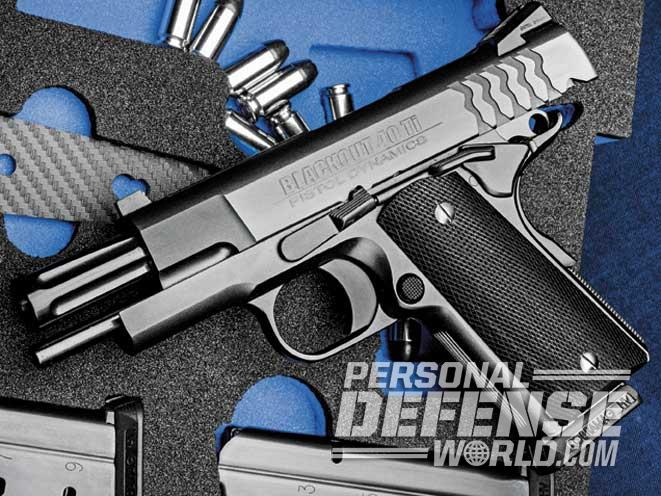 7 of 10
The History and Legacy of the 1911 Pistol
The aptly named Blackout from Pistol Dynamics has a fluted barrel and an all-business finish. 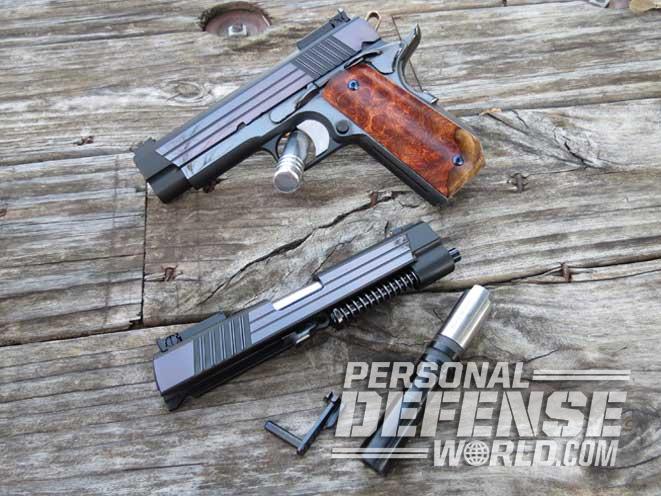 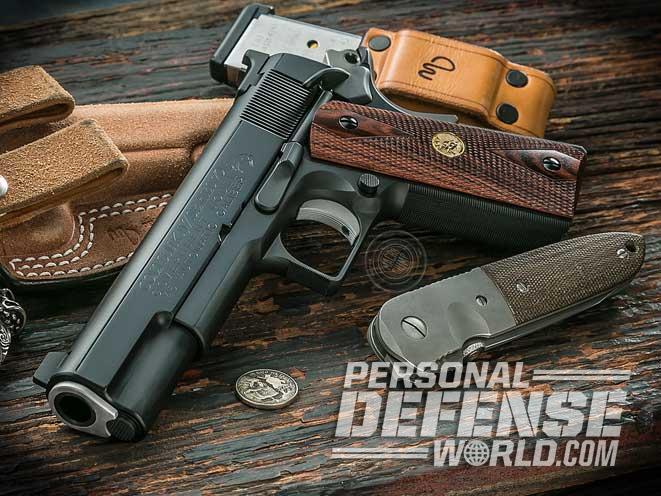 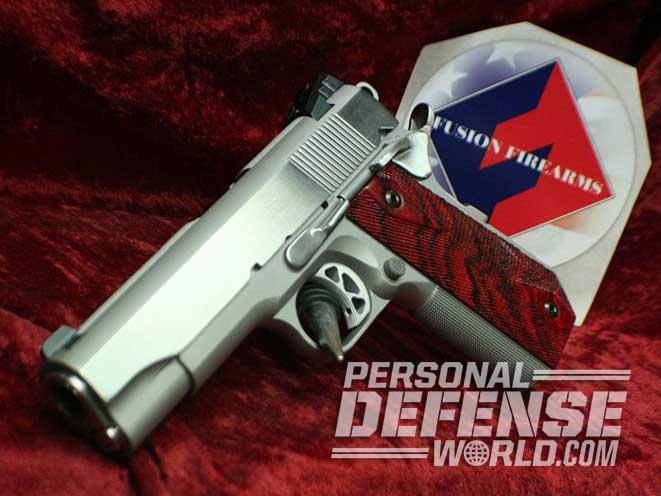 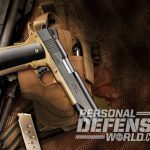 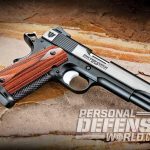 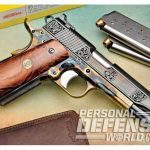 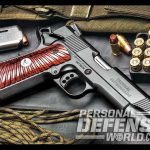 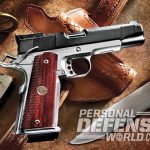 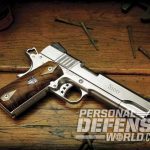 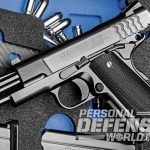 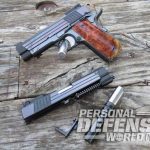 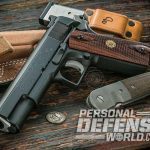 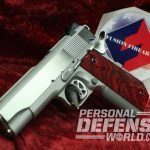 Many handgun designs have come and gone over the years. Several have remained in our minds as special, yet only one is considered iconic. The 1911 pistol designed by John Moses Browning holds that rare space as a reliable workhorse even 104 years after its official release.

While it’s true that there is a sense of nostalgia for this heavy-metal fight stopper, there is more to it than that. The history of the 1911 begins long before the adopted, dated name. In 1898, America went to war with Spain and quickly ended up in treacherous jungle warfare against the Moro tribesmen in the Philippines. While the soldiers’ Springfield rifles were effective, there was a less than enthusiastic response to the issued .38-caliber double-action (DA) revolvers. So much so that the old Colt Model 1873 revolver was brought back into service. These pistols dated back to the Plains Indian Wars.

An after-action review of the combat in the Philippines resulted in the Thompson-LaGarde test in 1904. This was a military testing event that was focused on determining which cartridge was needed for military use. They tested a wide variety of cartridges available at that time and determined that “a bullet, which will have the shock effect and stopping effect at short ranges necessary for a military pistol or revolver, should have a caliber of not less than .45.”

In 1906, the military began evaluating several pistol designs as well as the suitability of the new .45 ACP round. Enter Colt and its submission designed by John M. Browning. After extensive testing, the Browning pistol was officially adopted by the U.S. Army on March 29, 1911, and thus became known officially as the Model 1911. Two years later, the U.S. Navy and U.S. Marine Corps would adopt the same pistol.

The 1911 would see battle around the world and develop a reputation as a trusted friend in dangerous places. Its iconic nature was further fueled during World War I, when the story of Sergeant York stopping six German soldiers with six shots became public. The biggest testing ground, however, came during World War II, when the military put more than 3 million of the pistols into service. From the Pacific to the frozen fields of Europe, the 1911 saw action in every theater of combat. It would continue in service during the Korean War as well as Vietnam. The 1911 continued to see military use until 1985, when the 9mm round was adopted as the primary service round for pistols. But that would not be the end of the 1911.

There are currently over 100 different companies manufacturing versions of the 1911 pistol. Some are custom shops building made-to-order guns and others are full-sized manufacturers that maintain a 1911 line of pistols. The popularity of the 1911 has ebbed and flowed over the years, but there seems to be a bit of a renaissance for this pistol since 2011 and its 100-year anniversary. While some may argue that there has never been a down time for Mr. Browning’s workhorse, it is undeniable that its popularity has grown.

A good example of this can be seen with Remington. In the 1910s, the company produced countless 1911-style pistols for the government. When World War I ended, so did Remington’s production of the 1911. Now, fast-forward to April of 2010, when the company announced that it would once again be producing the 1911. Decisions such as this are not made purely on sentiment and nostalgia. The market for these pistols has grown, and Remington made the choice to get into that market.

While there are several multi-weapon manufacturers such as Remington, there exists a group of gun manufacturers that almost exclusively deal with 1911s. One of the first names on that list is Wilson Combat. Founded in 1977, Wilson Combat has built some of the finest 1911s on the market. Add to that list names like Nighthawk Custom and STI and you can quickly see that the demand for these pistols is still high. The skills required to build reliable and accurate 1911 pistols eclipses most other gun building. Fit and finish are more than catchphrases for serious custom builders. As with any piece of finely made hardware, though, there is a price. While prices run a vast spectrum, a serious custom 1911 can easily run in the $3,000 to over $5,000 range.

The 1911 is unique in the gun world because, in many cases, it is a collector piece as well. With a variety of factors driving price, including rarity, history and condition, prices can vary. Possibly one of the most expensive 1911s ever sold belonged to Clyde Barrow and received a winning bid of over $240,000 at auction.

Some of the factors that make the 1911 a popular gun go much further than the “cool” factor. With a smooth single-action trigger and a heavier frame, the 1911 is an accurate and easy-to-shoot gun. This pistol has also been produced in many versions. From a full-sized Government Model with a 5-inch barrel to the Defender with its 3-inch barrel, there is a wide spectrum of sizes.

One of the early popular modifications, though, was to chamber the gun in .38 Super as a competition pistol. The weight of the frame, the barrel length and a good trigger made it a natural base on which to build a competition gun. We now see the 1911 chambered in 9mm, .357, .22 LR as well as other more interesting calibers. Along with being the most used pistol by the world’s best USPSA/IPSC shooters, the 1911 is also the predominant centerfire pistol format at the Camp Perry Bullseye pistol matches.

While not as prominent in law enforcement and military circles as it once was, the 1911 maintains a presence with some agencies. The Hurst, Texas, Police Department has issued the 1911 as a duty weapon since 1974. The 1911 also sees action with some military units, including the Marine Corps’ MARSOC units.

Another prominent event involving the 1911 occurred in 1993 when two U.S. Delta Force operators, Master Sergeant Gary Gordon and Sergeant First Class Randall Shughart, were inserted into a helicopter crash site in Mogadishu, Somalia. Their story was later portrayed in the book Black Hawk Down. After Sgt. Shughart was fatally wounded, Sgt. Gordon continued to protect the helicopter’s wounded pilot, eventually fighting to the death with his 1911 pistol. It is this type of valor and courage that the 1911 has personified throughout its military and LE service.

The truth of the matter is that the 1911 is a work of art. To the serious gun aficionado, the lines and build of the 1911 call to a time when function and form went together. A well-made 1911 is the product of true craftsmanship. The men and women who are true 1911 smiths are no less artists than any person with a paintbrush. References to the 1911 equate it to a fine car where time and attention were paid in order to create the best product.

But is a 1911 for everyone? That depends on several factors, including your experience with handguns. Undoubtedly, the 1911 is not as “easy” to run as a polymer-framed, striker-fired pistol. The grip safety and thumb safety have caused more than one issue with new shooters. Additionally, the 1911 requires more service than its polymer cousins. While some say a Glock only needs the “thought” of lubrication, a 1911 must be kept lubed. The most brutally honest words on the subject were uttered by firearms expert Larry Vickers. If you want a true measure of how well you would handle a 1911, he states that you should “Take a look at your lawn mower. Do you take care of it or is it set in a corner of your garage covered in grass and dirt?” If it is the latter, then you might rethink the 1911.”

The 1911 is a mechanical marvel. The design, based on John Browning’s 1889 patent, has been a fundamental blueprint or reference point for pretty much every centerfire autoloader produced in the 20th and 21st centuries. Very few mechanical designs have been copied, cloned or referenced as much as the 1911. While not currently seen as a cutting-edge or new tool, the 1911 has secured itself a place in the hearts and minds of gun owners around the world. It’s a classic weapon that has found a new and ever-growing following. 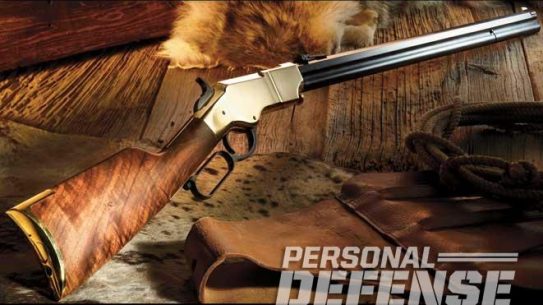 These classic lever-action rifles deliver reliable home-defense firepower when it matters most!