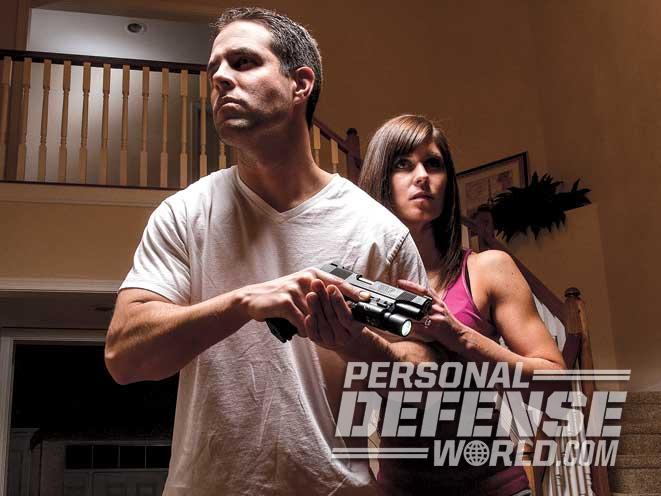 1 of 8
Photo by Sean Utley
Family Man
Two individuals invaded a Fort Wayne, Indiana, apartment in an apparent robbery attempt, but were confronted by the home’s armed male resident. During the confrontation, one of the suspects was shot and killed. The resident also suffered serious injuries and was treated at an area hospital, where he was listed in serious condition. A female resident and child were in the apartment at the time of the invasion, but fortunately neither the woman nor the child was harmed. The second suspect left his wounded accomplice behind and fled the scene. 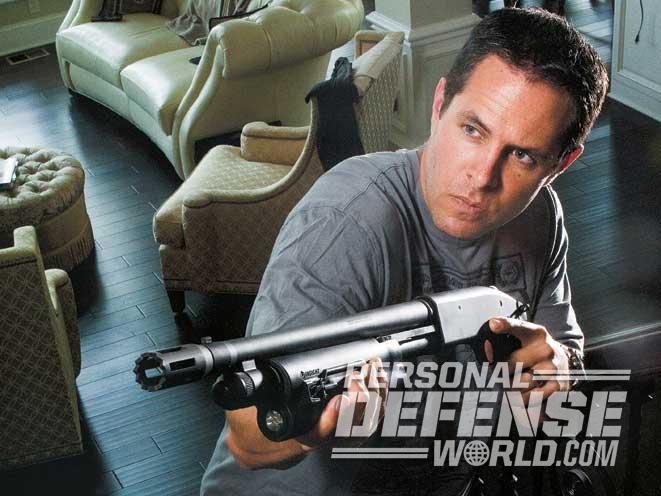 2 of 8
Photo by Sean Utley
Shotgun vs. Four
Home invaders, especially those involved in a well-planned invasion targeting specific items or people, are more likely to travel in packs than are simple burglars. It’s really not rocket science that in such a scenario, the folks in residence can provide a better defense with a gun than they will with pepper spray or a rolled-up newspaper. A homeowner responded with a .410 shotgun when four suspects broke into his home around 11:30 p.m. In this case, refusing to become a victim only required one shot be fired to evaporate the wolf-pack courage of the four invaders, who quickly fled the scene. All four suspects were arrested shortly thereafter by law enforcement and promptly confessed to the crime. 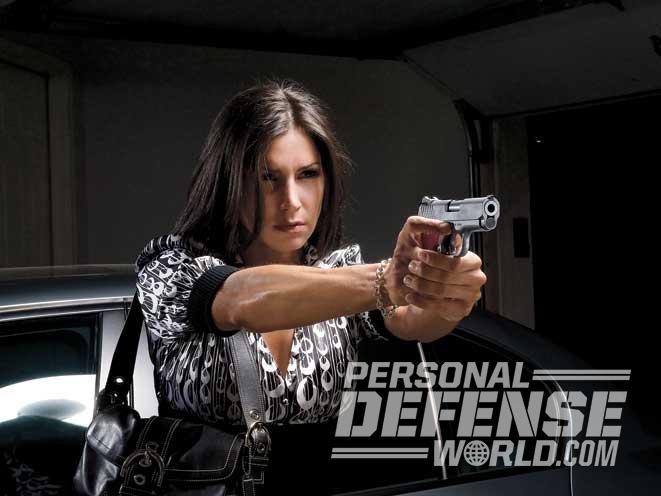 3 of 8
Photo by Sean Utley
Motor City Mama
A Detroit mother of three had just come out of a store when she was confronted by two armed men who started shooting at her in an attempt to steal her vehicle. Fortunately, the woman had a concealed-carry permit, and she courageously returned fire. This scared off the would-be carjackers and probably saved her life. The woman was hit in the left hand and may suffer permanent disability from the injury, but she believes she did the right thing in returning fire. “If I didn’t, I believe they would have shot us dead instead of shooting and running. So I am glad that I did have my weapon.” 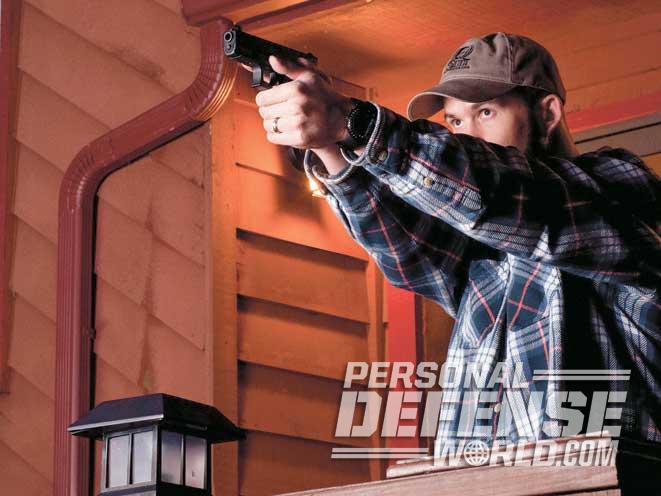 4 of 8
Photo by Darryl Duling
At The Door
A Vermont resident was suckered into opening his door at 1:00 a.m. by a young female banging on the door. When he did, two men entered the doorway and one punched the resident in the face. The apartment resident, having prudently armed himself with a handgun before he unlocked the door, fired three rounds at the men. Both home invaders were hit and ended up in intensive care, but were expected to survive to face various charges once released from the hospital. Police were also investigating the possibility that one of the home invaders was involved in a prior drug-related shooting at another apartment complex. 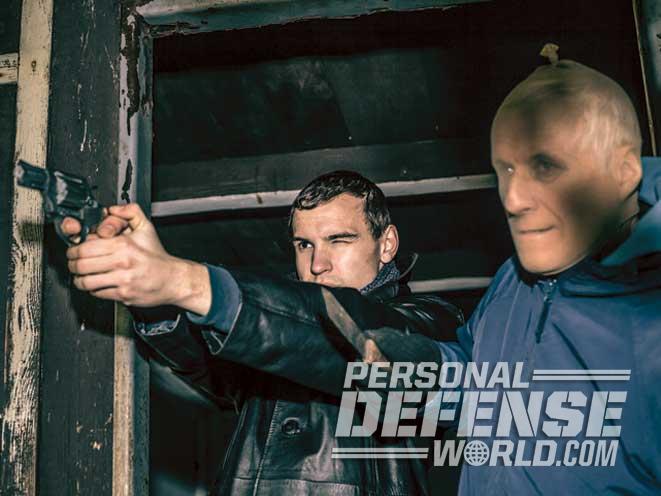 5 of 8
Photo by 123RF
Jewel Of Tennessee
Two men entered a Tennessee jewelry store and accosted the owner. One of the men then jumped the counter and began stealing money from a back room. As the suspect returned to the front of the store, the owner, who is confined to a wheelchair, grabbed a handgun and shot the suspect in the stomach. The quickly responding police were able to apprehend both suspects at the scene. According to the local news, this outcome wasn’t a surprise for local law enforcement. “Everybody has a gun permit nowadays,” a law enforcement official noted. “So, I don’t think it’s safe to assume you’re going to go into a business where there’s not a weapon.” The store owner was not harmed during the incident and the suspect who was shot was listed in stable condition at an area hospital. 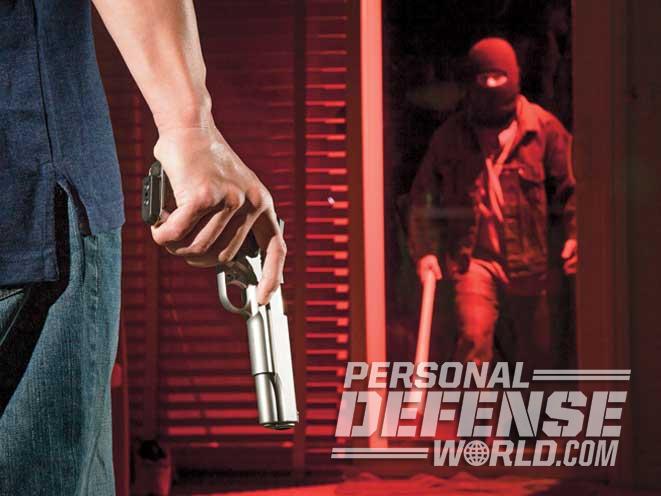 6 of 8
Photo by Alfredo Rico
Close Quarters
Three suspects—two men and a woman, armed with a bat and handgun— invaded an apartment in Florida. One of the suspects was shot when the intended victim fired at the suspected armed robbers. There were three potential victims inside the apartment at the time of the attack, and one of the suspects was known by one of the victims. The attackers tried to leave the complex in an automobile with their wounded accomplice, but deputies apprehended the three in the parking lot. 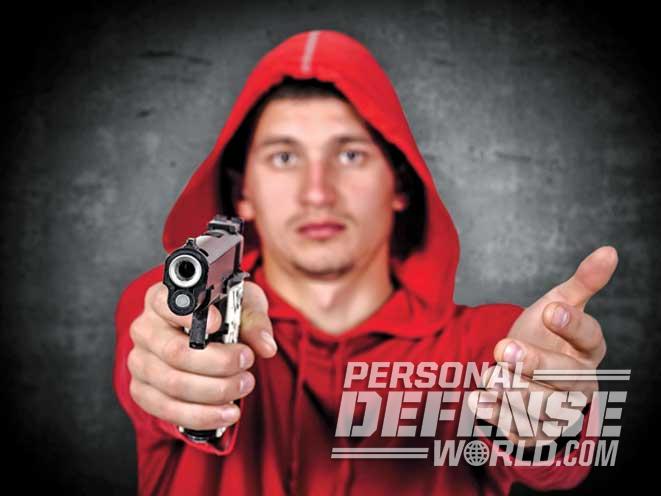 7 of 8
Photo by 123RF
Dealership’s Final Offer
The proprietor of a Texas auto shop and car dealership says that if it weren’t for his gun and his decisive action during an armed robbery, he might be dead, along with the dealership’s employees and customers. Two armed men entered the Houston dealership with guns drawn, demanding money. As shown on security tape, they pointed their guns at both employees and patrons. The business owner saw the armed suspects running through the parking lot toward his front door, and he quickly came out of his office to confront the suspects with his own gun in hand. A short gunfight ensued, with the proprietor fighting off the suspects, who fled the scene in a grey car. One bystander at the dealership was hit by a stray bullet and suffered minor injuries. The dealership’s owner took him to a nearby clinic for treatment before emergency responders could show up. 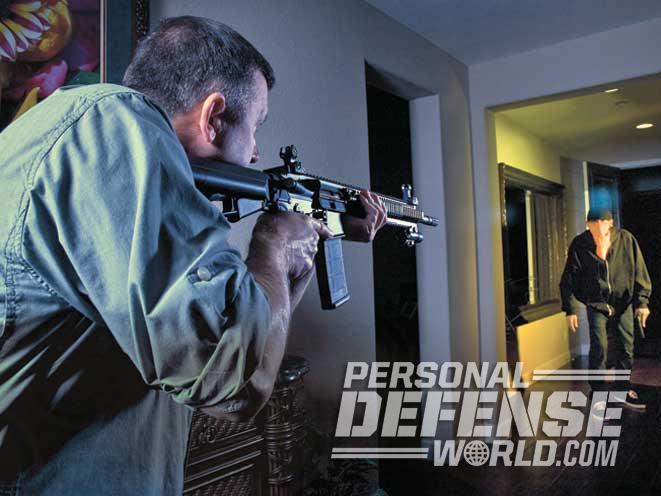 8 of 8
Photo by Alfredo Rico
Hubby’s AR
A husband and wife were talking outside their apartment when a man walked up and stared at them for several minutes. Finding this unsettling, the couple turned to go back into their home, but the man jumped between them and forced his way into the apartment. The husband quickly secured an AR-15 from inside the apartment, drew down on the man and told him to leave. When the suspect approached the husband in a menacing manner, ignoring several commands to stop, the husband fired one shot into the chest of the intruder. The residents immediately called 911. The suspect was pronounced dead at an area hospital. Police say the residents did not know the intruder and the rifle was legally owned by the resident. The intruder was currently awaiting trial for assault in an unrelated incident. 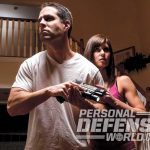 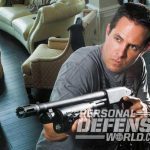 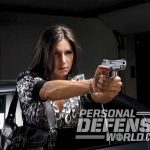 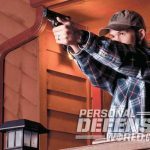 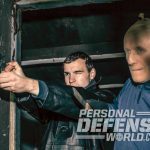 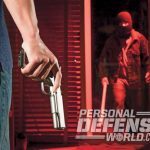 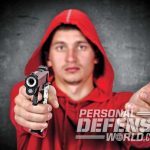 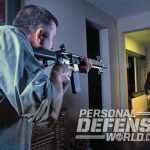 Studies have consistently shown that firearms in the hands of law-abiding citizens are not only an immediate lifesaving tool for individual victims, but overall are deployed more than two million times a year for personal defense of the innocent, thus serving as a strong deterrent to crime. In a good proportion of these instances, the mere presence of a means of lethal self-defense has deterred an attacker without a shot being fired. Scroll through the gallery above to read about eight true-life cases where an armed citizen defended him or herself against a violent attacker.

3 Ways To Fight Back Against An Attack

10 Strategies For Living Your Life In Condition Yellow

10 Everyday Weapons to Use for Self Defense

Massad Ayoob’s Tips and Tactics for Staying Alert and Aware 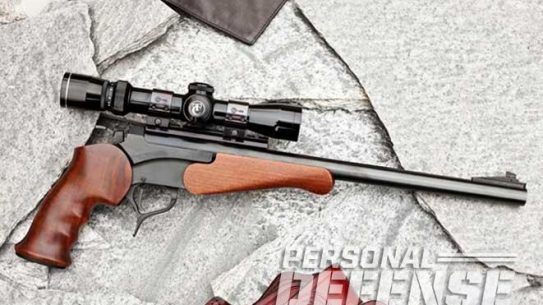 If you want to try your hand at hunting with a handgun, the Thompson/Center...