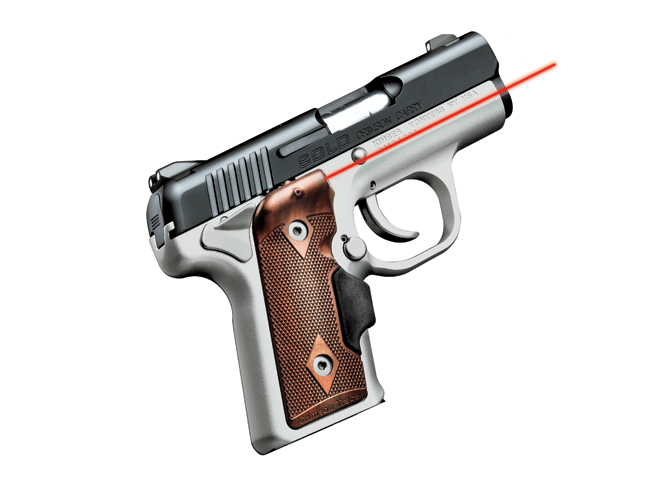 1 of 10
Kimber Solo Crimson Carry
The Kimber Solo Crimson Carry has a black, Diamond-Like Carbon (DLC) coating on the stainless steel slide and a satin silver KimPro II finish on the aluminum alloy frame. The Crimson Trace checkered, rosewood-colored Lasergrips add a new defensive edge to the Solo for low-light situations. The gun comes standard with a six-round magazine. An eight-round magazine with an extended grip is also available. 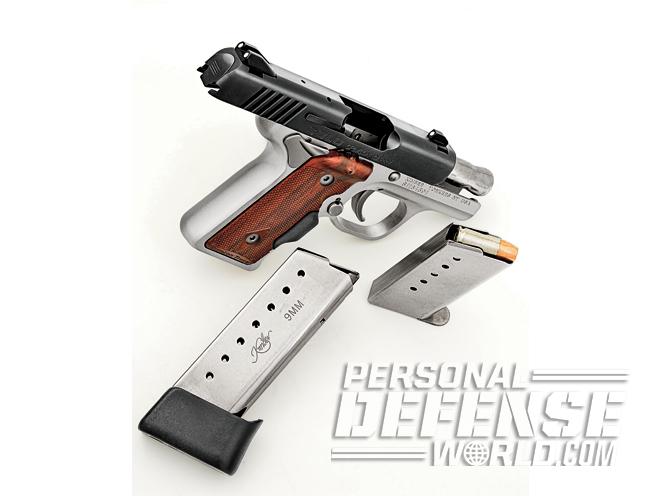 3 of 10
Kimber Solo Crimson Carry
The Solo is 3.9 inches tall with the six-round magazine. The extended, eight-round magazine increases the height by 1 inch.

4 of 10
Kimber Solo Crimson Carry
The ultra-compact Solo Crimson Carry is only 1.14 inches wide including the ambidextrous thumb safety. All edges are nicely rounded to prevent printing through outer garments and speed up your draw. 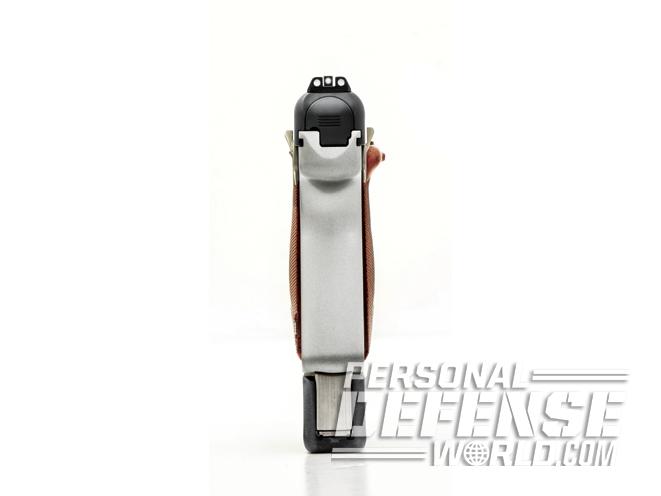 6 of 10
Kimber Solo Crimson Carry
“This is one of those rare guns that you pick up and know, almost instinctively, that it is going to be good.” 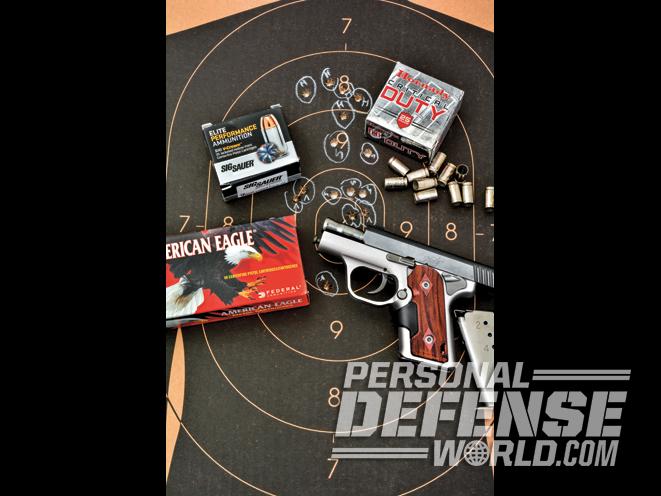 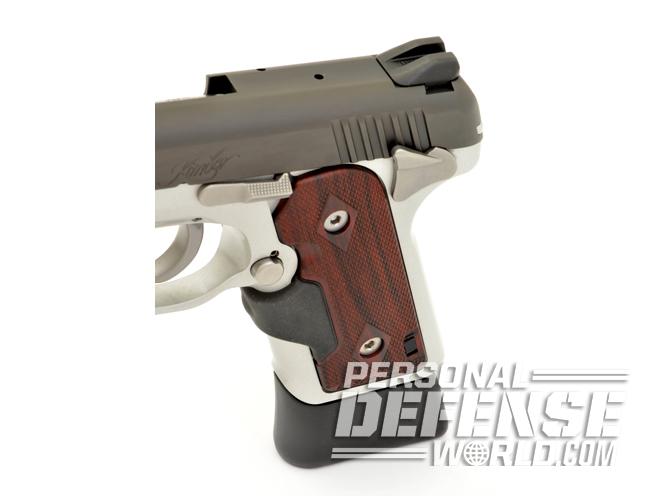 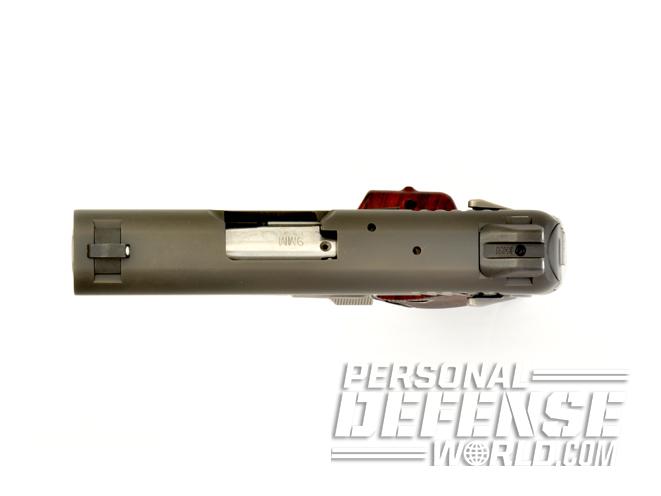 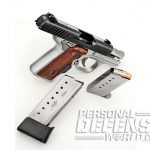 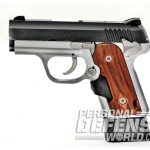 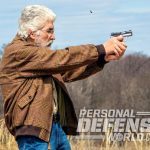 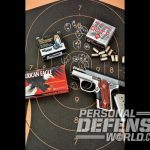 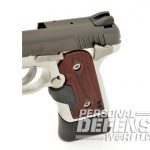 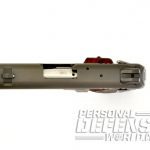 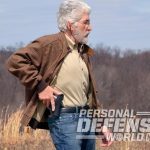 The Kimber Solo has established itself as one of the leading 9mm subcompacts with its no-compromise, all-metal (alloy and steel) build, its familiar, intuitive operating features and a size that defines the 9mm pocket pistol category.

A mere 5.5 inches in length, 3.9 inches in height and a scant 1.14 inches in width, the Solo weighs only 17 ounces unloaded. It is, within fractions of an inch, the same size as the Colt Mustang, the Sig Sauer P238 and the Kimber Micro Raptor .380 ACP models, making this one of the most compact 9mm semi-automatic pistols on the market.

Over the last four years, the Solo has established itself as a hard-hitting 9mm pistol with a standard complement of 6+1 cartridges, or 8+1 with an extended-capacity magazine that also increases the length of the grip by a full inch for a more secure grasp. Since the Solo is just slightly larger than a .380, building a micro 9mm pistol suitable for pocket carry or very discrete holster wear demands cutting some corners—not in quality, but literally the corners of the gun.

Since its introduction in 2011, the Solo has not been surpassed for compactness or ease of carry by any other 9mm. Still, when you pick up the Solo, it is not too small, nor is the safety, magazine or slide release reduced in size to the point of being awkward. In fact, the ambidextrous thumb safety is remarkably easy to operate. Its unusual “V” shape is angled to be easily activated by the side of the thumb on the draw and the reset. The V-shaped form actually reduces the effort required to work the safety while still being quite small and having a positive detent when set or released. The angle and rounded corners also make it less likely to catch on clothing, particularly when drawing or reholstering.

The Solo is built to handle ammunition in the 124- to 147-grain range, which is pretty much what you want for defensive use. As might be expected, the little 17-ounce pistol has a commensurate kick. It’s nothing that isn’t manageable or detrimental to maintaining accuracy (with practice), but this is no lightweight. The addition of the Crimson Trace Lasergrips, made especially for the Solo in a distinctive diamond pattern with a rosewood finish, takes the gun’s accuracy up another notch, with pinpoint accuracy out to 21 feet in moderate daylight and easily up to 50 feet in low indoor light or nighttime situations.

For me, operating the laser activation switch on the frontstrap took a little extra effort, because the frame contours on the gun are so smooth and rounded that the activation button built into the Lasergrip is quite shallow. My solution was to apply added pressure from the support hand, to keep more force on the strong hand’s middle finger and send that brilliant red beam downrange. As for accuracy with the Crimson Trace Lasergrip, five rounds fired from 7 yards at dusk struck the target at a measured spread of 0.875 inches! That’s better than I could do with the pistol’s excellent white-dot sights in broad daylight.

Like every Solo model since 2011, the look of the 9mm Kimber Solo Crimson Carry is exceptional, from the scalloped ejection port, to the lower edges of the slide (that curve inward ahead of the frame, creating soft, visually appealing contours that add a small advantage when reholstering), to the triggerguard’s broad, rounded shape. Another feature of interest is the ambidextrous magazine release. It is smoothly integrated into the frame, and though requiring moderate effort to activate, is very positive in operation and sends the empty magazine easily out of the pistol’s grip.

While the Solo certainly takes its basic design cues from the Colt Model 1911, the only real approximation is the grip angle. The Solo is a striker-fired design with a pre-tensioned trigger. When the slide is cycled and a round is chambered, the striker is pre-tensioned to between 88 and 90 percent, thus trigger pull, which is still substantial for safety, averaged 7.6 pounds on the test gun, requiring just 10 to 12 percent of total trigger-pull effort to stage and release the striker. It is a long trigger pull, measuring half an inch with zero overtravel and almost instantaneous reset for quick follow-up shots.

The Kimber Solo was designed for concealment, including its trigger and action. The designers wanted a modern, striker-fired action, thus the absence of a 1911-style hammer and grip safety. There is only the ambidextrous thumb safety for secure carry. The trigger’s design is DAO, but without a second strike capability, and there is no way to decock the gun once a 9mm round is chambered.

While a gun like the Solo is most apt to be used in close-quarters situations of 15 yards or less, the gun is designed to deliver exceptional accuracy at 25 yards, despite its short 2.7-inch barrel. Ruggedly built to handle self-defense ammunition, my choices for the test were a mix of traditional 115-grain full metal jacket (FMJ) manufactured by American Eagle, Sig Sauer’s Elite Performance V-Crown 124-grain jacketed hollow point (JHP) and the heavy-hitting Hornady 135-grain Critical Duty.

Being a short-recoil design, one expects the Solo to have quite a kick, but it is actually less than anticipated. However, with its aluminum frame and stainless steel slide, it’s not gentle. Make no mistake, this is a 17-ounce, 5.5-inch-long pistol spewing out high-velocity self-defense ammo from a 2.7-inch-long barrel. Federal’s American Eagle 115-grain FMJ clocked the fastest times through my ProChrono chronograph at 1,086 feet per second (fps) average, with Sig Sauer’s 124-grain V-Crown load just a step behind at 1,031 fps, and the heavier 135-grain Critical Duty clearing the traps at 973 fps.

The standard magazine holds six rounds and requires a solid push when being inserted. Pulling the slide back to chamber the first round (or clear the gun) also demands a strong hand due to the Solo’s heavy double recoil spring required for pre-tensioning of the striker. This is the most physically demanding aspect of handing the gun.

The overall dimensions fit the average hand comfortably with the small finger nested under the magazine floorplate. The magazine and slide release fall easily in hand, operate smoothly (particularly releasing the slide after inserting a fresh magazine), and the ambidextrous safeties work seamlessly. The best five-round group came with the Critical Duty, which placed five rounds at 1.75 inches and had its best three rounds measuring just 1.25 inches. Sig Sauer spread five rounds at 2 inches with three measuring under 1 inch. The least accurate was the light-recoiling Federal load, which spread five rounds over 3.2 inches. But that included one flyer hitting low in the 9 ring at 6 o’clock, which busted up an otherwise impressive 2.25-inch spread for four rounds.

From a distance of 7 yards, every shot fired struck 9, 10 and X rings of a B-27 silhouette target (with the exception of the Hornady Critical Duty, which was deliberately fired POA at the top of the 8 ring to have a clean target area). Testing the laser just before dusk, five rounds fired at 1-second intervals landed at POA in just under 1 inch. There is no doubt that in a tough situation, the laser can really make a difference with the Solo. It is probably the best option possible for this pocket-friendly gun.

The Solo Crimson Carry almost disappears in a pocket and is easy to carry on a belt or paddle rig (like the Galco/Kimber paddle holster shown), so concealment is not a question; it is a given. Capacity is pretty standard at 6+1, unless you want the longer magazine and grip length for 8+1 rounds. Either way, this gun goes off sharply; there is a swift muzzle rise and then the Solo is ready to go again.

The action of any short-recoil, striker-fired pistol is remarkably fast, but the Solo is faster. This is due in part to the unusual contours of the barrel, which has, for lack of a better explanation, a Coke-bottle shape to improve barrel oscillation. As it moves rearward after discharge, the contoured barrel locks dramatically in a very short distance—just 1.5 inches.

The Solo is known for its smooth function, with jams or failures to feed or extract being extremely rare. During the range test, there were none. The Solo remains one of those rare firearms that sports exceptional styling, reliable operation and almost impossible dimensions for the caliber. The Solo Crimson Carry is not for the weak of wrist or faint of trigger finger; it is a gun ideally suited for the practiced shooter who demands reliability, accuracy and, above all, concealment in the internationally recognized 9mm caliber. This is one of those rare guns that you pick up and know, almost instinctively, that it is going to be good. The MSRP for the Solo Crimson Carry is $1,073. 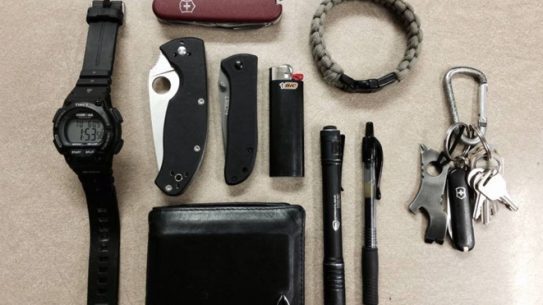 A solid everyday carry kit will help you be prepared for whatever life throws...