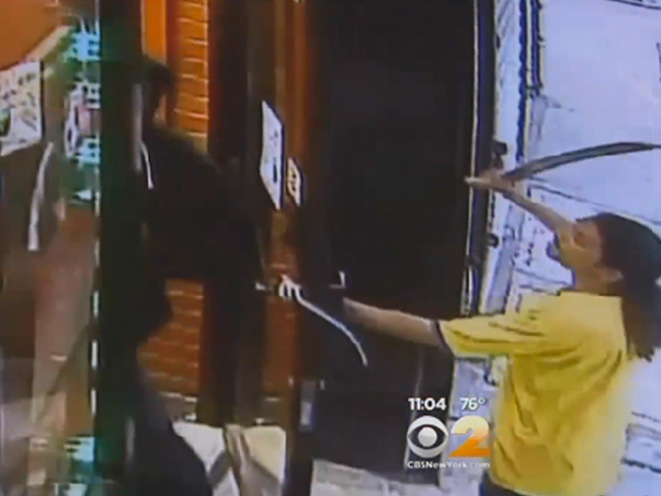 An attempted armed robbery at a Brooklyn bodega quickly went south for the suspect when the store clerk pulled out a machete.

According to the New York Daily News, a man entered Stanley Convenience Store on 669 Stanley Ave. at round 5:30 a.m. Saturday morning. Store security footage shows him brandishing a gun at the clerk, later identified as 38-year-old Bidel Elmontiher.

The suspect forced his way behind the counter, where he stole $700 and two cartons of cigarettes. He then headed for the back of the store, which is when Elmontiher took matters into his own hands.

Elmontiher quickly grabbed a machete from under the counter and sprinted to the front of the store. In the security footage, he can be seen running outside, swinging the machete at a rope used to keep the door open, and then holding the door closed while the armed suspect tries to get out.

The suspect pulled out his gun and opened fire through the glass door.

“He took his gun and just shot (at) me,” Elmontiher told the Daily News.

The bullet missed the clerk, but it hit a 47-year-old security guard at a construction site across the street in the thigh.

Elmontiher fled the scene and the suspect used his bike to escape.

The security guard was transported to Brookdale Hospital to be treated for his non-life-threatening injuries, CBS New York reported.

Police are still looking for the suspect, who is described as a a black male, 35-45-years-old, 6’3″ and weighing 270-lbs. He was wearing a black hooded sweatshirt at the time of the incident. Anybody with information can contact the NYPD Crime Stoppers Hotline at 800-577-TIPS, or by going to the Crime Stoppers Website at https://www.nypdcrimestoppers.com or by texting their tips to 274637(CRIMES) and entering TIP577. 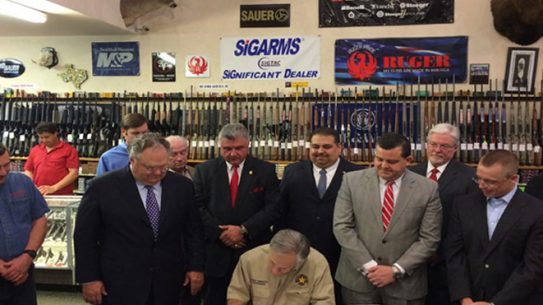 Open carry and campus carry are officially coming to the Lone Star State in...